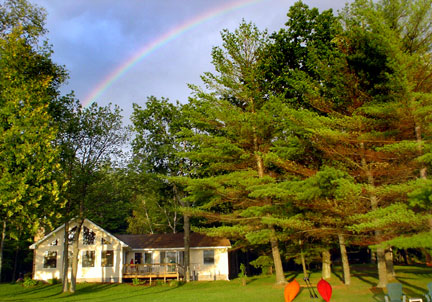 This is the place. Nothing too fancy. This is the view from the lakeshore. Our Wilderness System Pungos are waiting for the next paddle. My aunt and I were peddling back from near the narrows, on the paddleboat, when it started to gently rain. As we were almost home, we saw it. The arc of a great rainbow framing the cottage. And, above it, a faint but definite visual echo of the rainbow. This is Michigan, folks. Rainbows aren’t all that frequent. Doubles are rarely seen. If you look very close, in the corner of the porch, you’ll see a small figure in a red sweatshirt. That’s my mom Clare. This was her last weekend on Long Lake. It was the fall of 2008. She died a few months later in early December, after a brief illness. This is the Clare who taught me to knit. The Clare who sewed 15 years of Halloween costumes for Dan and most of her four granddaughters. She was on an exercise bike at the hospital rehab center on Tuesday and died on Friday surrounded by her sister, her sons, and me. So this is a special photo in a lot of ways. She was a good woman and we miss her. It was a beautiful double rainbow day.

1 thought on “A Double Rainbow Day”