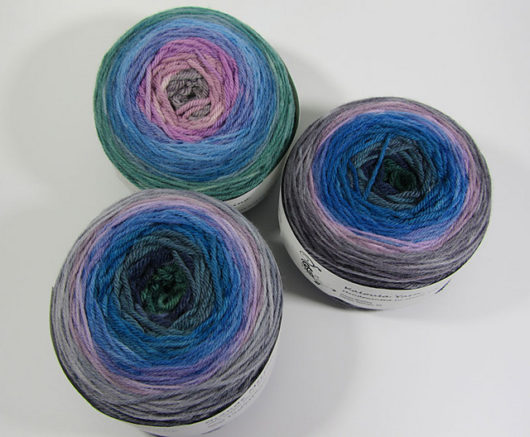 This beautiful yarn is Karen Bradley’s hand-dyed Kaloula Yarn in her Grand Merino worsted weight. I found it once, late in 2012, at Knit Michigan. That’s a cancer benefit smallish yarn meet-up in the Detroit area. My eyeballs were dazzled by this yarn. But later it was hard for me to find a pattern that would suit. Even though these three skeins are all one colorway, the colors aren’t evenly disbursed or even all represented in each skein.

I searched Ravelry’s database and decided I’d knit a rustic shawl with an unusual construction: the Portuguese Fisherwomans shawl. It’s a Vermont Designs by Shelagh pattern. At that point, Shelagh Smith’s pattern was still downloadable from vtyarnco.com. (The pattern isn’t available anymore and, of course, I have no permission to share it or copy it and since I want to keep it in my library I can’t give it to anyone either.)

It’s a pretty thing, hanging there on the hanger. And I feel as if I did the yarn justice with my pattern choice. 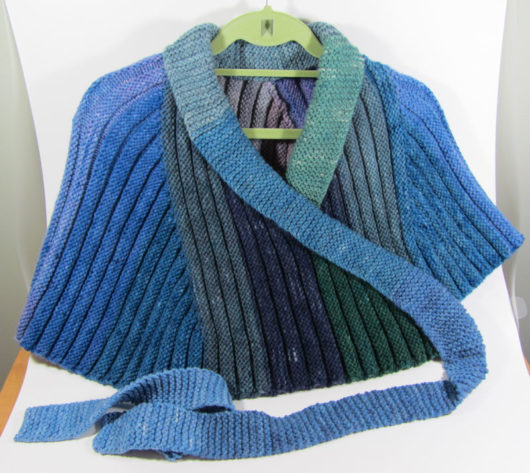 The lengths of color worked out nicely. 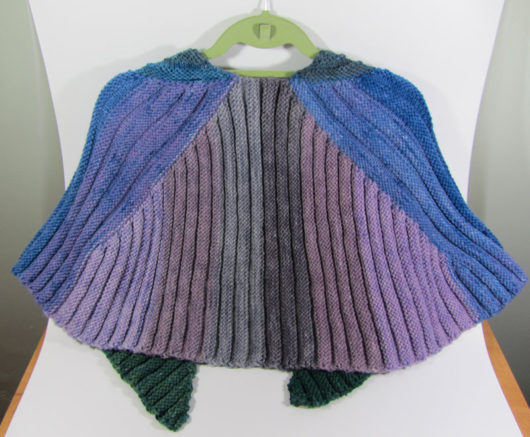 Knitting that long garter stitch band and sewing it on wasn’t easy for me. I wore the shawl, a bit. Around the house. Where no one could see me in it. Knowing where all the mirrors in my house are located, I could easily avoid them. Steve knew his job was to answer the doorbell while I scampered out of my fisherwoman’s costume. Taking nothing away from Portuguese fisherwomen, they must go for warmth rather than style. Or else their body type isn’t portly (being charitable to myself) or buxom.

In 2018, I decided the shawl needed to be frogged. (“Rip it…rip it.) The yarn was just too special to see light of day so seldom. I ended up with about 1100 yards of yarn. Just for the fun of it, I wound it up all in one ball. It was so big it wouldn’t fit in my yarn bowl. It was as big as a small watermelon.

Then I went shawl/wrap pattern shopping and came up with a new Susan Mills pattern: Licola. You might want to click away to Ravelry now and take a look at Licola as Mills envisioned it. It’s supposed to be knit in 4 colorways of worsted and to end up in alternating striped rows. That would have been lovely. But, well…I had my Kaloula Yarn. 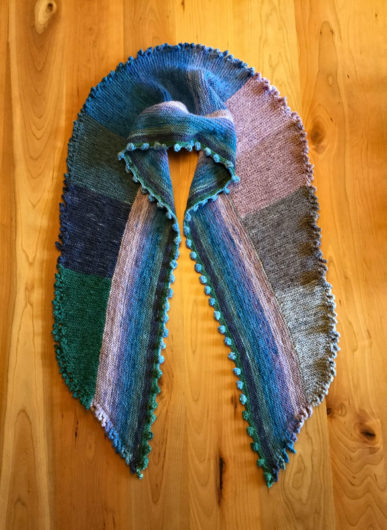 I just couldn’t be happier with how this turned out! Without any planning at all on my part, the bobble bind off even turned out to be mostly in shades that stand out from the rest of the shawl. Some who’ve knit Licola don’t care for the rustic knitted fringe. It’s created by casting on stitches at the start of a row and immediately binding them off. It’s one of my favorite features of this wrap.

Here’s another look at Licola. 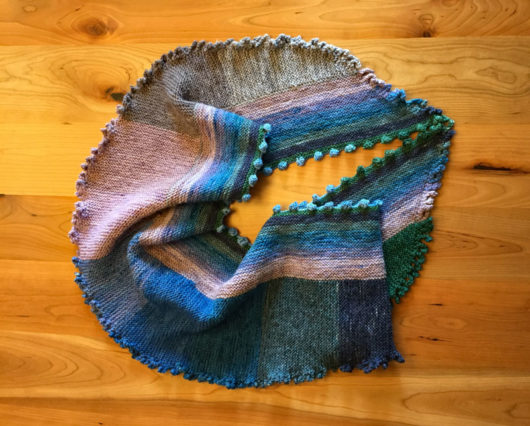 I had enough left to knit a new Sunrise Side Bear. This bear is my freebie donation to the knitting universe. So far ten knitters have posted their projects on Ravelry and about 1200 people have downloaded the pattern. I’m pretty geeked about that. You can read more about my one-seam, knit flat bear pattern here.

This guy is my Kaloula Sunrise Side Bear. 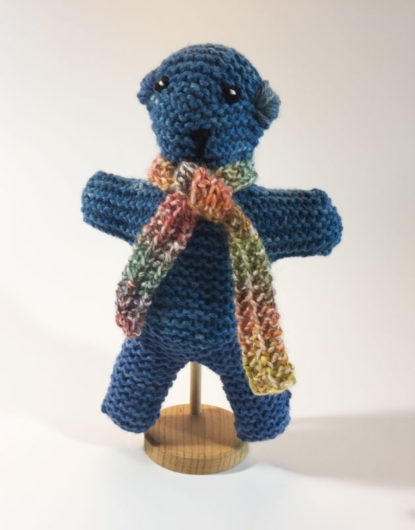 My Ex-Portuguese Fisherwoman’s Shawl was the gift that kept on giving. I even had enough left to complete my 5th pair of Fetching mitts, by Cheryl Niamath. 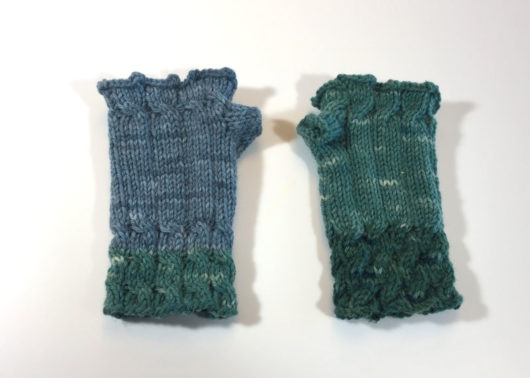 Ok. So you doubt my decision to frog the Portuguese Fisherwoman’s Shawl? Here’s me wearing it. And since then I’ve gained weight–which wasn’t enhancing the look. The ends of that long garter stitch band criss-cross your back and then pull forward to tie at belly button height. I hid the knot under the top flap. 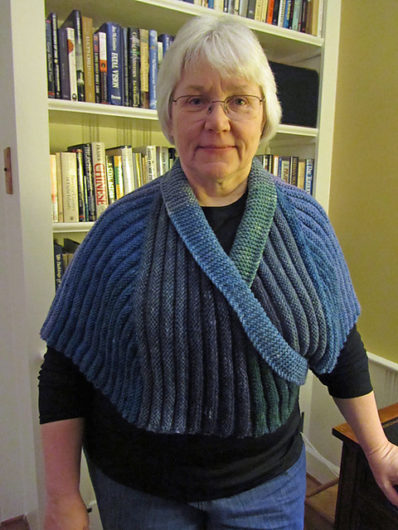 Licolo works so much better for me. Here’s another view of it 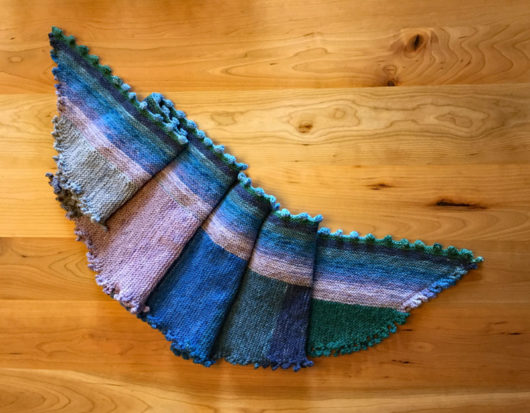 2 thoughts on “Frogging your knitting”