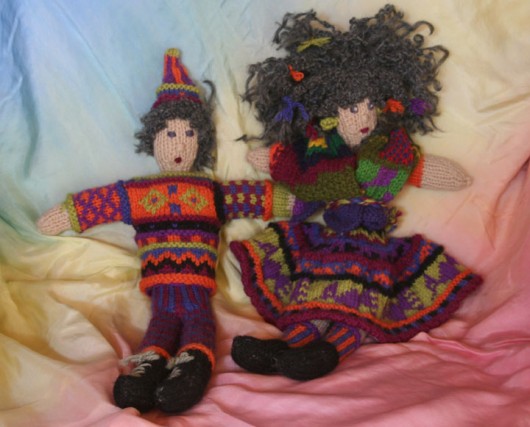 This was a Classic Elite pattern from about twenty years ago that I knitted almost that long ago.  It might have been called “Ethnic Dolls.”   I adapted the pattern for the girl, somewhat, and ended up with sort of an ethnic version of Cher.  Her buddy, well, he’s truer to the pattern and looks pretty goofy.  Mostly I think it’s the hat that doesn’t really flatter him.  As I recall, the work was fun but a bit too fiddly.  And the stuffing, well that was a bear.  I always stuff my dolls and creatures with unspun wool, which is easier to work with than polyester fiber-fill, but the spindly arms and legs were tough to stuff.