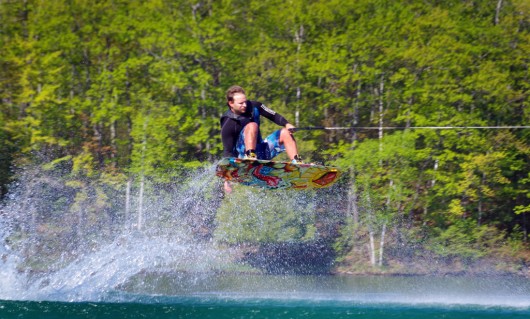 This is Nick. (And yipes, if it isn’t, somebody quick set me straight). Nick is the best water boarder on the lake. Water boarding makes his sport sound like torture. It would be for me, but Nick doesn’t seem to think so. Wake board. This is wake-boarding.

Nick is jaw-droppingly cool to watch. He speeds around the lake, jumping over his speedboat’s wake and tapping the underside of his board before landing (as in this photo), or hanging on to his tow rope with one hand and waving hello to the awe-struck. He twists, turns, and inspires.

Nick is devoted to his sport. He is often out in the early morning before the potatoes, excuse me the tubers, get started. His boat’s driver, usually Mrs. Nick I believe, is always courteous and watchful around us unpowered boaters.

Nick will be the first person on the water in the early spring and the last one off the water in the late fall. We sometimes are out in our kayaks earlier and later, but face it, we aren’t getting wet and we aren’t working hard. We’re sipping our morning coffee in Ghost Bay. Or floating around hoping to spot snapping turtles.