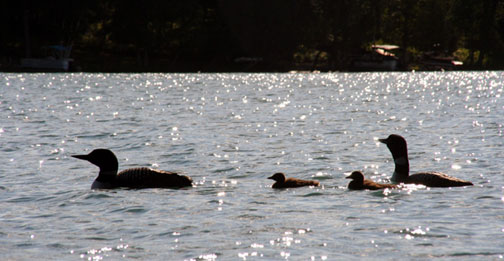 For each of our first two years on the lake, the loon couple that nests on what we’ve nicknamed “Belly Button Island” raised two chicks. This is the Summer of 2008 family.  We watched them from April to October, often at close range in our kayaks.  The chicks were born at the end of June.  Sometimes we could be floating nearby, figuring we should keep a respectful distance, when the loons would swim toward us to as close as about 8 feet.  We’ve seen the chicks riding on their parents’ backs and, as here, paddling along in a family group.  We’ve heard the adults suddenly sound their alarm calls when a bald eagle circles overhead.  We’ve seen the adults stash the chicks in Ghost Bay while they visited with other loons near the island.  At times like that we hope the big snapping turtle isn’t hungry.  The attentive parents feed the chicks all summer long, but the chicks fish on their own from fairly early on also.  We’ve fretted when the parents leave in September for their migration, leaving the adolescents alone for another few weeks.  And then, the lake goes silent.  To hear what it sounds like living on a lake that loons call home, click here.