There’s a pair of loons in lower Long Lake. There’s another pair with some activity on the northwest side of Belly Button Island–where the loons have been nesting the last few years.

The pair in the lower lake were about 30 feet apart when Steve observed a lot of sprucing-up going on. They were nibbling at their feathers–which is a loon’s way of getting rid of any damaged ones. In between nibbling and preening, they would submerge and splash like crazy. That “bathing” activity gets rid of the preening debris.

Then some behavior started that seemed partly aimed at each other in addition to personal grooming. There was a good deal of shaking and stretching going on. Oh and, as above, imitating the Pillsbury Doughboy‘s belly. 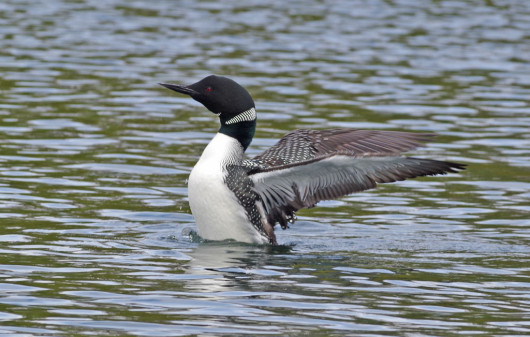 When a loon rises out of the water and shakes itself, it’s getting rid of trapped droplets and getting its feathers all nicely smoothed out. Wing stretching like this often ends a bath and preening session. This loon does look mighty fine. 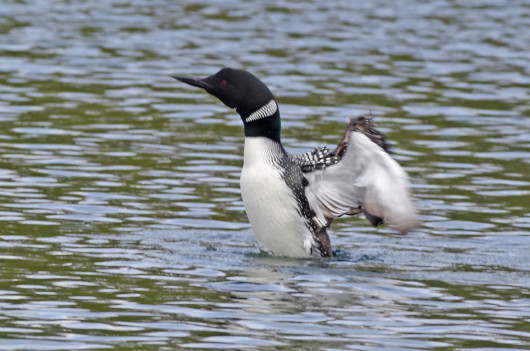 With this loon’s mate so close by, we wondered if maybe this was also part of re-establishing the pair’s bond. Unless the nests repeatedly fail, loons keep the same mate for many years and sometimes for life. But there isn’t any evidence that they migrate or winter together. So it could be that it was the human equivalent of a long, lonely winter. 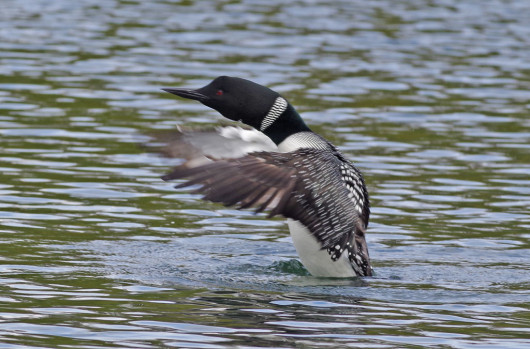 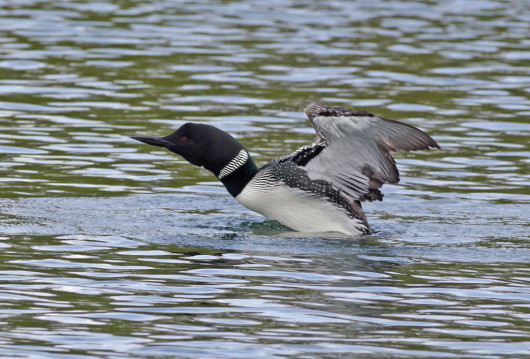 We’re so pleased that the loons have decided to live on Long Lake again this summer. One nest will likely be on the island across from the public access. The other looks like it will be on the northwest side of the big island a/k/a Belly Button. Our local Loon Ranger will have a sign up on the big island soon. Let’s be sure to respect the loons’ nesting area. If all goes well, by around Father’s Day we’ll see the loon chicks riding on their parents’ backs.