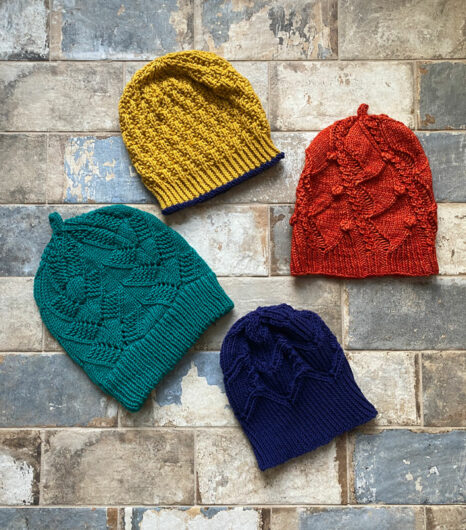 I don’t get a kick out of this abused word, but I’ll use it anyway: I am obsessed with Maria Socha’s hat patterns. Obsessions are mostly over-discussed by HGTV people talking about patterned tile or brass cabinet pulls so maybe I can be forgiven. In the last few weeks I’ve been knitting Socha’s hats and having a wonderful time of it. 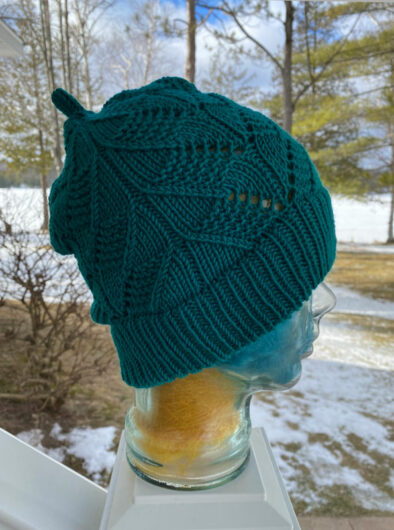 This is Dumka. I wanted the stitch pattern to show very clearly so I knit mine in Plymouth Yarns’ Worsted Merino Superwash. Socha lives in Poland and I was curious about the meaning of “dumka.” It sounds a bit like an insult-word, but I was sure I must be wrong. Indeed. Very wrong. A “dumka” is a piece of music in a melancholy style. In other words, a lament.

Dumka’s brim is double thickness one-by-one ribbing. So this hat will keep ears nice and warm. The wearer will not be lamenting any cold ears. And the topper is I-cord, knit from the last stitches of the crown decreases. 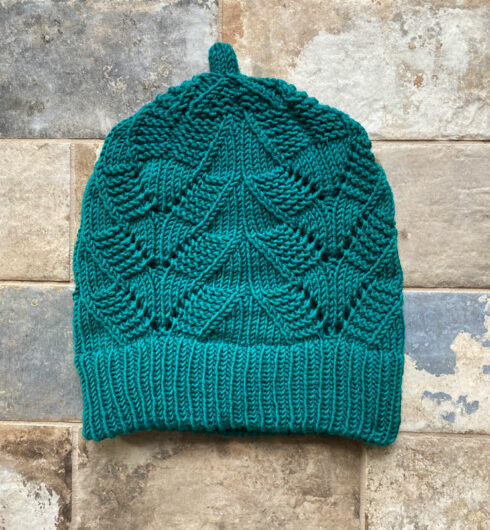 As the pattern directs, Dumka benefits by a good soak and a gentle flat blocking to open up the stitch pattern a bit.

Check out the beautiful crown decreases. 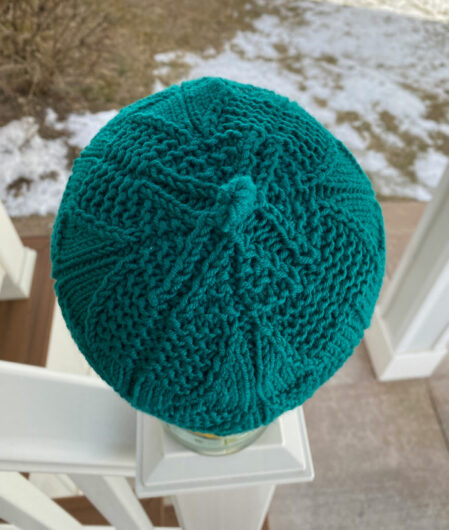 Such an excellent hat!

Socha lives in Szczecin, Poland. She says she’s “just an ordinary woman who loves to knit.” and hats are her “favourite” thing to knit. It shows. Her hat patterns are stunning. This next one is more simple than Dumka, but not simplistic. It’s Jey. 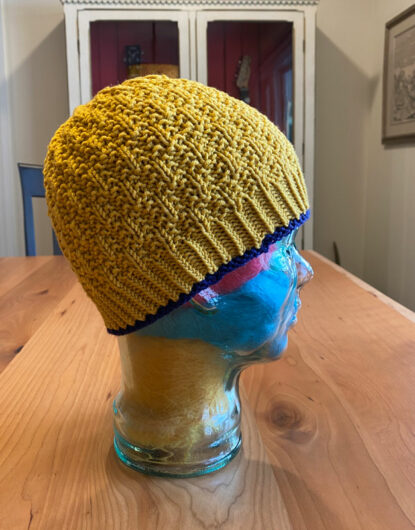 I used the same Plymouth yarn as in Dumka. Jey is an excellent, comfortable, unisex hat. The contrasting cast-on sets off the hat perfectly. And check out the wonderful pinwheeled crown decreases. 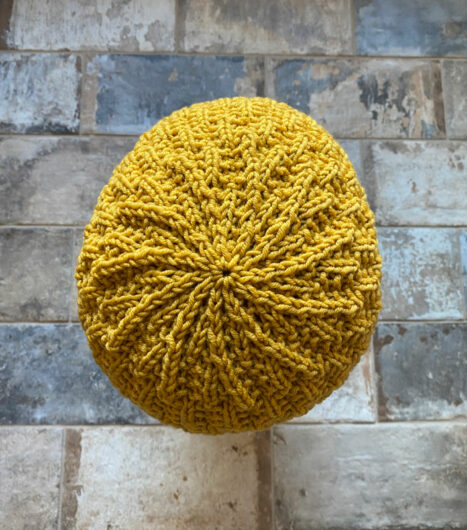 Jey is an easy-to-knit easy-to-wear beanie. 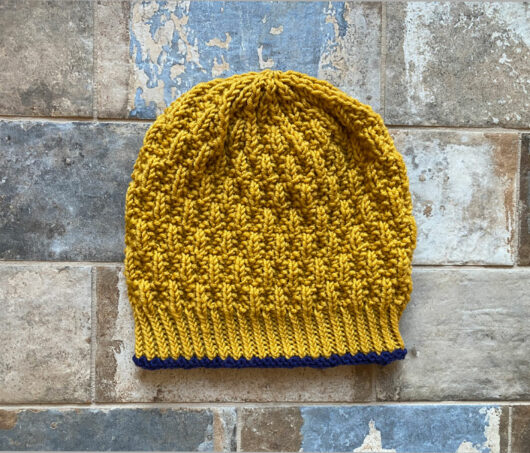 This next one is Natka. I decided to knit Natka in the Malabrigo Rios that many of Socha’s patterns suggest. Carrot Glaze is one of my favorite Rios colorways. It’s tonal but not overly busy. There’s a lot going on in Natka and I wanted to make sure my yarn didn’t obscure the patterning. 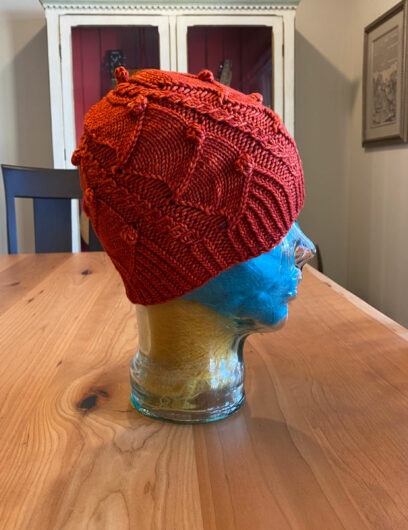 Those vertical columns are mock cable. Nice beefy bobbles are strategically placed at transition points in the fan motif. That’s an I-cord topper. The body of the hat grows organically out of the unusual twisted-rib spacing. Seriously cool. 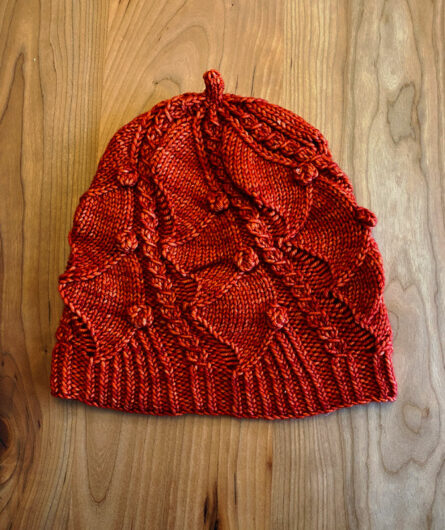 The word “Natka” is also of Polish origin and is generally a girl’s name. It means “born on Christmas Day.” But apparently it’s not reserved only for Christmas baby births.

Natka’s crown decreases are…well, I don’t want to act like a goofy fan girl…so you can just check it out and form your own opinion. My opinion is kind of close to a gulp. 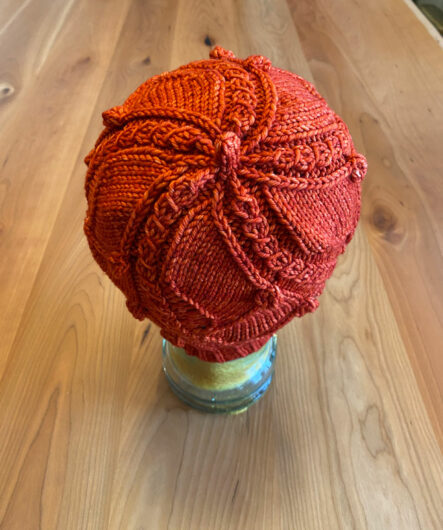 One more. Drumroll please. Edzia. Edzia is also a girl’s name, often considered to be a female version of Edward. This particular Edzia is one fine hat. The styling feels architectural in an Art Deco way. 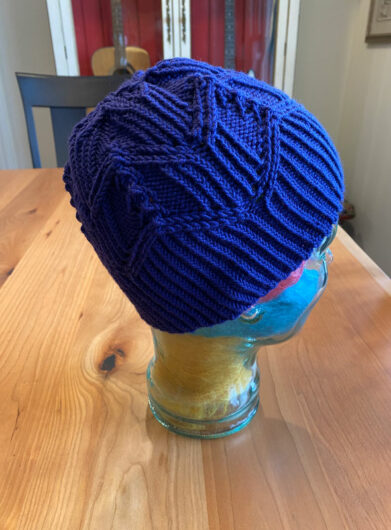 For Edzia, I returned to Plymouth Yarn Worsted Merino Superwash. 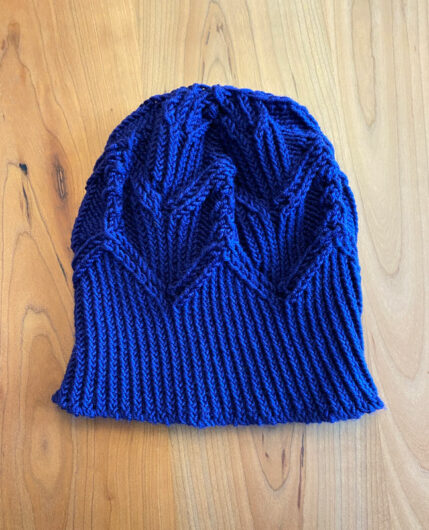 Socha is a new-to-me designer. But she wasn’t hatched just yesterday. I didn’t find her for a bit. She’s a real pro! Her patterns include clear charts that are rendered large enough even for old eyes to read. Line-by-line directions are provided as well in case you want to knit these hats the hard way instead of the easy way. Just kidding. I only became comfortable with charts in the last decade or so. Even I got there, given enough time.

These patterns are so excellent they’ll convince even even those who “don’t like to wear hats” that hats were a pretty good invention.