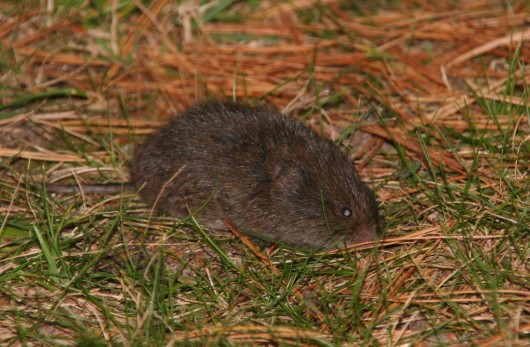 Meet the lowly meadow vole. Microtus Pennsylvanicus. (And I have no idea what Pennsylvania has to do with it.) The meadow vole can birth up to fifteen litters a year. Litters average about seven pups. Female offspring are ready to birth their own litters in three weeks. (That “three” is not a typo.) A mother meadow vole has a postpartum estrus cycle that allows her to mate right after giving birth. With all the voles running around, I assume finding an interested male vole is probably not a problem. In captivity, voles can live for up to two years. In the wild, Wiki reports on studies estimating that 88% die within 30 days of being born.

With apologies to the tender-hearted, fortunately meadow voles are just about everybody’s favorite munchie. Snakes, birds of prey, dogs, coyotes, basically everything that lives (except squeamish us) eats voles whenever the opportunity arises. Otherwise, we’d be up to our eyeballs in meadow voles.

We have no idea why the meadow vole Steve photographed above was running in circles under our winter-ready row boat for about two hours on a cool sunny mid-October day. Maybe his behavior also shows why the most prolific mammal on the planet isn’t quite ready for prime time.