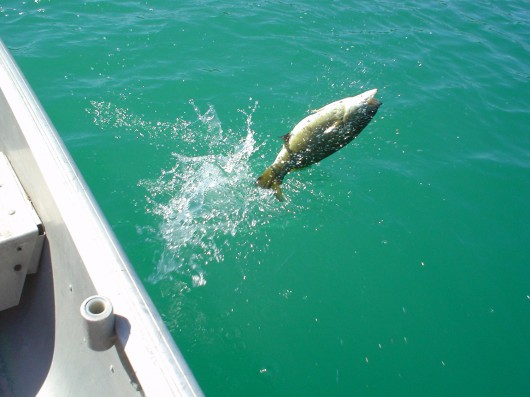 As a child and teenager, I’d fished with my dad for about two weeks each summer while we rented a cottage near Zink’s Point on Elk Lake.  I liked that, quite a bit, and never more than when others were catching fish and I was just getting bites and not hooking them.  My dad babied me and baited my hook for most of those years.  I didn’t like touching the fish, so he even took the fish off the hook for me.  I was enough of a young feminist then to know that these were things I should do for myself. But somehow my natural squeamishness prevailed and I mostly took myself off the hook and allowed him to take care of such tasks.  Eventually, I baited my own hook–with nightcrawlers or minnows.  Never with disgusting things like maggots or inchworms or whatever those awful things were that looked like tiny eyeballs he kept in some kind of oily solution in a small plastic jar. But taking fish off hooks: I just couldn’t make myself do it.  Eventually, if the fish was a small one and I’d hooked it nicely through the lip, I could manage.  Otherwise, it was dad.

So, 20 years hiatus (because we fished a bit, into my early 30’s).  In the meantime came the invention of all sort of plastic creepy crawler bait.  A great improvement over finding that I’d hooked my nightcrawler all weird so that its insides were sort of oozing out.  But, there is still the getting the fish off the hook part.

Imagine my amazement when the first fish of the new era turned out to be this nice-sized small mouth bass  The plan was catch and release.  Ah yes, release.  Honestly, I just wanted to cut the line.  We use the hooks that dissolve, eventually, and I’d unfortunately not set the hook right.  It had swallowed the hook (and my rubber worm) half way to his tail.  All of a sudden I was ten again.  “Steve, would you get him off?”   Steve had only fished a few times in his life and he never caught a fish before.  He tried, though.  And eventually succeeded.  We apologized to Bluto profusely.  He  swam off, hopefully no worse for wear.  I’m ready for the next one, with my fish gloves with rubbery palms.  I wonder if that will give me what it takes to overcome my childish squeamishness.

I remember my grandmother’s song.  “Lazy Bones, sleepin’ in the sun.  How do you expect to get your day’s work done, just sleepin’ in the sun?  I bet when you go fishin’ you keep on a-wishin’ the fish don’t bite at your line…”  Maybe Bones wasn’t lazy, just squeamish like me.