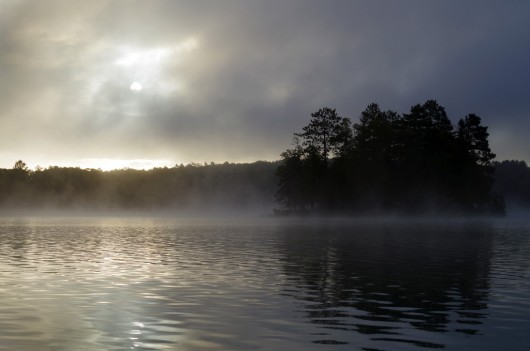 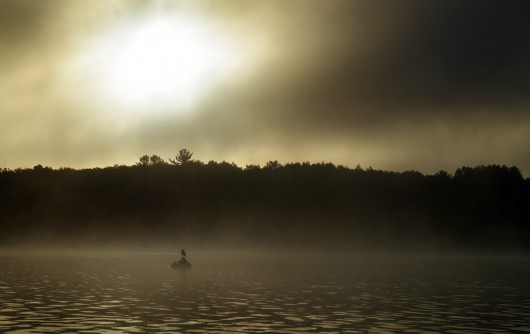 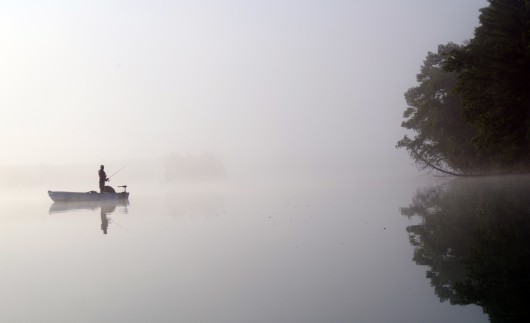 We set out across Long Lake in very thick fog about 7:30 in the morning. Steve’s kayak has a compass on it and we crossed the lake in fog so thick you couldn’t tell the water from the sky. Kind of creepy. I figured not even the fishermen would be out this morning, but I was wrong. As we left Ghost Bay, the fog had started to burn off and Steve captured fishing at its most peaceful. 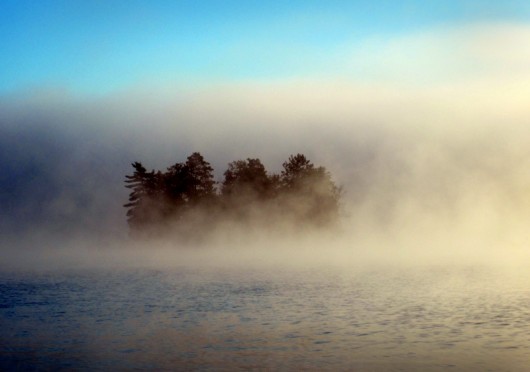 I know.  We should probably stay off the water when the fog is thick.  But it was very early, on a cold September morning, and no one else was out on the water.  Our kayaks are neon orange and bright yellow.  Steve was wearing his blaze orange cap.  I was wearing my most amazed expressions and muttering inanities like “it’s so beautiful, I can’t believe it’s so beautiful.”  I think we were safe.  Safe enough.  If you constantly fret about safe you’re going to miss a lot of incredible. 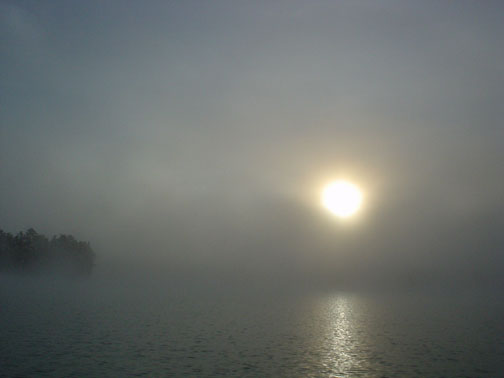 No, the island isn’t widely known by the name Belly Button.  Only Steve and I know that’s its name (and Steve knew it first of all). This is Long Lake.  Latitude:  N45 degrees, 76.85′, longitude W83 degrees, 58.41′. If you are one of those rare humans who can actually still see the figures that the constellations are named after, you may be able to see that Long Lake is shaped like a fat man standing on one leg and the island in the bigger part of the lake is basically where the man’s belly button would  be.  On this particular paddle to Ghost Bay, just after sunrise, the fog was very thick when we set out.  Steve was following compass directions and I was following Steve.  Actually, my kayak and Steve’s were almost touching because I am very cautious and not brave (and I also don’t know how to use a compass correctly, despite trying to learn).  At first I protested that we should wait until the fog cleared.  That might have been a safer choice, but gosh what we would have missed. To see the lake in this light and under these conditions, from the vantage point of being on the water, was a rare pleasure.