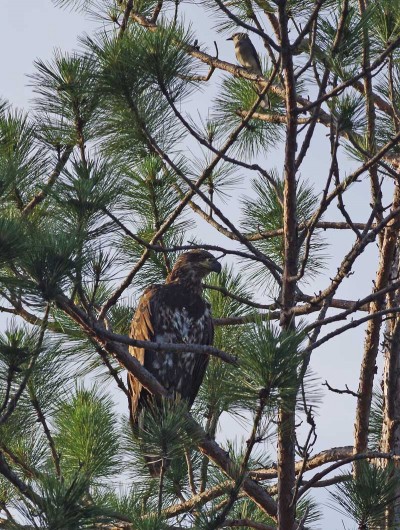 At first we thought this big guy was an osprey. We watched him fly up from a tall pine in Ghost Bay, swoop fairly low over the water, and then fly up again and land near the very top of an even taller pine. But, he was no osprey. The blue jay knew before we knew. This is an immature Bald Eagle.

We are in good company in not recognizing him at first. On a trip up the Mississippi in 1814, the naturalist John James Audubon mistakenly thought that a juvenile Bald Eagle was a new species. He named it the Washington Sea Eagle. But it was really just a juvenile Bald Eagle. The typical adult plumage develops as early as 4 years and sometimes as late as 8 years.

So, this is a juvenile Haliaeecetus Leucocephalus (sea eagle, white-headed). He was sitting on the branch seeming to be minding his own business, but the blue jay thought he was up to no good (apparently). Maybe the jay was guarding a nest. He squawked, loud, in that lovely blue jay voice. And when the eagle paid him no attention and just sat,watchful, the jay started flying up at him. He sort of dive-bombed the eagle. A few times, we saw the jay actually hit the back of the eagle.

You would think that a bird of the eagle’s size would give that jay a swipe of a talon  and that would be the end of that. But instead,he let it go on for about ten minutes. 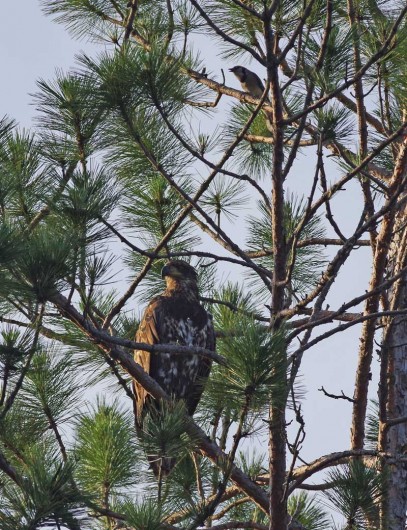 Finally, the eagle had enough of it and flew off. 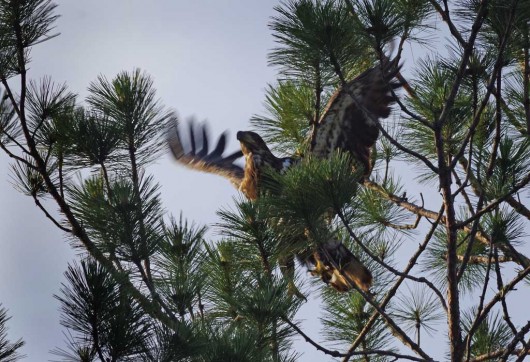