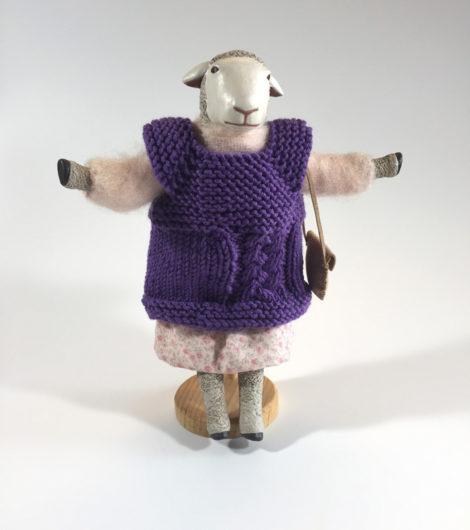 Well, well. Doesn’t Lambie look stylish?  She’s partial to pink and purple and told Glasshead that this is her favorite ensemble. 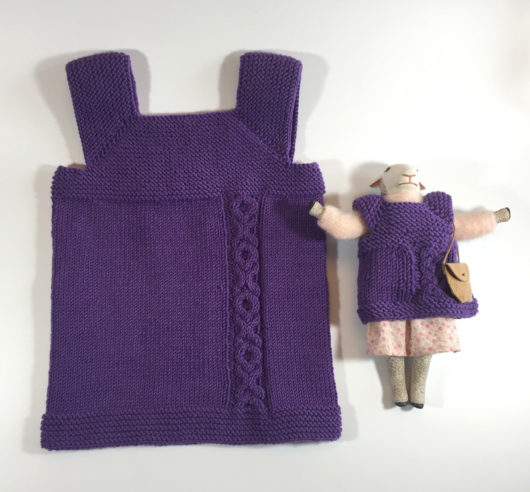 Lambie is wearing Dolly Milo, the doll-sized version of Georgie Nicolson’s popular child-sized DK-weight vest. Her pint-sized version sports a simple cable. I knit the 9 inch version of the pattern, which includes modifications for a 5, 7, and 11 inch doll as well. 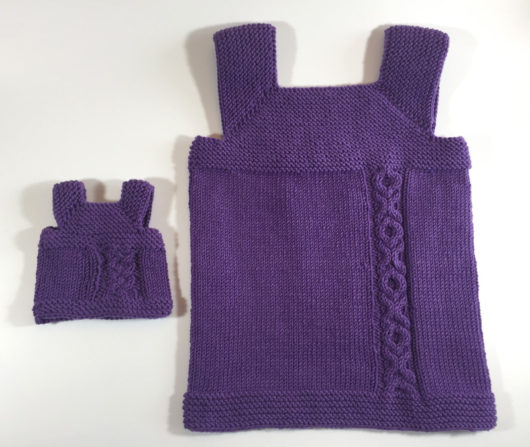 For Evelyn’s Milo I knit the 4-yr old size and selected the hugs ‘n kisses cable strip. Nicolson’s pattern is sized from newborn to 6 years. It includes directions for six different cable strips. So, knitters’ choice.

Milo is a very clever construction. It’s knit top down, in one piece. No seams, despite the boxy “yoke.” My set is knit in Debbie Bliss Rialto DK, a superwash.

Now, keep this next bit quiet. Lambie is not much of a reader, and neither is 3-yr old Evelyn, so I think the news is safe here. Evelyn is getting a second Milo as part of her New Year gift package. There wasn’t enough yarn left to knit one for Lambie, so I’ve not blabbed much about it. But for Evelyn? Well, ta da! 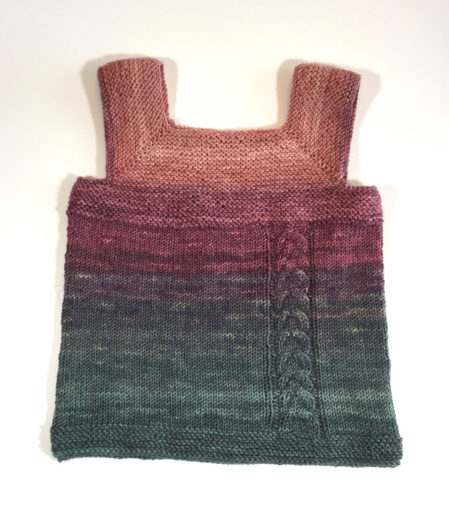 Totally cute, methinks. The cable is the horseshoe pattern. The yarn is Done Roving Yarns Frolicking Feet DK gradient. It’s another superwash. I purchased it for socks. But then I realized that not everyone likes their socks unmatched, which is what this gradient would have translated to as socks. Plus 350 yards of DK isn’t always enough for socks. What to do? Milo turned out to be a perfect choice. There was a bit of yarn chicken to the ending though. I shortened the vest some, which will still be fine for Evelyn, and I had about a yard of yarn to spare. The gradient really shines in this pattern.

Ok. Lambie is baaaaa-ing over on the bookcase, demanding she get back into the spotlight. 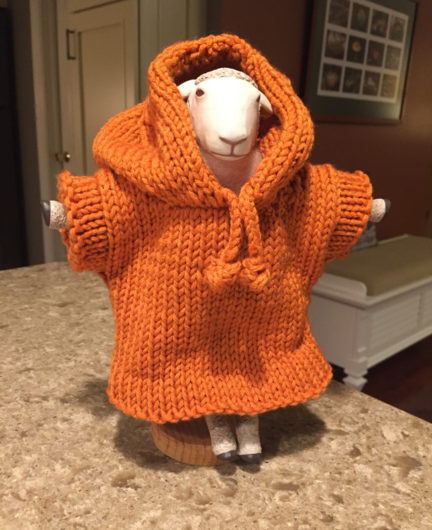 She’s modeling Keweenaw, a freebie from the Berroco Design Team. In 2013, Berroco’s Team bear, Barrison, traveled to Michigan’s upper peninsula. Barrison’s human lived in the UP for a few years and knew that the UP is jaw-droppingly beautiful. She blogged about the trip here. The Keweenaw peninsula, copper country, juts out into Lake Superior. Anyway, Barrison traveled about very cozy in his hoodie, complete with ear slots. 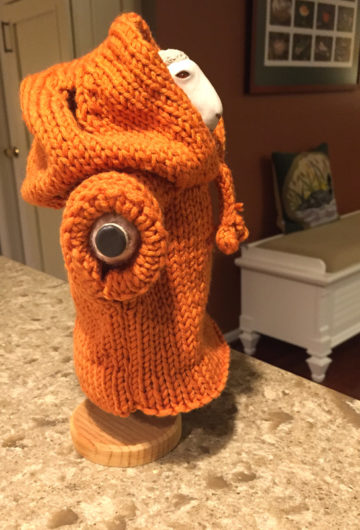 Lambie’s pottery ears have zero floppiness. So Lambie couldn’t cooperate in showing off the hoodie part of this hoodie. But Evelyn’s bears will do better. I knit my Keweenaw in what the pattern calls for, Berroco Comfort, and even managed to honor copper country by using yarn from the pumpkin colorway.

The next addition to the doll wardrobe is another Ravelry freebie Little Kina, by Muriela. 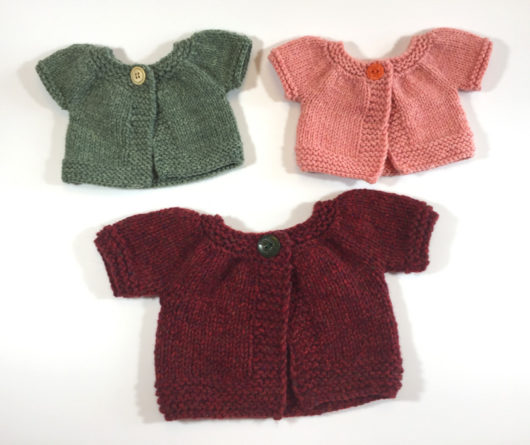 Little Kina is designed with 12 and 15 inch dolls in mind. The green and pink sweaters are knit in oddments of Stonehedge Fibers Shepherd’s Wool, a worsted. The wine-colored sweater is knitted in a much beefier worsted (more Aran, actually) Harrisville Design’s WATERshed.

These Little Kinas are really getting a work-out. When last I saw the pink one, Evelyn’s Strelka the Valiant was wearing it. Here’s the secret test to figure out if a recipient is knitworthy. Have their hand knits been used so frequently that they’ve developed pills? Yes? “Callooh, Callay.” I chortle in my joy. My granddaughter is among the knitworthy!