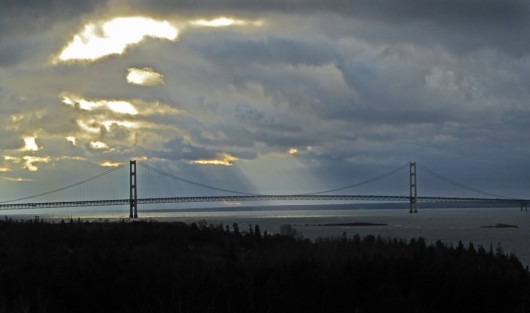 No, not that “Big Mac.”  This one is the real deal. The Big Mac that links Michigan’s upper peninsula to its lower one. The bridge that was opened to traffic on November 1st, 1957. When I was 5 years old and Michigan’s governor was G. Mennen (“Soapy”) Williams.  Big Mac a/k/a Mighty Mac cost Michigan just under $100 million dollars to build, financed by the sale of bonds. We just recently retired the debt.

The bridge contains nearly five million steel rivets, over one million steel bolts, and 41 miles of cable wire. It was built in only 4 seasons of work. The central section of the bridge is special. The span is partly constructed of open steel grates. Yes, through the roadway, you can see the water about 550 feet below. If you come to Michigan on Labor Day, you can join the annual walk over the bridge and check out the grates close up. Even just driving over them can be a bit rattling. Especially on a windy day. The open grate section allows Big Mac to withstand the sometimes intense winds of the straits. On November 10, 1975, the day the freighter Edmund Fitzgerald sunk with all hands on Lake Superior, the winds in the Straits were clocked at 90 miles per hour.

Big Mac is the third longest suspension bridge in the world, spanning the Straits of Mackinac. Or the fourth longest, there seems to be some debate about that. The Straits are 4 miles wide, which is the most narrow point between our two peninsulas. Adding in the approaches, the bridge is five miles long. Mackinaw City anchors the south end of the bridge. St. Ignace anchors the north end. Lake Michigan is to the west. Lake Huron to the East. Have a look. It’s far more impressive in person.

Big Mac made one state out of what was really two. You used to have to take car ferries to meet your other part.  Sometimes the lines for the ferries to the “U.P.” would stretch 16 miles all the way to Cheboygan. It was quaint, but didn’t work well. Big Mac even made it into our state pledge of allegiance, written into law in 1972:

“I pledge allegiance to the flag of Michigan, and to the state for which it stands, two beautiful peninsulas united by a bridge of steel, where equal opportunity and justice to all is our ideal.”

United by a bridge of steel. Come visit us sometime. This country’s “Third Coast” is so worth the trip.