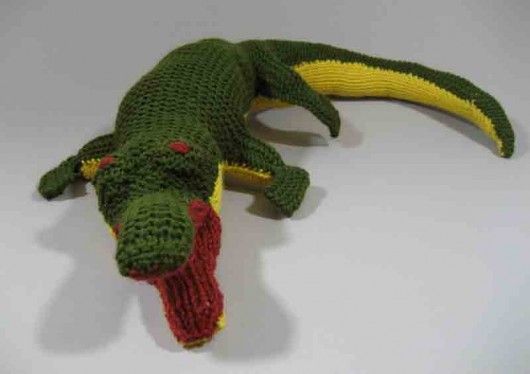 I first knit this pattern in 1968, for a yet-to-be-born baby whose son is now a Marine. I was about fourteen years old. I’ve probably knit it at least another ten times. For my son, who is twenty-five now, I turned him into a dragon. I picked up stitches along his spine and increased symmetrically until I had a nice full fin, which I tacked down at either end.  My son printed his name on the pattern, in ink, in a shaky pre-school scrawl. When I see his signature and this pattern, I smile for remembering.

This alligator has been gifted at birthdays and at holidays. He’s been auctioned off to support schools and The United Way. He’s easy. So cute. A most satisfying quick project, in three pieces, knit flat in worsted weight yarn.

I don’t know anywhere you can find the pattern except if you can get hold of a copy of McCall’s Summer Make It Ideas, Summer 1968. Check out the cover of the mag, in case you happen upon it at a garage sale. Not much else in the magazine is tempting, but this gator is a keeper.

The designer is not identified. But thanks so much, whoever you are (or were). I bet you also designed the frog in the same issue. The frog is cute too, but not in the same league as your alligator.

Back in the days of the old “Knitlist” I was determined to share this pattern with my list mates. I located whoever McCall’s successor company of the moment was and wrote to ask permission. Permission was denied. The reason given was that some day the company might want to release a book that included the pattern. Well, Publishing House, we’re still waiting for that book! 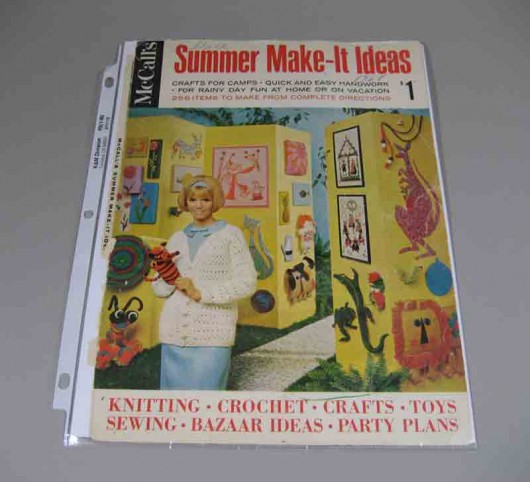 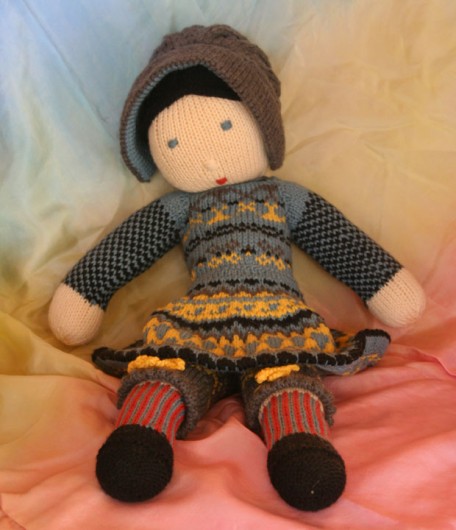 I believe this is an old, old McCall’s pattern.  In the original, she was rather Amish looking, decked out in shades of brown and black (though an Amish doll would not have had facial features).  I decided I wanted to spiff her up a bit.  She has hearts knitted into her bloomers.  Except for the hat, the clothing is my design.  Under her hat, she still wears the pattern’s originally-designed knitted hairdo: long hair parted in the middle, done up with a bun in back.  I added an “I-cord” detail all around the wig, to give it a bit more definition at the edges.  A fun project.  She was the second in a series, with the first one given away to a school fund raiser auction.