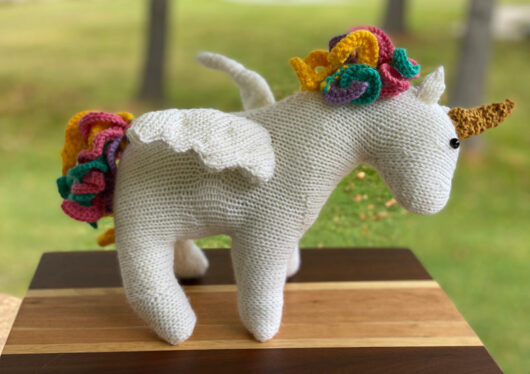 You know I couldn’t resist this one: “Grandma, I don’t have even one unicorn lovie. Can you knit a unicorn for me?”  The child is knitworthy with a capital “T.”  When she opens a package containing a newly knit lovie, she smiles broadly and immediately expresses her gratitude without prompting from her parents. Then she sets to playing with her new lovie. Her mom sends me photos of my granddaughter’s bed with a tumble of lovies and there’s my granddaughter sleeping among them.

So, this is Helena Keighley’s, soon-to-be-Evelyn’s, sensibly named Unicorn or Winged Horse. It’s knit all in Novita’s 7 Veljesta Solids. I discovered this yarn fairly recently. It’s a reasonably priced 75% wool 25% nylon yarn that works up as a worsted weight for me. I really appreciate that it comes in a wide choice of colors, including many kid-friendly saturated ones. I’ve not even encountered any knots. This is a wonderful easy-care yarn and is both machine washable and machine dryable.

This critter’s entire body (except for the wings and ears) is knit flat in one piece. That really cuts down on the sewing-up time. The mane and tail sections are added individually which is a bit of a pain. And since I super-sized Uni by using worsted rather than DK weight, and worked on size 4 needles rather than 2.5s, I added 2 sections to each size of the mane and tail dangles.

I stuffed Uni with polyester stuffing, being sure that its hind quarters and legs were firmly stuff. Uni stands without any internal aids. 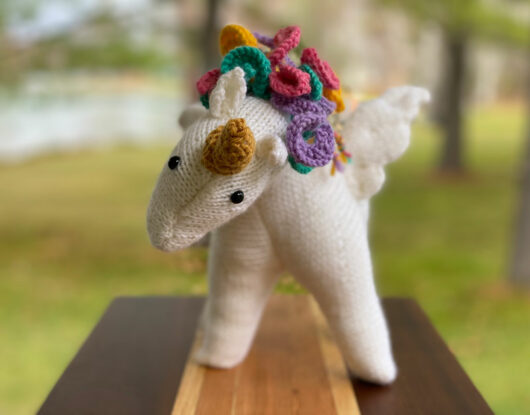 I asked my granddaughter if unicorns had wings. She emphatically told me yes and that her unicorn needed wings. So wings it is. Technically I believe that makes this critter a pegasus instead of a unicorn, but no matter.

Supposedly toy sales show that unicorns aren’t the trendiest sought-after-stuffie anymore. Unicorns have been unseated in recent years by llamas. Llamas. Really? Upon hearing that, Uni spat at me and turned away in a huff. 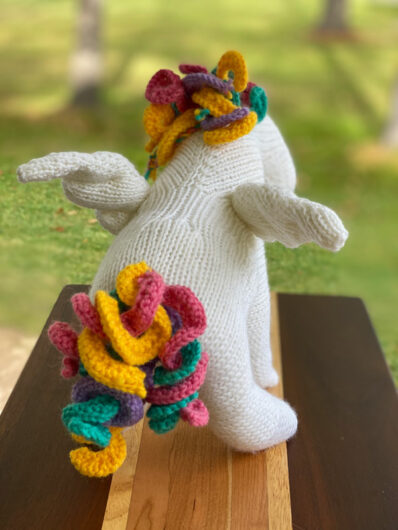 This you-don’t-know-anything retort shows the wonderful shaping that helps give Uni an endearing sense of gesture.

And now for something completely different. Susan B. Anderson’s Mother Hen. I like to knit my critters all in the same yarn. It helps assure that parts and clothes fit together proportionally so I bought Anderson’s kit with Barrett Wool Home Worsted Weight. The kit had enough yarn, but just barely. I had only 3 yards of gray left. I’d have preferred if I didn’t have to play yarn chicken with this hen kit. But mother hen is super cute. If you haven’t figured it out yet, that’s a chick and an egg in her sweater pocket. 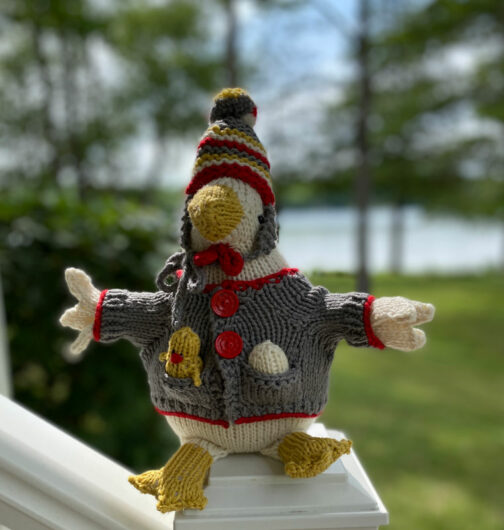 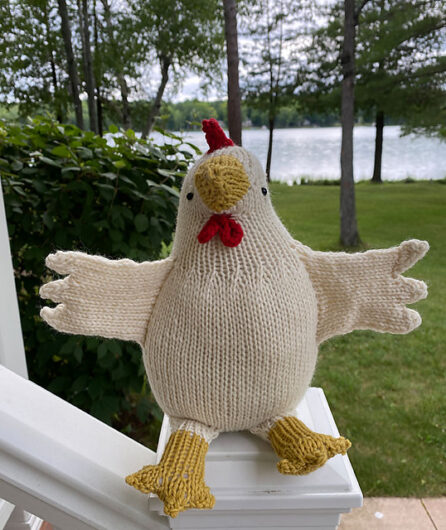 And here’s her accessories. 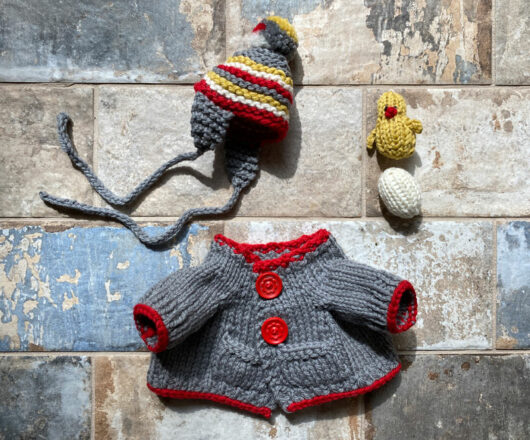 Don’t tell Evelyn–she reads but not my blog–Mother Hen will be joining Uni in the package to be sent out soon. I told this irascible hen that there will be hell to pay if she pecks at Uni on the way. I’ll know.