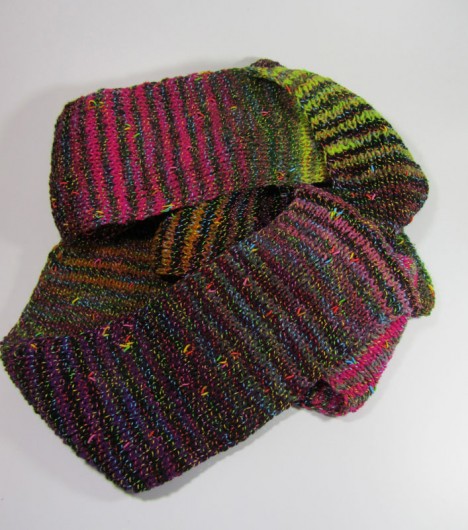 This is a Jared Flood two-yarn scarf. He says he didn’t invent it, but he certainly popularized it. Choose two colorways of Noro. The striping effect is created by alternating the yarns every two rows. Flood recommends Noro Silk Garden, but this is Noro Kujaku. Kujaku is 85% wool, 15% acrylic. It feels a tad scratchy while you work with it. But soaking it in water with a bit of hair conditioner added in softened it up.

You may wonder why this scarf is of Dr. Who proportions. I did not plan to use it as a scarf. I planned to use it as a personal yarn bombing project for my new basement  workshop. That room has an air conditioning line running through a section of it with a chunky pipe covered over with black foam. In the workshop, it’s been spray-painted to match the wall and ceiling and it now blends in rather well. But as it winds through the servery area and into the workshop, it’s still the old black foam. My plan was to knit something very colorful and cover the piping. I think it would have looked nice and been quite the conversation piece (if anyone but us ever saw it).

It turned out to be one of those “best laid plans” gone awry. I didn’t realize, until I knitted up all six skeins of Kujaku, that the pipe is sometimes flush to the wall, sometimes not. Every few feet it is interrupted by a metal band that holds it in place, but I thought that would be manageable. I figured I would just wrap the pipe, length-wise, and sew my scarf into a tube. Once I looked more closely at the situation, I decided it wouldn’t work. It would just have looked kind of colorfully sloppy. Discouraged, I set it aside to ponder what to do with it.

I decided to donate my almost ten feet of knitted scarf to a United Way charity auction at work. Some of my co-workers got into a bit of a bidding war over it and it fetched a good price. Since then, I’ve been told it went to a Detroit Tigers World Series game. It didn’t bring our Tigers any luck, not one bit, but at least it kept one fan warm. 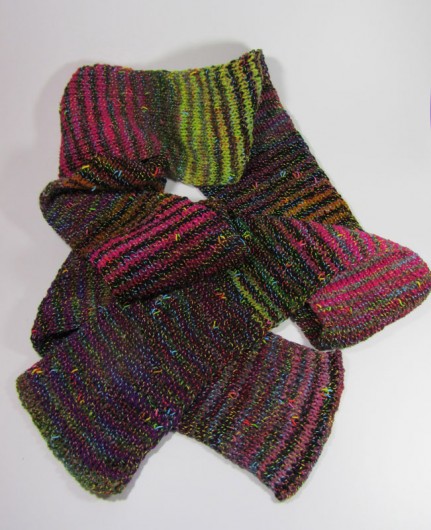