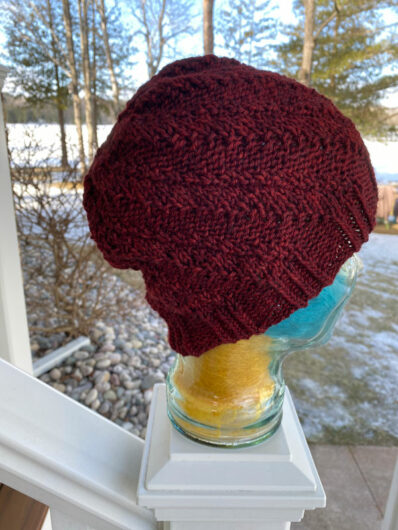 Hats are among my favorite knitting projects. There are lots of heads out there. And unlike hands and feet, each person has only one head. There is no threat of second hat syndrome. There is no reason to knit the same hat for a second time though, honestly, I often do.

Maria Socha is one of my favorite hat designers. This one is her Wiatrak design. She says it’s a “simple hat with a swirly crown.” Online translation aids say that wiatrak means windmill. Check out the crown to see how apt the name is. 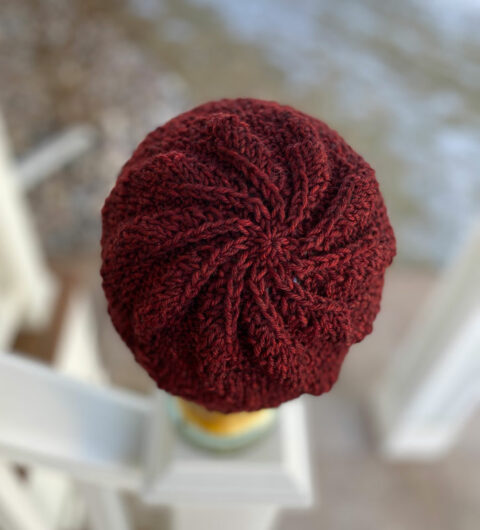 Wiatrak calls for Aran weight yarn. I knit mine in Copper Corgi Fiber Studios Jones Street Worsted in the Dubonnet colorway. The yarn is a hefty worsted weight in a luxury blend of 60% merino, 30% alpaca, 10% silk. The unusual ribbing, (knit through the back loop, purl 1) 3 times, purl 3 across the round, turned out a tad limp. I’m thinking the alpaca is the culprit. But once the hat is on a head all that disappears.

Next up is another Maria Socha design, Autumn Lady. I knit my version in 7 Veljesta Solid and, although I typically like this yarn, it didn’t seem to do justice to this fine pattern. 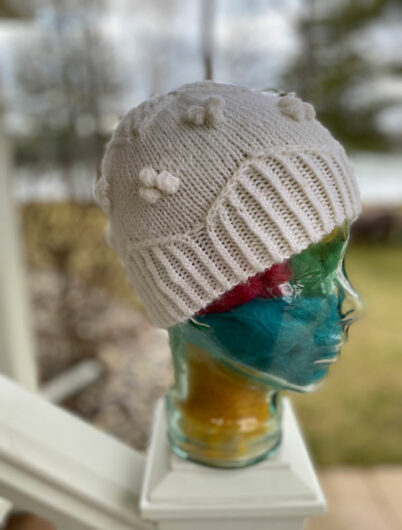 I’ve worked with this yarn before and never found it limp or even a bit thick ‘n thin. But that’s what this white shade is. The pattern puts some stress on the yarn at points where the direction of the knitting veers. And inserting a bobble into stockinette does too, at least in my knitting. The result is some small holes in the work that I’m not happy about. But I think that’s only a problem because my yarn wasn’t “full” enough. Plus the white color seems to make the holes more prominent. After machine washing and drying the yarn fluffed enough to smooth out the work a good deal.

I decided not to add a pompom because I love the crown decreases and didn’t want to cover them at all.

At some point I will knit this again in a nice plump wool worsted and I know I’ll be happier with the final product. 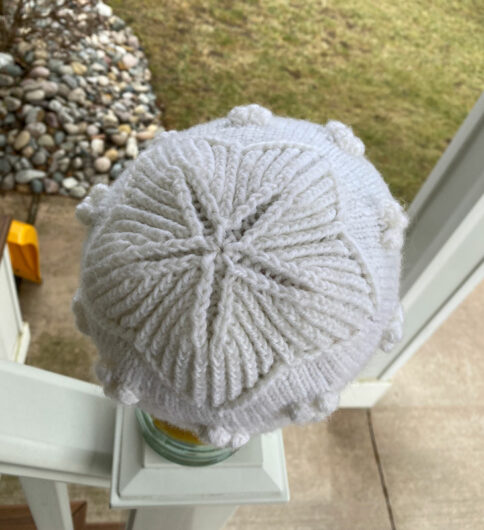 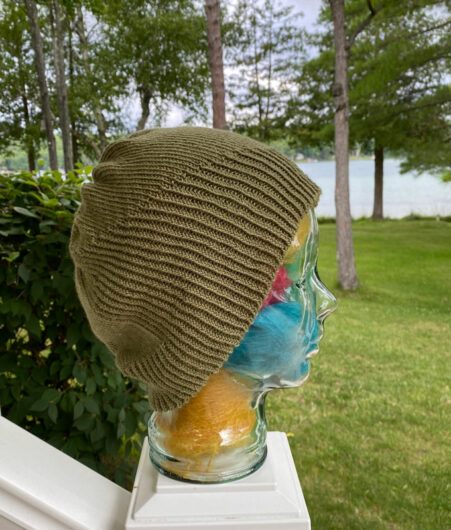 My ideal cup ‘o slouch is not quite so full. The hat was planned for my son but I know it’s too slouchy for his taste. My stitch gauge was correct though the row gauge was off a tad. I didn’t fully appreciate how stern a master row gauge would prove to be. By the end of the twisted rib stitches, I was already 8 inches from the cast on (rather than 7.5). I eliminated the extra rounds (5 for my size) before the decreases. But you simply can’t stop the length from being what it will be without sacrificing the twisted rib sections that are the main design detail.

I needed to wet-block this hat to even out the stockinette stitches and tame the bit of ruffle that formed just after the ribbing as the hat moves into its stockinette section.

The crown decreases worked out well. 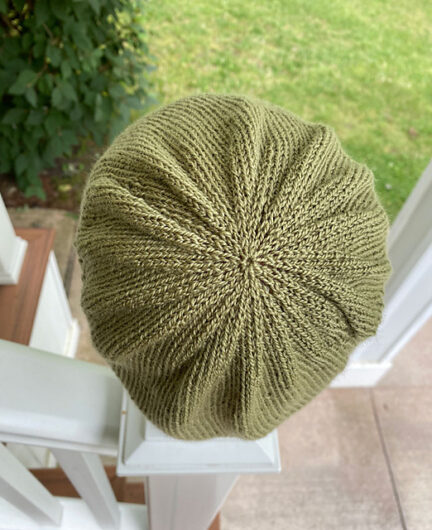 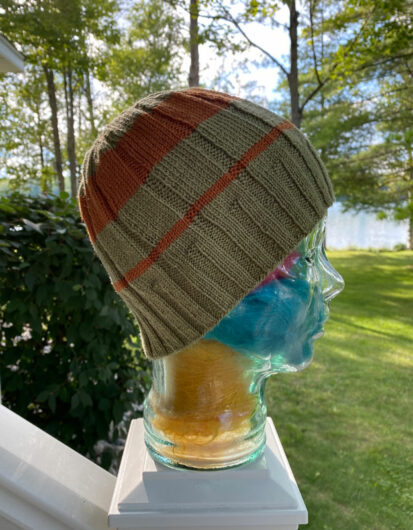 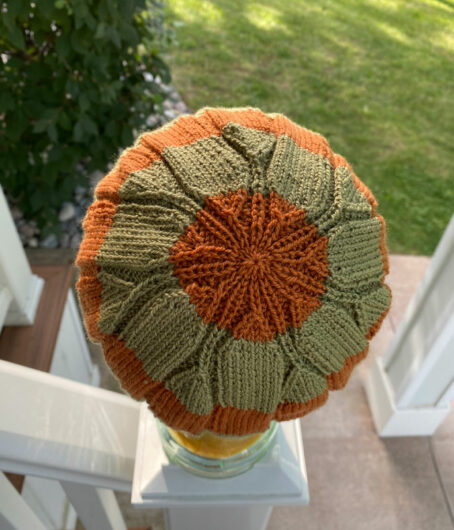 Now, back to Maria Socha for her Rioska hat. I knit mine in a beautiful (cross that out) autumnal (cross that out) camouflage shade (maybe) of Sugar Bush Bold. Before Bold was discontinued this colorway was Melon Melody. My excuse? I love Sugar Bush Bold. It’s 100% merino superwash worsted. I can’t buy it anymore. And I found this colorway online and on sale. I clearly needed a pattern with enough going on that it stood a chance of taming this unruly colorway. Rioska is a great pattern, including for its taming ability.

I already found a head attached to a very classy lady who chose this hat, from many available ones in my gift stash, because she sincerely liked it. 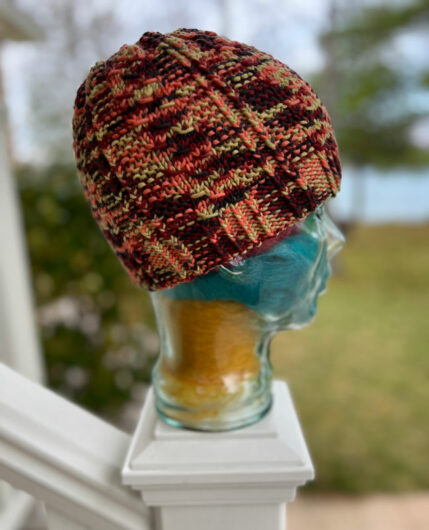 All Socha’s crown decreases are planned well and look great. 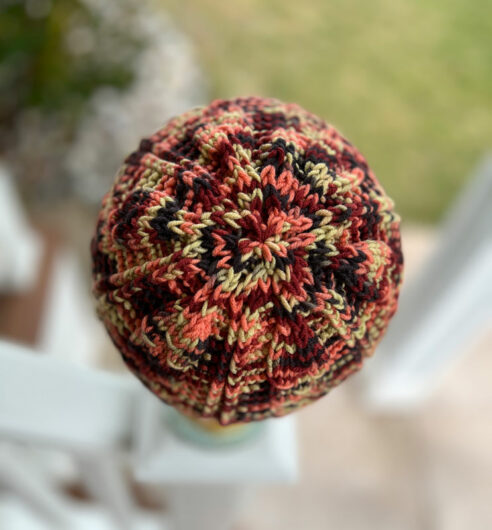 I don’t want to slander Rioska with my crazy camo colorway. Here’s how it looks in a calmer skein of Sugar Bush Bold, Rose Garden. The mock cable is worked with a yarn over. It’s a fun stitch to knit. Think of Rioska if you’ve got an unruly colorway. 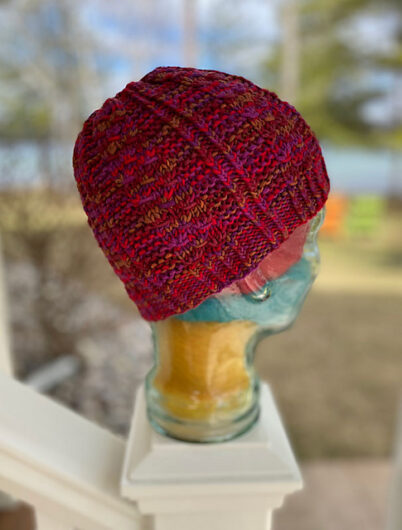 And it’s drop dead gorgeous in Malabrigo Rios, as the pattern and project photos on Ravelry show clearly. 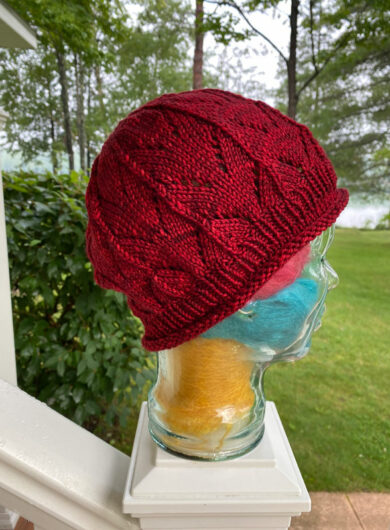 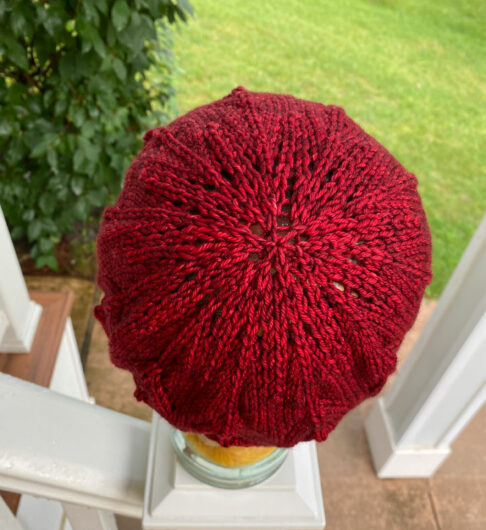 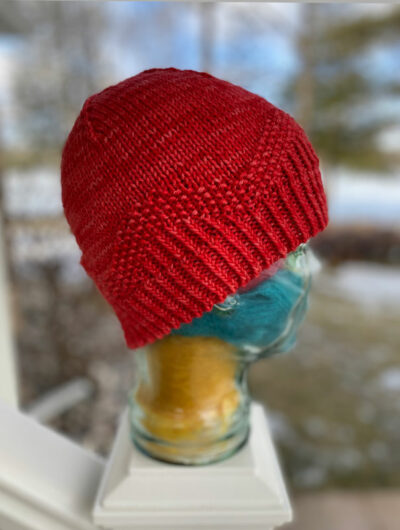 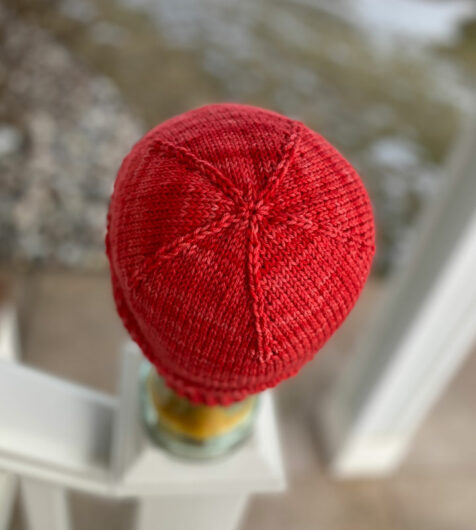 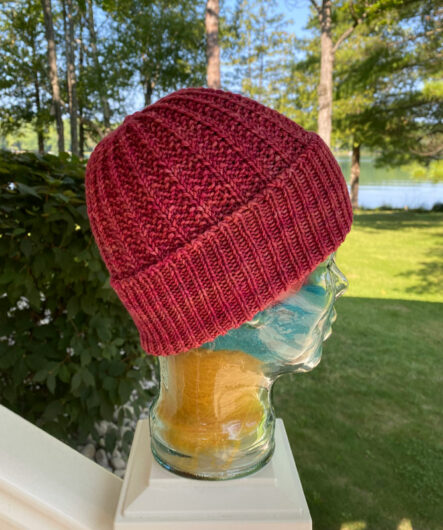 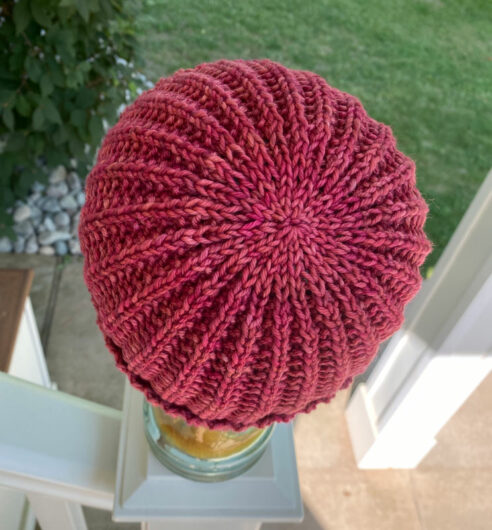 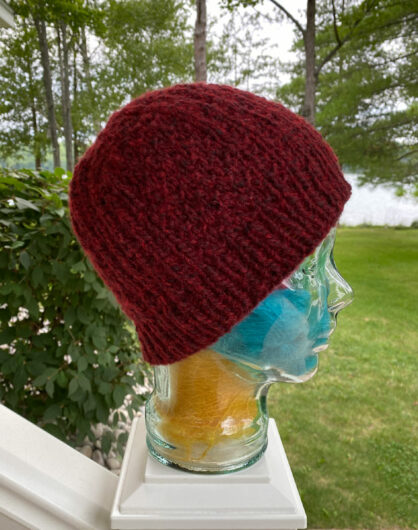 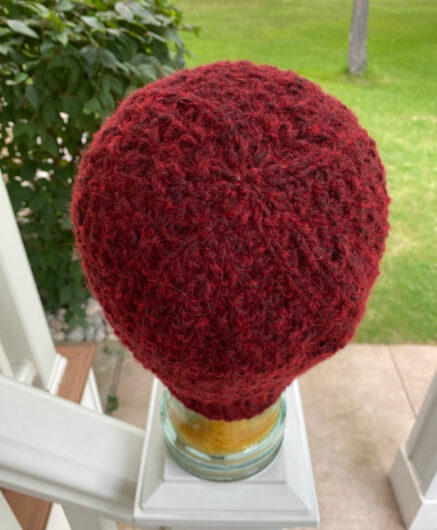 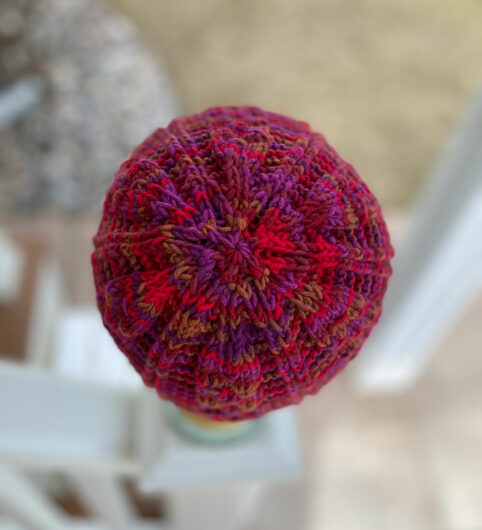