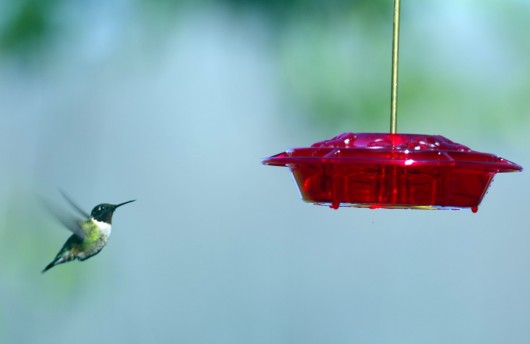 This is MIchigan’s only hummingbird. Well, not the only one literally, of course. This is a female Ruby-Throated Hummingbird. Pretty, teeny, and every centimeter feisty. Yesterday a female was sitting on a perch daintily sipping our nectar. A male arrived and she tolerated him. With Michigan so slow to warm this year, and the late bloom of our flowers, they’ve been after anything red. One dive-bombed our red and white cooler while the hatch of the car was open. Another ventured into the garage to check out another red piece of plastic.

Here’s one of the males. They aren’t seen as often at our feeders. 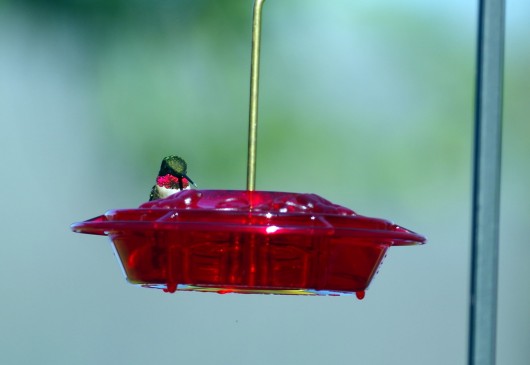 While I was still marveling that the pair wasn’t doing any aerial dueling, a second female arrived on the scene.The female-first-on-the-scene did the hummingbird equivalent of a battle between rival gang members. She sprung up from the feeder perch and began to go at the other female in long, low, u-shaped swoops. During one of the swoops she must have actually struck her rival because the second female sat on the deck rail–unheard of–for a few minutes as if shaking off the effects. She flew off and the female-in-charge returned to her evening meal.

Baltimore Orioles are preferring the hummingbird feeder to the navel orange we’ve halved and hung on a feeder pole. They’ve picked at the orange but are apparently preferring the sweet liquid this weekend. 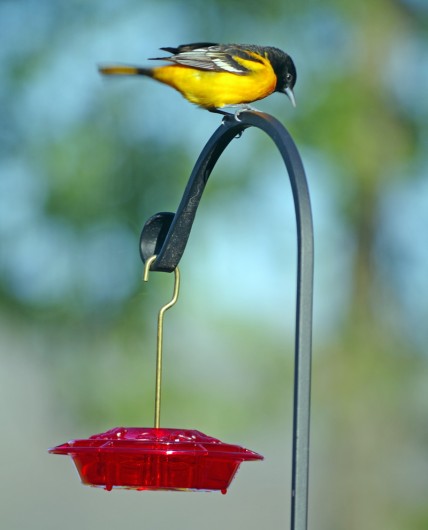 They settle on the perch, spilling some nectar from the feeder when it’s filled. 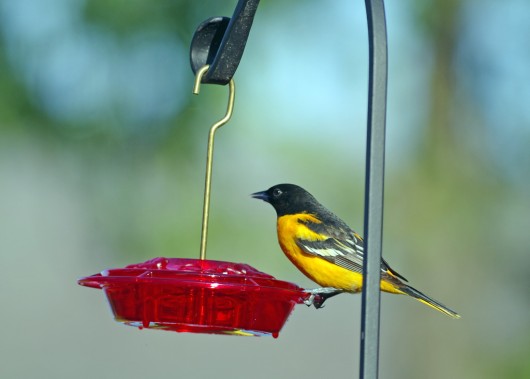 Then they sort of do the bird equivalent of a forward bend and drink. But in between sips, it’s like their head is on a swivel. I think they are on the watch for the female hummers, who seem to have no sense of their size relative to other birds. 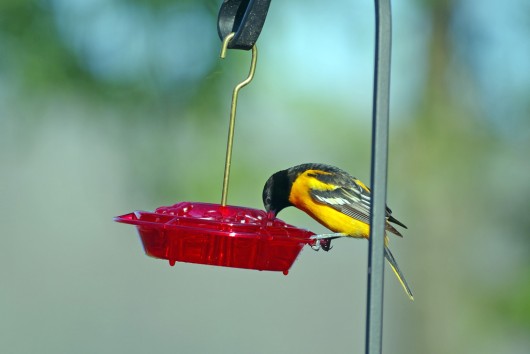 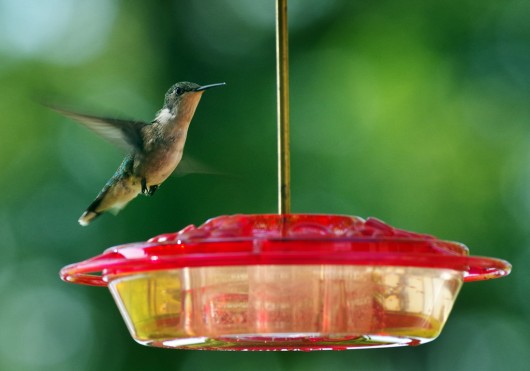 The hummers have been having their sky-battles this week. They are fierce competitors for food. One sits on the feeder, scanning the skies for intruders. Geez. Why not just eat? She nervously sticks her bill in the feeder hole and we see the food rippling and know she’s getting nourished. Here comes another and instead of sharing, they compete. We just realized there’s a third female that’s also trying to feed. We know that because all three of them were mixing it up a few minutes ago. They battle feet first, but also use their bills.

Female Ruby-throated Hummingbirds, those amazing tiny birds that fully grown weigh only three grams, are definitely not all sugar and spice and everything nice. But, speaking of sugar, a hummingbird will consume about half its weight in sugar every day. One odd hummer fact? All that sugar being extracted from nectar (and our feeders) creates a lot of water. Most birds have a kidney that’s efficient enough to manage water excess by turning it into uric acid (that white lumpy paste we all love to find on our windshields). Hummers handle their excess water by excreting clear urine–a lot of it. So, if you see beads of water being shed as a hummer leaves a feeder, the little guys aren’t sweating.

One amazing hummer fact? Ruby-throated Hummingbirds make an annual migration, flying 500 miles non-stop over the Gulf of Mexico in the fall. And they fly back over the Gulf in the spring.  Before the migration, they bulk up and add about 50% of their body weight. And no, they don’t migrate on the backs of geese.

One sort of creepy hummer fact? A main predator is the Praying Mantis. Yuck. And bullfrogs. Somehow, I imagined raptors, not big bugs and big frogs.