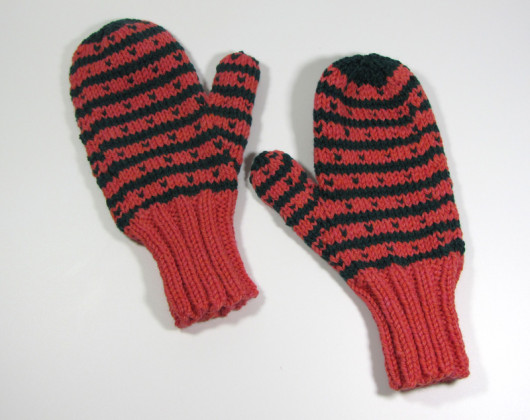 This pair of mittens is Anne Bosch’s Wisconsin Warmer Mittens. The pattern’s available on the Blackberry Ridge Woolen Mills site or on Ravelry. I knit my pair on the shrimpy side because they were made for a pair of favorite local shrimps, my 3rd grade neighbor-twin set.These mittens are knit in Stonehedge Fiber’s Shepherd’s Wool Worsted in the antique rose colorway, with blue spruce highlights.

This is a very straightforward pattern. No right mitten left mitten fussiness. And, best of all, a nice rounded mitten and thumb top. I know that hands sort of come to a point because, obviously, our middle fingers are the tallest ones we have. But I just don’t favor pointy mittens.

Here’s another pair in the same Shepherd’s Wool, this time in antique rose and garnet. 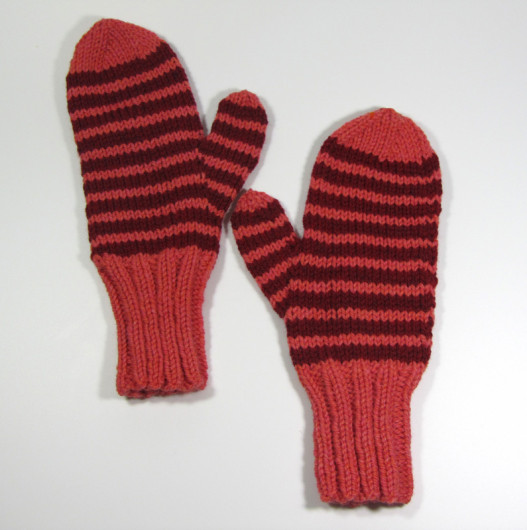 This pattern is Mittens For All, by Jodi Lewanda, a free RedHeart pattern. It’s a super easy knit, just like the Wisconsin Winter Warmers, but somehow that pointy top and thumb just don’t sit as well with me. 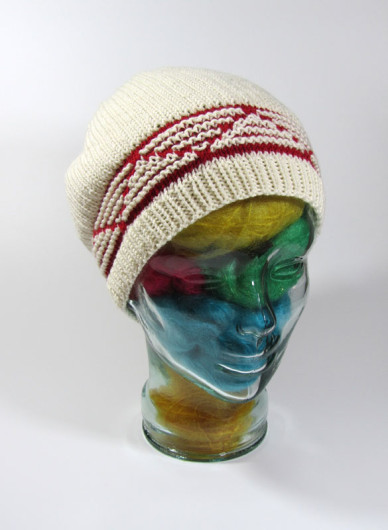 This is Breck, by Susan Vilas Lewis of Stay Toasty. She’s Lewister on Ravelry, where you’ll find her designs. The slip-stitch colorwork is meant to evoke the mountains in Breckenridge, Colorado. My red and off white version is knit in Debbie Bliss Cashmerino, a sport weight, which is what the pattern calls for. 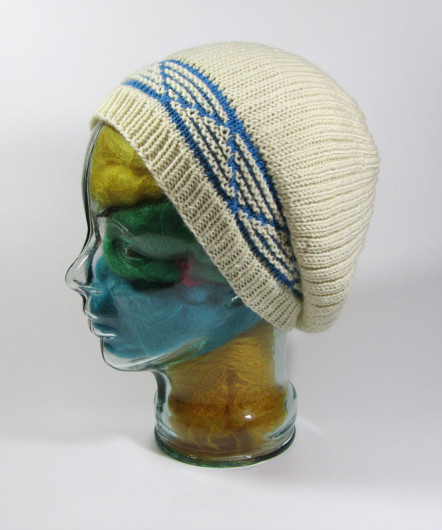 I was so pleased with the result that I decided to immediately cast on for a second version, this time knit in Plymouth Yarn DK Merino Superwash. In DK-weight, the hat ends up slightly slouchier, which is a nice effect.

Here’s another look at both. 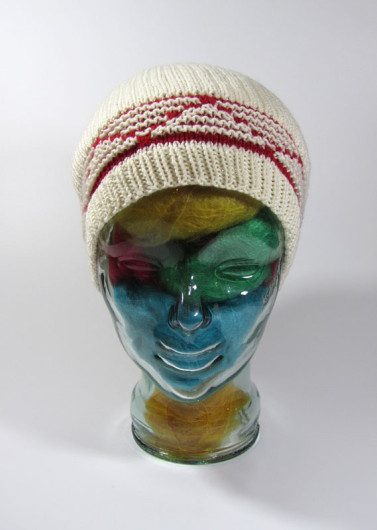 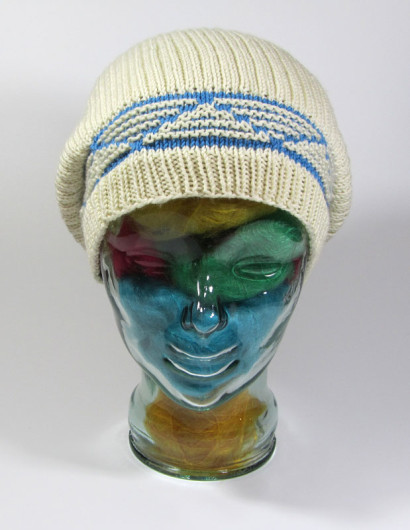 Lately it’s been warm and a bit muggy. Typical August in Michigan. That’s when I often find that my knitting perversely turns to small, cold-weather accessories. And hats are a major favorite because, well, maybe because… you only have to make one. But then my recent knitting of hats has found me knitting two, so that theory doesn’t hold up.

The Thinker is definitely a major favorite Stay Toasty design. Here it is knit in Stonehedge Fiber’s Shepherd’s Wool Worsted in the blue spruce colorway. 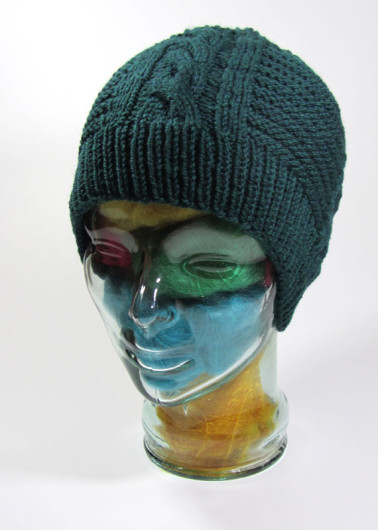 The Thinker is a well-behaved hat even at its crown decreases. 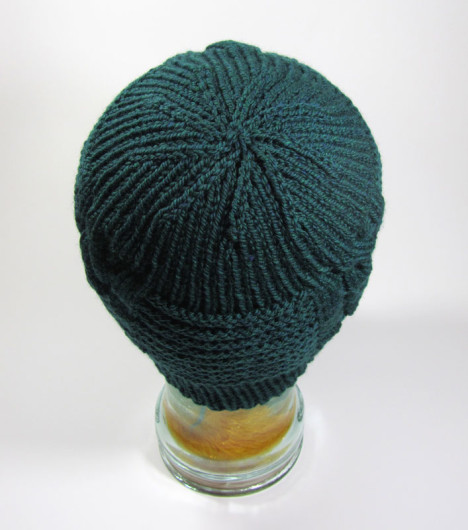 And here’s more Thinkering. Another version in the same Stonehedge Fiber Shepherd’s wool. The garter stitch horizontal bars and the two easy cables keep a knitter interested. But the pattern is totally easy. The pattern is sized from infant to large adult. 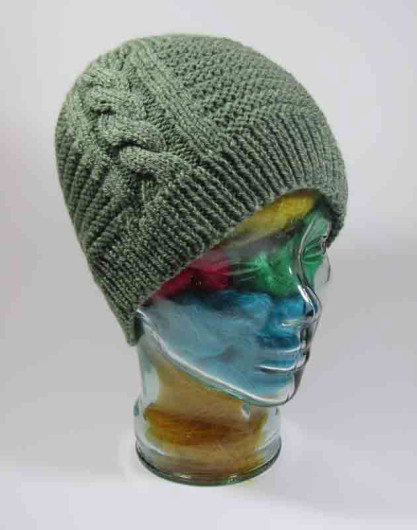 This is one good hat! My trusty glass head is pleased to model these Stay Toasty creations. Check out a few more Thinkers here. 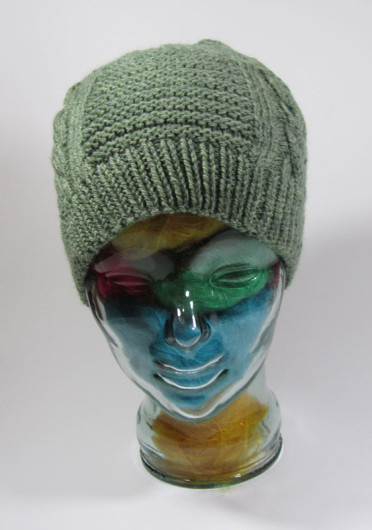 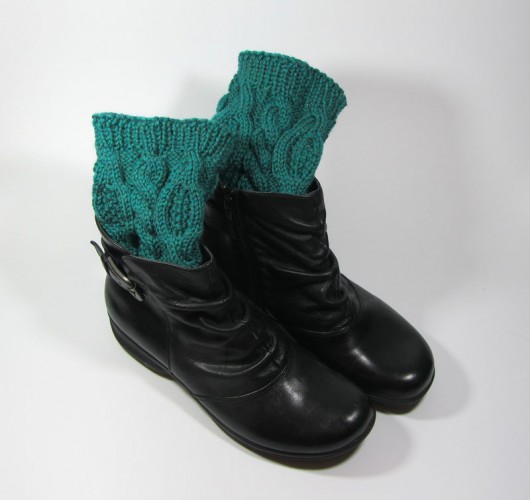 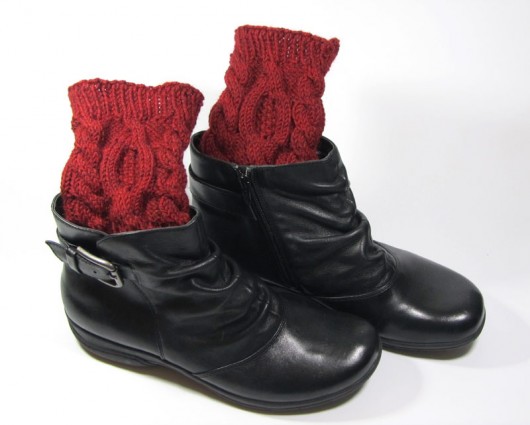 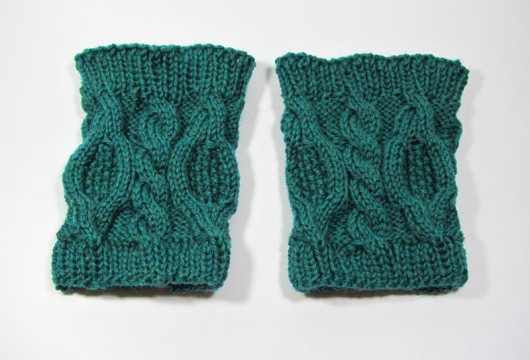 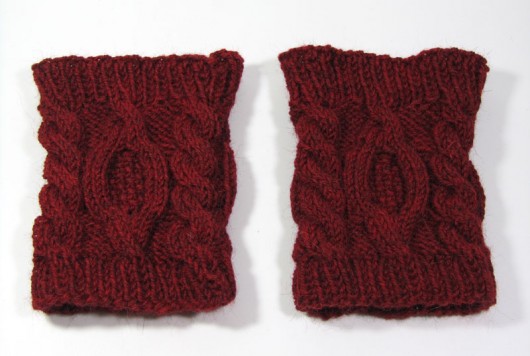 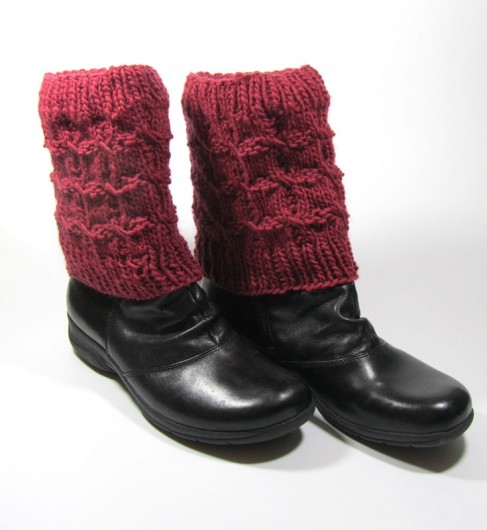 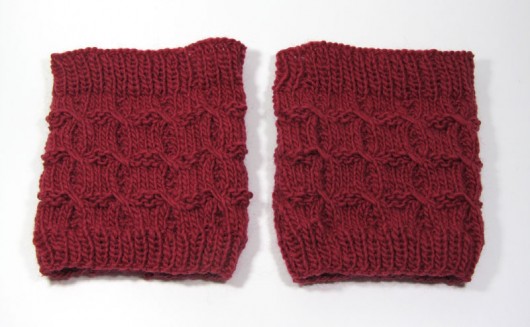 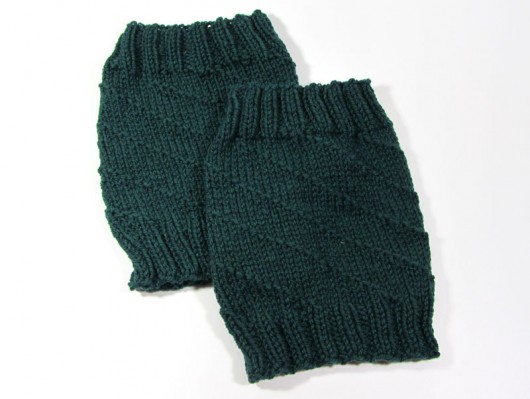 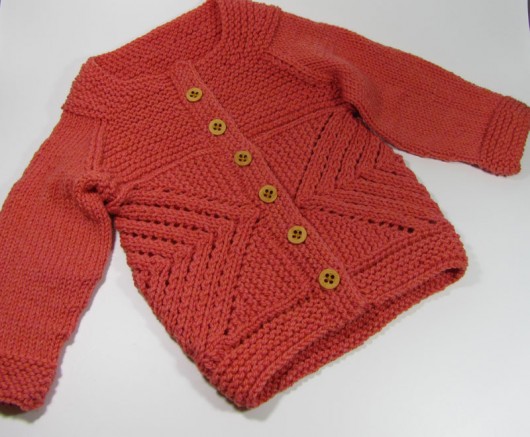 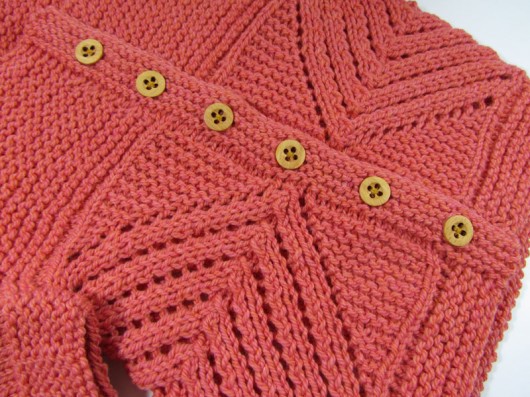 This is Emily Wessel’s new child’s sweater pattern, crossed cardigan. Wessel and Alexa Ludamen are tincanknits. The pattern includes eight sizes, from 0 to 6 months and on to 11-13 years. I was part of the test knitters’ group and really enjoyed the knitting and the experience of working with these talented designers. The pattern was a bit of a challenge and definitely needs you to keep alert. You start knitting at the center back, with a pinhole cast-on. The designers’ website gives excellent instructions for that.

Here’s the back, followed by a closer look at it: 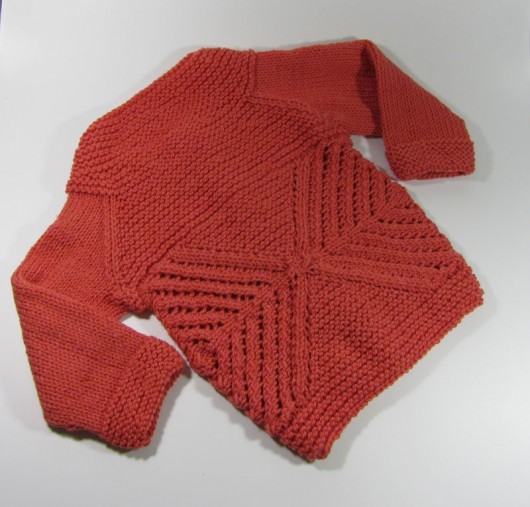 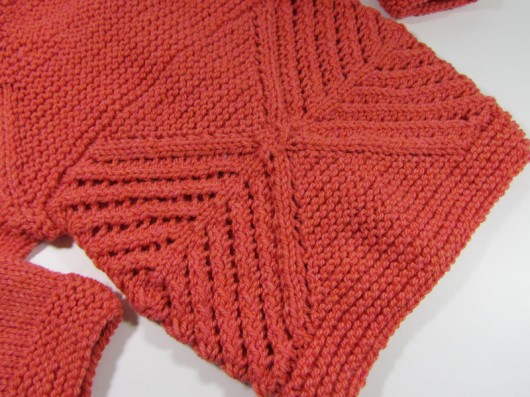 My pinhole cast-on was a bit loosey goosey, but I am still very pleased with the sweater. It’s knit in Stonehedge Fiber Mills Shepherd’s Wool, a 100% merino lightweight worsted. This apricot with subtle yellow highlights is one of my favorites of their colorways. 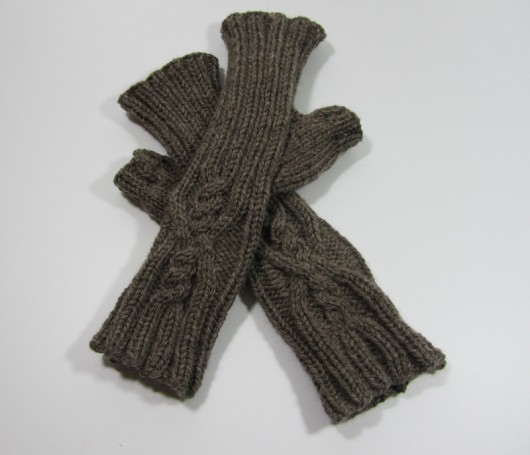 Stephen West’s “Coler” fingerless mitts look a bit odd laying on a table, what with that eight-legged spider wrapped around the wrist. But on the wrist, these mitts are wonderful. Stylish without being over-the-top. And maybe I’m the only one who sees a spider instead of just some classy cable work. 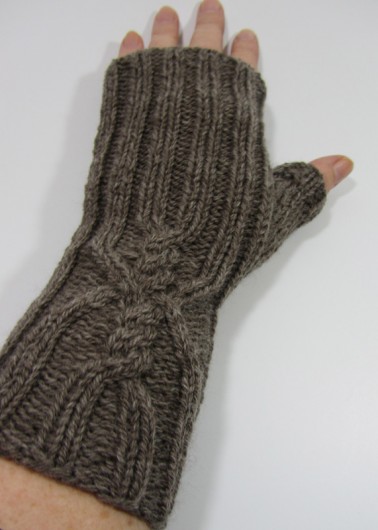 The 2 by 2 ribbing is wonderfully stretchy and will accommodate DK or worsted weight yarns and still fit most sized hands. This is Stonehedge Fibers Shepard’s Wool in the milk chocolate colorway.

A change of yarn and the mitts become quite feminine. Shown next in a discontinued Berroco 100% worsted wool version of “Vintage.” 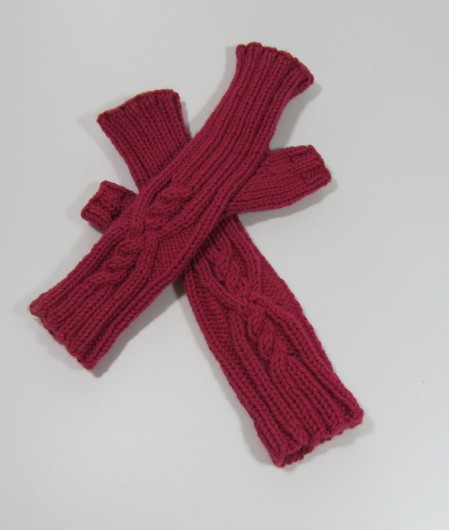 The mitts have a very nice thumb gusset, which help to situate them properly on the hands. For smaller hands, you can either shorten the mitts, or wear them cuffed. 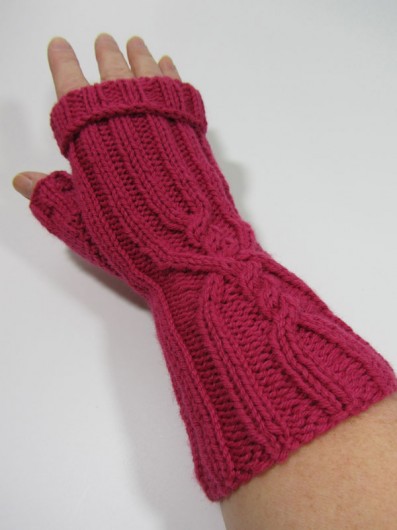