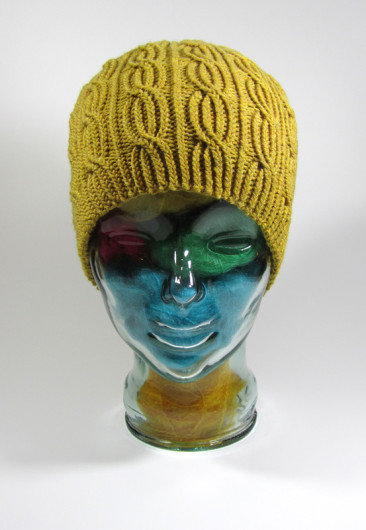 This is is Lina, designed by Johanna of Joko Knits. Lina is a free pattern available on Ravelry, with instructions in Finnish and English. Being the mono-lingual me, I used the English version. It is a great little hat, knitted here in Stonehedge Fiber’s Shepherd’s Wool DK. The yarn’s been discontinued, apparently. If you can find a supply, I give it a very positive recommendation.

Here’s Lina again, knit in Wollmeise Merino DK left over from Isaac’s Sirdar Cabled Cardigan. I finished one Lina and immediately decided to knit another. 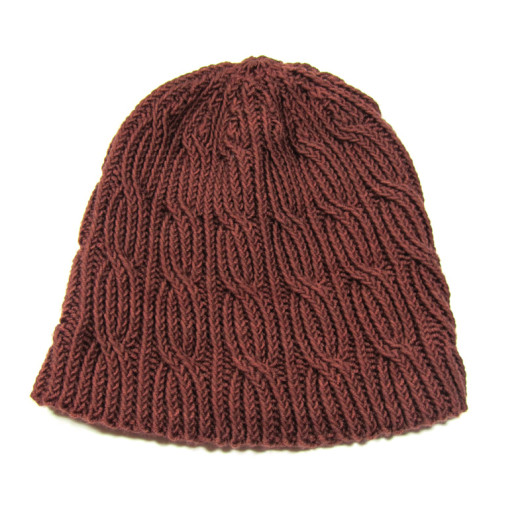 This is not brioche, by the way. Fifty-six years knitting and I’ve still not learned to knit true brioche. But it’s definitely on my “to do” list. These are twisted stitch cables.

Now that I’ve enticed you in with how cool this hat turns out, the pattern has its challenges for those (like me) not well-versed in the streamlined European way of writing patterns. Actually, there’s only one complication. Even with photos showing how to do the cabling, I just couldn’t get the hang of this cable move:

If that makes every bit of sense to you, the rest of the pattern is a snap. Go for it! 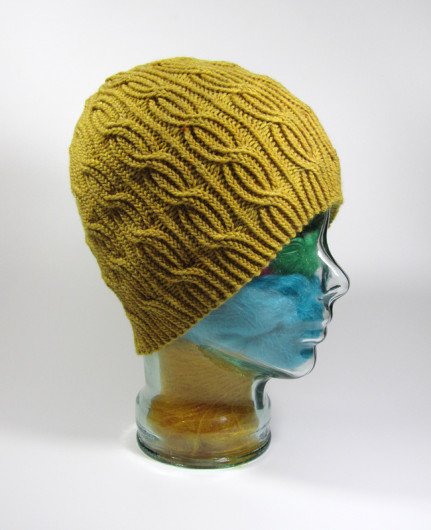 Some people, especially those (like me) who need to use a cable needle to work a maneuver like that need a bit more translation. After poking around on Raverly projects, here’s what I learned works:

I know. You’ll think that’s wrong. Because the 4 stitches worked as the first part of the cable are reversed in terms of how they appear on the needle. It will look wrong, but it will work wonderfully well. The reversal can’t be seen because the change is tucked into the twist.

It is such a blast to see what seems to be so wrong turn out to be so right.

My gold Lina is larger sized. The brown one is 120 stitches cast on and the gold is 140. 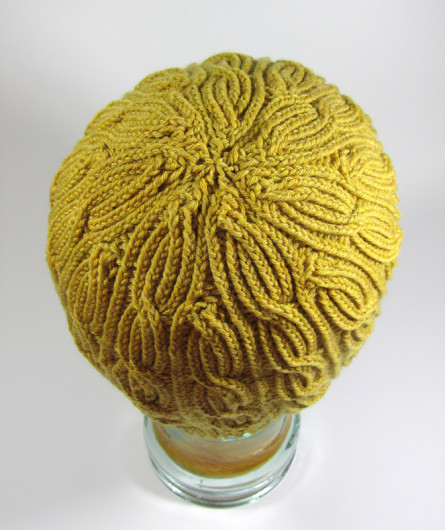 I have no problem with the way that looks. And if I’d been a bit less tentative I bet it would have looked better. Besides, the top of your head is probably only visible to the tall and they oughtn’t to be looking down on your head anyway.

Some Ravelers follow the crown decreases posted by functionalknits on Ravelry on her “Cashmere Lina for Nat” project post. Nat was awfully lucky to get that cashmere hat, by the way. And the decreases look quite nice. I tried her Nat hat way on this Lina: 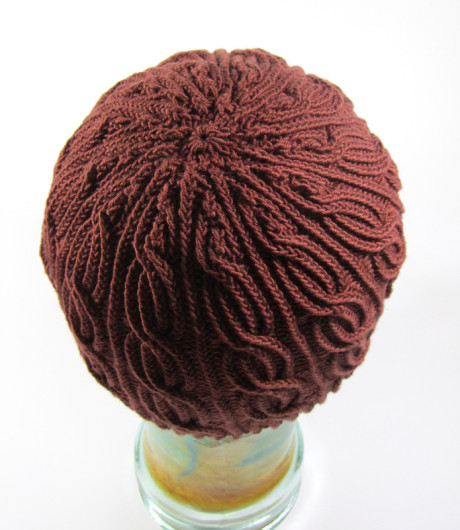 It’s a tad more organized looking, but there’s something a little funky going on at the top of the cables. I’m well-satisfied with the original. The pattern works with increases (or decreases) of 20 on the cast-on if you work the original crown decreases. But (from what I’ve read) 10-stitch incremental changes work if you use functionalknits’ crown decrease modification.

Lina totally passed under my radar for many years. At the moment there are 1753 Lina projects posted on Rav. Our knitting universe has so many generous designers offering these fine, free patterns. Lina is definitely a keeper. 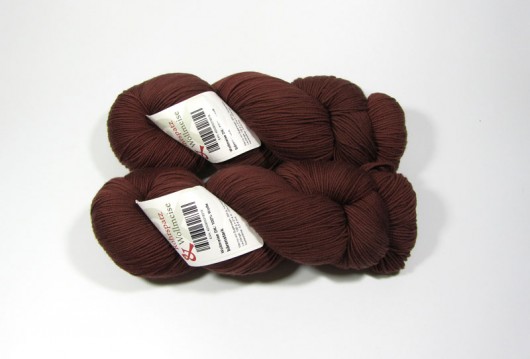 So, you start this project by watching for tweets. I’m not tuned in to tweets, unless they are emitted from our lake-side bird feeders, so in my case it’s catch-as-catch-can on The Loopy Ewe website. The Loopy Ewe is the only U.S. source for  Wollmeise. I click here and 99.9% of the time I read “Sorry, we don’t have any of these items in stock right now.” But every once in awhile, I get there before it’s all sold out.

Wollmeise is the brainchild and handchild of Claudia Höll-Wellmann. Here’s the address to her brick and mortar store:

So, if I read the map correctly, Pfaffenhofen is not too far from Munich. Bottom line? My yarn traveled far before it got to my needles.

Claudia is known for her deeply saturated colors. I haven’t worked with it often, but check out my Color Affection, my kayak shrug, and Isaac’s Vauven Sukka and baby boots. When you nearly have to take out a mortgage to buy yarn you use up ever single yard of it. In fact, I have a one inch diameter ball of bright yellow left in my stash that I will use for something some day.

So, the brown is the barenstark colorway, merino DK superwash. It’s 468 yards to the skein and skeined up so tightly you could use the skein for self-defense in a pinch. I was concerned about the tight wind of the skein when I met my first skein. But it doesn’t damage the yarn.

I wanted to make a vintage cardigan for Isaac. His mom was totally on board with the idea. It took awhile to find the perfect pattern for this special yarn and special project, but Sirdar booklet 3976 “Cabled Cardigans” fit the bill. The photos in the pattern booklet are not snazzy. But I thought I saw that it had definite potential. Ravelry only has two projects knit from this pattern. And Ravelry soon will have 5 million members, so this pattern is basically the definition of obscure. It took a leap of faith to trust that old stand-by Sirdar would deliver an error-free pattern and a cool hooded cardigan. 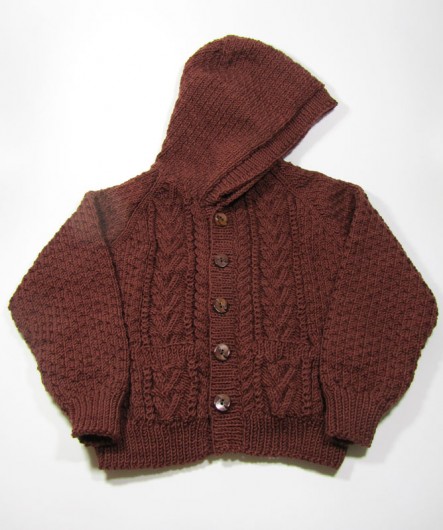 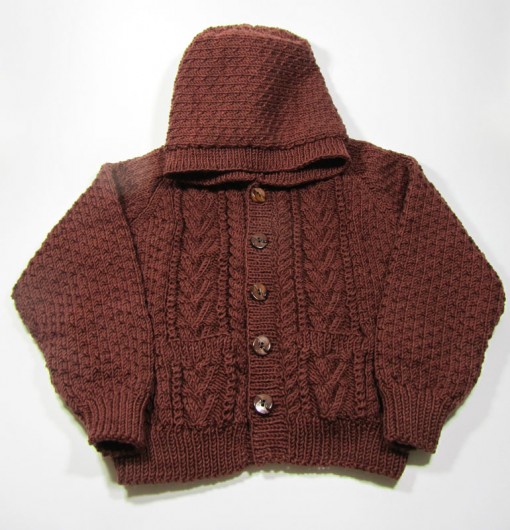 One of the comments my little sweater gathered in the Loopy Groupies group on Ravelry was that knitting for a child using Wollmeise must be one definition of love. It’s great yarn, for sure. Not really worth the price for merino, if we were being honest about it. But a 468 yard skein with no imperfections and only one knot. Great stitch definition. Deep color that stays put on the yarn, not on your hands. And all this in a superwash. It’s worth it (once in awhile.)

Here’s a view of the back. 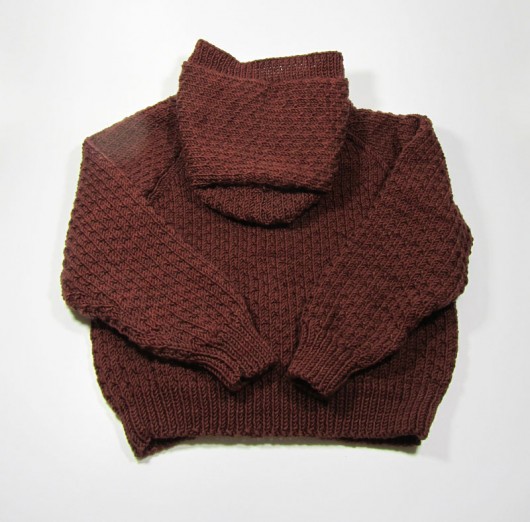 The back wasn’t pictured in the pattern. At first I was surprised that instead of cabling the pattern continued the simple textured stitch on the back. But I ended up thinking that was the right design choice.

You might like to see Isaac wearing his new sweater. Well, he was moving fast, but here he is, on his mom’s lap. The Prince of Flannel wasn’t happy about shedding his shirt for a sweater. And the sleeves need to be cuffed back for now. 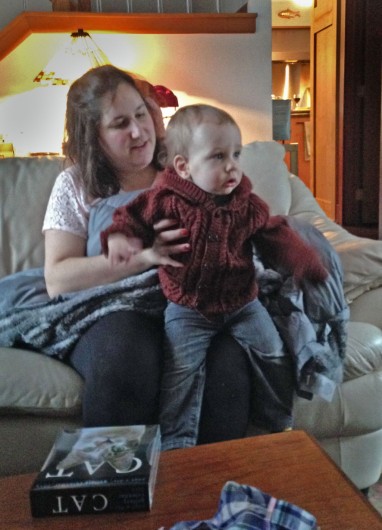 In a few years, I hope to find that this sweater is showing signs of hard use and multiple washings. There is no better compliment for a knitter than to find that the knits she’s made are worn to almost tatters!