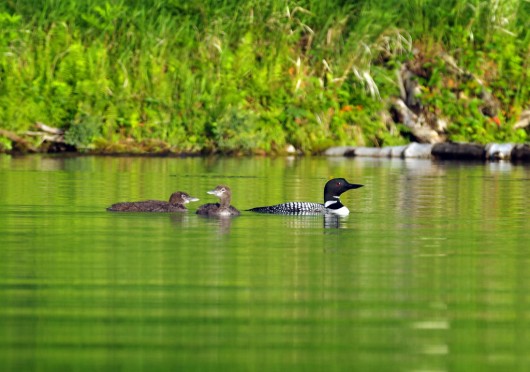 Four weeks ago, to the day, these two twins weren’t yet hatched. Last weekend they were viewing under the surface just like their parents and doing the foot waggling thing that loons do. They stray a bit away from their parents and we think they are fishing on their own. They are growing fast. Compare. Hopefully, they have grown enough that they don’t seem like a tasty morsel for a big snapping turtle. Eagles are likely still a threat, though. We’ve watched the vigilant parents diving, coming up with tasty little fish, and feeding them to the twins.

Look for the family at the entrance to Ghost Bay, on the east side of Belly Button Island, and where the waters from the narrows spills in to the big lake. They are also feeding near the big weed pile that’s sprouted this year in the first bay north of the narrows on the east side.