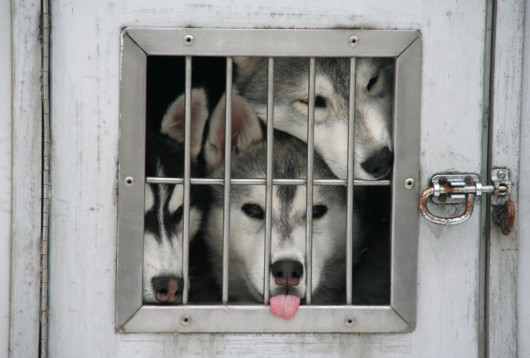 These pups were checking out race day from the confines of their large sled-dog trailer.

The Mid-Union Sled Haulers (M.U.S.H.) put on a major event at Alpena’s Thunder Bay Classic race this past weekend. M.U.S.H. is a nonprofit organization dedicated to promoting dog-sledding on an amateur level. The members work hard, and so do their dogs, to promote sled dog races as a fun, family affair.

The weekend included 1-dog, 3-dog, 5-dog and 7-dog races for adult mushers and junior events for kids from 10 to 15. We weren’t around for the skijoring event, but we’ve seen it in other years and it’s…a little hard to describe. One cross country skier working really hard. One or sometimes two sled dogs, in a specialized harness that you won’t find at your local Pet Supplies Plus, also working really hard pulling the skier along. The skier skis and poles and the dogs run and pull. Teamwork. Everything about M.U.S.H. is teamwork. An inter-species collaboration.

We only watch and it’s way cool. Before the races you can walk around and meet the teams. Even the four-legged athletes are in game-day mode, so you don’t want to make a pest of yourself. But the dogs and their humans are very welcoming even though they’re busy.

Some of the 5-dog teams were a dog shy. But check them out as they finished running the last few yards of their 5-mile course. 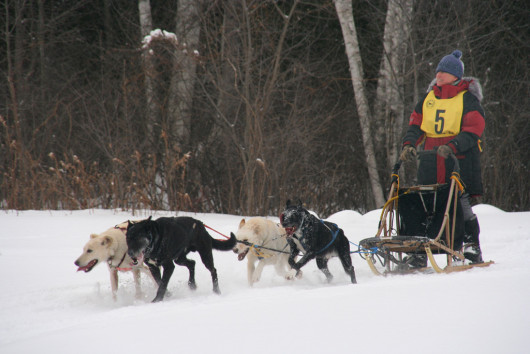 The mushers were often encouraging their dogs as they reached the finish line. And you could see the dogs put on an extra effort at the end even though most of them were panting heavily.

Here’s another 4-dog team, at the end of their race. 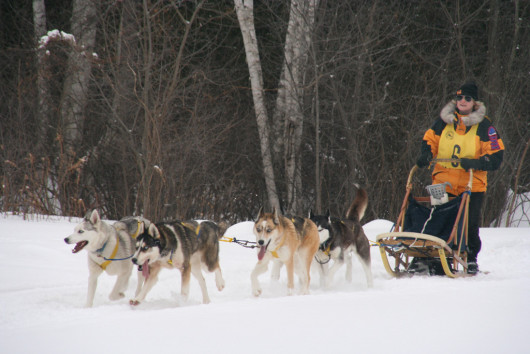 The musher carries a dog bag throughout the race. And if any dog were to be hurt, they’d be packed out on the sled by the rest of the team.

The race was on the grounds of the Alpena Sportsman’s Club this year. From a spectator’s perspective, it was a good venue. While waiting for the teams to start arriving at the finish line, you could go inside the clubhouse and warm up.

At the start of the races, you can see just how much these teams want to run. As they are placed in position, one of their humans stays at their side because it’s clear they are chomping at the bit to be off and running. Here’s one of the larger teams going full tilt even though it’s near the end of the race and they must be tired.

As they finished the race, and passed the finish line, this team stopped and stood calmly. The musher stepped off the sled and moved from one pair to the next, patting each dog on the head, brushing snow off their ears, and speaking to each one. An interesting bunch, these mushers and their dogs.

More, soon, on all the distinctive headgear that showed up at the races. Power to the puppies! Pupypwr! 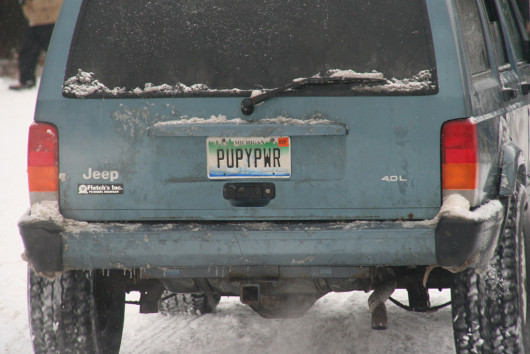 P.S. My son has moved my blog to a new host and you’ll see some improved performance. And he’s fixed that “glitch” that was keeping the photos from going into super-size mode when you click on them. So, click away, and meet the pups almost full screen-size.