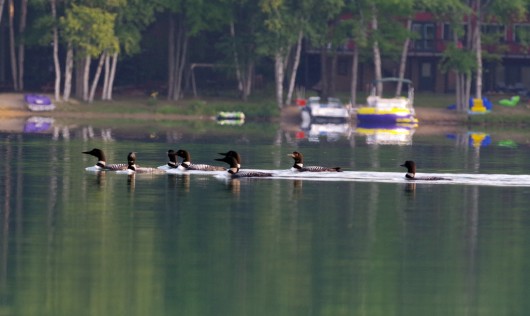 As we paddled to Ghost Bay this morning, the lake was echoing with loon calls. We spotted three flying in together, making that distinctive tremolo call that loons make in flight. There was also an unusual amount of wailing going on.

We knew what was up with all the racket when we spotted this gathering in the north section of the lake, fairly close to shore. Eight loons are shown above. But there were actually nine.

In mid to late summer, loons gather together. Non-resident loons fly in and resident loons will swim out to join them. But first, they stash their chicks someplace amid thick vegetation and then they host the gathering away from the chicks. Biologists believe that these gatherings build relationships and cooperation among mature loons.Typically, the loons will spend some time swimming together in circles with their heads cocked to one side. There is a little of that evident in the photo and we definitely saw it, though we didn’t recognize it as anything habitual until we returned from our paddle and read up on these gatherings.

The loons also spend time diving together. All nine were on the surface in a tight group. One would dive, sort of making a more exaggerated move than normal. And all the others would follow. The loons also spent a good bit of time seeming to clown around–not like the dignified loons we’re so used to. They ran on the water, not preparing to get airborne, but just moving around on the surface.

Such an interesting event. Long Lake is honored to have hosted it!

Paddling back from Ghost Bay, after the gathering had dispersed, we encountered this one lone loon. It was very calm and approached close to our kayaks. 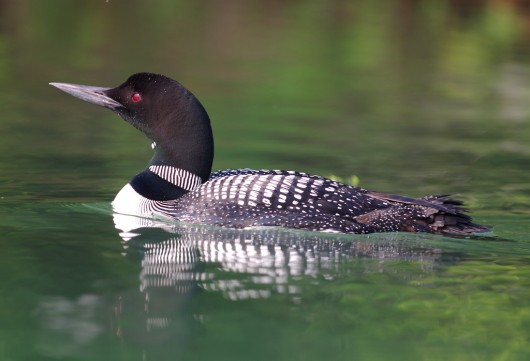 4 thoughts on “We’re getting to be a party lake!”