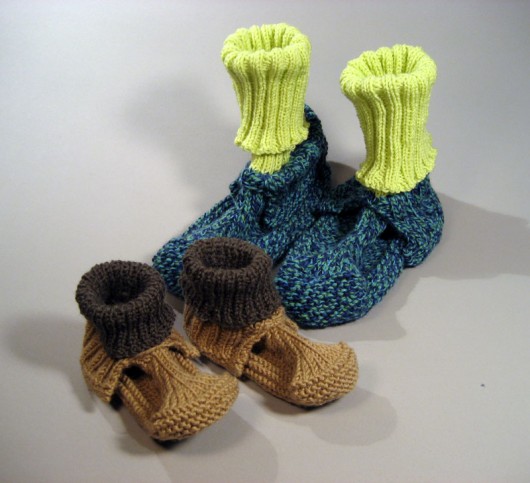 Whenever I knit multiples it’s a good pattern.  Vancouver, Washington’s Rebekah Sturtevant (a/k/a Bekah.knits) has come up with a winner.  Her Moc-a-socs, in both adult and baby sizes, combine a comfy slipper with the top of a sock.  For little ones, this is footwear with staying power.  They won’t kick off easily.  For grown-ups, they are cozy as can be.  Coat the soles with some non-skid product if home has non-carpeted floors because taking a flying header is probably not what the doctor ordered. 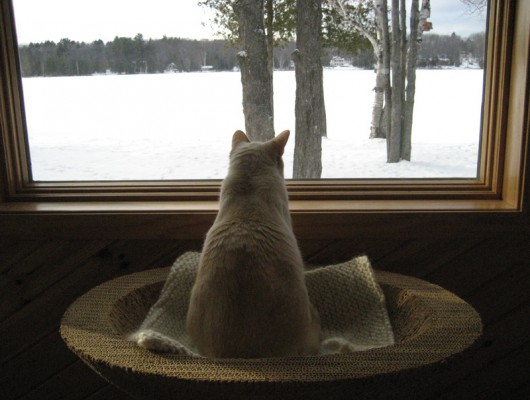 Hoover, the cat.  He is one, so it always seemed best to leave him home.  Around his stuff.  Where he knows where his everything is.  And isn’t.  For more than three years now, we’ve always left him home.  He likes, and we like, his reliable cat sitter.  But we decided Hoover might like the lake house.  We will be here for five or six days.  It’s winter and we wouldn’t need to leave him for hours while we do fun stuff on the lake.  We have bird feeders.  We have birds and squirrels at the feeders.  Birds and squirrels.  Birds, Hoover.  You will like the birds.  And squirrels.

Hoover only stayed under the bed in the back room for about half an hour.  He only stayed hiding under his blanket for another half an hour.  Then he got interested in the place.  Really interested.  In everything.  In everything several times in a row.  He paced the perimeters of the main rooms.  He looked at himself in the mirror.  Over and over.  When morning came, he watched birds and squirrels from various vantage points.  Three days and a few hours later, he seems to be  acclimated.  We think he likes the place.  We know he likes the birds and squirrels.  He’s already found favorite spots.  In his “Kitty Pod.”  Sitting on an end table that looks out onto the deck.  Sleeping on the flannel sheets with colorful fish on them.   His ears twitch while he sleeps and dreams.  Betcha he’s stalking birds and squirrels. 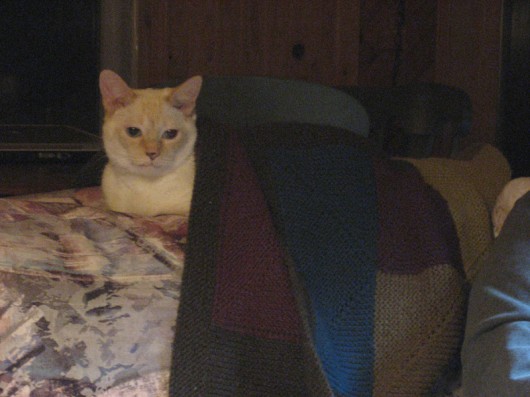 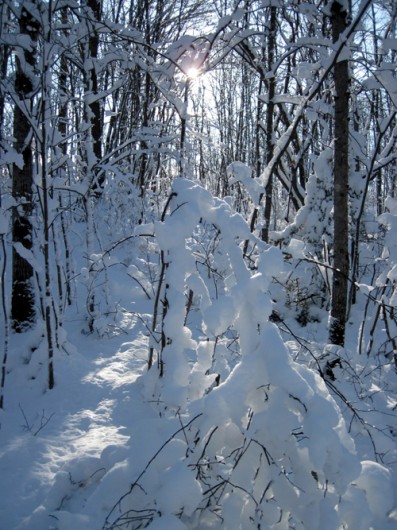 The woods stuffed full of snow.  The heavy wet snow that sticks to everything.  The sides of trees.  Your boots.  If you laid down to make a snow angel you would sink about ten inches.  If you made a snowball, leftover snowball would tangle in the wool of your mittens and dangle in clumps. Animal tracks get all elongated, like the animals are dragging their feet.  The two-track almost disappears.  This is December. 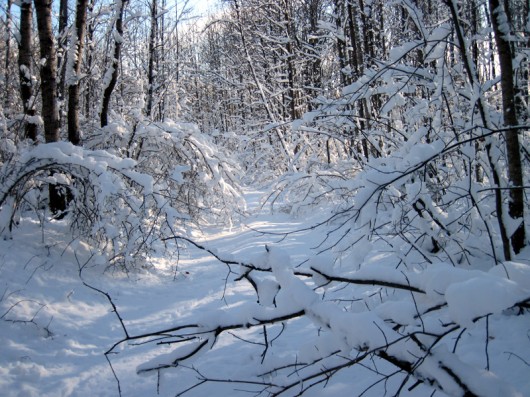 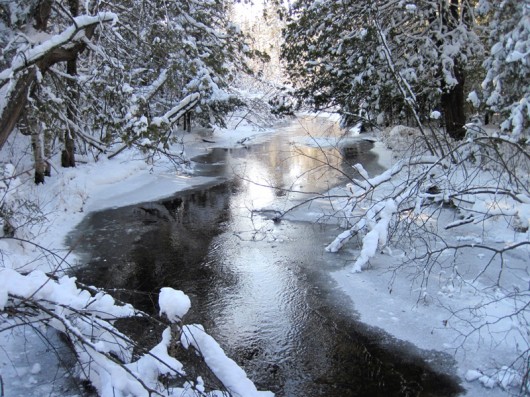 This is a section of the north branch of Thunder Bay River, just northwest of Long Lake, north of County Road 628.  But I didn’t tell you that.  It’s way too pretty a place for many people to know about.  A rickety wood plank bridge is the only way to get over the river at that point.  Probably no one should drive a car over it.  Probably it’s best no one even walks on it.  In fact, you shouldn’t even come near it.  This was December 12th, after a ten inch snowfall.  The river is just beginning to ice.  Tree branches heavy with snow bend into the river.  Then the river grabs them and holds them fast.  It is tempting to free a few. 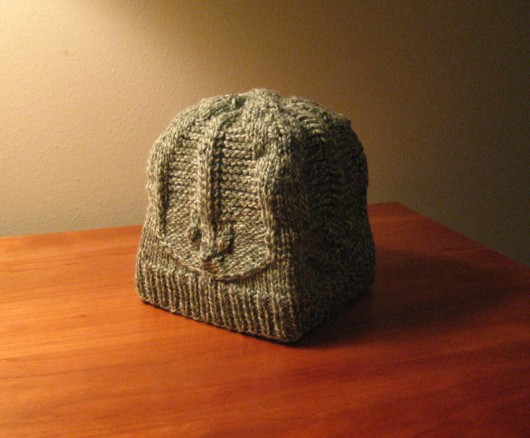 Sometimes I knit something just to say I’ve done it.  I once knit a Frilled-Neck Dragon for that reason.  I mean, how many people can say they’ve knitted that?  I’ve knit hippos in tutus and entire herds of ponies.  Anyway, this hat sort of captivated me.  It was designed by  Hannah Ingalls.  It is a free pattern available at the on line magazine Knitty. There is an entire Ravelry group devoted to sharing the experience of knitting trilobites.  So long as you know how to read charts, it is an easy and satisfying knit.  Now I can say I’ve knitted Trilobites.