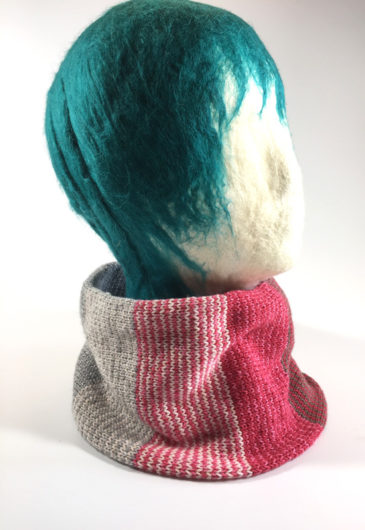 This is a Lux Adorna free pattern, Hillary Cowl, knit in 100% Lux Adorna cashmere goat. Lux Adorna takes care to say “cashmere goat” and since I don’t know much about cashmere, I’ll not edit that out. Some cashmere maybe isn’t from a goat? Ah, wrong. Wikipedia says that cashmere, the fabric, comes from “the neck region of cashmere goats and other goats.” So, some cashmere is from those kind of goats that you meet at petting zoos or my brother’s barn? 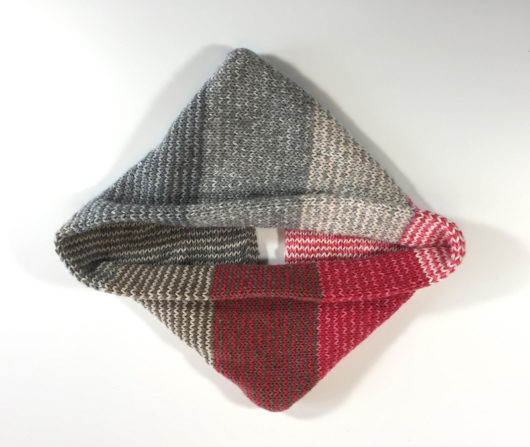 Well, Lux Adorna cashmere must have come from the very soft neck fibers of goats who never lived in petting zoos or my brother’s barns. Because this stuff is soft. 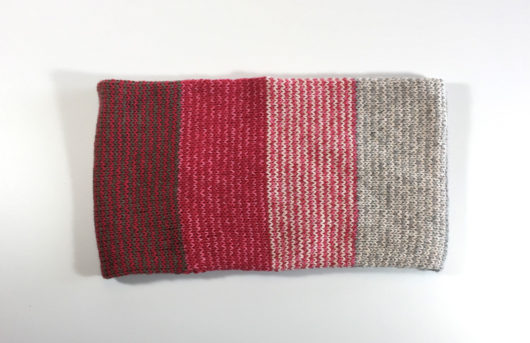 And the Hillary cowl is so super cozy and special that I decided I will be selfish. It will stay with me. Just to be sure I’m not tempted to be generous, I’ve already worn it and it is luxurious.

This is what my yarn string of Lux Adorna looked like before I unpacked it. 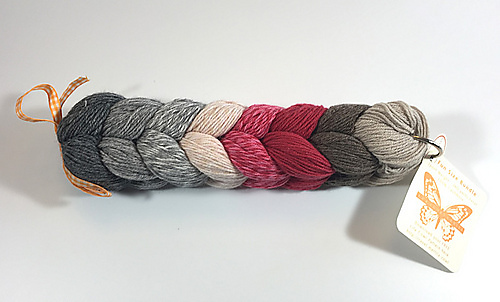 It’s not possible for a knitter, especially one on a knitting retreat in Door County Wisconsin, to pass up a string of yarn that looks this special.

Now, for leftovers. Every bit of this special stuff needed to be knit. So Evelyn’s dolls now have a new sweater, modeled here by my mother’s Tracey Gallup pottery lamb. (My mom loved that lamb when I gave it to her one mother’s day long ago.) 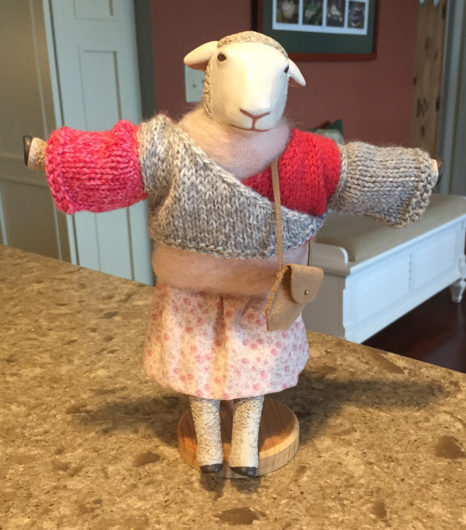 Lambie is modeling Julie Williams’s free Ballerina Wrap Cardigan. In the original, the cardigan is all pink and all ballerina. My version is more a ballerina who shops at Good Will. But I like it. And so does Evelyn. Her stuffed toys and dolls are doing a lot of “ahhh….” since they’ve not experienced cashmere before. Actually, so am I in my Hillary Cowl because I’ve never worn 100% cashmere either. 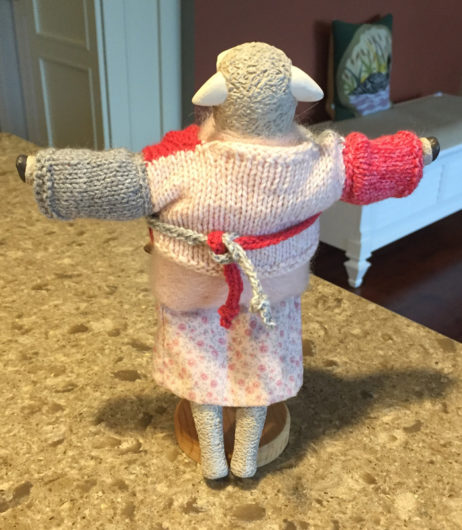 While we’re talking about irresistible yarn presentation, this one from ATHC Wools is right up there with my cashmere string, 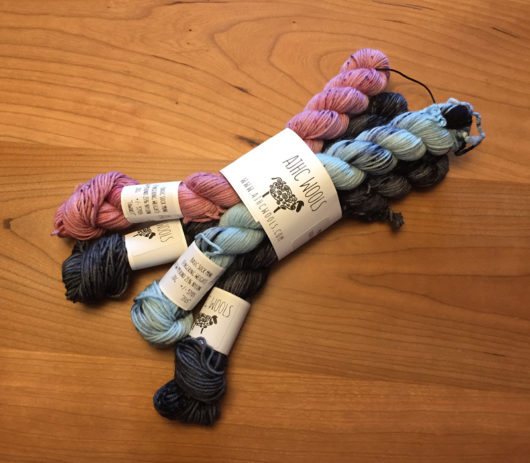 I found AJHC at a booth at the 2018 Northern Michigan Lamb and Wool festival. I walked away. I came back. I walked away again. Then I walked back, gave in, and bought this sweet bundle. It was displayed knit into Caitlin Hunter’s Cardamom Coffee hat. That looked pretty good to me so I hightailed it home, bought the pattern on Ravelry, and cast on. 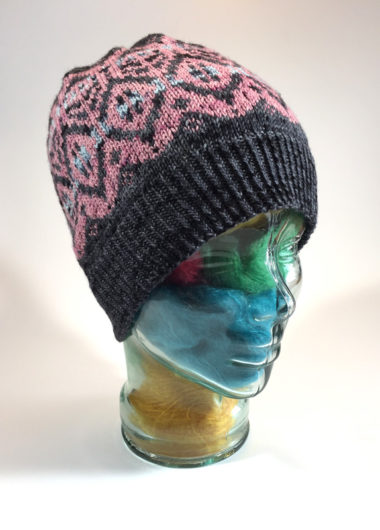 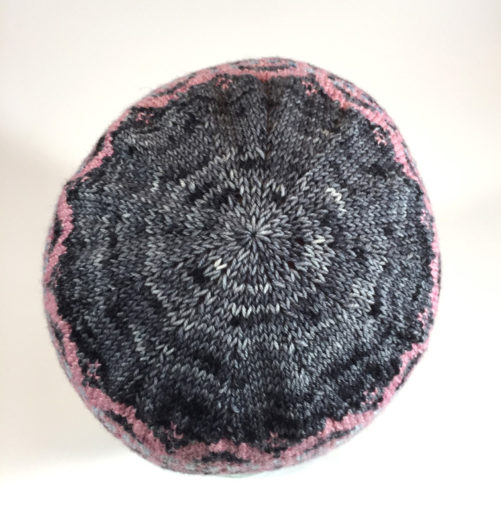 Here’s one more look and then we’ll get to the leftovers. Because Lambie is very excited to be modeling Evelyn’s new AJHC doll dress. 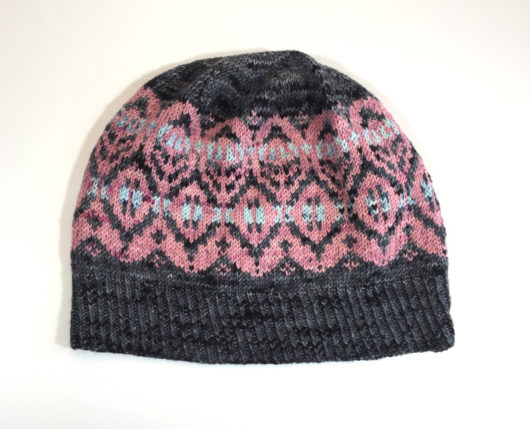 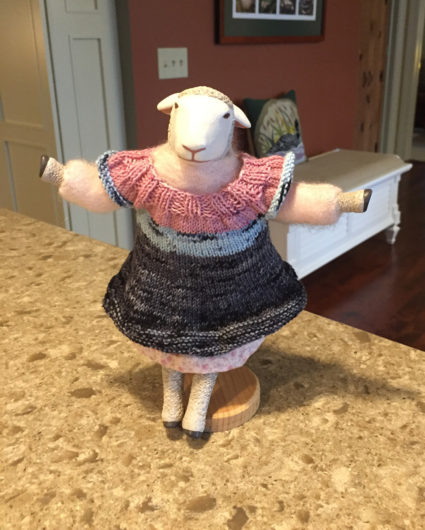 Ok. Evelyn’s version isn’t stripey. But it is everything else: cute, easyon-easyoff, pretty, stylish. Perfect. I had to speak sharply to Lambie to get her out of it. She was pretending to be stiff as a board when I know full well that her front legs bend at the shoulder. 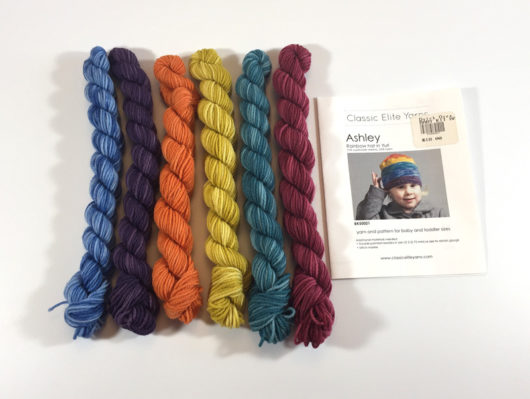 Ashley, the pattern, is supposed to be knit in distinct stripes and is billed as a rainbow hat. Being kitted with six colors rather than the seven colors of the rainbow bothered me a tad. Plus I’ve been enjoying some fade knitting lately, where one color fades slowly into the next. I decided to do a fade Ashley and I’m very pleased with the result. 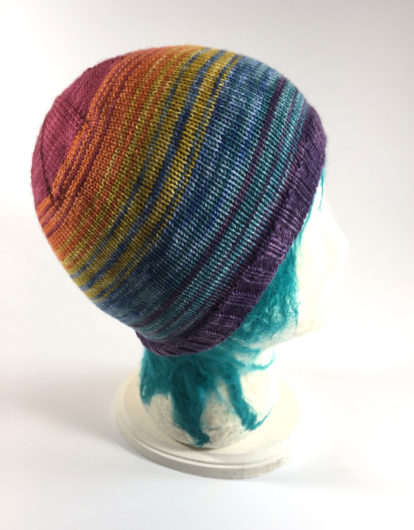 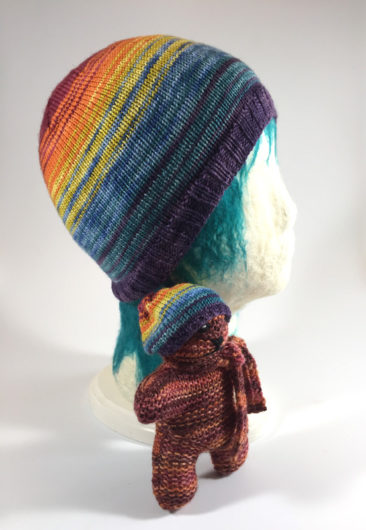 Evelyn, chapped lips and all, loves her new hat. She immediately rescued Strelka the Valiant from her bed. He was already wearing a pink handknit sweater and it turns out his Ashley hat is a perfect fit too. 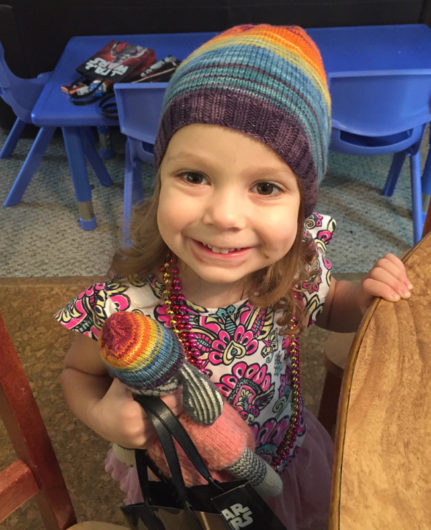 Sometimes, just as with Thanksgiving dinners, the leftovers are definitely as good or better than the originals. 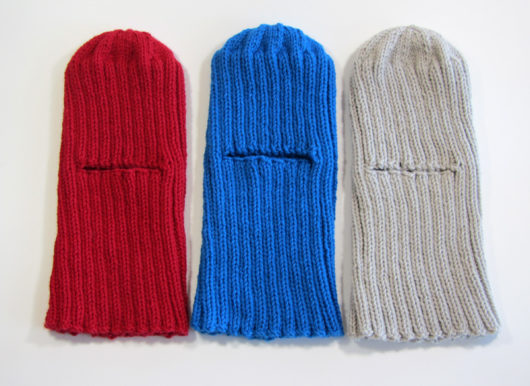 Some folks, often but not exclusively the young ones, complain about “scratchy” hats and other articles made of wool with wide selection of the same. I knit these balaclavas in Berroco Vintage and the grandkids are all smiles. (You can tell by Evelyn’s eyes that she’s smiling.) No scratchiness. It’s possible some of the smiles are because the children decided these balaclavas are actually Lego helmets. 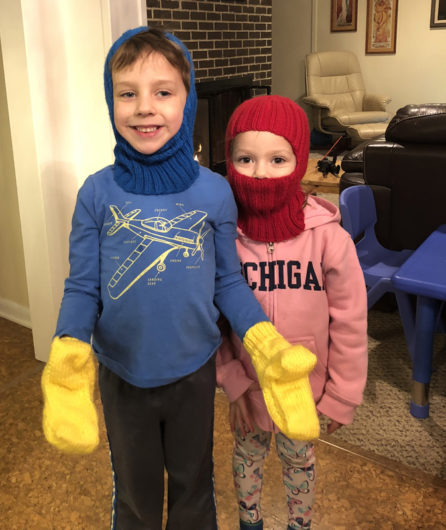 This is a Carol A. Anderson pattern from pages 6-7 of Cottage Creations booklet R18, “More Projects for the Community and Family.” It’s a super easy ribbed facemask that stretches to fit all the sizes heads come in. These are the youth size. Seventy grams of Vintage gets the job done.

And when your granddaughter is no longer wearing her balaclava, she can put it to all sorts of other uses. Like swaddling a wolf stuffed buddy. 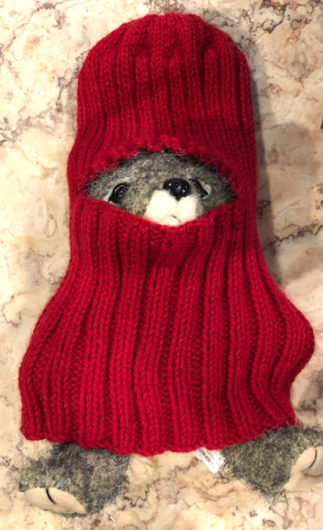 Or as a peekaboo spot for her Snow White action figure. 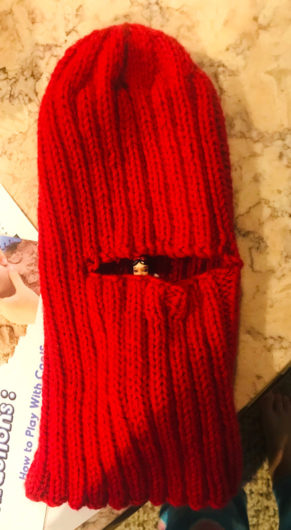 Kids definitely know how to have fun with hats.

With the extra Vintage I knit a less-than-beautiful, but totally non-scratchy Wherever It Points. This hat is a freebie from Darn Knit Anyway. 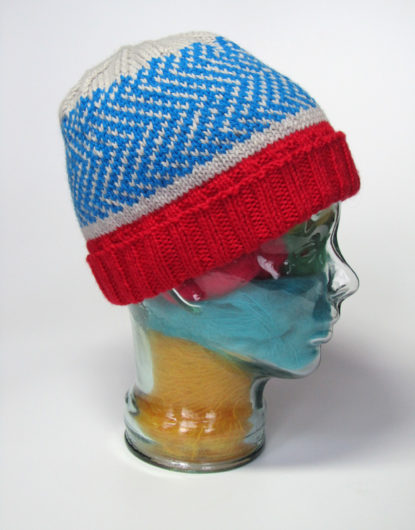 Please don’t hold my gaudy rendering of this fine pattern against it. Some of the projects on Ravelry are stunning, You can find Customized Wear – Richardson hat dealer. In fact, here’s another I made, this time using Berroco Comfort. Comfort is a 50% acrylic 50% nylon worsted. So no pitiful little voices will accuse that their hat is scratchy. 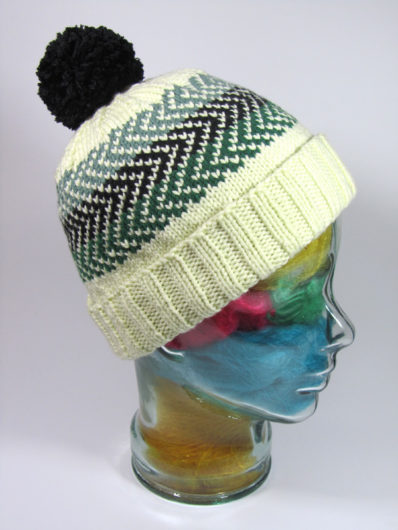 Now that is a fine hat. With an excellent non-pointy crown. 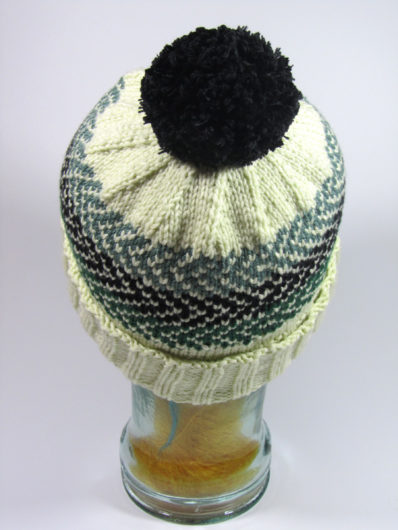 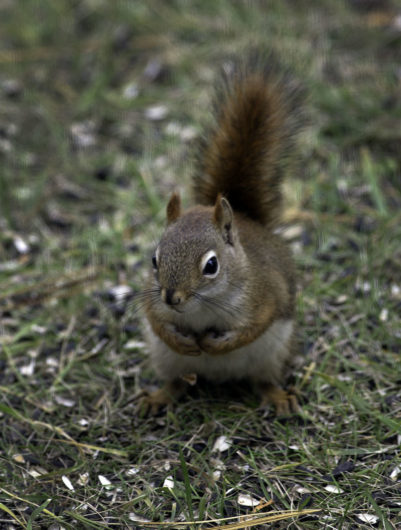 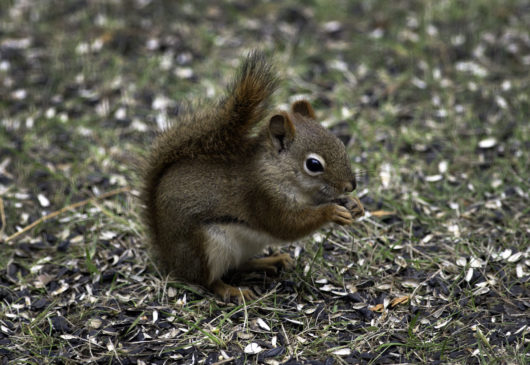 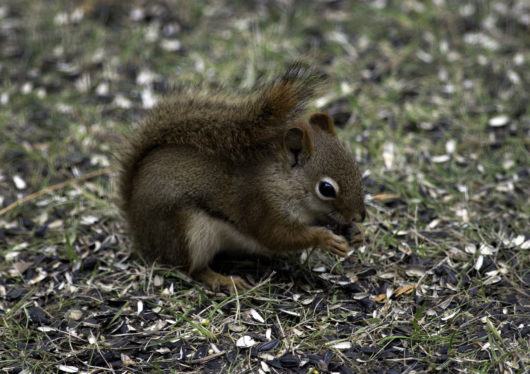