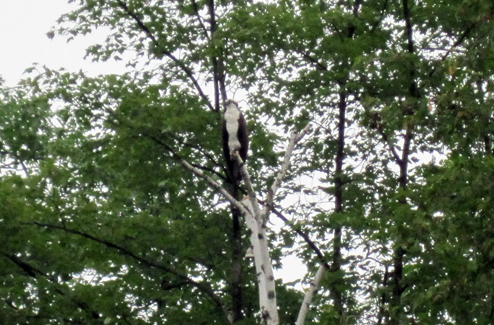 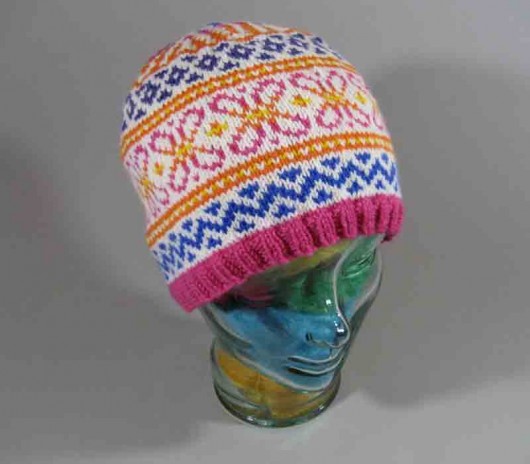 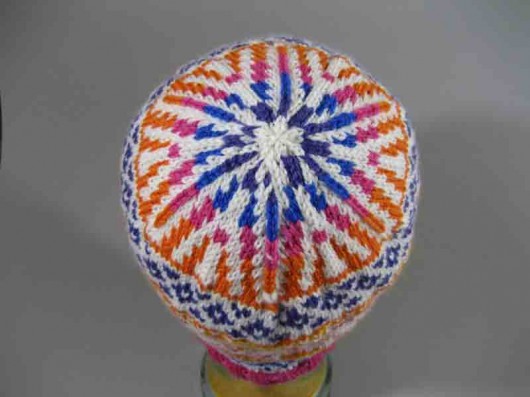 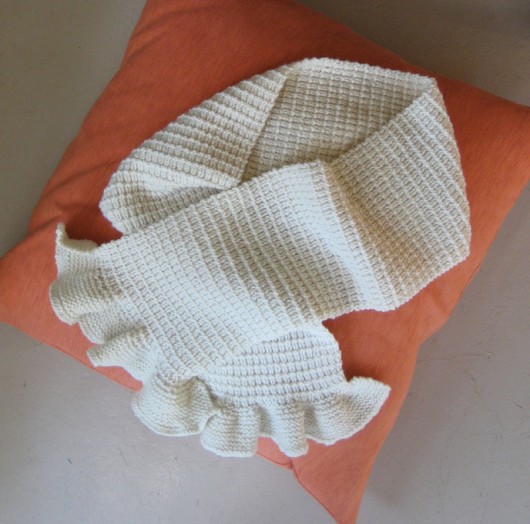 This is Ruffled Scarf, designed by Cathy Carron. It’s knit in hurdle stitch, something I haven’t seen used in many patterns.This oldie but goodie is a 4 row repeat, on an even number of stitches. The first two rows are knitted and the next two rows are knit 1, purl 1 across the entire row. Obviously, the ruffles are knit in garter stitch. Best of all? You end up with a totally reversible scarf that looks different (but nice) on both sides. Worst of all? It gets boring after awhile. I knit mine in Paton’s Classic Wool. The pattern calls for a 48 inch scarf. With about 470 yards of wool, mine ended up at 56 inches, which I think is a better length for a scarf. The ruffle  is a sweet, retro touch.  I think Mary Tyler Moore would like it.  Or at least Laura Petrie. 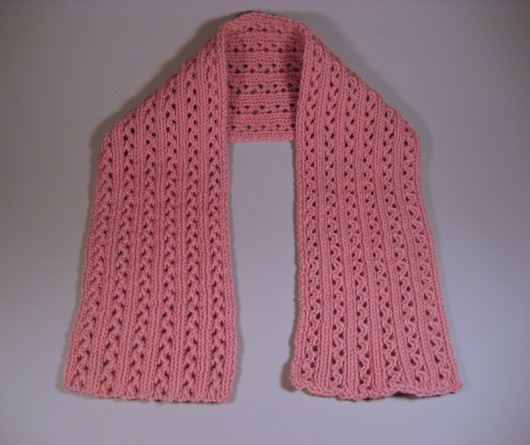 This one is the sensibly-named Eyelet Scarf, designed by Lisa Bucellato. It’s knit in Cascade 220 wool. I usually knit little pigs out of this yarn, but a little scarf is OK for a change. The scarf is about 5 inches wide and 40 inches long. A one skein project. Looks nice on both sides.  Meant for an adult, but my sense is it’s not quite long enough and it would be great for a kid. As the book title says, definitely a quick knit.

This is the Wave Scarf. It took about 430 yards of Kramer Naturally Nazareth. (That’s Nazareth, Pennsylvania). It was not a particularly quick knit.  Knit 1, purl 1 rib never is.  The design is Debbie O’Neill’s. It was a bit troublesome to knit. At the beginning, the increases and decreases held my interest. Then I got cocky and made mistakes. Then I got bored and made even more mistakes. Then I got miffed with the ripping back. But, persistence paid off and the finished scarf is worth the effort. This is a very long wave. The designer suggests 68 inches. For me, that was mid-wave, so mine ended up about 72 inches long. There is one error in the chart: the stitch count is not going to come out correct unless you skip rows 83 and 84. With that correction, it worked well.

And, in case you are wondering why I decided to knit three wool scarves during a summer of mostly hot sticky weather, it is a mystery to me too. 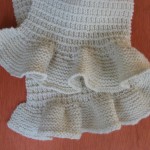 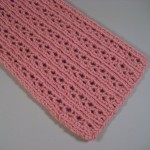 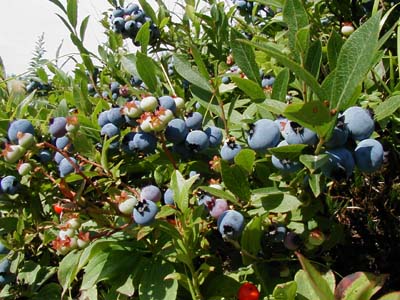 Off of Boneyard Highway (don’t ask), grows a fairly large stand of low bush blueberries. Low bush blueberries grow on bushes that are about a foot and a half tall. The berries ripen in late July and August. They grow in clusters of several berries, at the end of the branches.

This weekend, we picked wild low bush blueberries. Actually the me part of we took a nap instead and was not, technically, in attendance at the Boneyard Highway blueberry pick. My job came later. Steve, Dan, Mel and Roxie the Chocolate Lab set out armed with info to be sure they didn’t end up picking something deadly like nightshade berries. Mindful to watch for poison ivy and  bear (neither were spotted), they picked about three pints of low bush blueberries.

The fruit of low bush berries are smaller, with a somewhat deeper blue skin color than the high bush berries typically sold in supermarkets. The inside of the low bush berry is more like the Crayola color “red violet” than blue. The two kinds of blueberries don’t taste the same. High bush blueberries taste sort of like lima beans without the pretty green color. It must be all those antioxidants. To my mouth they are a waste of chewing. But these wild blueberries are nothing like lima beans. They have a definite good taste. Tart. Interesting. You know they’re in your mouth, but not because you want to spit them out.

Once home, Mel and I picked through the berries and got rid of the rest of the stems and checked for any tag-along little critters. Then came my job. Half the blueberries in a saucepan with about two tablespoons of water and half a cup of sugar. Bring to a boil, and then let the mixture simmer for about ten minutes–longer than you would with their high bush cousins. Add the  2 tablespoons of cornstarch and two tablespoons of water you whisked together before you put the blueberries on the burner. Add one tablespoon of lemon juice. Stir constantly, for about a minute while the mixture thickens. Fold in the rest of the blueberries. Pour the filling into whatever crust you’re using. Let it sit for about an hour before you put it in the fridge.

We served our most natural dessert slathered up with that most unnatural topping, Cool Whip, the invention of  Kraft chemist William A. Mitchell. Truly better eating through chemistry.

For those reading my blog for a slice of Pure Michigan instead of pie, Michigan is the #1 state for production of highbush blueberries. We have more than 18,000 acres in blueberry production. If you click here, you can get a bushel and a peck of Michigan blueberry facts and even meet the MSU Small Fruit Team. If you are really into blueberries, you can attend The National Blueberry Exposition in October in Grand Rapids, Michigan.  And, at this very minute, the 47th Annual National Blueberry Festival is happening in South Haven, Michigan.

Here is my pie.  They don’t happen often in my kitchen. 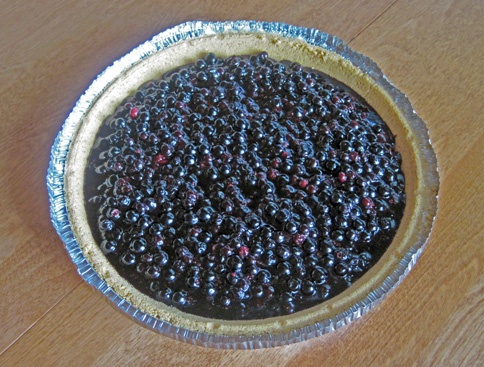 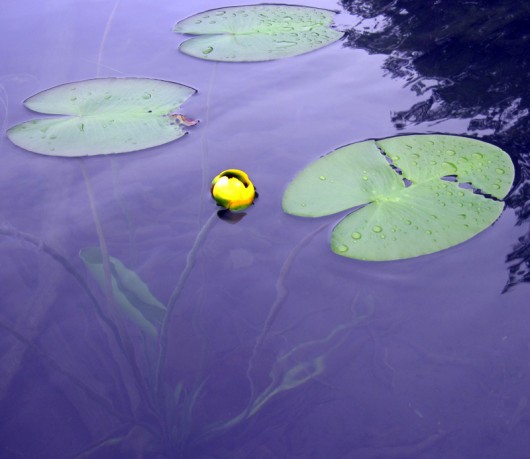 Spatterdock. Cow lily. Yellow Water Lily.  Nuphar Lutea. Most of what they are is underwater and not easily seen. They grow from rhizomes buried in the mud at the bottom of shallow sections of Long Lake. The Narrows and Ghost Bay are  home to our main colonies. Both are also home to the more delicate fragrant white water lily. And colonies is the right term. The rhizomes spread and pretty soon a shallow lake could be up to its eyeballs in water lilies. The rhizome sends up stalks. Most of the spatterdock leaves, at least the biggest ones, float on the surface. They are perennials–dying back in the fall and sprouting again each spring.

Traditional medicine finds uses for these plants. The stalks are edible, but are sometimes very bitter. The seeds are edible and can be ground into a flour. I recommend taking a pass on Spatterdock muffins, though, unless you’re really really hungry. Beavers and muskrats dive down to eat the rhizomes. Beavers, and all kind of waterfowl, will also eat the seeds. As you would notice paddling around the lake in the summer, one common use of the leaves is as an incubator for frog and bug eggs. Long Lake’s dragonflies and damsel flies often use the leaves as resting places. They helicopter down and don’t even make a dent in the leaf when they land.