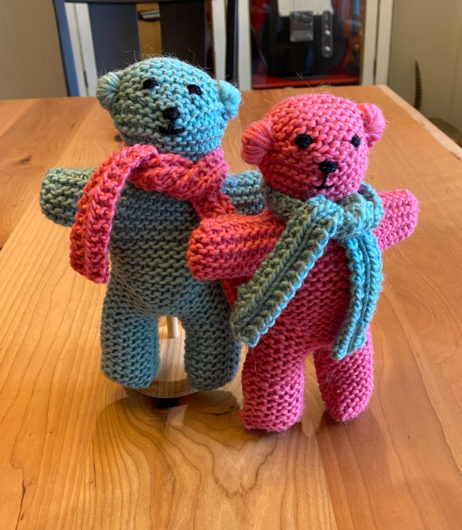 I live on what Michiganders (don’t laugh, that’s what we are) call the “Sunrise Side.” That’s the northeastern section of Michigan’s lower peninsula. Almost all the sections of the Sunrise Side are less affluent, more rural, just a wee bit less scenic (being honest now) than the western side of the northern lower peninsula. We have our share of big homes, beautiful homes, interesting shops, and jaw-dropping natural views. But we also have a lot of children taking backpacks of food home for the weekend. And my town has more vacant storefronts than occupied ones.

After I worked out the pattern for this little guy, Sunrise Side Bear seemed the best name for it. The pattern is free on Ravelry.

My pair of fraternal twin bears is knit in Brown Sheep Lamb’s Pride Worsted. In this beefy worsted, knit at a tight gauge on size 5 needles, they turn out to be about 9 inches tall and 6 inches across the arms. 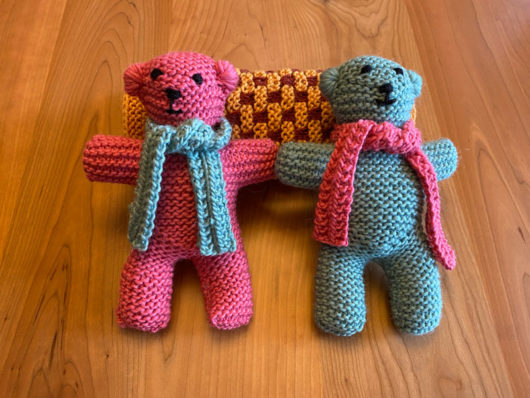 Sunrise Side Bear is knit flat. Totally flat. In one piece. His face, head, tummy, and butt are formed by short rows. In case you’ve not yet learned how to work short rows, all the instructions are included.

These little guys just keep leaping off my needles. Even with sewing up and stuffing I complete one in about 4 hours.

Here’s another one I recently knit for newborn Sophia. Again I used Brown Sheep Lamb’s Pride. 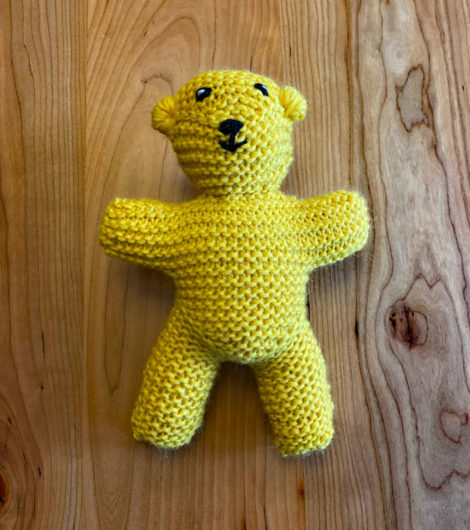 I like to gift them wearing duds of some sort. For a newborn, a scarf seemed like a bad idea. Instead, I knit Georgie Nicholson’s Dolly Milo. Dolly Milo, knit in DK weight, is actually designed as a vest. But Sunny wears hers as a dress. 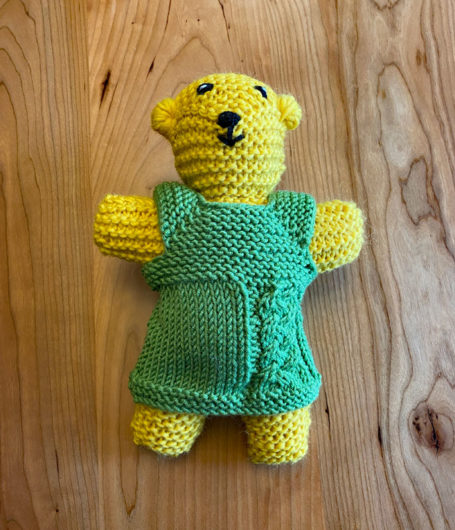 Sophia also received her own Milo vest. Hers is knit identically to the doll’s version, but I chose a different cable panel. 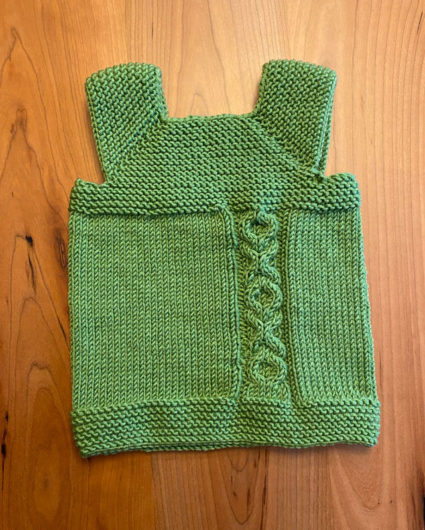 I knit the vests in Debbie Bliss Rialto DK. The set made for quite a sweet newborn gift. 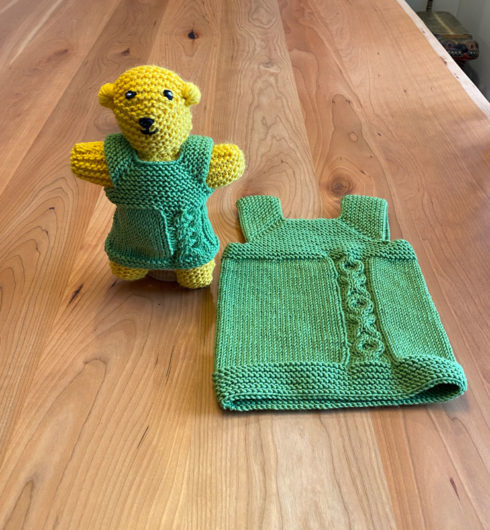 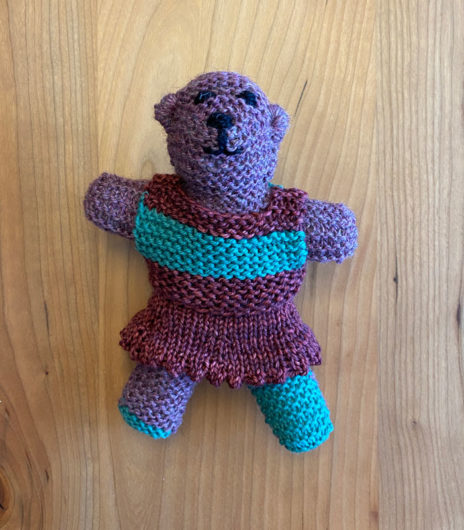 Running out of yarn created a patchwork bear. And once my bear already had a green front leg and a green front foot, it seemed to need some clothes to blend in the mish-mash.

I am inordinately fond of this little guy. 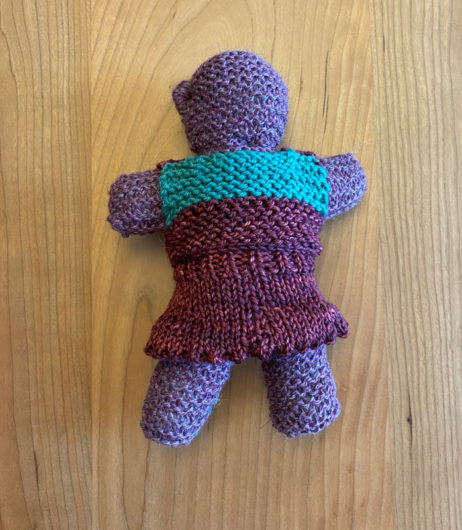 Read more about the Sunrise Side Bear’s construction here.

Stay safe, everyone. Knit on! 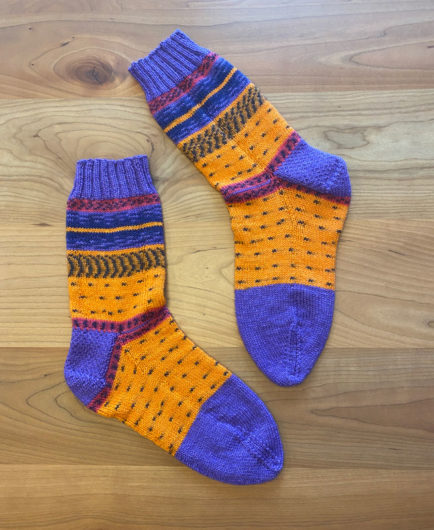 We’re all looking for something homey and comfy to help sooth that savage beast who wants to yell “enough already.”  Knitting stuff for feet, actually knitting anything, will help us knitters stay grounded in trying times.

This is a pair of socks I knit from one skein of Schachenmayr Regia Arne & Carlos Pairfect. There’s a pattern inside the ball band. It’s printed so tiny I had to get out the magnifying glass that I use to read the warnings on pharmacy products. Once I read it I saw it was just your basic sock pattern, so I decided to rely on a pattern that I could read easily: Vanilla Latte socks by Virginia Rose-Jeanes.

Vanilla Latte is a Ravelry freebie that over 14,400 Ravelers have knit and posted on their project pages. It’s a bit of a sock recipe, where you pick your heel style and your toe style. I picked an eye of partridge stitch for the heel and what the designer calls a “rounded toe wedge.” This pre-dyed yarn isn’t going to show up properly without stockinette. So I worked the rest of the sock plainly, instead of relying on the pattern stitch that is the signature of Vanilla Latte. I guess I made a very plain Vanilla Latte. 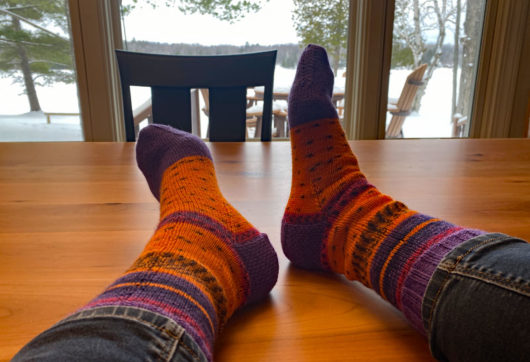 When I saw the pattern for Katerina Mushyn’s Two Needle Socks appear on Ravelry I quickly acquired some bulky yarn and set to work. The pattern calls for Aran weight, but I figured I’d be using these as slippers or boot socks and I wanted to knit a tight gauge. So I tried a new (to me) bulky yarn, Sirdar’s Harrad Tweed Chunky. It was ridiculously discounted and I figured I’d give it a go. The yarn is very messy to work with, because slubs fly all over the place, so I can’t recommend the yarn. But the socks? Well check them out.

First, let me show you my feet wearing my new socks. I’m doing this to convince you, from the outset, that this pattern really does work. 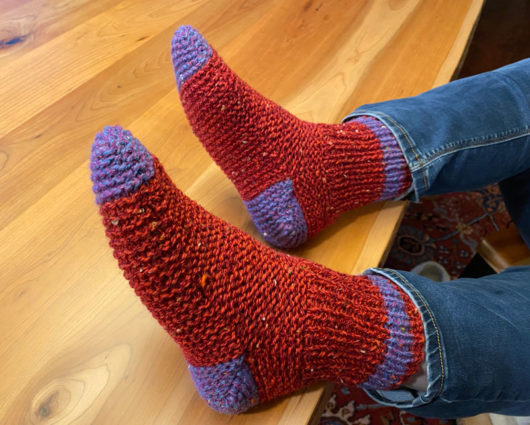 This pattern results in a sock that is a good fit for human feet. But here’s what you have when you complete your knitting. 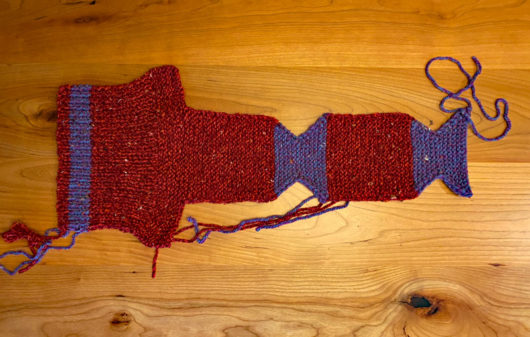 I just had to knit them to see how that turned into this: 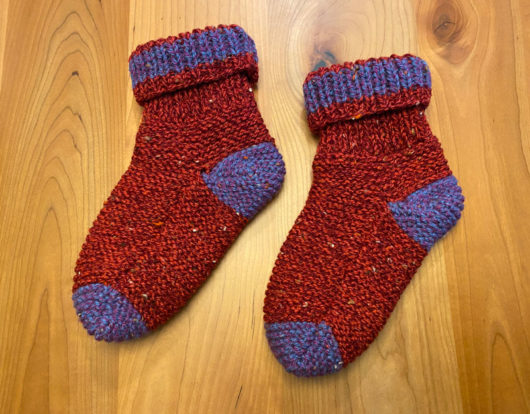 As you can tell, there’s a fair bit of sewing to pull this off. It’s nothing challenging though. They aren’t going to win any beauty contests, but they were a hoot to knit! And the pattern is a Ravelry freebie.

The Russian designer’s English version of the pattern is easy to work with. But if you have any trouble, I very much enjoyed her video on how to knit the pattern. From watching the designer’s video and examining her sample before it’s sewn together, it’s clear that the designer slipped the first stitch of each garter stitch row (purlwise) and purled the last stitch of each garter stitch row. That’s what the English pattern is referring to as the “edge stitch” in the decrease and increase sections (the toe and the heel). The instructions for sewing the socks up are especially useful and that starts about 19:45 minutes into the video. Knitting hands speak a language we all understand.

These past few months have also found me replenishing the big guys’ bootie supply. That doesn’t sound right. I’ve been knitting Kris Basta’s freebie Better Dorm Boots. Versions of these dorm boots have been kicking around the internet from the early days of the old Knitlist. I like Basta’s version. My only modifications are that I use a chunky weight yarn rather than two strands of worsted. And I knit the ribbing through 60 rows rather than 45 because I like them cuffed.

My favorite yarn for these best dorm boots is Plymouth Encore Chunky. The 75% acrylic 25% wool makes for easy care. 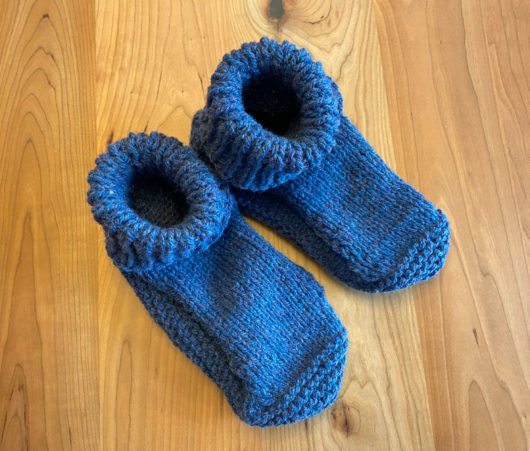 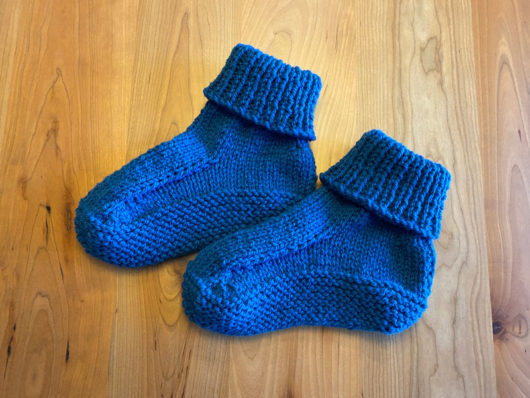 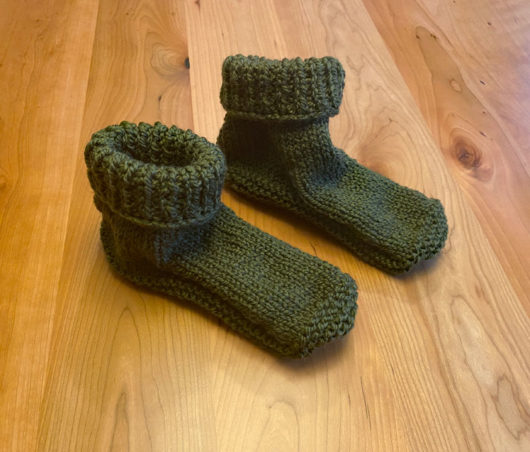 I knit mine using size 10 US needles and they fit a size 10-11 manfoot. Be sure to bind off loosely on the cuff so you don’t cut off a fellow’s circulation! 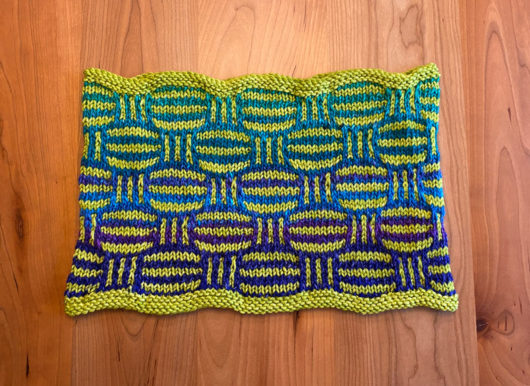 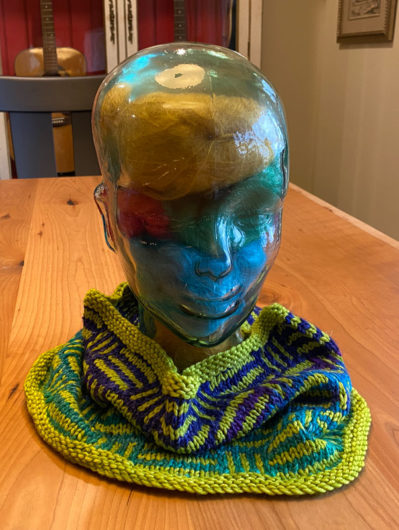 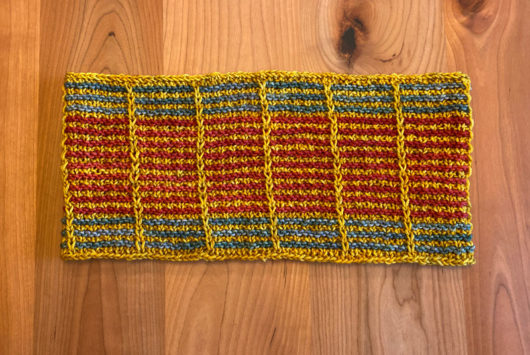 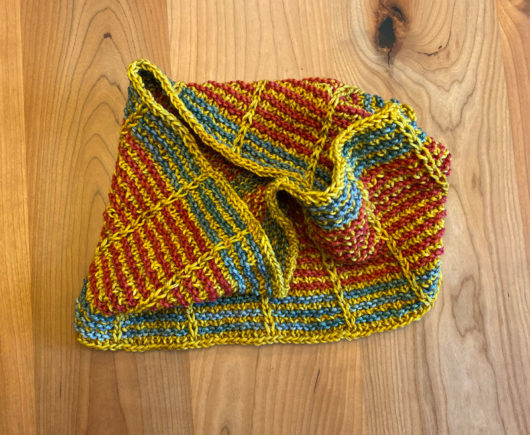 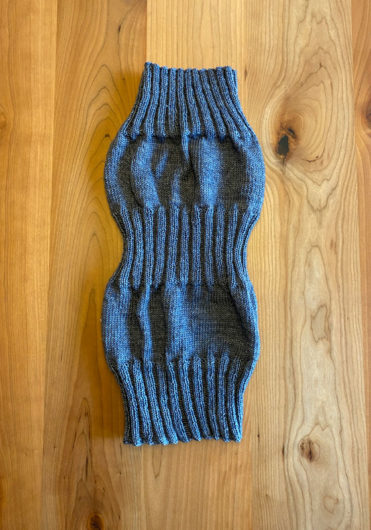 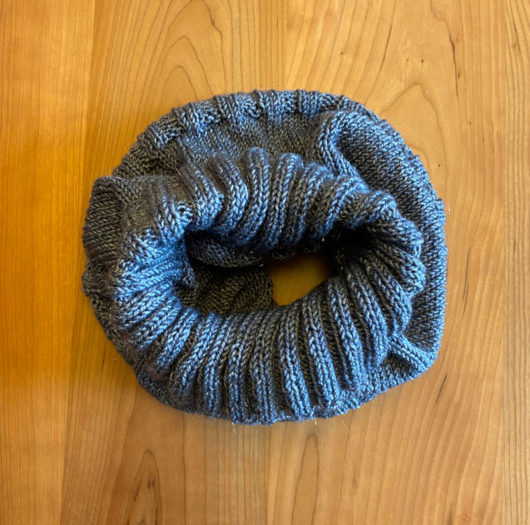 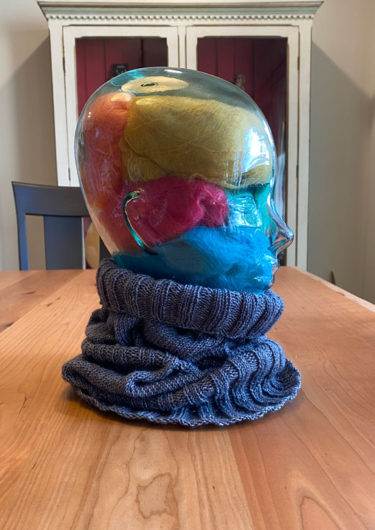