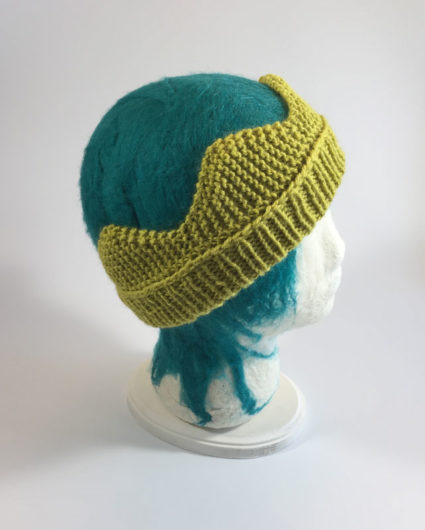 I have a habit of often measuring the success of a pattern by its crown decreases. No problem here!

65 yards of worsted weight is enough to crown even a pumpkin-head. I used Plymouth Encore. The knitting is quick and fun. This is Linda Kilgore’s Crown Ear Warmer. The pattern is an almost-freebie (one buck). It makes for cute headgear on the birthday kid and would also be a great party-favor. Plus, it is double thick over the ears and will keep ears warm and cozy. 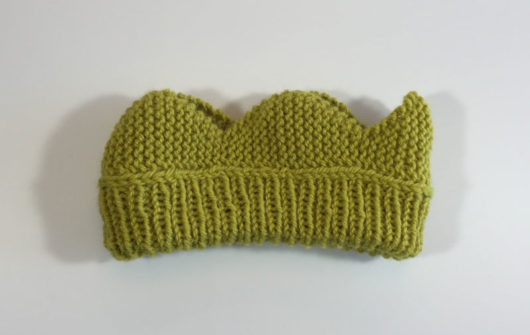 A headband doesn’t get any easier than this next one. Garter stitch with knitted-on I-cord edging. This is Carol A. Anderson’s Child’s Garter Stitch Headband from her #R-19 booklet “More Projects for the Community & Family.” Leave it to Anderson to come up with a no-nonsense name for her booklet and pattern. I am 100% comfortable with that choice. I’d just laugh myself silly if this headband were named something goofy. 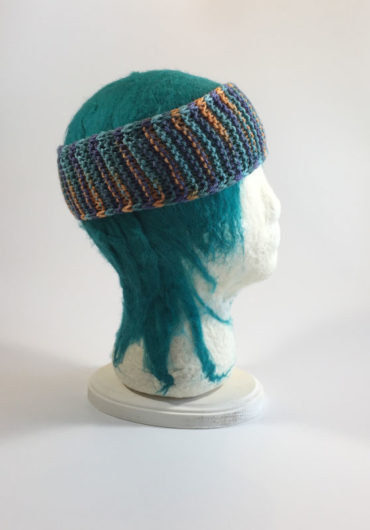 The pattern is ridiculously and soothingly easy. 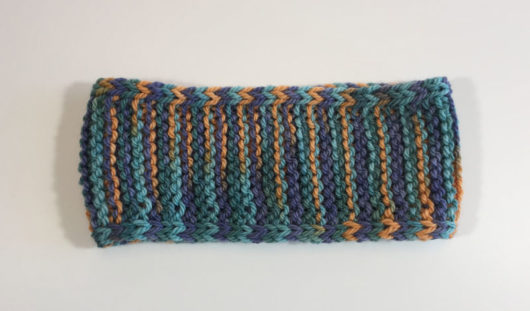 This next headband is a tad more difficult but well within the skill level of any but a total beginner. This is one of two patterns included in Knitwise Design’s Rugged Trails Headbands. I knit mine in Berroco UltraWool. Actually, it’s “Ultra” with a trademark symbol tucked in between Ultra and Wool. Really Berroco? You’ve trademarked “Ultra?”  OK. 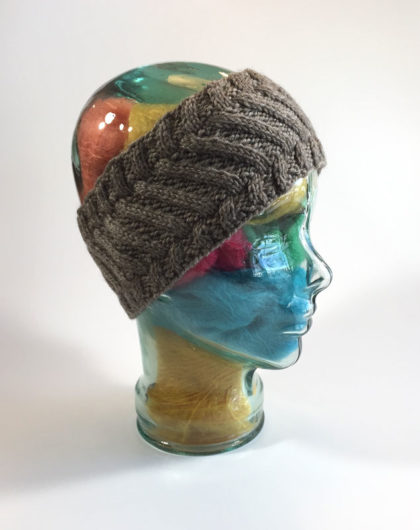 Headbands can be such useful teeny things. Keep one in a jacket or coat pocket and you’ll banish even the surprise cases of cold ears. 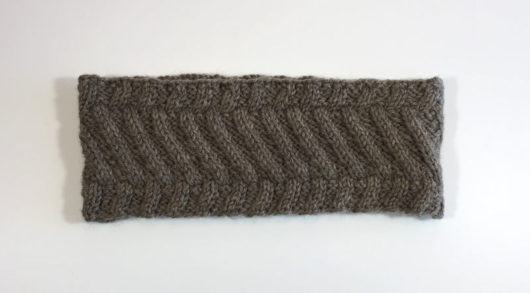 Just to come full circle, here’s my Ravatar wearing the Crown Ear Warmer. The thing is so stretchy that it fits tons of head sizes. Ravatar’s head is preemie sized and the headband still works well. Sort of silly though, because although I gave her eyes, nose, and a mouth, I forgot to give her ears. 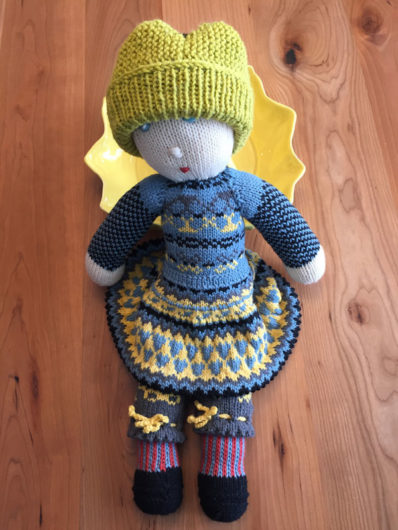 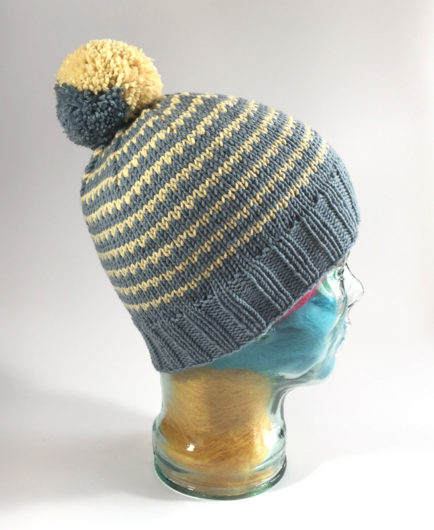 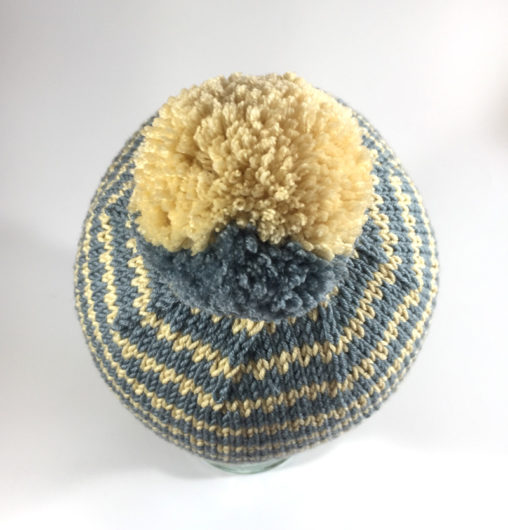 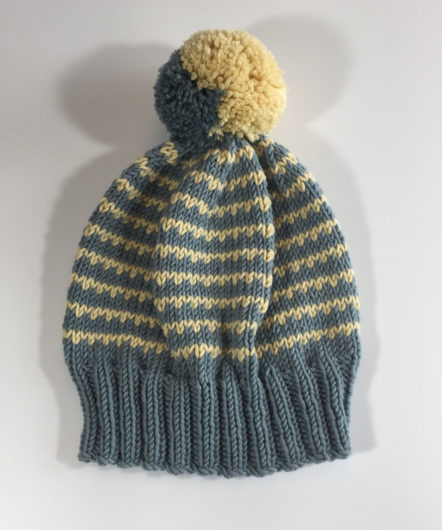 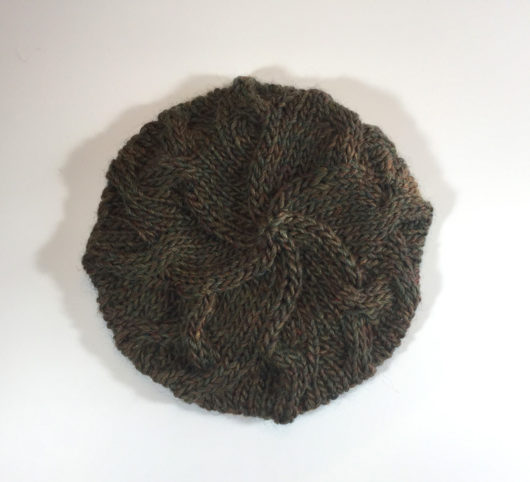 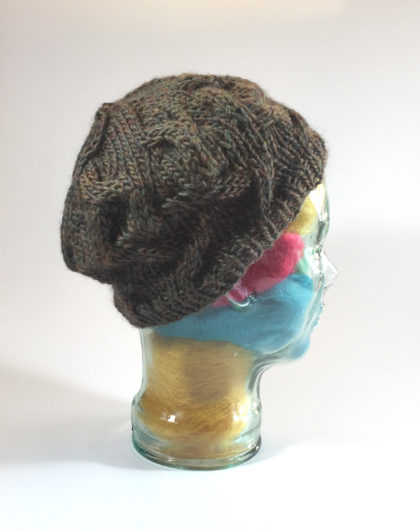 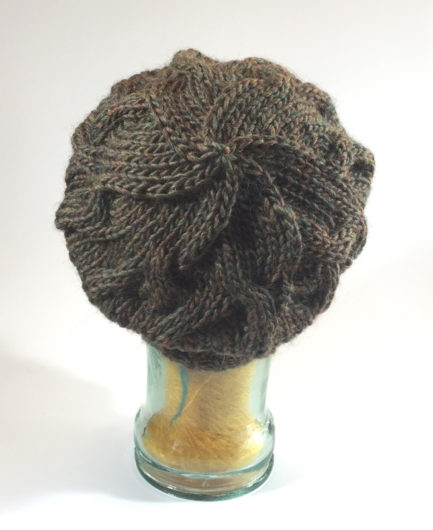 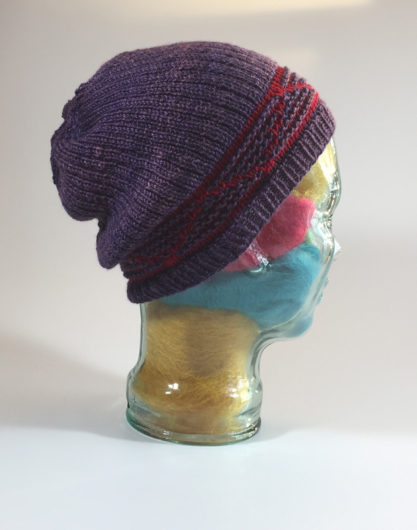 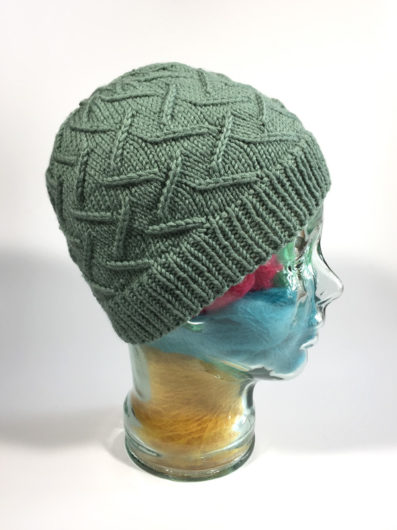 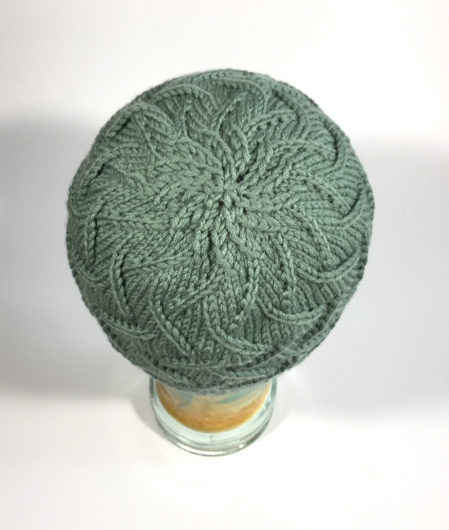 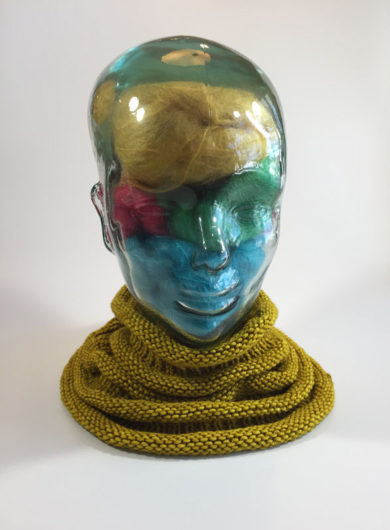 This is the Verna Glass Copycat Cowl. It’s a freebie on Ravelry that echoes a very popular mass-produced hat, the CC Beanie.  Probably, in the mass-produced hat, the “CC” didn’t refer to “copycat.” But who knows how far back these copies go? Anyway, the CC Beanie has  been copied and refined in a number of hand-knit hats, including Jaye and Central Ave. And now Glass has added an interesting cowl to the mix.

On the neck, the Copycat tumbles in well-behaved purl ridges. This one is knit in Malabrigo Rios, an excellent draping worsted. Here’s the cowl laying flat. 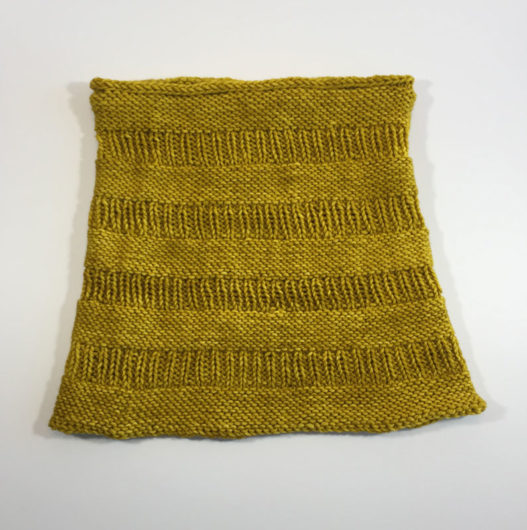 The colorway is a big favorite of mine: Frank Ochre.

Since copycatting was fully out in the open, I decided to borrow some of Aimee Alexander’s refinements from her Central Ave hat in my blue version, knit in Stonehedge Fiber’s Shepherd’s Superwash.

I worked twisted rib instead of plain K1, P1. So, that means I knitted in the back of each knit stitch in the ribbing sections. And I knit 1 round after each of the increase knit rounds in the pattern. And instead of 1 round knit after the purl rounds, I knit 2 rounds. I was trying to give more definition to the ribbing and to set off the purl ridges a bit. The purl rolls are still distorted some from the tug of the increases even though I added an extra round of knit, but I believe the extra round (and a light steaming) helped tame that.

Finally, my lightweight superwash worsted wasn’t holding up well to 7 rounds of purl, so I purled only 6. And, in the final set of purl rounds, I purled 7 rounds instead of 8. 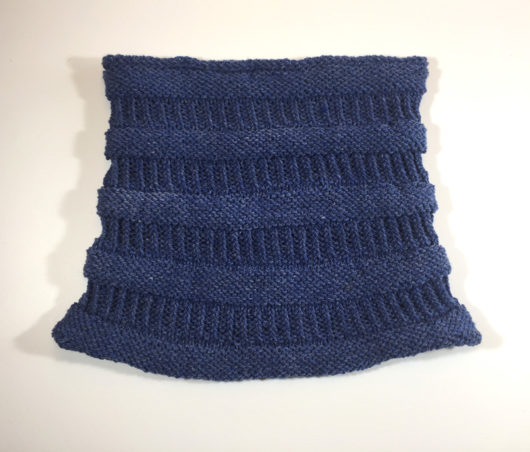 The twisted rib stiffened the fabric some and made the purl ridges more pronounced. I like the look. But I’d probably knit the Glass version if I knit this again. The fact that so many folks are working with versions of this motif made me feel more free to experiment. 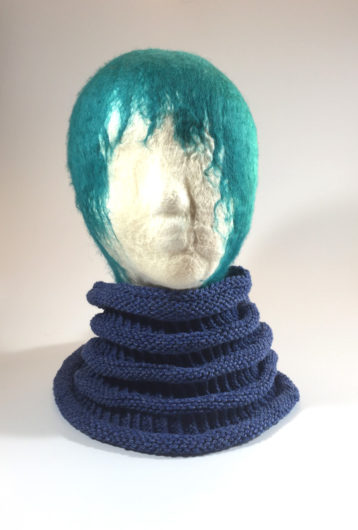 When it comes to textured cowls, the DK weight Chinle Cowl by Stephannie Tallent is a huge favorite of mine. There are only 12 projects posted on Ravelry for this cowl. And five of the projects are mine. This will be the first one I’m keeping for me. I see it as a pattern that definitely deserves more attention than it seems to be getting. I made my first one in the fall of 2014. $6.00 for the pattern, amortized over my five knits, is $1.20 per knit. I think I should probably make the math even easier and knit another one. 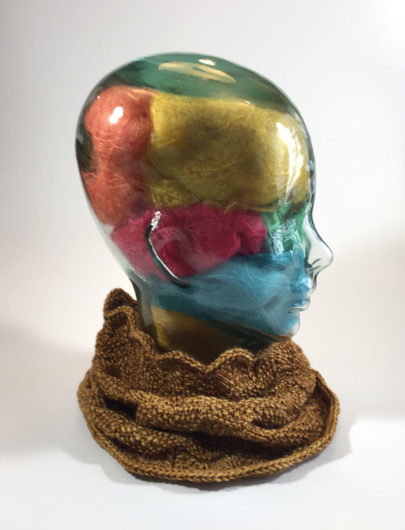 I knit mine in Anzula Cricket, a next-to-the-skin soft DK in 80% merino, 10% cashmere, and 10% nylon. Cricket knits up with great stitch definition. The Chevron Welt  biases the fabric to encourage the seed stitch layers to ripple. Brilliant! 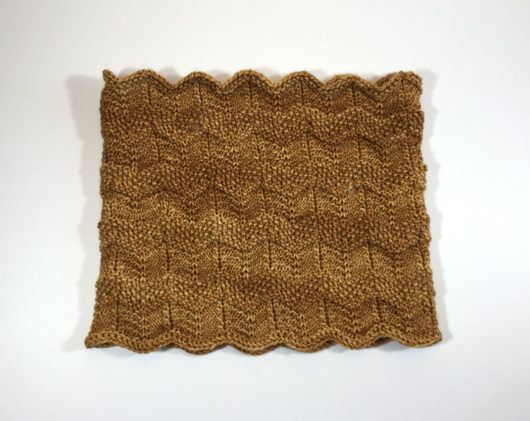 Jo-Ann Klim’s Araluen Cowl is another great textured cowl that I’m loving but, at least in terms of number of Ravelry projects, it isn’t being much supported yet by knitters. There are 10 projects on Ravelry and three of them are mine. This is my latest, in Malabrigo Rios in the Archangel colorway. 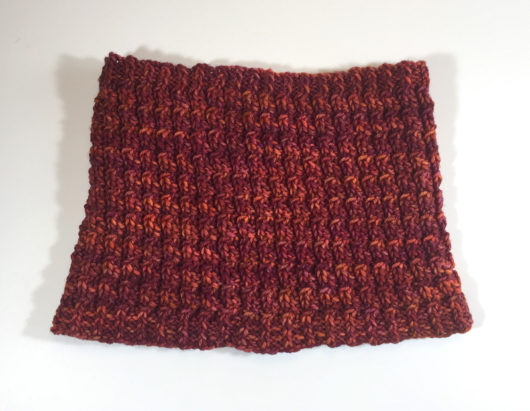 It’s a seriously excellent pattern that has what I see as a vintage, almost-crocheted look. And, including because I don’t know how to crochet, that’s appealing to me. 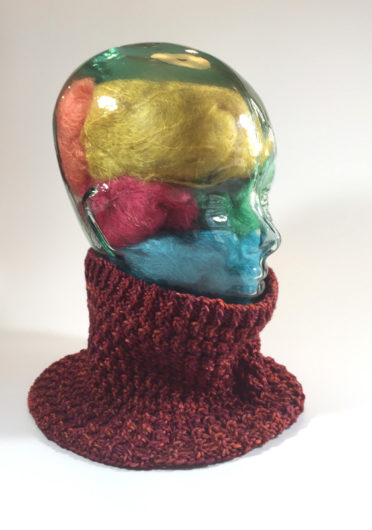 I’ve gotten a ton of use out of my cowls this winter and spring. It’s been rainy with temperatures in the mid-30’s lately so, sadly, I am still wearing my cowls (even indoors) where they feel so very cozy. Our kayaks are resting near the lakeshore and I hope that this weekend it will be warm enough to get out for a paddle. But yesterday? Yesterday I was indoors, knitting while wearing one of my cowls.