With another year of knitting drawing to a close, as in 2011 and 2010, here’s this year’s knitting retrospective. If a front and a back view of something seemed usefully illustrative, I’ve included it. Some of these projects have yet to be posted with full descriptions on the blog, so please stay tuned for the details. Click on the thumbnails for a better view. 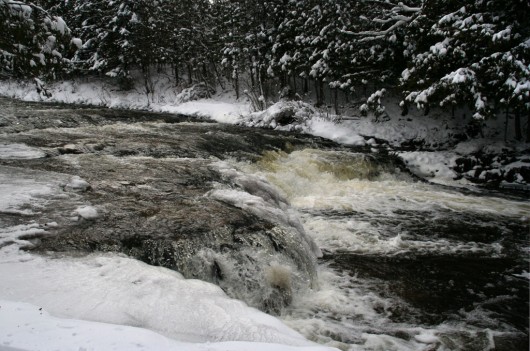 We have a dainty-sized gem very close to Long Lake: Ocqueoc Falls. The entrance is off M-68, between Onaway and Rogers City, not far from Millersberg. It’s actually the largest waterfall in the entire lower peninsula. OK. OK. My son says that Somerset Mall has a larger waterfall, but he’s enjoyed this spot so much more than any mall’s falls. In summer, the spot at the base of the falls is much more tame and very good swimmers can have a very good time. But this is winter.

On December 23rd, we trudged through about 10 inches of new snow, wishing we’d brought our snowshoes. It’s a short walk from the parking lot to the falls. There are pit toilets at the lot. I rate pit toilets on a hospitality scale and in winter most of their marks go way up. But, in addition to being clean and not smelling like you needed to hold your breath through the duration of your visit, the women’s toilet was: (a) unlocked, and (b) had toilet paper. So, that’s an A+. But I digress. It’s a short walk to the falls. In the winter you are spared noticing that the state of Michigan decided to spruce up the path a few years ago and you don’t have to be distracted by the fact that you’re on a man-made walkway. The changes did make the park ADA compliant, though–so that’s a big plus.

No one was here but us. It looked like one person, and several deer, had walked through the snow before us.

Pure Michigan. For real. Here’s a taste of the sounds of the falls: 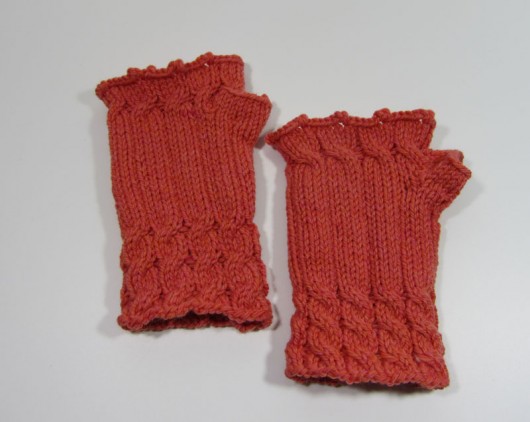 This is Cheryl Niamath’s Fetching, a free fingerless mitten pattern available from a 2006 issue of Knitty. 19,395 Ravelers have knitted this pattern and posted it on their Ravelry project pages. Nearly another 6,500 knitters have the pattern saved in their queues, planning to knit it in the future.

These are two of mine, knit here in Michigan’s Stonehedge Fibers Shepard’s Wool, a super-soft merino. Shepard’s Wool is a lightweight worsted that works up great in this pattern. These two are part of my holiday gift basket. “Free to good home” if you stop by my place over the holidays. In fact, the apricot pair has already been “adopted.”

And, as for the holidays, best wishes for yours! 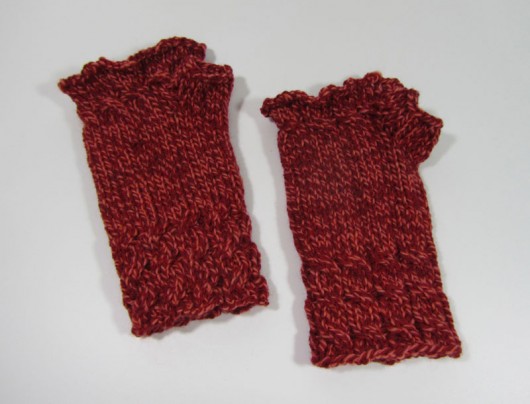 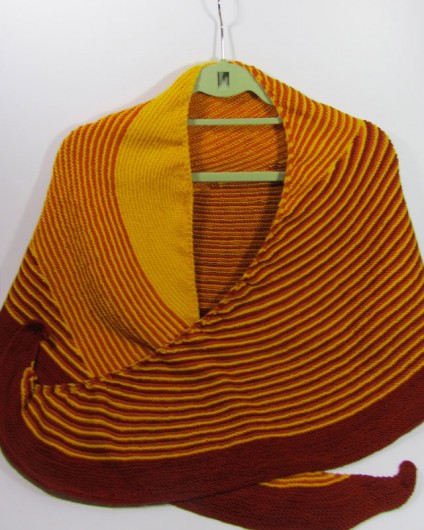 This is my first time knitting with Wollmeise, a yarn so sought after in the United States that knitters watch Twitter feeds for its availability and buy grab bags without even knowing what exactly they are buying. And, it is also my first Color Affection, a crescent-shaped, wildly popular shawl by Veera Valamaki, of Rain Knitwear Designs. More than 6100 Color Affections are posted on Ravelry and it’s currently in nearly 8200 knitters’ queues, awaiting casting on. So, two firsts and the opportunity for two reviews.

This is how my Color Affection started out: 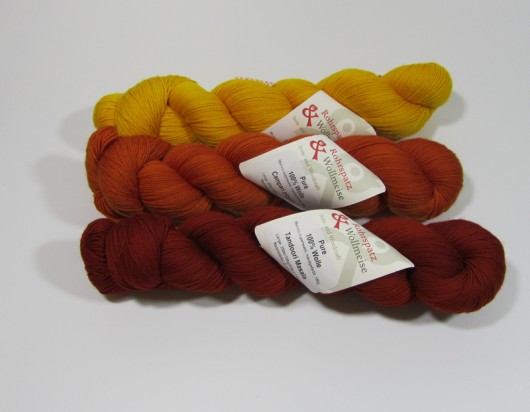 I’ve always been a willing “but the emperor wears no clothes” kind of person, hopefully only if the situation warrants. The color saturation is what everyone loves about Wollmeise and on that score I’m a huge fan. These colors grab hold of your eyeballs and won’t let go. And the garter stitch fabric produced on my size 4 needles has a great feel to it. Bouncy, as is always true of garter stitch. Wooly but not a bit scratchy. But knitting with this stuff was not really wonderful. I found the yarn to be quite splitty. That tendency was reined in some when I ditched my old Addi circular and bought a new Addi lace point circular. But I still had to knit with a lot more care and attention than I usually devote to mass quantities of garter stitch.

I decided to make a few modifications to the Color Affection pattern. I couldn’t get anywhere near the 18 stitches to 4 inches that is the gauge for fingering weight with this yarn and not have it go all loosey goosey on me. So, I decided to follow the lace weight instructions instead and aimed for 22 stitches to 4 inches. I didn’t like that either. On size 4’s my gauge was 26 stitches to 4 inches and that’s what I went with. Valamaki says that gauge doesn’t matter much, except in terms of running out of yarn, and I was confident I had lots to spare with these huge Wollmeise skeins.

I followed the instructions and used raised bar “make 1’s” rather than the knit in the front and the back and yarn over combinations a lot of Ravelers have used instead. They are trying to avoid the tightness that results from an edge constructed of “make 1” increases. An admirable goal. My edges were very tight. They relaxed with steam and almost blocked out.

In the last large section of the shawl you are carrying 3 yarns along the edge and that brings up the question of how you will treat those carries. Valamaki recommends just twisting the 3 yarns together every other row. I decided that was likely to look rather sloppy, a conclusion I was helped to reach by looking at some close ups of projects on Ravelry. So, instead, I knitted the first stitch of every other row with all three yarns. I’ve never done that before and wouldn’t recommend it except with a fingering or laceweight yarn.  But it worked out well.

Since my gauge was puny by comparison with the pattern, I knew I would have to do something to gain depth to the shawl. I worked all the short rows one stitch less (3 instead of 4) and then repeated the sequence of 12-short row sets a few extra times, for a total of 13 sets of repeats.

I thought I’d likely have to wet block my Color Affection, but my trusty Jiffy steamer did the job, well, in a jiffy.

And now, a few more views (click to enlarge): 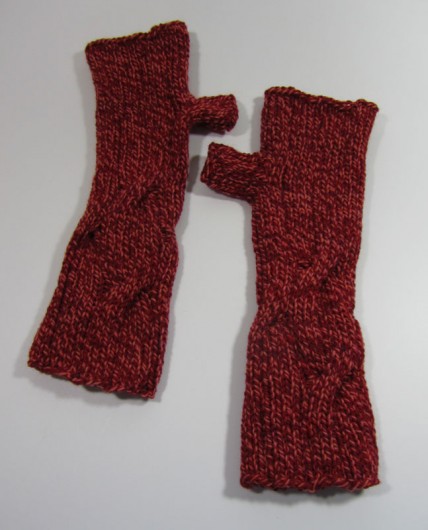 This is Dashing, a free Knitty pattern designed by Cheryl Niamath. I’ve knit it before and more than 5000 Ravelers have too and have posted photos of their finished work.On the wrist, the cables twist in opposite directions. A quick knit and a great last minute holiday present.

Dashing is shown above in Stonehedge Fibers Shephard’s wool worsted in the Cherries Jubilee colorway. The only modification I made this time was to shorten the main section by ten rounds. After knitting another pair of fingerless mitts out of the same skein, I knew I wouldn’t have enough to complete Dashing at the full length.

I also knit up a pair in Shepard’s wool worsted in Milk Chocolate. These are the full length. Both pair will be in my knitted goodies basket for family members to choose from over the holidays. Those who wear hats will find hats. Those who like mitts, will find mitts. And those sturdy utilitarians who only like knitted washcloths will find some of those also. 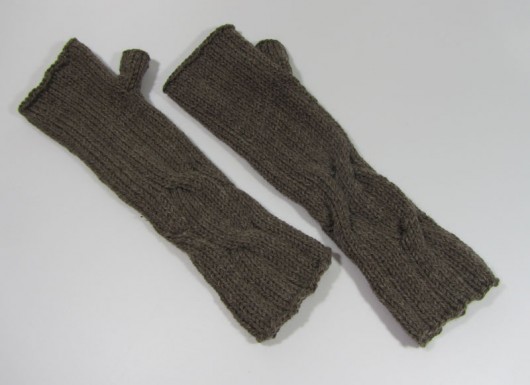