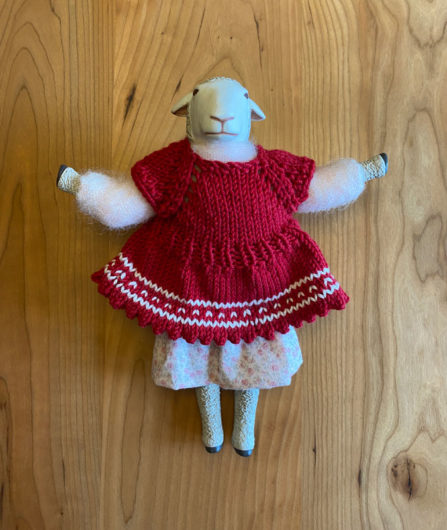 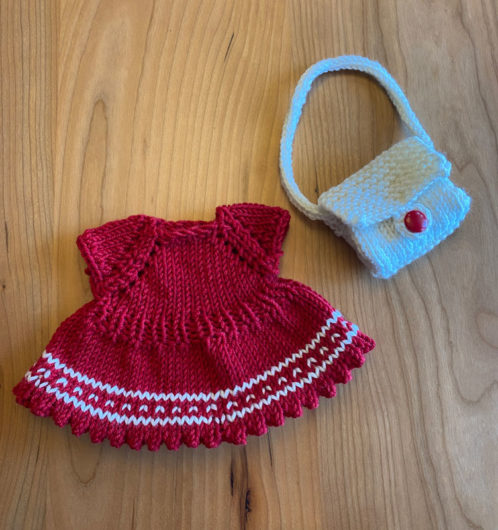 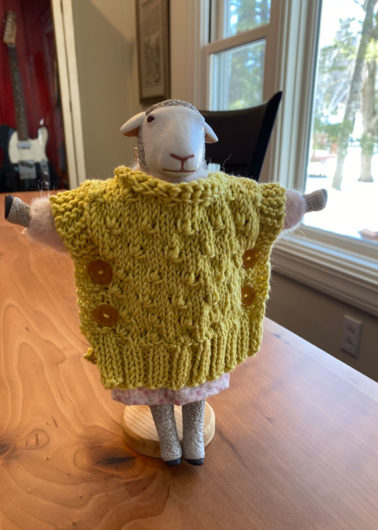 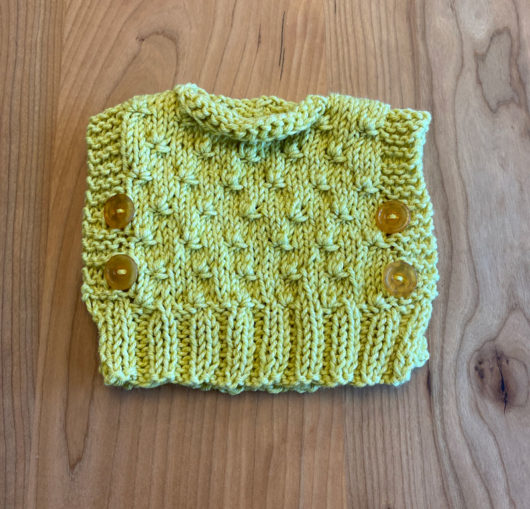 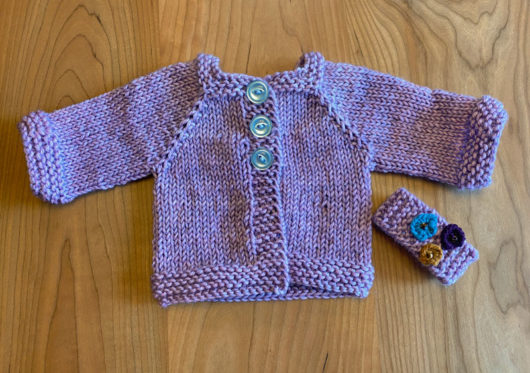 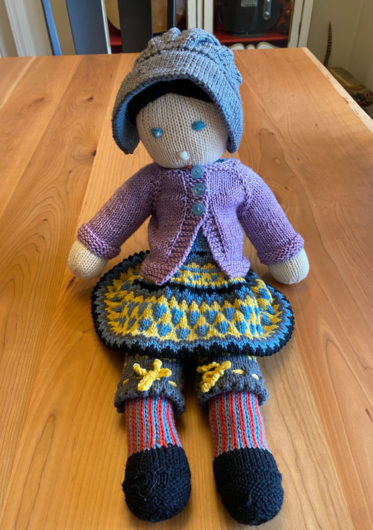 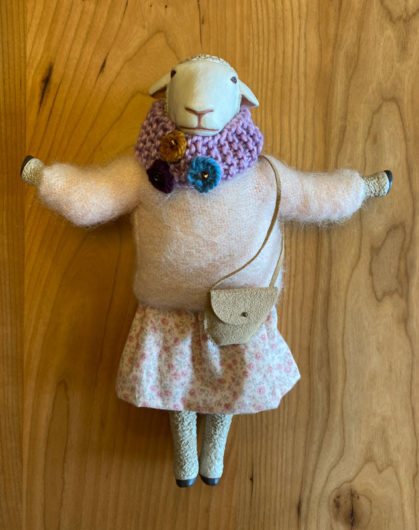 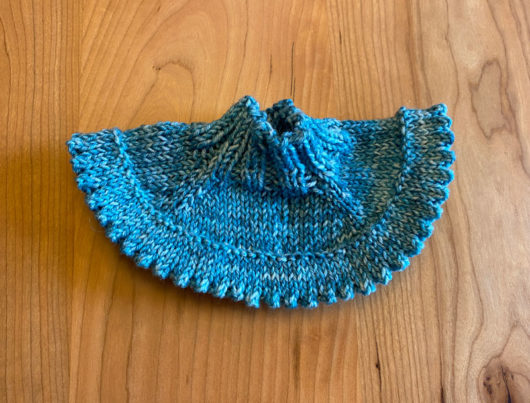 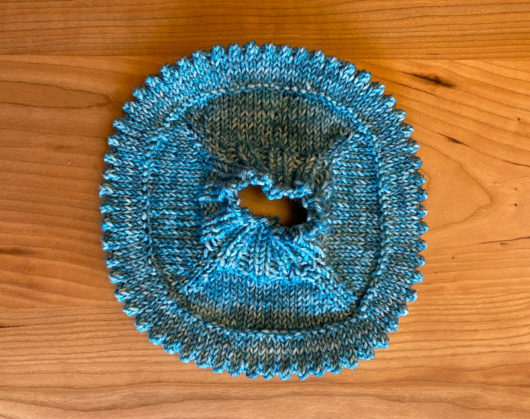 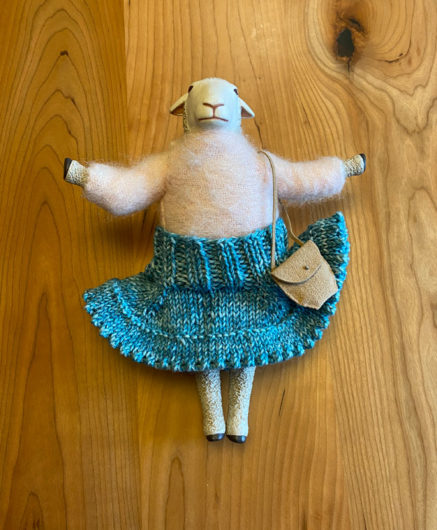 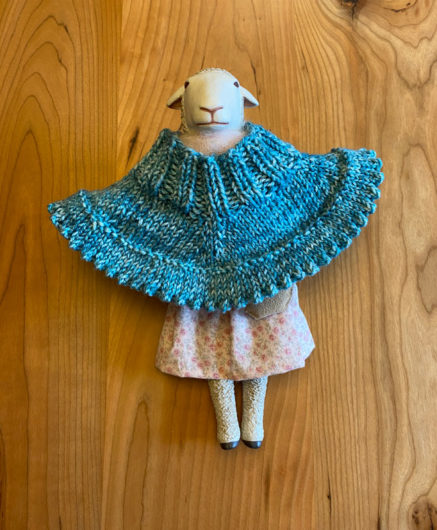 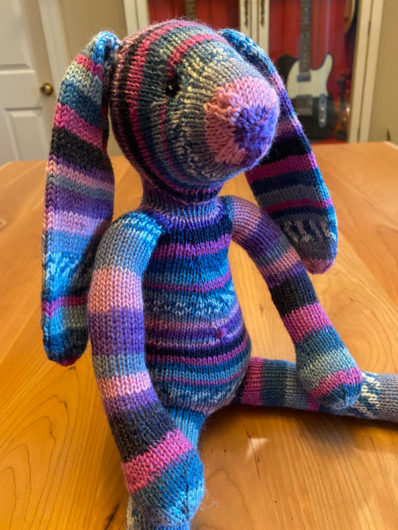 Once upon a time, three balls of Adrialfil Knitcol, a DK weight yarn, were sitting in a yarn shop. They were in a bin, on a wall of bins, surrounded by their brother Knitcols. They were a diverse bunch of what their maker calls “user friendly jacquard.” There were rainbow balls, pastel balls, autumnal shaded balls. All sorts of balls that, once knit, would clearly be seriously wonderful.

To get to their bin, a visitor first enters at the bakery door. You read right. The bakery door. There are many many non-yarn distractions to be resisted. Breads. Doughnuts. Ice Cream. Cookies. Not just any old cookies either. Coconut macaroons dipped in chocolate. Ginger cookies with raspberry filling. Dare I repeat? Ginger cookies with raspberry filling. Sigh.

After the bakery, comes the little restaurant. It will feed you great soup. Excellent sandwiches. Good coffee. They won’t even mind if you sit down and just eat a ginger cookie with raspberry filling. Or two.

Go to the end of the restaurant counter. One step up. Jog to the right. And the Dutch Oven Bakery turns into the Dutch Oven Yarn Shop. For more than 40 years this unlikely combo has worked well.

Oh. Here’s a sample of those Knitcols I was writing about before I got distracted with thoughts of ginger cookies with raspberry filling. 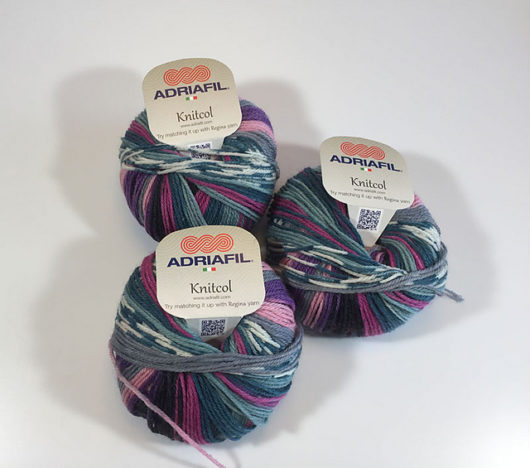 These three balls traveled home with me. There’s even a little raspberry color in the balls.

The balls probably pined for their brothers. Maybe they pined more for the wonderful non-sheepy smells that wafted into the yarn shop from the bakery and restaurant. Maybe they missed hearing June say “hello, can I help you?” Instead of a nice airy bin, they were confined in a moth-attack-proof blue plastic-covered bin. Instead of other friendly Knitcols, they rubbed elbows with other DK weight yarns, including a few snooty ones like Brooklyn Tweed Arbor and HiKoo Sueno. Especially the Arbor groused about having to share space with the ready-to-use Knitcol balls. I told the Arbor to pipe down and reminded them that I bought them from the sale basket and I’d paid full price for Knitcol. The Arbor and Sueno created enough of a racket that I knitted most of them into hats and doll clothes. I told the Knitcols they must be patient and I’d get to them when a project worthy of their specialness presented.

And then came Annita Wilschutt’s Bunny Named Quwi. The lead photo on this post shows off his cute face, long ears, belly button, and how well Knitcol works in this pattern.

Quwi is about 20 inches from head to toe. 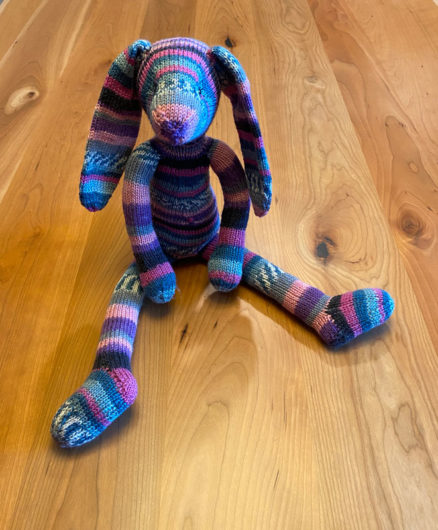 I just let the yarn do the work.

Here’s Quwi from the back, showing off his butt and bunny tail. 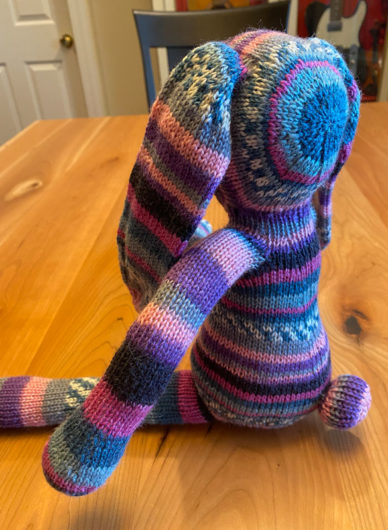 Here’s Quwi flopped over, resting, hiding under his ears. As with all bunnies, Quwi believes that if he can’t see you that means you can’t see him. 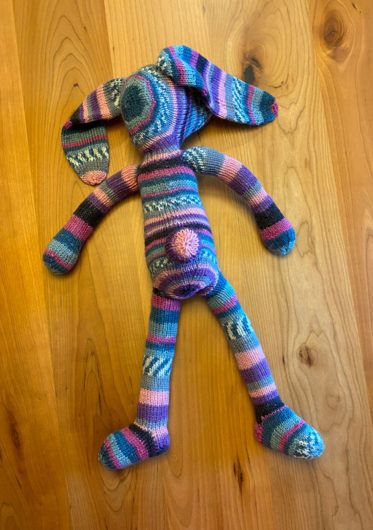 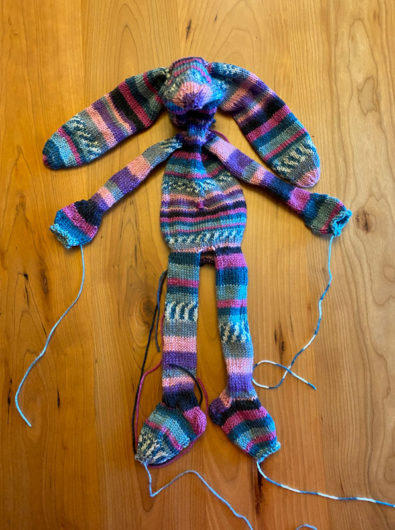 Quwi begged me not to post the photo of him skinned with no insides. I told him to buck up because you might like to see how he was constructed and how there was no sewing at all. Each piece of Quwi is knitted on as you work, from head to toe.

Quwi, apparently in a pensive mood. 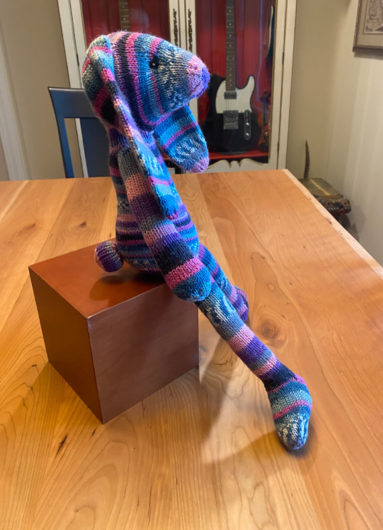 Maybe I should have been more sensitive to Quwi’s feelings about that last photo. It’s been quite a journey from those balls in a bin to what he is today. 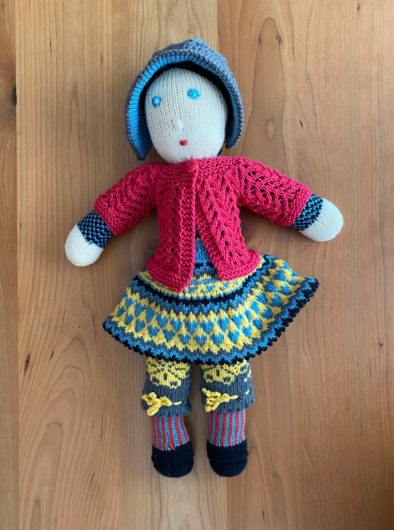 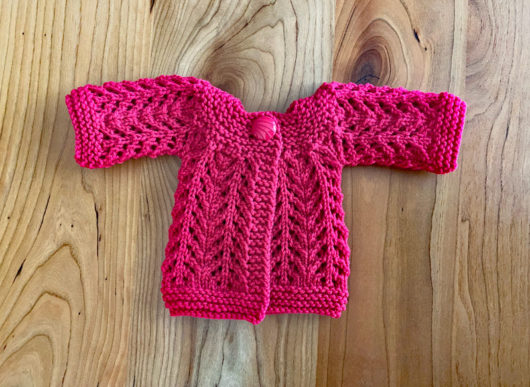 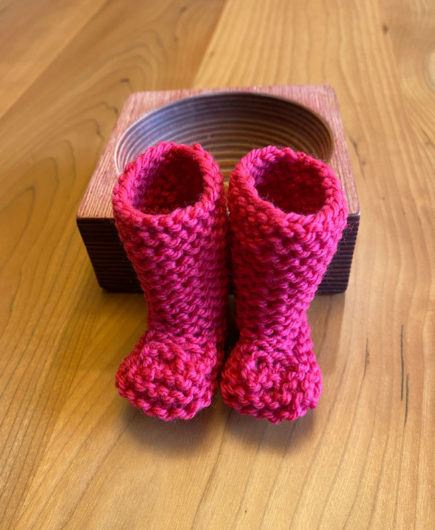 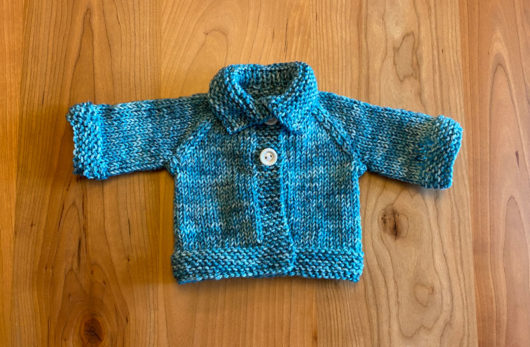 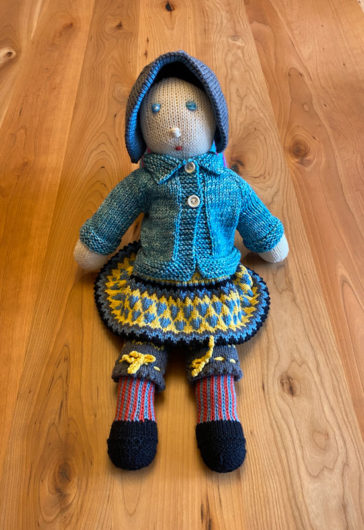 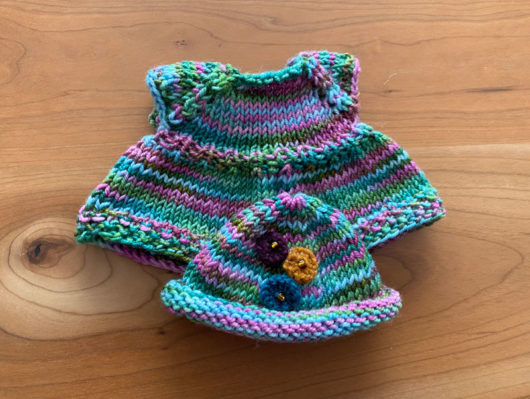 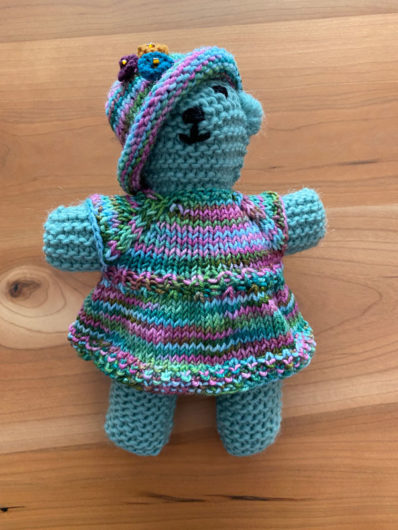 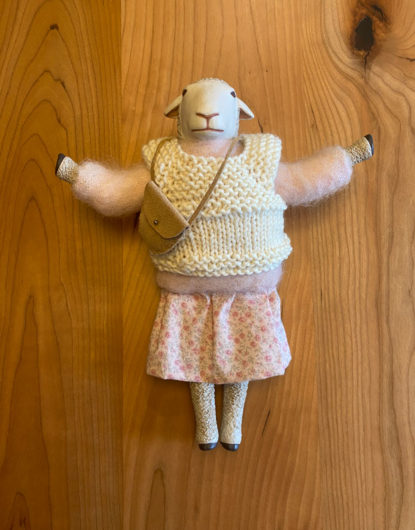 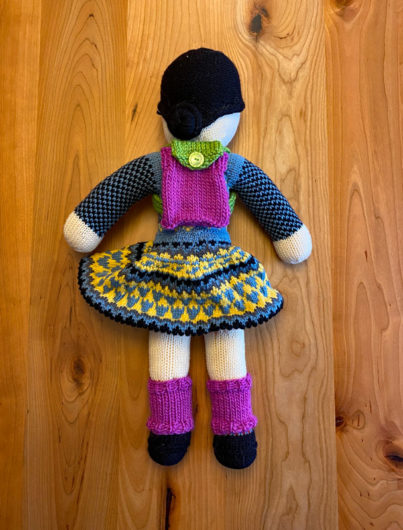 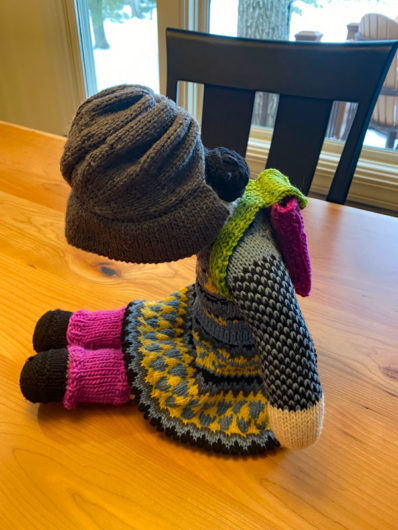