To my way of thinking, neither of these cowls look right laid out flat. The first is Delicious Yarns’ Layer Cake Cowl. And the second is Amelia Lyons’ Willow Cowl. 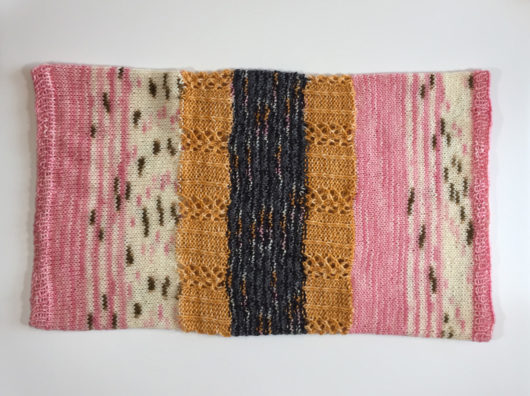 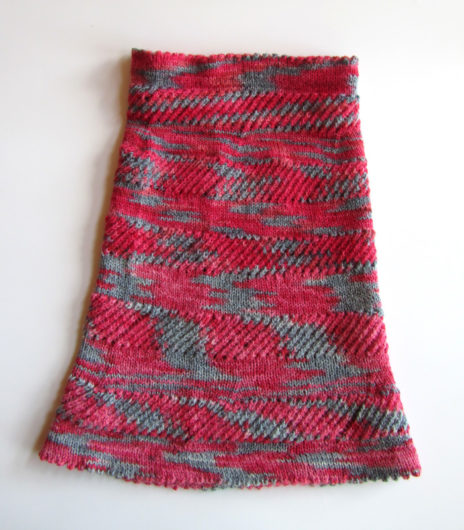 But, my goodness, worn round the neck they are quite delightful. BlueHairFeltedHead and GlassHead have been competing for wearing rights to Layer Cake. 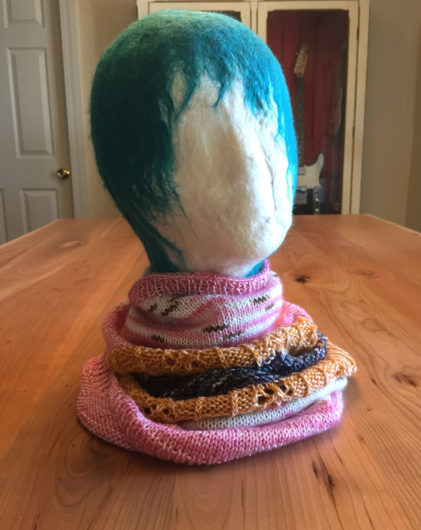 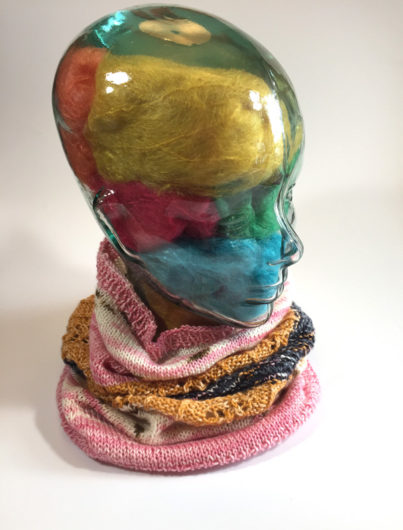 I might just get selfish on this one, though, and keep it for me. And, speaking of me, I wrestled Willow Cowl away from both my heads and decided to model it using my own. 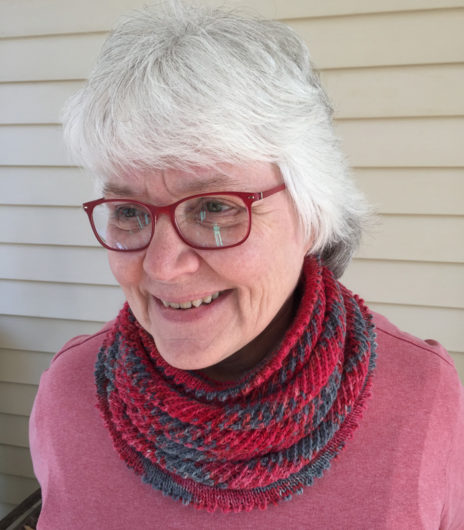 These cowls, which look so odd laid out flat, are completely tamed by necks. Willow Cowl naturally stacks into well-behaved rolls. And Layer Cake drapes into soft folds. 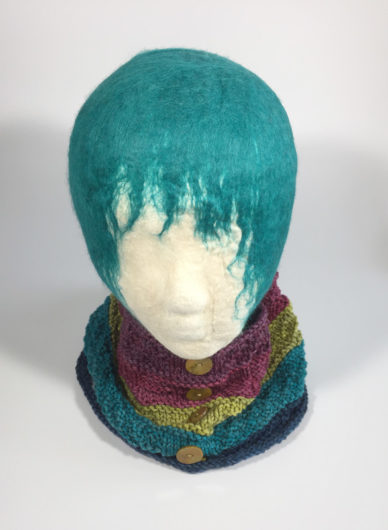 Isn’t BlueHairFelted head pretty? (GlassHead is jealous that her competitor gets top billing today). Blue Hair is wearing Rainbow Road, by Jenna Krupar. Mine was knit from a kit that contained 5 mini-skeins of Frabjous Fibers’ March Hare, an Aran weight. March Hare is a 100% merino. It’s next-to-the-skin soft.

Here’s a closer look. It’s actually a sampler cowl, worked in simple knits and purls patterning. Especially in Aran weight, you’re finished so quickly there’s no time to be bored. 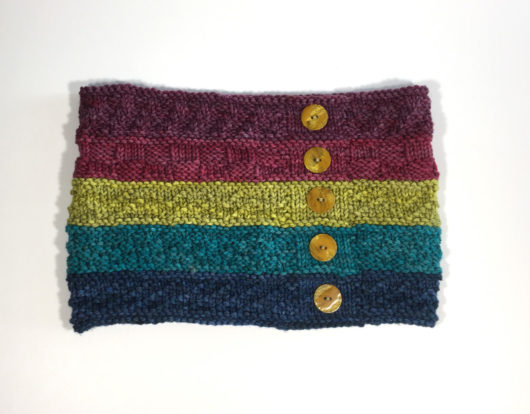 That’s a fake button band. Normally I’d just continue the patterns over the stitches of a fake button band. But, I saw this cowl knitted up at a local shop and decided it worked well. I chose very thin, lightweight buttons. They won’t weigh the cowl down.

I decided to keep this one for me. So, nieces, this one won’t be in the holiday choose-your-gifts extravaknitza.

This one is for me too. 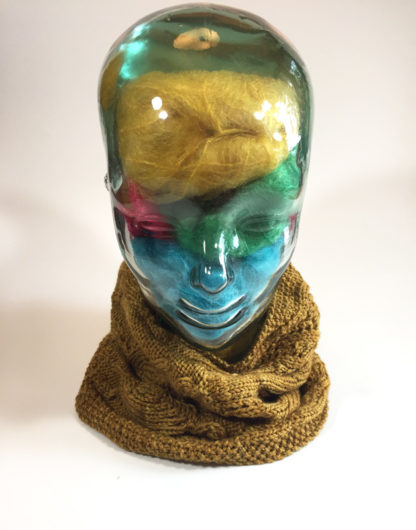 GlassHead has modeled this twice before for you. It’s Heather Anderson’s Turtles’ Journey Cowl. I knit this new one in Michigan’s-own Yarn Hollow Tango, an 85% wool,15% silk DK weight.

The way GlassHead is wearing it, it’s a little hard to see the story. These photos show the turtles’ journey through the dangers of the sand into the relative safety of the water. 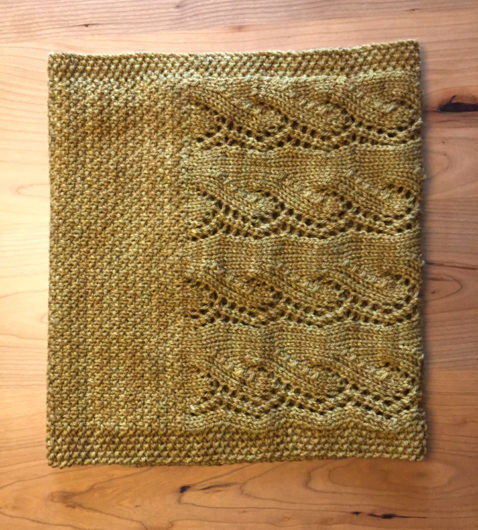 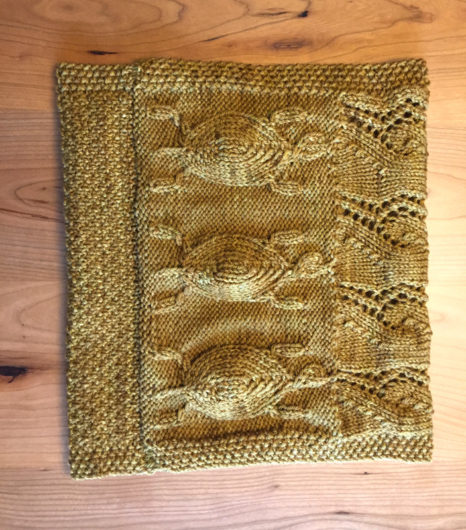 Knitting the sand, well not too exciting. The waves are an easy lace pattern. And the turtles? Well the turtles are some of the most fun a knitter can have. Watching the bodies form is lots ‘o giggles. 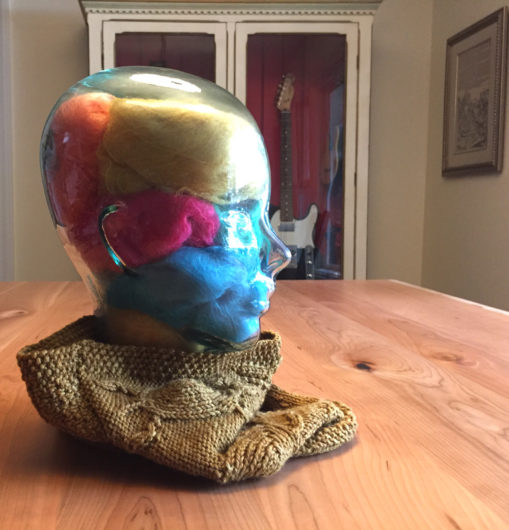 GlassHead gets a far-off, starry look in her eyes as she sits on my dining room table, staring out at Long Lake. I told her, no sea turtles here. But we’ve got snappers, painted turtles, and the occasional (OK, twice seen) Blandings turtles. She’s not getting the finer distinctions. 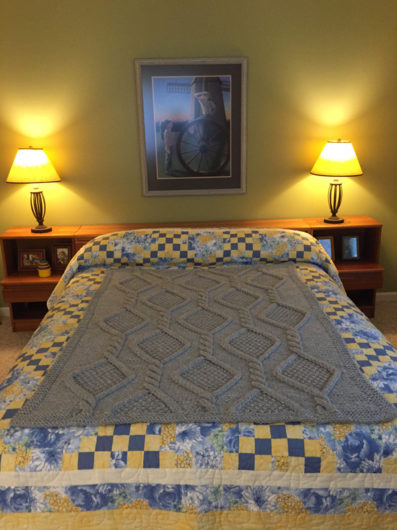 This is Kate Bostwick’s Ribbon Weed from her Fundy Tides Collection. I decided to substitute an easy care superbulky yarn, Plymouth Yarns Encore Mega, instead of the wool superbulky Bostick designed it in. My Ribbon Weed is actually a wedding gift Ribbon Weed and I decided that the young couple I made it for would welcome not having to deal with keeping a large, heavy, wool throw clean.

Here’s a closer look at the patterning. 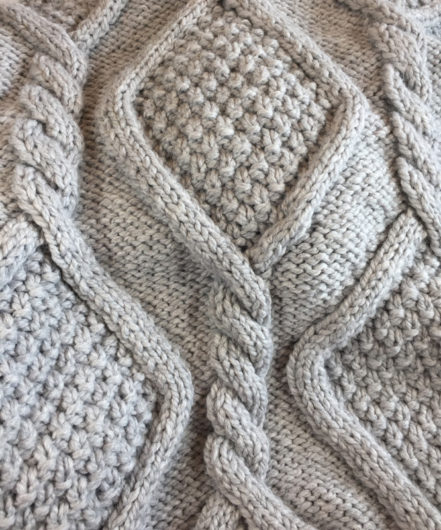 How perfect are these intertwining cables for two people starting down a path together?

I had some difficulties dealing with the many joins required. Encore is only 25% wool and that’s not enough for spit-splicing. I couldn’t hide the knots at the ends or under an edging since the garter stitch edge is knit as part of the overall pattern and because superbulky knots are, well, superbulky.  There were a lot of knots because the throw is knit on size 15 needles and these balls only contain 64 yards.

I ended up using the magic knot join technique. Magic Knot is a good knot for knitters to have in their tool chests. But, honestly for this application, except when I controlled placement by working into a “valley” section of the work, it’s still more visible than is ideal. That is a function of the superbulky yarn. Hopefully the knot will indeed be magical in the sense of it being absolutely firm. 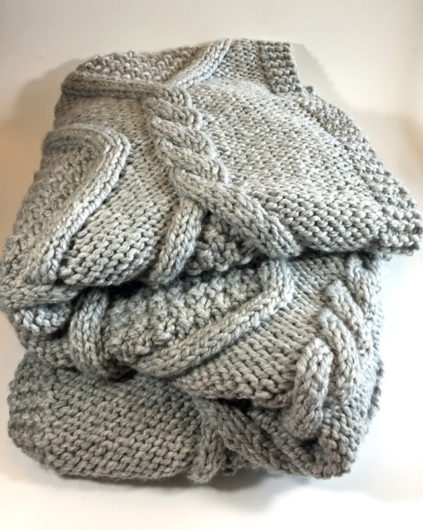 The bride and groom were both sincerely pleased with their gift. I sent it to their home ahead of the wedding. They both took time on their wedding weekend to thank me because “hand-made gifts are the best,” as the bride put it. 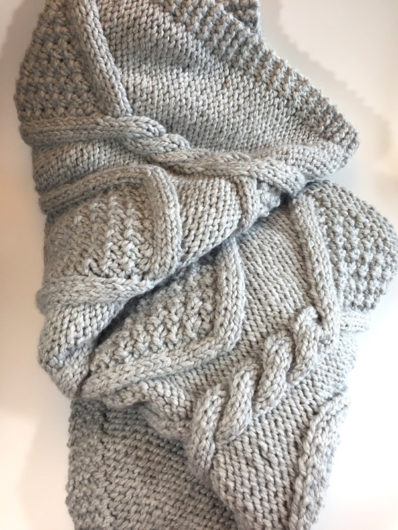 Ah, the joys of knitting for the knitworthy!