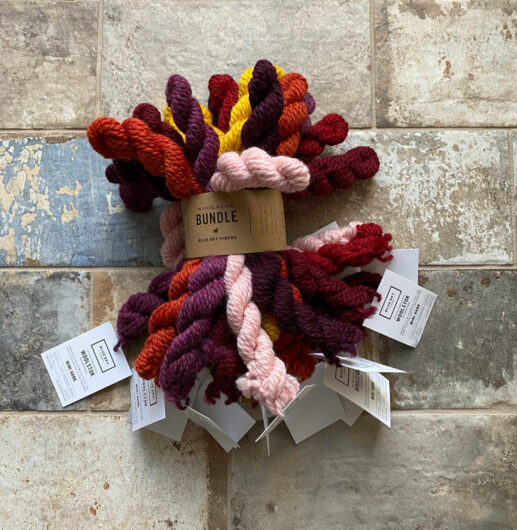 I probably shouldn’t admit this in such good company, but I never bought a mini-skein before though I’ve been tempted. The thought of winding all those cuties into something I could knit with was daunting. And anyway I’ve never been sure what I’d knit.

But this Blue Sky Woolstok worsted weight bundle was on sale at a wonderful online shop. And they recommended a cowl pattern to knit with my bundle. Well, or so I thought. I succumbed.

I read through the pattern and that’s when I saw that I was supposed to also buy a full skein of Blue Sky Woolstok at a dainty 123 yards but a not-so-dainty price. And the cowl was pretty tight on yardage for one skein so I really needed to buy two skeins to be safe. Now my sale price was feeling a little shaky. But in for a penny in for a pound. 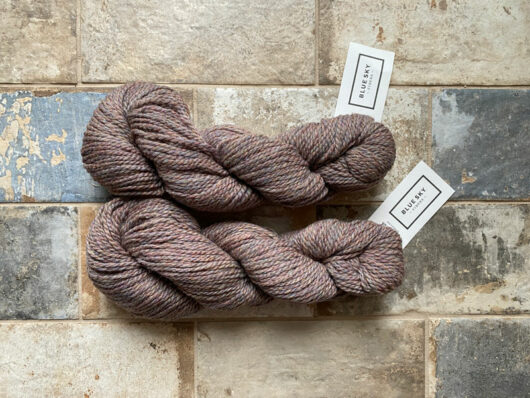 My first task was turning those bundles into balls or cakes I could knit from. There were two mini-skeins of each colorway. Curses. Double the trouble. How do knitters handle this? Because I tried everything and nothing was very satisfactory.

On my first few attempts I put a mini on my swift. My swift expanded to a cramped 12 inches or so and then I wound the minis into pitiful looking cakes using my winder. Geez, this is going to take longer than it will take to knit the cowl. Next, I opened up three minis and placed each one at a different height on my swift. If you think about how many hands a person has, you will see my predicament. Even when I pressed my mouth into service, loading that trio onto the swift was quite a task. Winding three minis in quick succession sort of worked to speed up the process. But no way was I going to keep that up.

My next try was to unroll the mini and hook the tiny skein around my two feet. I wound a ball using my feet to hold the tension. That worked fairly well until I got a little too enthusiastic and one foot slipped out. Finally? Finally I unwound a mini and laid all the yarn out on my bed. And then I just hand-wound a ball. That worked best. Whoever dreamed up minis should get a marketing prize and then a lump of coal for their birthday.

I dutifully charged into the recommended mosaic/slip stitch cowl. With my vast mosaic dishcloth experience, ahem, I figured I should be sure to match up high contrast colors. Oh my. I got halfway through the cowl and decided it looked like a 1960’s hippie monstrosity. It was probably that gold shade that was fouling the creation. My placement of the pink shade didn’t help.

Time to start over. What to do with these bundles, plus my 246 yards of Woolstok in the beautiful Northern Lights colorway?

Scrappy hats turned out to be just the ticket. 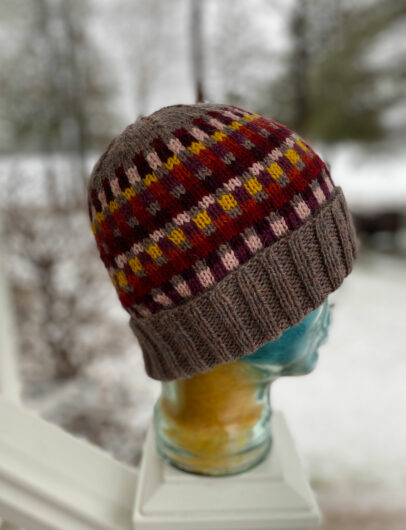 I am totally satisfied with Theresa Schabes A Fairly Scrappy Hat. It’s actually gathered quite a few Ravelry “favs” since I knit it back in late March when Hillman Michigan’s Long Lake was still a snowy place.

Seventy-six grams of yarn, lots of ends that I mostly wove in as the knitting progressed, and a well-behaved crown decreases. Great hat! 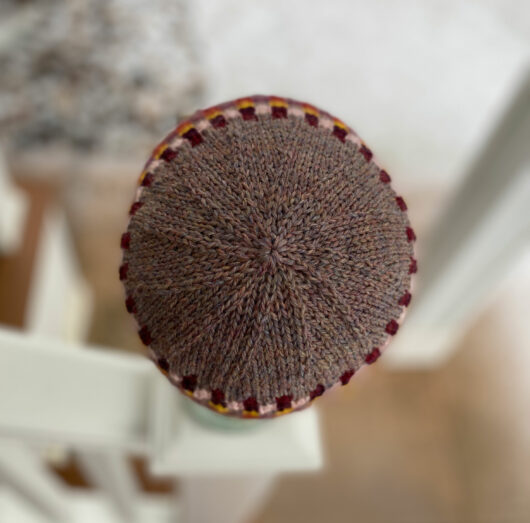 Next up was Justyna Lorkowska’s Scrappy Ski Hat. I’ve knit this freebie before in 2-color versions, here and here and here. And I know I shouldn’t insult Woolstok minis by calling them scraps. But gosh I like how treating them as scraps turned out. 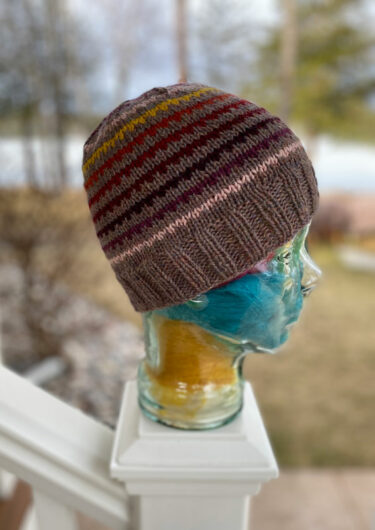 Excellent how the crown decreases work out when you continue the colorwork. 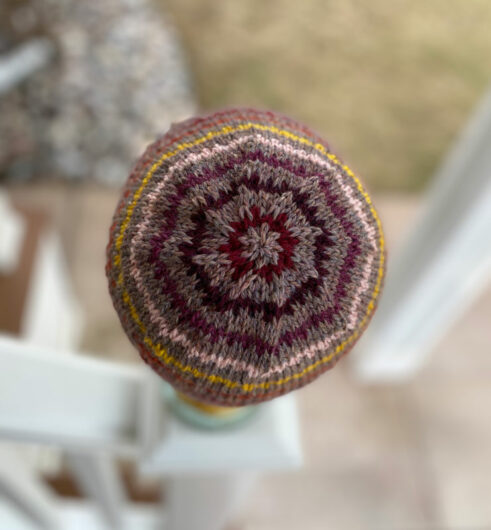 I still have about half a skein of the main color Woolstok and assorted oddments of minis. There’s likely enough for another hat!

The next “read the fine print lesson” is a little more nuanced. This is Rainbow Indigo Fisherman Beanie, a DK weight freebie designed by Janet Stimson. Obviously, my version is light on the rainbow. Actually, even the blue denim shaded original is merely aspirational on the rainbow. 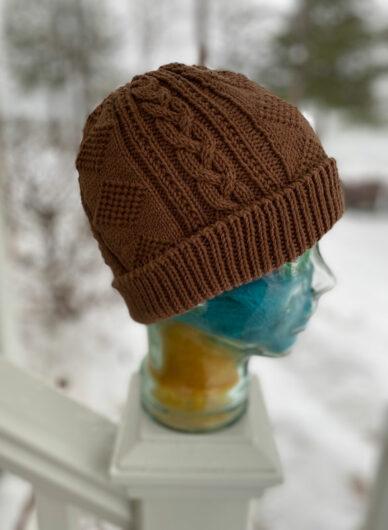 Such an excellent classic beanie. So, what does this have to do with reading the fine print? The pattern says a knitter will need 220 yards of DK weight to knit this hat. My two balls of Classic Elite Song totalled 220 yards. I’m good to go. Well, no. 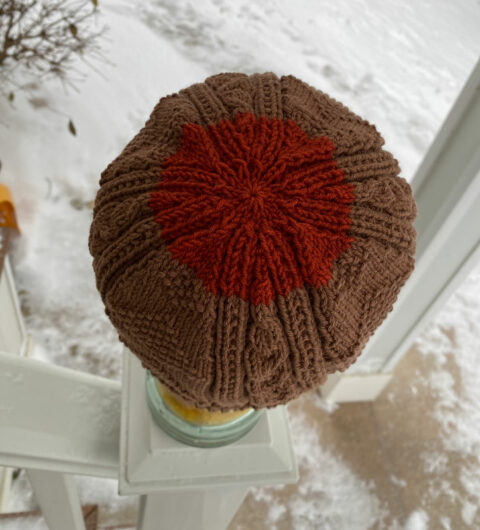 My completed hat, with its rusty red Classic Elite Song bullseye, weighs 98 grams. What happened? She-who-does-not-enjoy-being-called-out-in-public forgot to weigh the balls before starting out on the hat. That’s something that should be done whenever your yardage is as close as mine was to what the pattern called for. At least I had a bit more Song in my stash to complete my one-of-a-kind hat in the same yarn.

I will definitely knit Stimson’s pattern again sometime. Lesson learned on not trusting that a skein of yarn is going to contain at least the yardage the ballband indicates. 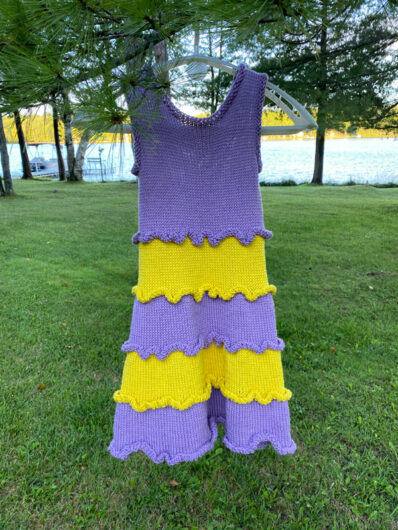 My granddaughter is a modern girl, about to turn 7. She plays with Legos. She would like to be a MineCraft gamer when she grows up. She watches football and roots for her home team. But she also likes her frills. She asked me to knit her another sundress to replace one that she outgrew.

This sundress is Jenny Snedeker’s Ruffled Sundress. I knit mine in Berroco Comfort. It’s a worsted weight, as I see it. 50% nylon, 50% acrylic. I wanted this dress to be easy-care—in the wash and then in the dryer. 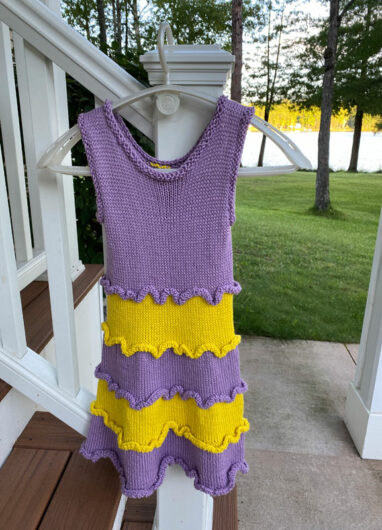 My granddaughter really likes her sundress. She’s worn it a lot. And it’s been washed and dried many times. Unfortunately, the purple colorway didn’t sustain its vibrancy. So, although Comfort is pretty good to knit with, I’ve learned a lesson here. 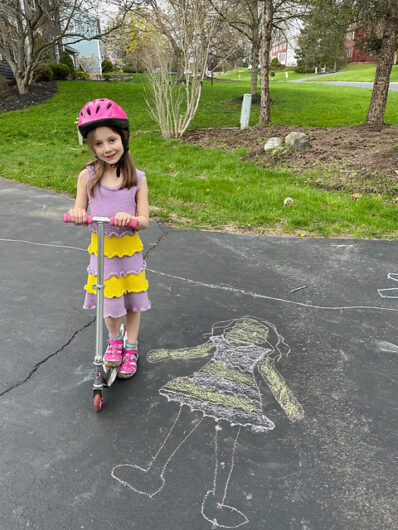 Next up is another knit upon request: “Grandma, can you knit me a new purse?” This one has really tickled my knitting fancy: Kristiina Temon’s spectacular (and free) Purse with Leaves. 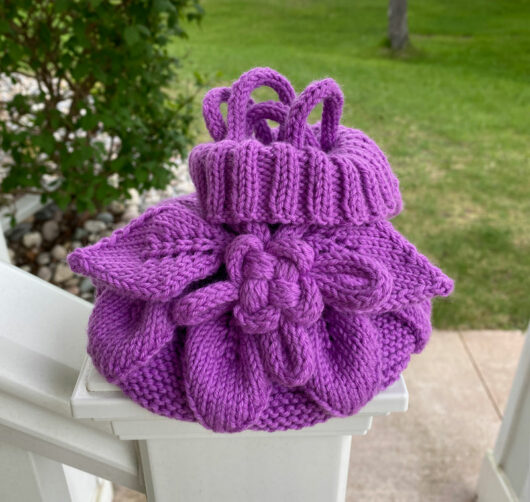 First off, though it’s a minor point, I love the name of the pattern. Nothing pretentious. Not “Ode to Spring,” just plain “Purse with Leaves.”

The directions for knitting the purse and leaves that frame that gorgeous Chinese Knot formed from I-Cord are spot on. OK, a few things at the final stage of the purse bear correction or clarification. Knit an extra knit round before you start the bottom decreases or the garter ridges will be funky. Decrease one stitch less each round of decrease. Use a provisional cast-on to start the I-Cord because you’ll be adding a leaf later and live stitches are useful for that. And make a 4 stitch I-Cord because that’s what you need to start the leaves. You’d have likely figured all that out pretty easily. That’s only a few corrections for a pattern that comes from a land far far away (from the United States).

That this is clearly not a pattern originally written in English isn’t a problem until you get to the very end and try to work with the knot and the I-Cord. And by that point you’re totally committed to making it work. But reading stuff like “superfluous has been dissolved after tying knots” and “That the knot had been turned out on that party where it is necessary, we look how the bag and a cord should lie at knot setting. This position a miscellaneous at performance of the first and second step” is a big distraction. And also a big hoot. But you’ll get the gist of it. I’m thinking that Google Translate or its human equivalent is the culprit here because, quite clearly, Tenens is a talent and her design is clever and cool.

Check out the purse bottom. Minus the Chinese Knot, and the I-Cord strands, with minor modifications, this purse could even make an interesting beanie or beret. 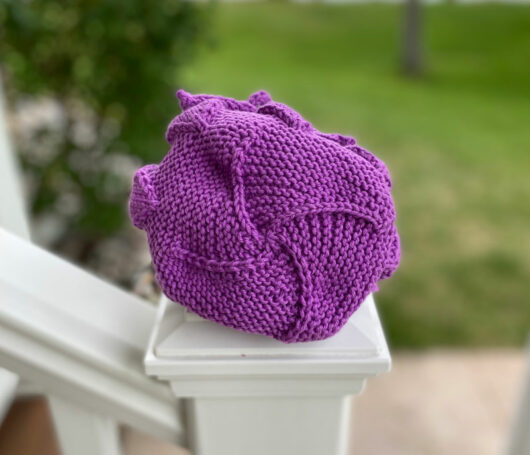 Purse with Leaves is definitely worth your knitting time. I knit mine in HiKoo by skacel Simplicity Solid, a DK merino/acrylic/nylon mix.

The young ones are so much fun to knit for. And I really appreciate it when my granddaughter tells me what she’d especially like. 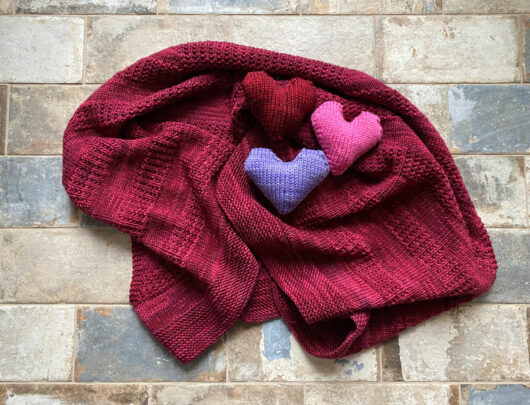 Just for fun, I knit and added a few hearts to one of my granddaughter’s recent care packages. Long distance grandparenting can definitely tug at our hearts at times. These hearts are Jackie Ziegler’s Love Hearts, knit in assorted worsted weight oddments (laying atop my Fichu Bleu shawl). 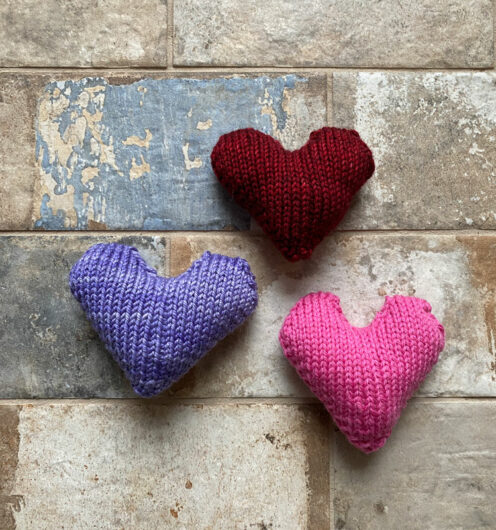 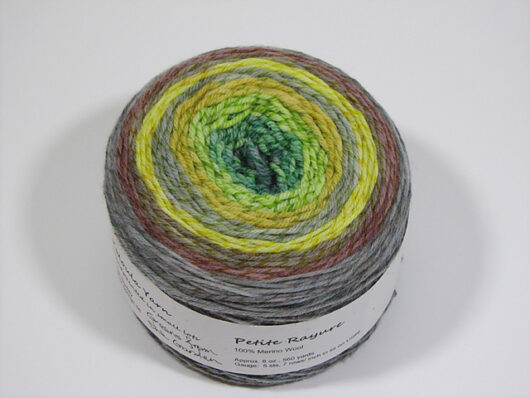 So pretty. Kaloula Yarn. Hand-dyed by “up north” (Michigan’s) own, Karen Bradley. 560 yards of a beefy DK weight. I knit it up, well at first, during Bradley’s Ravelry 2013-2014 mystery knit-a-long. The mystery unfolded to be her Cascading Leaf Shawl. The recipe is still available on Ravelry, clue-by-clue. I blogged about my shawl here. And I kind of wowed myself with how excellent it turned out.  A real showstopper. 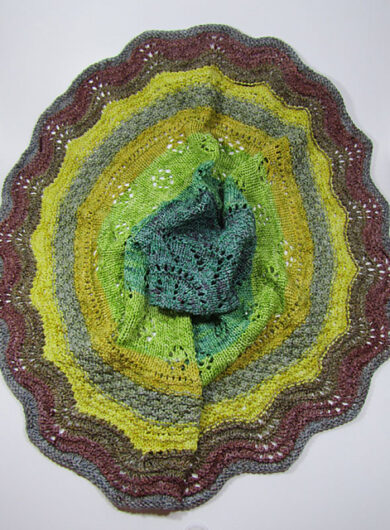 But at some point, the showstopper lost its appeal. This yarn is so cool and the pattern is so sweet that might seem like blasphemy. I don’t know exactly why but it just felt too colorful. I think. Or too eye-catching. It turned out I wasn’t wearing my beautiful shawl.

One evening, not long ago, I put the shawl on one last time. I looked at myself wearing it and, per Marie Kondo, I (sort of) thanked it for its service. Then I set to looking for my woven-in end and started unraveling. As I frogged, I wound the yarn back into a ball. Then I wound it onto my swift. I gave the yarn a good steaming, which successfully worked out a lot of the kinks and…have a look. 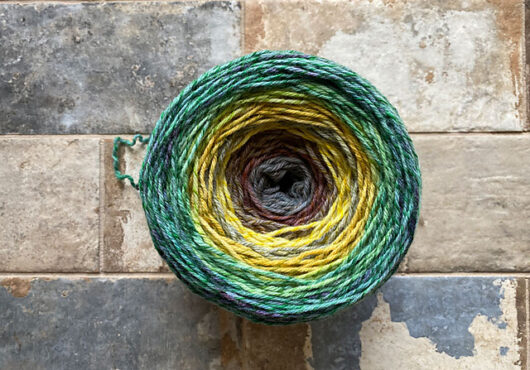 This might be some kind of ultimate Marie Kondo experience.

I’d knit the scarf once before and this is how it ended up in Paton’s Decor, a 25% wool 75% acrylic workhorse of a yarn. 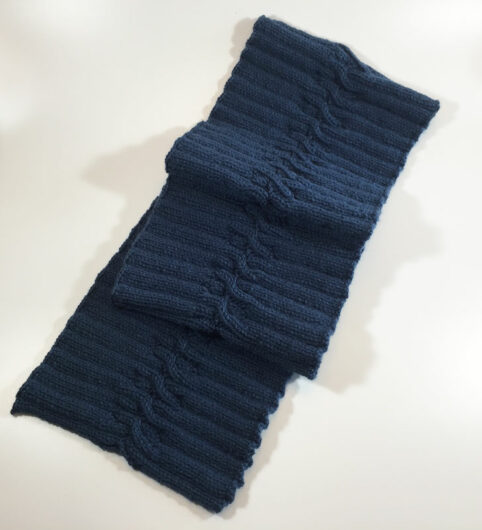 I made some modifications to the pattern, described near the end of this post. I thought it a fine scarf, including because of this nifty trick you can do with it. It ended up being a successful charity silent auction item. 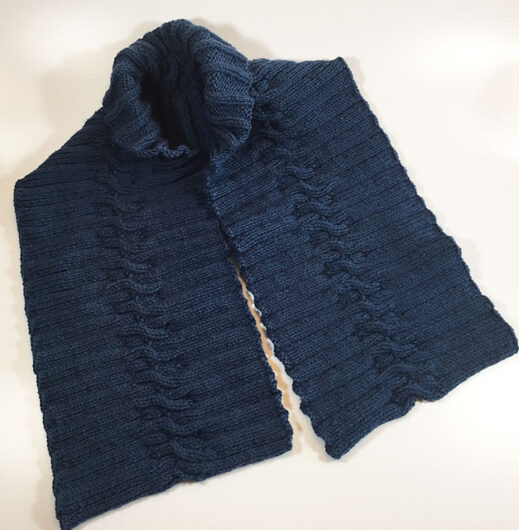 I decided my Petite Rayure was just the ticket for this lengthwise knitted scarf. And this time, except for increasing the cast on to lengthen the scarf, I followed the pattern exactly and made one cable twist along the center spine. 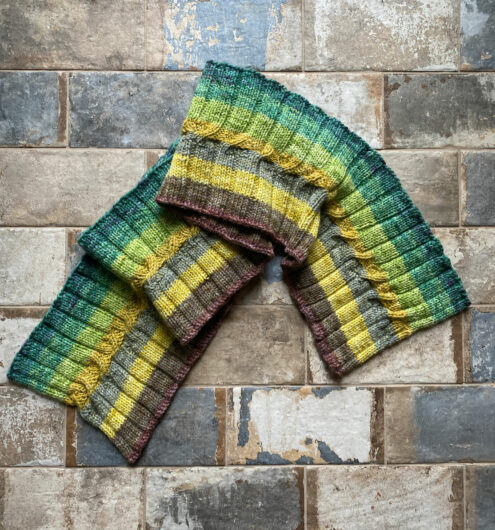 I cast on 352 stitches instead of 250. That worked out fairly well. I simply centered the two-stitch decrease (and later the two-stitch increase) that frame the central cable row. The ribbing worked out correctly with 352 stitches, both the k2 p2 and the k4 p2 sections. But the number of stitches was off (minus 2) for the cable row to work perfectly. I just left 4 stitches in ribbing at one end. If I’d been a tad smarter, or a tad less knit-lazy, I’d have frogged that cable row and started (and ended) with two “extra” stitches.

I decided to use a somewhat decorative cast on and bind off, thinking that a bit of stiffening to keep the ribbing from bunching at the edges would work well. I used the Chinese Waitress Cast on and the matching Double Chain Cast off.

Once the knitting was complete, I soaked the scarf in a tepid Eucalan bath. That both washed the yarn and took the last of the kinks out. 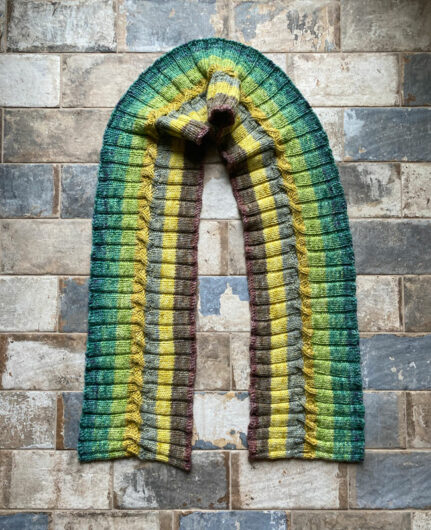 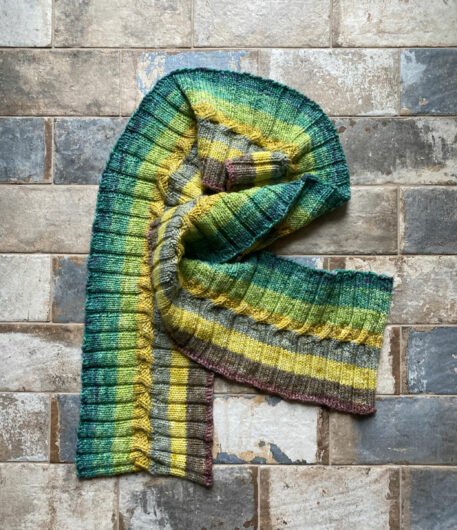 I tried, unsuccessfully, to help out all you “please I need this pattern” folks by looking for Classic Elite’s Lavish Rib Cable Scarf pattern on the Wayback Machine. I got close, but sorry no cigar. 682 billion web pages saved on one site defeated me. If you’re Mr. Peabody or Sherman and can locate the pattern via the Wayback Machine, please leave a comment and I’ll add the link to my post.

I am so so liking this scarf!