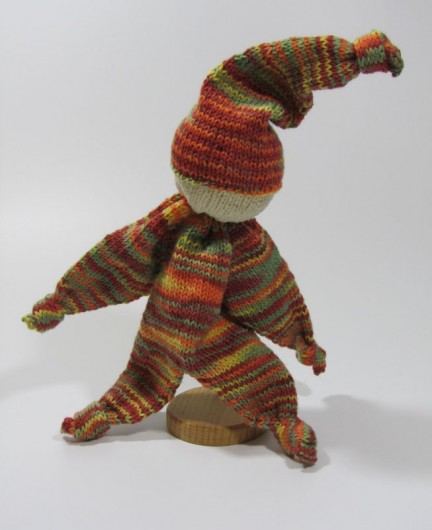 This little guy is great fun to make. He’s knit all in one piece (except for his hat), with a clever use of double-point needle shapings. I love the sense of movement his floppy limbs evoke. 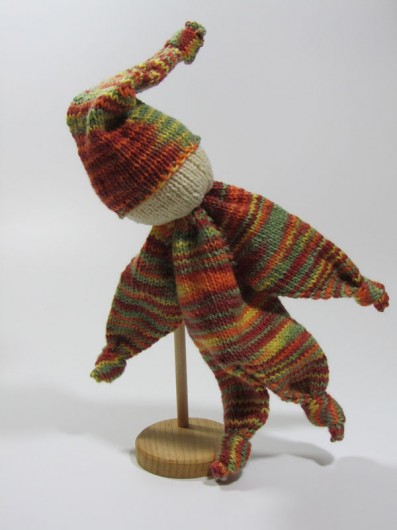 Knubbelchen is a creation of Raveller Pezzi888. Her pattern is available free on Ravelry. More than 1400 Ravelers have knit the little guy, or his girlfriend, and posted their projects on Ravelry. Mine is knit in Lorna’s Laces Shepherd Sport Multi in the Glenway Colorway. 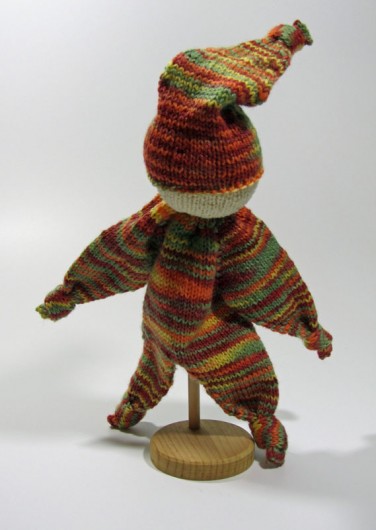 I think soon his girlfriend will join him. They’ll make quite the pair. He’s waiting patiently for her for now. He already has another friend over at Isaac’s house. 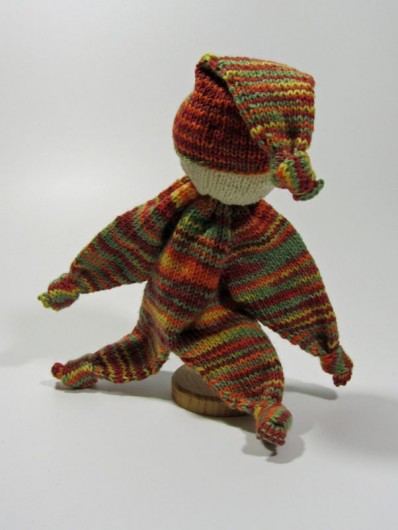 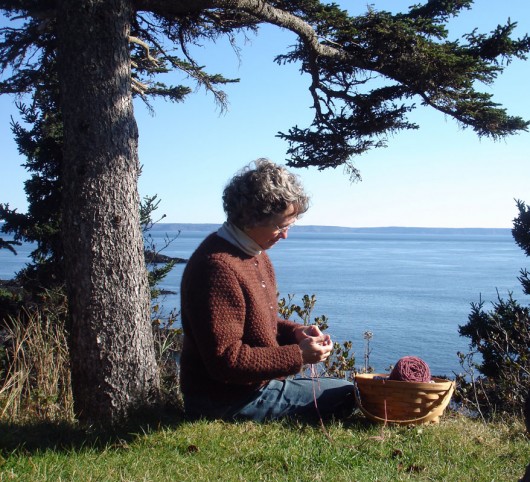 Linda Courtney is the designer behind Knitwise Design. She lives in Lubec, Maine—the easternmost town in the United States, near the Bay of Fundy. She’s been a maker since childhood and recalls “desperately” wanting a baby doll in a cradle that was advertised on TV. It wasn’t in the family budget, so Linda used her mom’s fabric scraps and an oatmeal box and soon had a cradle and matching blanket for her doll. That was an early lesson in “how much more rewarding it was to make things yourself.”

Linda’s grandmother taught her to knit when Linda was six. It didn’t take hold at first. She recalls a red and blue acrylic scarf that sat unfinished for “a few years.” At 11, spurred on by wanting to make something special for a friend, she knit her first finished object: a sweater. After that, Linda was a sweater-making machine. She knit sweaters for friends and for family. She explains she “was hooked.”

Elizabeth Zimmerman was Linda’s knitting mentor and, in fact, her life mentor. Linda was 26 and “joyously knitting baby sweaters out of anything at hand, even rug wool.” She read EZ’s “Knitting Without Tears” and credits that book with forever changing her knitting and her life.

“Reading Elizabeth Zimmermann opened my eyes to the possibility of not following the pattern – the expected path in life. With that influence, I made some very unconventional decisions, and just like in knitting – I got a life that was custom designed for me!”

EZ is who “first empowered” Linda to make her own pattern for her life “instead of following the directions.”

Today, Linda credits her various knitting communities with providing her with inspiration and support. She meets with a knitting group in Lubec and “looks forward to every meeting.” She is also part of the larger community of knitters on Ravelry, where she and I met, in a digital sense. With the launch of Knitwise Design, the community of independent designers active on Ravelry has been an influence and a help.

So has living in Lubec. Several of Linda’s patterns are “directly inspired by the amazing natural surroundings.” Her Creek Bottom Cardigan, below, is knit of a bulky weight yarn and a worsted weight yarn. It’s an easy-to-do imitation of the almost-impossible-to-knit bramble stitch. The result represents the “pebbly bottom of a cold creek in the mountains.” 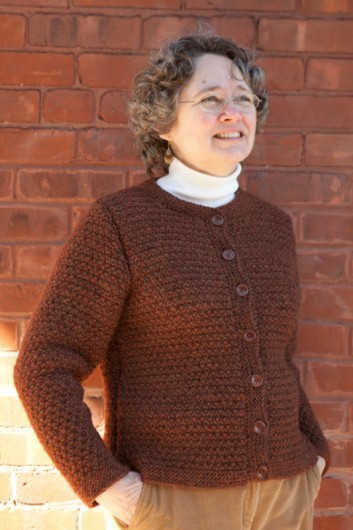 Tidal Cove, modeled here by one of Linda’s daughters, was “inspired by the tidal cove across from my home. Three-dimensional folds give it an almost organic form, while also representing the rhythmic movement of the sea as the tide comes and goes.” 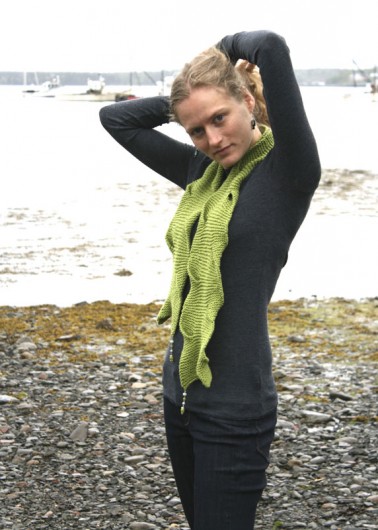 The pace of life in Lubec is “so removed from the standard American city or suburb” that it’s “very conducive to creative pursuits.” Linda explains that the closest shopping mall to Lubec is a two-hour drive and the nearest stoplight is more than 50 miles away. “Less distractions,” the influence of Lubec’s artist community (including Linda’s musician-composer husband), and the natural beauty all “stimulate the creative energy.” Linda finds that the long winters are especially inspirational.

Since August of 2011, Linda has released 12 designs, including a sweater, vests, hats, scarves and socks. She’s designed for men, women, children and babies. She plans on keeping her designing eclectic. She’s “having way too much fun to narrow down my ideas to any special niche.” Linda thinks it might make sense to focus on a particular niche “from a business point of view,” but her approach to designing “hasn’t changed much since I was making things as a child.” She is still usually motivated “by needing something specific” for herself or to give as a gift. Bumpa’s Vest was a birthday design for her father (“Bumpa” to his grandchildren.)

Jo-Jo’s Vest, with Linda modeling the prototype below, was designed as a gift for Linda’s mother. 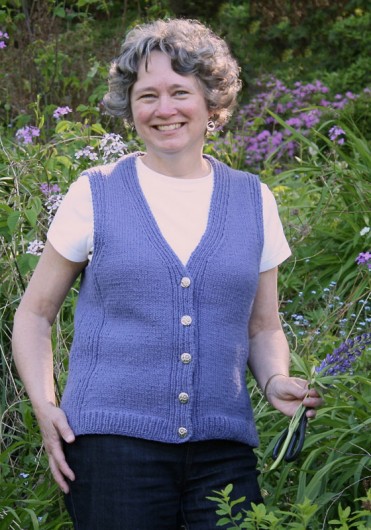 And the original Castle Hat, shown below, was designed as a gift for her son’s long distance hiking friend whose trail name is Castle. 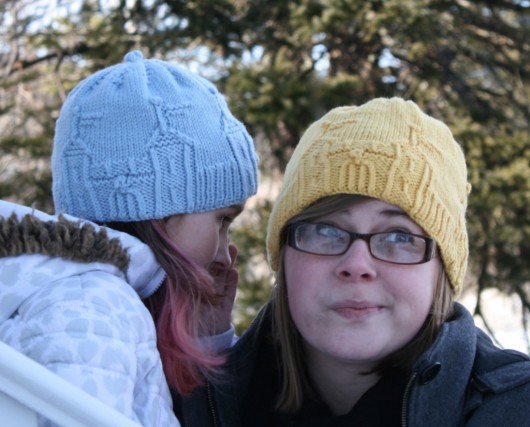 Even Linda’s two newer sock patterns began life as gifts for friends.  Check out Cam’s Camping Socks and Linda’s newest design, Sock Lover’s Socks. (You won’t have any trouble figuring out which is which.) 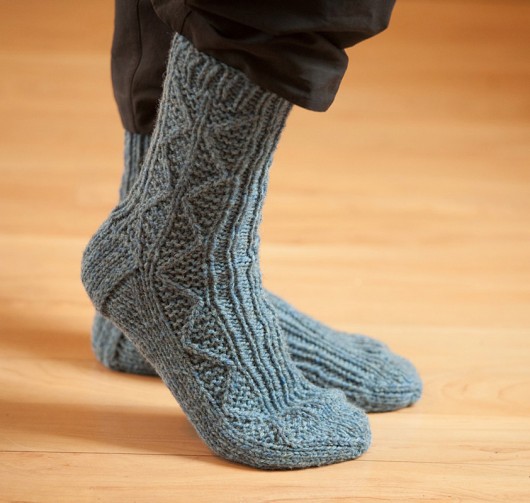 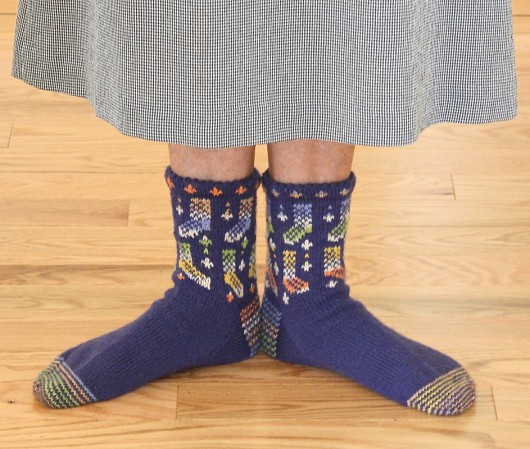 Linda explains that she “likes variety” and “challenging myself with new things, so I guess I am not going to be easily categorized as a designer.” So we’ll continue to see a variety of cool patterns from Knitwise Design.

And in addition to being committed to a mix of the sensible, the classic, the whimsical, and the stylish, Linda is committed to investing in her patterns. Every pattern is both test knit and tech edited. This kind of attention means that her patterns are “clear and easy to follow…without errors.” It takes “a lot of effort and time—and money for the tech editing” but Linda wants “to feel confident that the patterns I am offering for sale are the best they can be.”

Linda is planning a number of new designs in 2014. She’s working on some scarf patterns in the new Briggs & Little yarn “Lite ‘n Fancy.” She’s also received yarn support from Maine’s String Theory. We can expect a small shawl pattern this year and likely another sock pattern. And you saw it first here, methinks a cowl pattern in a wonderfully textured wavy stitch is soon to be released. 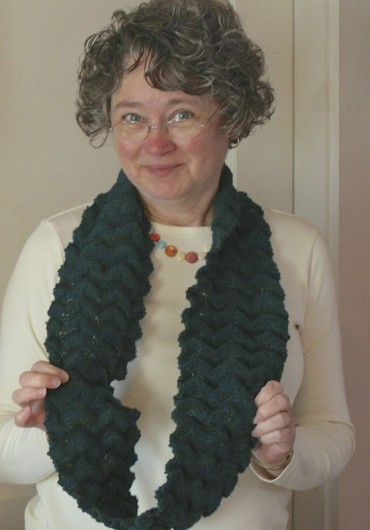 Editor’s note: Thanks so much, Linda, for allowing me to use your photos and for making time for this interview. 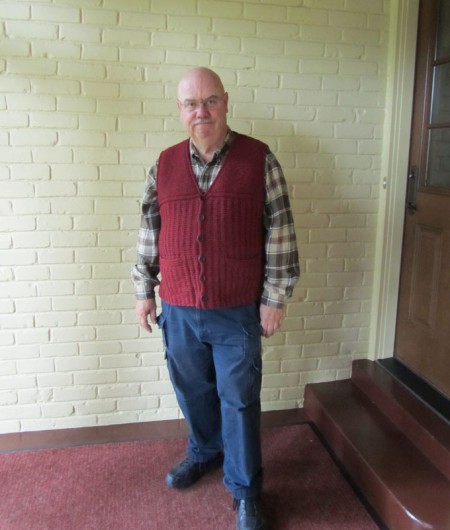 This cool vest, designed by Linda of Knitwise Design, goes by the idiosyncratic name of Bumpa’s Vest. “Bumpa” is Linda’s children’s name for her dad (their grandfather). Linda designed this garter rib and garter stitch vest as a birthday gift for her father.

I am a huge fan of garter stitch. Working the body of the vest in garter rib is a great touch. And, of course, no guy’s vest is complete without pockets. Although this was designed as a man’s vest, I see it as unisex. In fact, the next one off my needles may be for me. 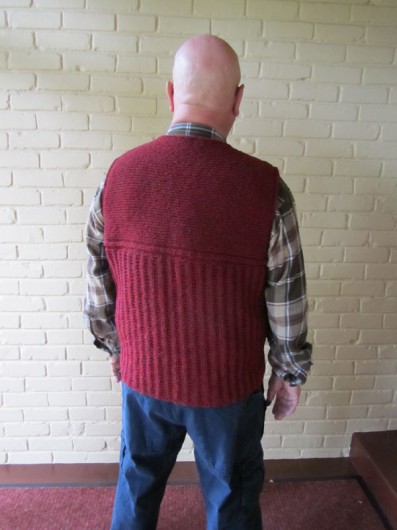 The front edges and armholes are trimmed with I-cord. Extra rows of unattached I-cord form the button hole loops. In my original version, the buttons were straining too much against the I-cord. But a switch to shank-style buttons solved that issue quite nicely. 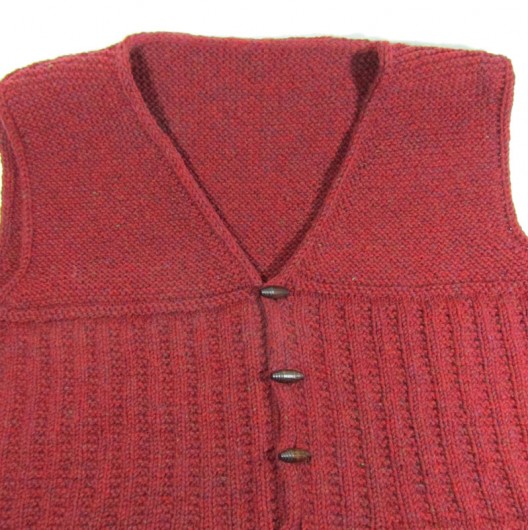 My version is knit in Harrisville Designs WATERshed, in the Barn Door colorway. Such a great rustic-style worsted!

Stay tuned for a Long Lake Yarns first: a profile of a designer. I’m a huge fan of Knitwise Design’s growing collection of patterns. Watch for my post about Linda Courtney a/k/a Knitwise Design coming up soon.

On the drive up from downstate we saw deer feeding in cornfields where the snow is partly melted. Not just one or two deer, but dozens and dozens all trying to glean in fields already pretty picked over.

This was the scene on Long Lake in the early morning on March 15th. It was 20 degrees and the wind was blowing fiercely. 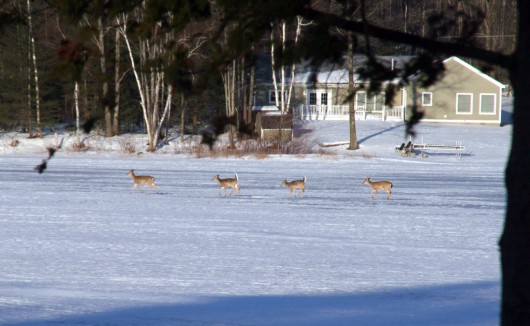 These four came from the area where the peninsula juts out and creates our little bay and headed across the lake to where reeds grow in the summer. No reeds today. In fact, nothing at all vegetative for deer to eat on the lake.The group paused around ice blocks left behind by fisherman. Nothing to eat there either.They headed to the narrows. 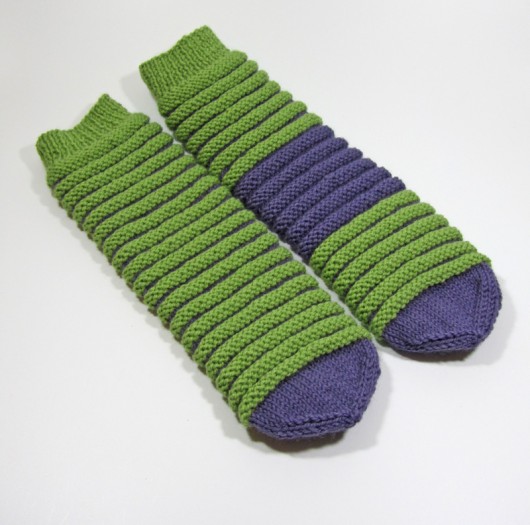 Michigan, like the rest of the Midwest, has been trapped in the polar vortex for weeks. When it hasn’t been below zero it’s been snowing like crazy. We’re bracing for something like 8 inches of snow tonight. So, it’s been a good winter for warming up cold feet. But you can only stay by the fireside for so long and then you have to venture under the chilly bedsheets. These are a modification of Jo Sharp’s “Bed Socks” from the Vogue Knitting On the Go series.

The pattern calls for a DK weight, but I wanted something beefier. These are knit from Plymouth Yarns Encore, a workhorse, easy-care, 75% acrylic/25% wool mix. I decided that laces would be superfluous and just knit them a tad long. They stay put nicely. The plan wasn’t to have them be mismatched, but this pair was a real yarn-eater and I was running out of the green. These are knit flat and seamed. Being seriously crochet-impaired, I seamed by picking up the stitches on both sides and then doing a 3-needle bind off. I thought the resulting raised ridge would resemble a crocheted chain. Resemble is the key word there. Not an elegant solution, as the seamed side shows. But great for keeping feet nice and cozy. 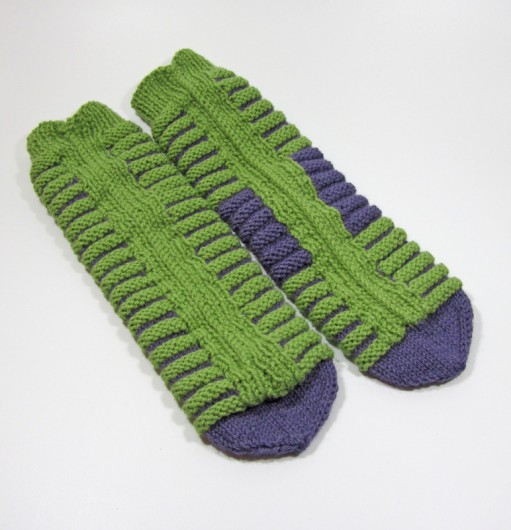 This next lovely is Ann Budd’s “First Time Tube Socks,” a pattern from Interweave Knits Holiday 2009 magazine. I should apologize to Ann and her fine pattern for my choice of yarn. But every yarn, on sale or not, deserves being knit up into into something or other. This is my “on sale” Berrocco Comfort something or other. These tube socks are very comfortable in bed. Unlike the printed sheets, they are also very ugly. 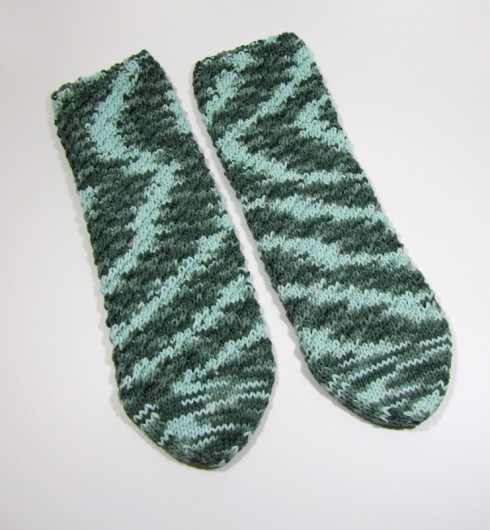 Worked up in a nice calm brown, these would have been comforting to the eyes as well as to the feet. Let’s just say no more and change the subject.

Yuko Nakamura’s “Non-Felted Slippers” have been in my queue for more than two years. I hesitated to knit them because I was unsure if slippers knit on two needles in a bulky weight yarn would work out well. Plenty of Ravelers have modified the pattern to work in the round, but I decided not to monkey with it. I just trusted the thousands who have knit this free pattern “as is.” The pattern doesn’t disappoint. 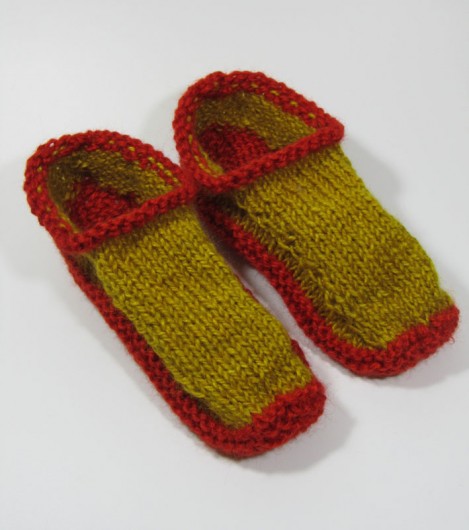 I honored the length of time the pattern spent in my queue by knitting it up in some of the oldest yarn in my stash, Aberdare Yarn’s 100% two-ply bulky mohair. I purchased it about 20 years ago, intending it for doll hair that never got knit. The yarn was spun in Kenya. 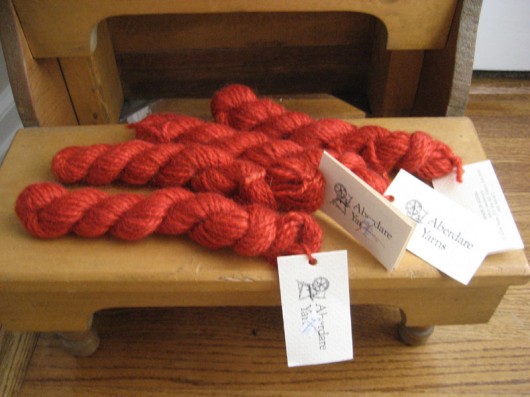 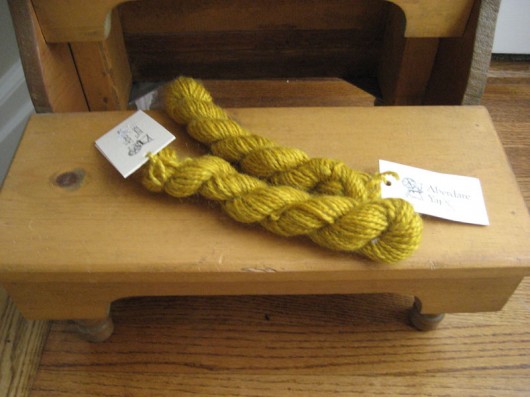 Lovely fuzzy yarn, but difficult to find a proper project for it. I think these slipper socks put this special yarn to good use.

I decided to try the pattern again, in a worsted weight, with an added cuff. When friends, even kids, come over and take their wintry boots off at the door, I’d like to have an assortment of slippers for them to wear if they want to. These were knit in a beefy worsted weight yarn, Blackberry Ridge Color Flow, from one of the browner sections of the Autumn colorway. For the cuff, I just continued to knit instead of bind off, decreasing one stitch, and working a knit 2, purl 2 ribbing for 25 rows. 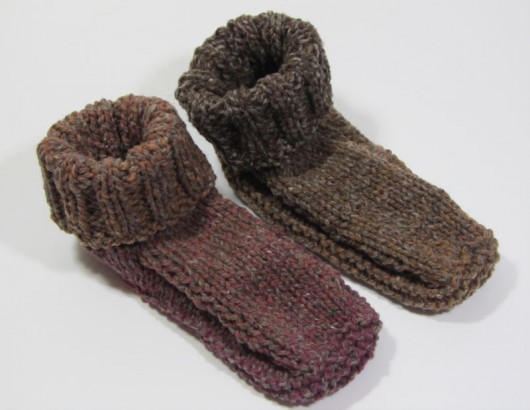 Encouraged by the results, and pleased to be using up so many oddments, I worked up one more pair. This time I used a partial skein of Old Sage Brown Sheep Bulky for the soles and leftover Berroco Vintage Chunky in Breezeway for the cuffs. 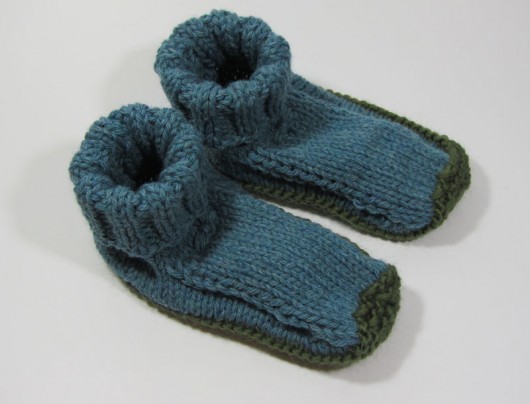 I’m looking forward to tackling next winter’s cold with a basket of comfy slipper socks kept by the door.