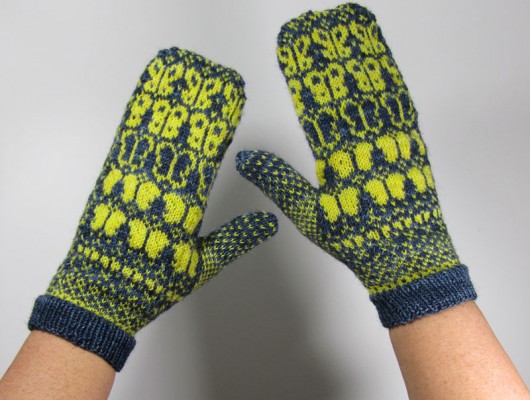 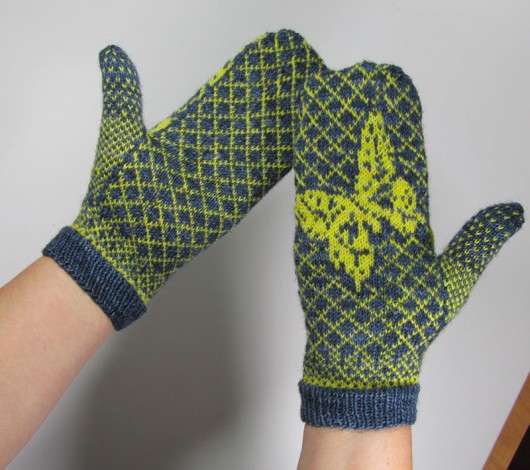 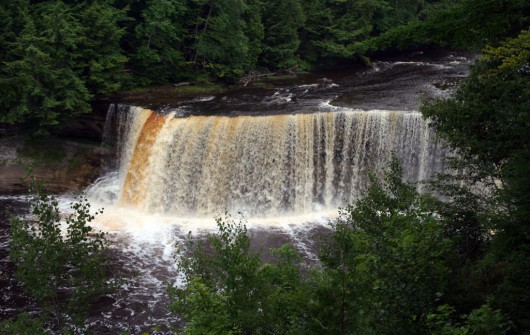 These are Michigan’s Upper Tahquamenon Falls, located in the eastern upper peninsula. They are what everyone comes to see in the state park. There’s much more to see, but the upper falls make the biggest splash and the most noise.

Probably the most asked question is why is the river brown. First off, it’s not polluted. Pure Michigan does not have polluted rivers. Actually, we have them, but this isn’t one. And to the serious young man who carefully explained to his beautiful companion that the river is brown because of all the iron ore in the water, that’s not right either. The river is brown because of the tannic acid in it. Tannic acid is a byproduct of decaying vegetation from the many hemlock, spruce and cedar trees in the forest here. It turns the water a deep coffee color, but it isn’t dangerous and it doesn’t hurt the fish.

Maybe the next most asked question  to Globo Surf is why is the river so foamy. To repeat, this is not pollution.  It is not phosphates from detergents. The river is foamy because all the organic deposits turn the water very soft, as in not hard, as in not much when it comes to mineral deposits. The decaying organic material is high in lignen-protein complexes (I read that on an placard in the park) and it’s something like egg whites (that’s what the placard said) and the action of the falls makes it foam.  Try googling lignen-protein complex and if you understand even a word of any link that comes up, “you’re a better man than I am, Gunga Din.”

An easy 15-minute walk, along a wide tame path that looks like this, brings you to the upper falls: 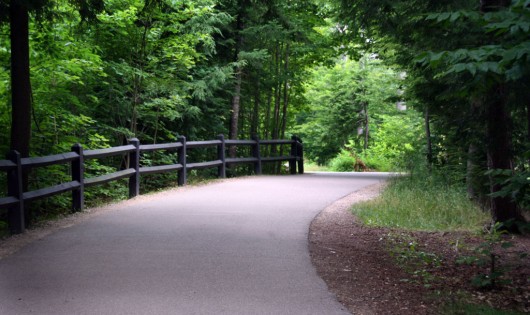 The lower falls is a whole other something. The river curves. You have a view of two sets of smaller falls, with an island in the middle. There are rowboats to rent, if you like. And you must be certain never to attempt what these five young fools are doing, unless you are determined to remove your genes from the gene pool: 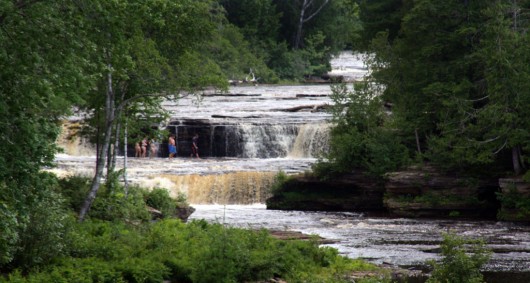 The Tahquamenon River begins about 70 miles from the falls. The nearly 800 square mile watershed drains into the river and by the time it gets to the falls it’s powerful enough that the “mighty” Tahquamenon is almost a well-deserved nickname.

The river itself is slow-moving and perfect for a novice kayaker with good kidneys who won’t be needing a pit toilet anytime soon. There is one, a pit-toilet, at the public ramp at the Rivermouth boat launch. We put our kayaks in there and paddled about two hours upstream. The current helped get us back more quickly.

At first, the stained water is in such stark contrast to our clear Long Lake that it’s hard to know where to focus your gaze. I love to look for fish. We saw none. But I’m sure many saw us. We did see a few jumping, though. Near the river mouth, in the deep channel, under the bridge, and until you lose the highway, is supposed to be home to many game fish like northern pike, smallmouth bass, muskies, and walleye. I’m told you should try “dragging a lure or crawler harness.” I didn’t know fisherman harnessed nightcrawlers and I’m just passing on what I read in the Tahquamenon Falls State Park visitors’ guide.

With no darting fish to capture my attention, I had more time to be immersed in the wildness of the place. 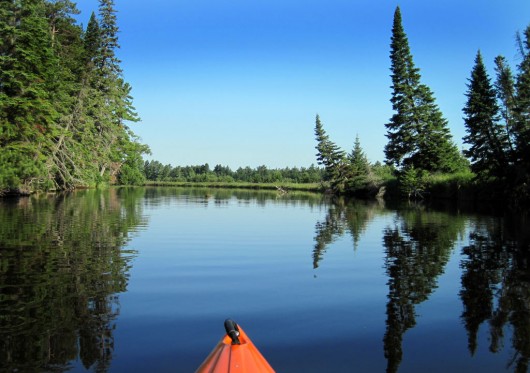 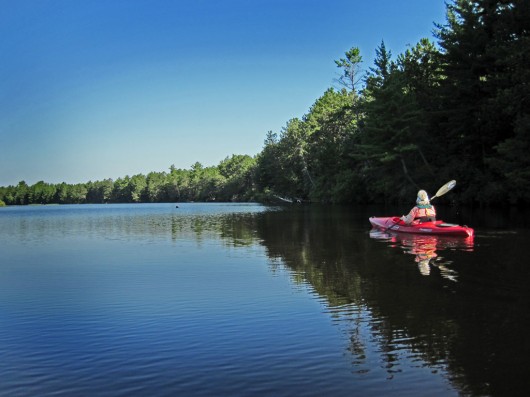 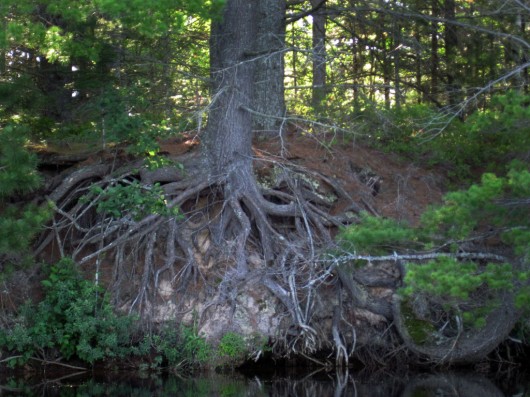 Me looking at fish couldn’t happen in this river, but there were plenty of waterfowl to watch. We kept a keen eye out for ravens or bald eagles or pileated woodpeckers. They are definitely in the area, though we saw none this trip. There were lots of painted and snapping turtles sunning themselves. They always make me smile, including because turtles are my son’s favorite water creature. He will even endure a tumble out of his kayak from time to time (OK, once), trying to catch one before it rouses and scoots away. 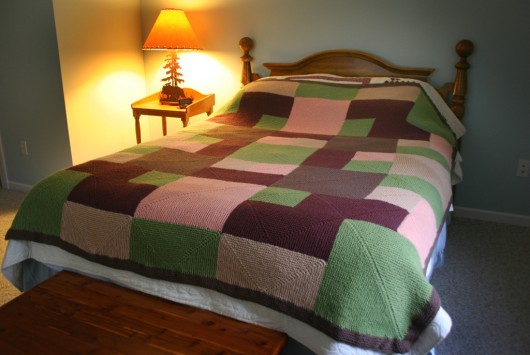 It’s been a bit quiet lately in the knitting corner of the blog. That’s because I’ve been working on a large-sized Rambling Rows afghan. This wonderful pattern is from Cottage Creations’ Carol Anderson and Pat Penney. It satisfies all the garter stitch lovers among us. Garter stitch is the first stitch we learn as young knitters. Every time I return to it, it feels familiar and soothing.

This afghan has 55 mitered sections and is a major project for sure. This is my tenth Rambling Rows, the fifth full-sized one I’ve made. It is photographed above on a queen-sized bed. This one is knitted of Plymouth Encore. Easy care seems like a good idea with a project of this size.

I am a bit unsure of my color choice. But maybe cranberry, tan, brown, peach and green sort of work well, especially because this afghan will be living in a room with a cranberry accent wall.

Cottage Creations’ booklets are not available (yet) in downloadable form. But lots of on-line shops carry the Rambling Rows booklet as well as many local yarn shops. 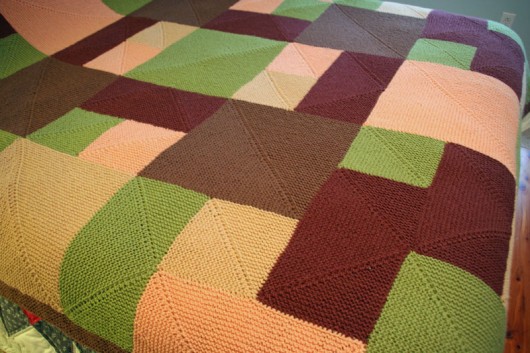 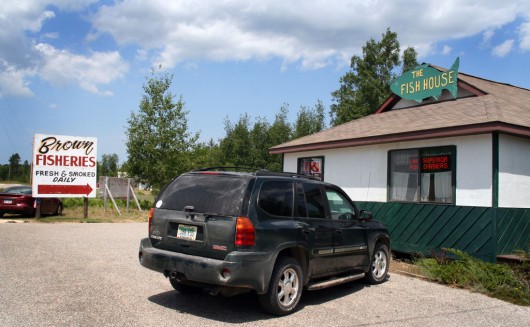 Whenever you go to Paradise, eat at Brown Fishery’s Fish House. In fact, whenever you are within a car tankful of gas from Paradise, consider eating at Brown’s. Open noon to eight. They have the most fresh, best, whitefish ever eaten. Really. This little unassuming place, where on one visit the waitress told us the fish were so fresh they were still flipping around in the kitchen and then brought out a just-caught 30 inch whitefish to illustrate her point, is worth a special trip to Paradise even if you don’t care for scenes of incredible natural beauty. If not for Tahquamanon Falls and The Great Lakes Shipwreck Museum and birdathons at Whitefish Point, come to Paradise for lunch or dinner at The Fish House.

You can take home smoked whitefish or smoked trout, or whatever’s in season for some additional yummy tidbits to tide you over until your next visit. Brown’s Buddy B. crew catches the fish. Brown’s kitchen crew catches the live customers. The Browns have been fishing for five generations and I hope that their dynasty lasts for many more generations.

This was our heavenly lunch for both our days in Paradise. 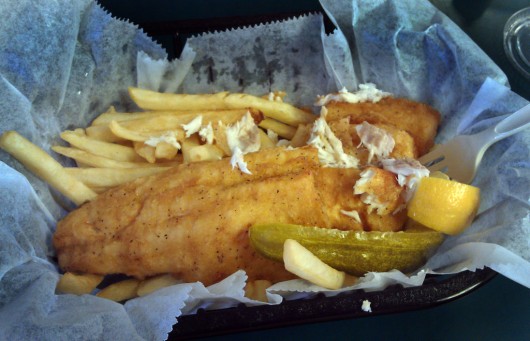 And, yes, the cole slaw was great too! 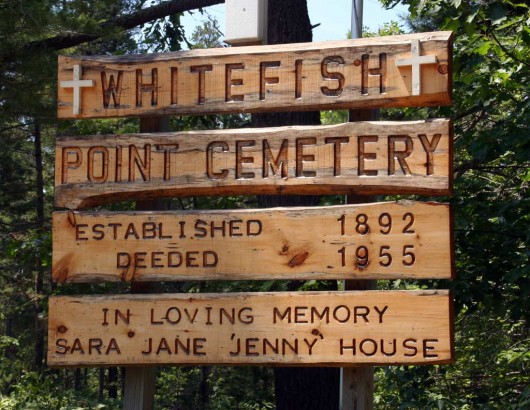 This is the Whitefish Point Cemetery. To find it, take M-123 north through Paradise for about 10 miles to W. Wildcat Road, a  gravel road marked by a sign to the Centennial Cranberry Farm. Turn left. The cemetery is about 1.5 miles down the road, on the right, with its entrance marked by this sign.

It is a peaceful place in the woods, with family burial plots, some old but some new. There are graves marked “unknown. There are graves of many, many small children. There are finely carved modern headstones and a few finely carved old ones. But mostly this is a place of simple grave markers that leave you with a strong sense of just what a hard-scrabble place the Eastern U.P. has been and still is for many. 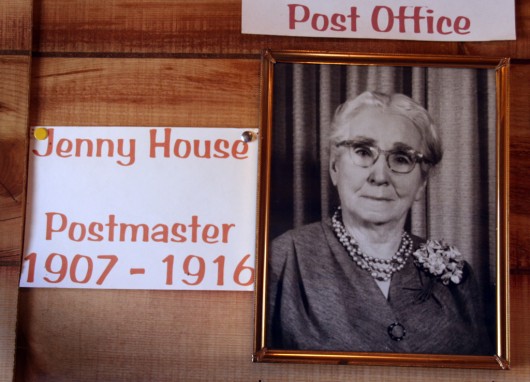 This is Jennie House’s grave. 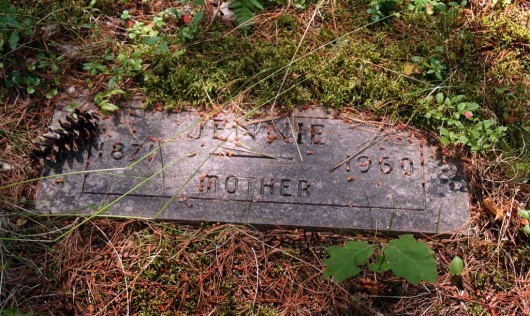 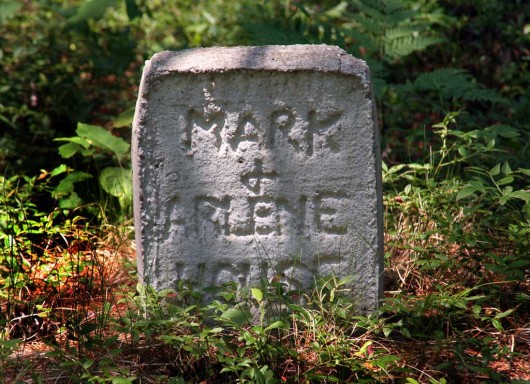 Sunlight filters through the tall pine trees. Moss covers the ground in many places. The forest floor swells with small hills and sinks with small valleys. This cemetery is a compelling, sobering place. It feels very peaceful and not too sad. 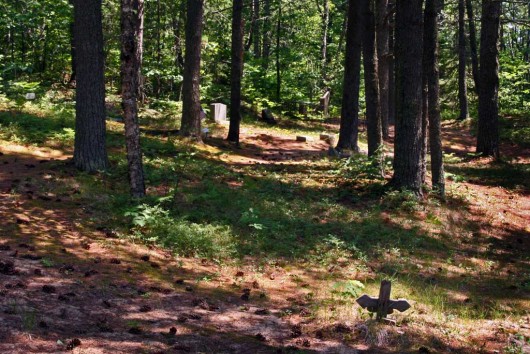 Some of the names of the dead are lost and have been marked “unknown.” But this grave still has the smooth Lake Superior stones in place, arranged as a cross. That was how someone chose to mark the place where their loved one was buried. 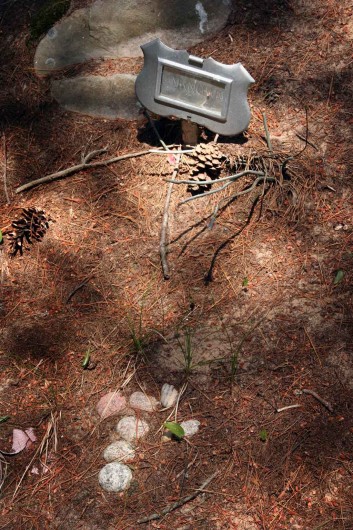 The names of the now-unknown dead are gone. But pieces of their original grave markers remain. 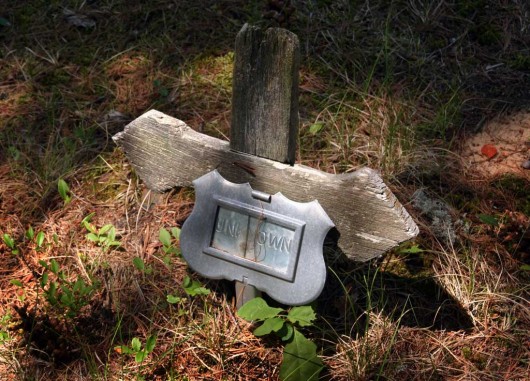 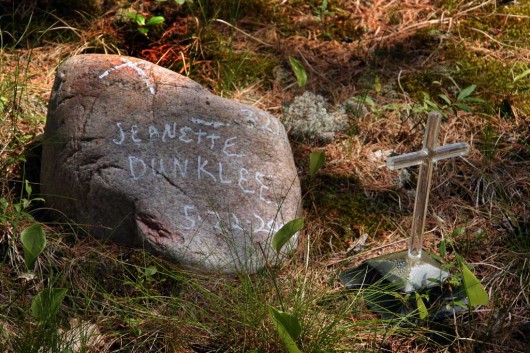 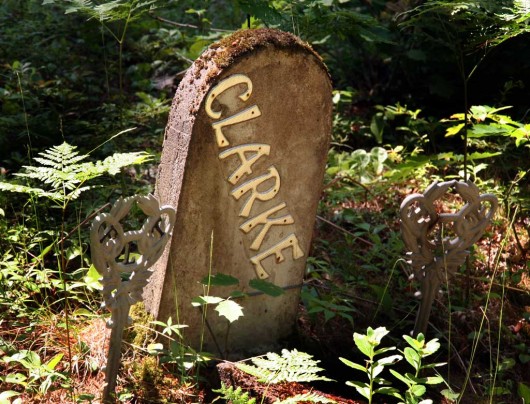 The cemetery has sections divided into small family plots. Some people can even visit their own burial site, reserved just like a table at some fancy restaurant. 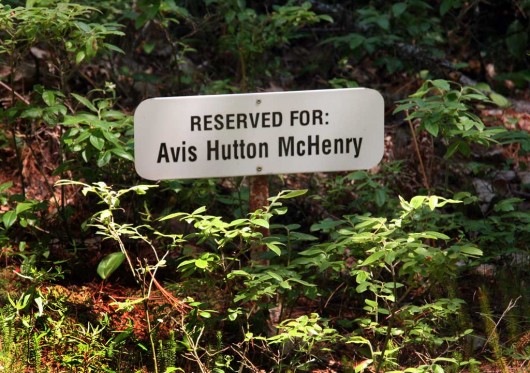 Here’s a link to who’s buried here and photos of their headstones.