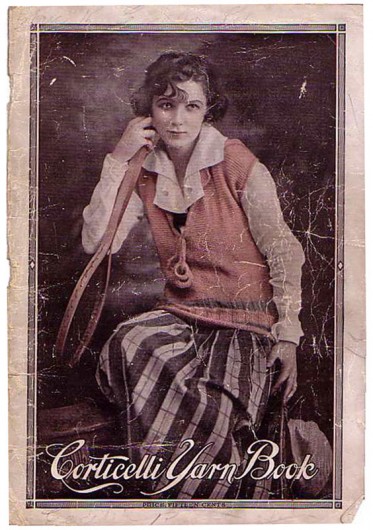 Ninety-three years ago, this young woman modeled fashionable knitted tennis wear on the cover of The Corticelli Yarn Book, “Lessons in Knitting and Crochet.”  The book contained an extensive assortment of fashions for men, women, children, soldiers and babies.  It was published by the Corticelli Silk Mills of Florence, Massachusetts.  Odd little crochet do-dads dangling in front, but other than that, somewhat modern styling.  Nice subtle color combination too.  Seems to hold up rather nicely, especially figuring this model was likely born in the 19th century.

“Holding up rather nicely” isn’t what comes first to mind for the “Silk Dresden Sweater” featured on the book’s inner cover page, though.  I don’t think knitters with a vintage knitting bent are going to be lining up to knit this one, “posed” here by “Mrs. Vernon Castle:” 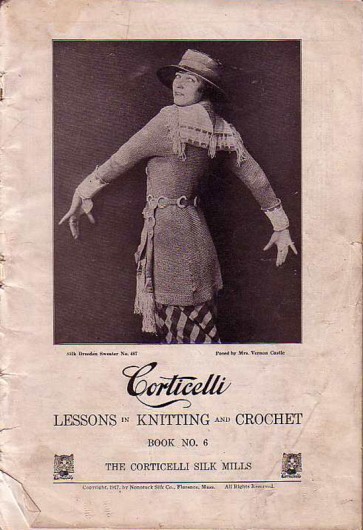 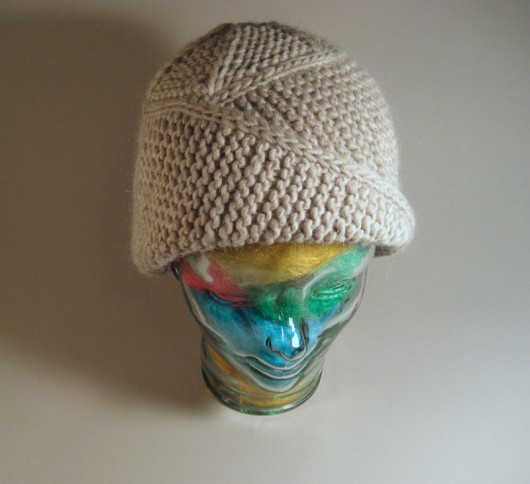 Jared Flood‘s wonderful new knitting book, “Made in Brooklyn,” is filled with updated classic designs.  Some of them, like Quincy, seem inspired by Elizabeth Zimmermann (a knit designer Flood admires).  The regular reader of my blog knows I admire EZ too.  Quincy is constructed of garter stitch, “I-cord” borders  (we are too politically correct to call them “idiot cords” anymore), and mobius construction.  A mobius is a mathematical surface with only one side, formed by giving a half twist to a rectangular strip.  Much of Flood’s work has a strong sense of sculpture.  It will take even an experienced knitter a good bit of time to figure out how this was knitted.  It is a wonderful pattern, knitted here in Lamb’s Pride Brown Sheep Bulky. 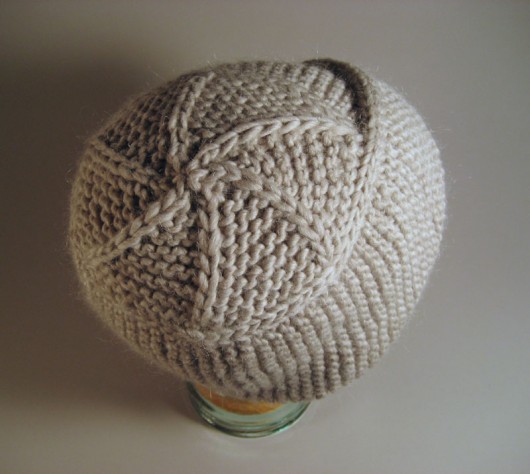 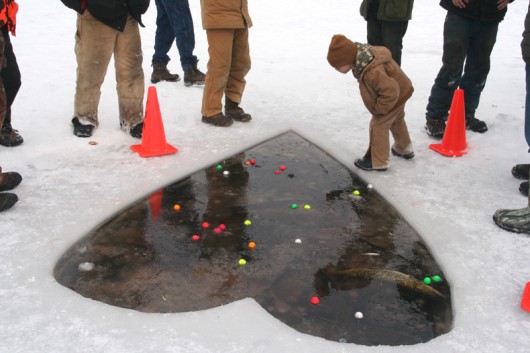 Fletcher’s Pond, with a surface area of 8,970 acres, is one of the largest inland lakes in Michigan.  It is a flooding created in 1935 by the Alpena Power Company.  The pond is shallow (no deeper than about 12 feet) and weedy–just the sort of lake where big bass and monster pike hang out.  Every mid-February, anglers assemble to try to catch the biggest pike and the biggest perch and all the sizes in between.  Carhartt Kid and his dad added a 28-incher to the well.  Every colored ball is a pike on its own stringer.  It was still early in the day and the biggest pike  in the well was just over 32 inches.  Last year’s winner was 40 inches. 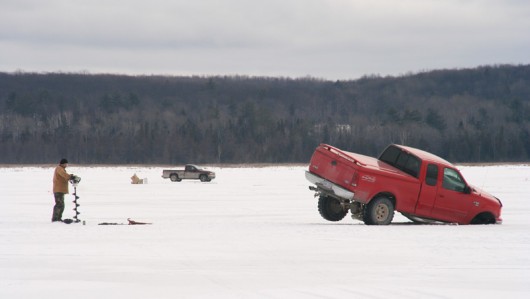 This angler was intent on augering holes for his tip-ups, undeterred even though the front end of his truck was sinking through the ice. First things first, I guess.  The ice was mostly about 20 inches thick, but he’d driven over an especially weedy section that hadn’t frozen solidly. 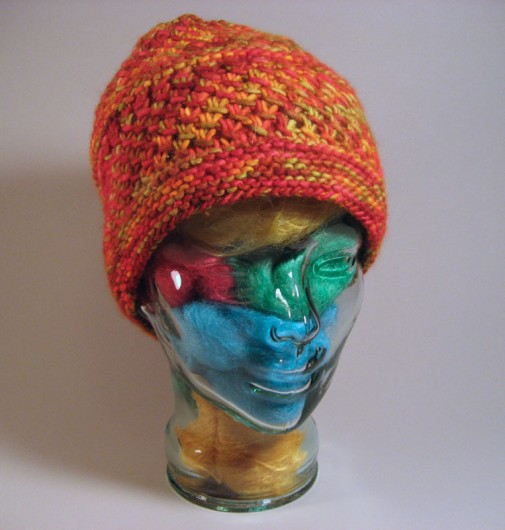 Knitting hats is pretty much instant gratification.  If you make a mitten, you have to make another.  If you make a sock, same thing.  A bored knitter, or for that matter an adventurous one,  can create mismatched pairs.  Still, such things must happen in twos.  But not hats.

It also helps, paraphrasing Elizabeth Zimmermann, that people will put almost anything on their head.  And since heads come in all sizes, a knitter with a bunch of humans in her vicinity can forget about stitch gauge.

This hat is “Amanda,” a free pattern by Gina House of Londonderry, New Hampshire.  (Ravelry’s Sleepy Eyes).  Ravelers have already knitted it 1570 times.  Mine is knitted of Malabrigo merino worsted, in the Snowbird colorway. 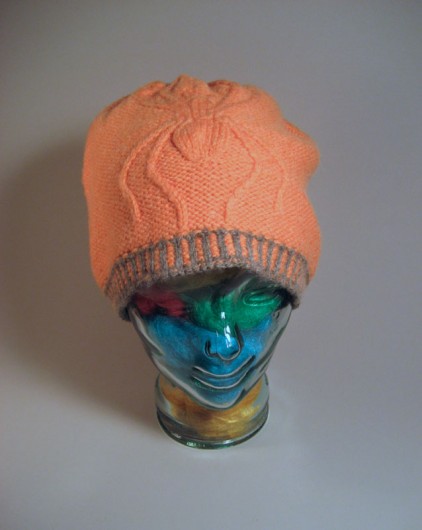 Below,  from left to right, is a seeded stitch hat using Debbie New‘s cellular automaton technique where you apply a bit of math to create a pattern.  Maybe Debbie’s degree in microbiology and raising eight children is the necessity that influenced her inventiveness.  Next is Wendy Keele’s Tassled Pull On Cap, minus the tassles.  And Mary Dominski’s Celtic Braid Hat in yarn from Blackberry Ridge Woolen Mill. 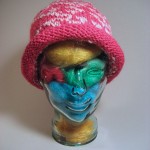 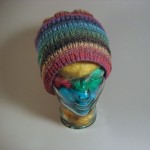 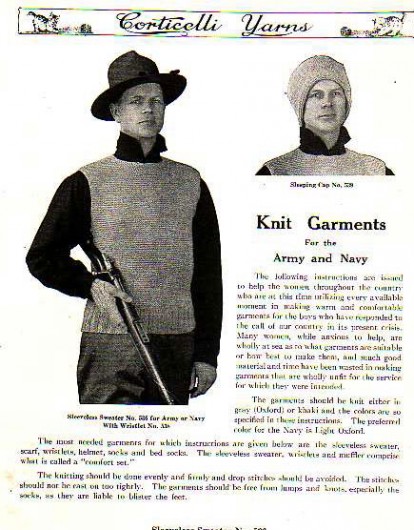 It was 1917.  The Corticelli Yarn Book, “Lessons in Knitting and Crochet” published by the Corticelli Silk Mills in Florence, Massachusetts provided “instructions to help the women throughout the country who are at this time utilizing every available moment in the making of warm and comfortable garments for the boys who have responded to the call of our country in its present crises.”  Women were cautioned to knit in either “gray (Oxford) or khaki” or “light Oxford” for the Navy.  Corticelli supplied patterns for a sleeveless sweater (above), a “sleeping cap,” two different wristlets, a muffler, an “abdominal belt,” a “cap for convalescents,” a cap and scarf set, socks, bedsocks and a helmet liner (below). A “comfort set” would be the sleeveless sweater, wristlets and a muffler (scarf).  “The knitting should be done evenly and firmly and drop stitches should be avoided.  The stitches should not be cast on too tightly.  The garments should be free from lumps and knots, especially the socks, as they are liable to blister the feet.” 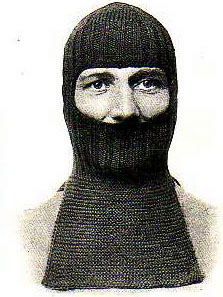 Today, Ship Support is “supporting America’s troops deployed in the War on Terror–one stitch at a time.”  The items need to be “closely knit or crocheted for warmth,” knit in colors suitable for men.  “Women in the military prefer these as well.”  Land’s End has teamed up with the Sailors’ Society to have us knit  wooly hats for chilly sailors. Knit for the Navy is looking for afghans.  Knitters are busy knitting glommits (a combination glove/mitten) and gauntlets (shooters gloves) for soldiers in Afghanistan.  The need continues and those who chose to knit for soldier and sailor relief organizations knit because they care.

Does this young one look too ready for the wars to come?  He modeled for Corticelli in 1917. 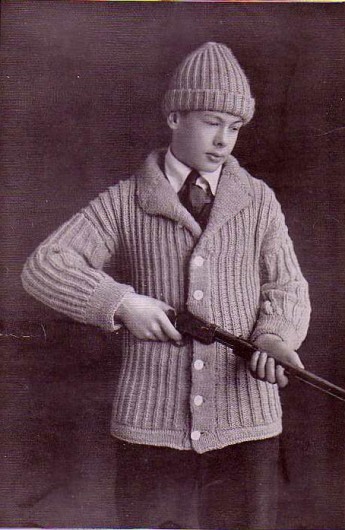