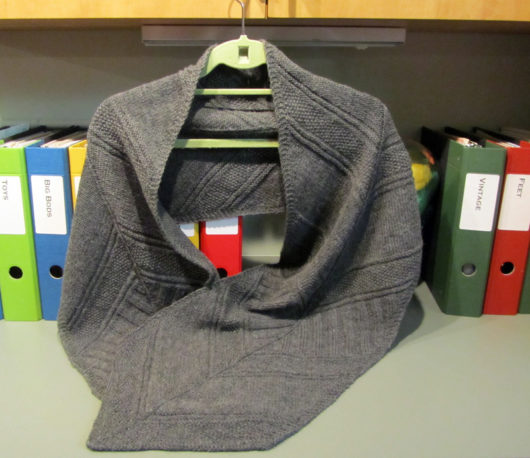 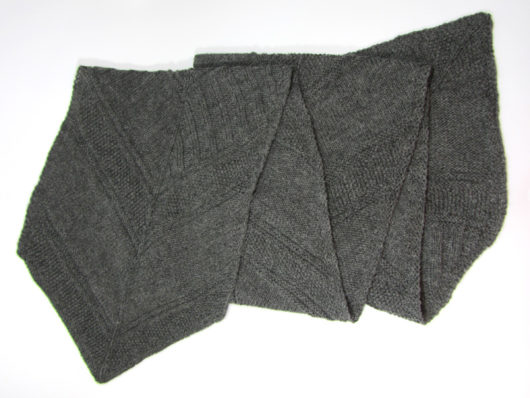 Is Cloudborn Fiber’s Highland the greatest yarn ever? Nope. Not even close, in my opinion. I’d have rather used the Madelintosh Merino Light, or Dream in Color Jilly, or Wollmeise Pure that Weissman’s pattern calls for. But I like getting a bargain and this was (and is) an incredible bargain.

The Cloudborn yarn–unlike the other weights of this company’s yarn I’ve knit with–was very splitty working on size 6 needles. Once I switched to my ChiaoGoo lacepoints the yarn was tamed. Some. But the bottom line is I have an excellent shawl, in a color and shape I like. This pattern looked a bit daunting to me at the outset, but it was actually quite straightforward.

This next small shawl/long neckerchief is a free pattern available on Ravelry: Minnie by Jumper Cables’ Annie Baker. 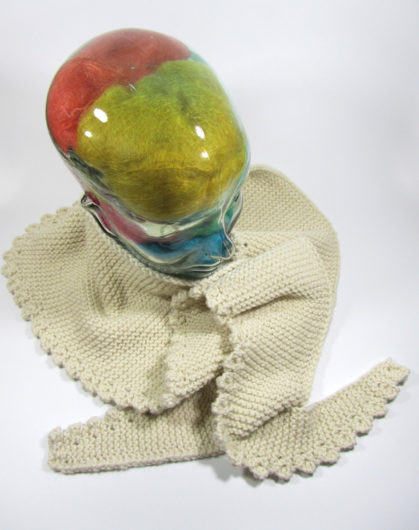 Mine is knit in the amazing Extra, by Blue Sky Fibers. It’s an Aran weight, 55% alpaca, 45% merino. It is soft, extra soft actually. 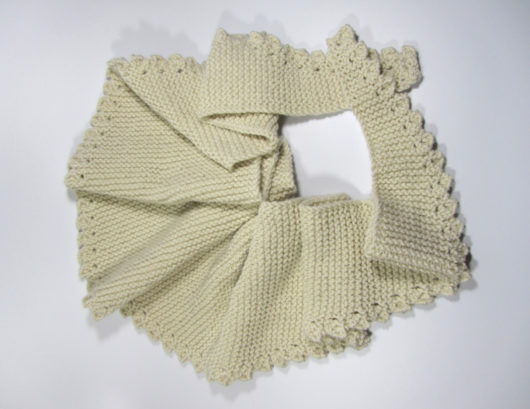 I am a huge garter stitch fan, but even for a fan it can get tedious. This pattern has just enough detail to make it interesting, while still being super easy.

Instead of 38 repeats of the pattern, I did 44. And then I started the decreases. My Minnie is 11 inches at the widest point. It’s an extravagant 69 inches from end to end. 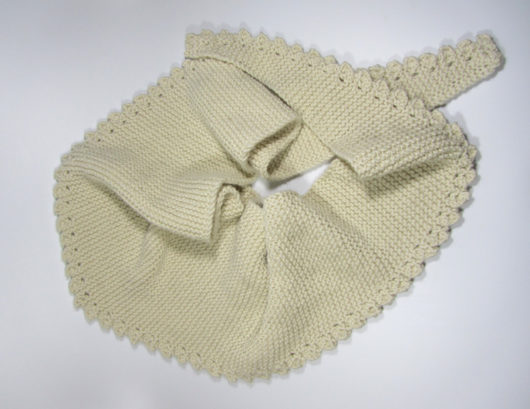 This is a wicked good little free pattern. Give it a try. And thanks, Annie Baker, for your generous gift to the knitting community. 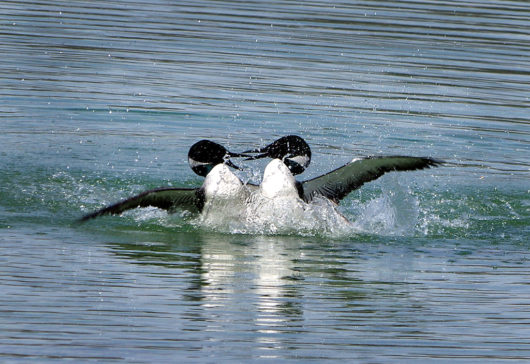 When the loons arrived on the lake, they weren’t all seeing eye to eye. It was sometimes more like beak to beak. There just seemed to be a little more tussling than usual this Spring. Plus there was lot of that scooting-around thing they do.

We’ve had loon chicks hatch as early as mid-June. In fact, back several years ago they hatched on Father’s Day, which always seemed sort of a nice coincidence. After all, loon dads do their sitting time on the nest, just like loon moms. And when the chicks are born, both parents work hard to feed the young ones.

We were concerned when we realized that there were no nests on Belly Button Island–the big island in the north part of the lake. Not to worry. One pair set up their nest on the west side of the small island just across from the public launch. And apparently the other pair just stood guard over the five loon nesting buoys at the big island, sort of faking everybody out. 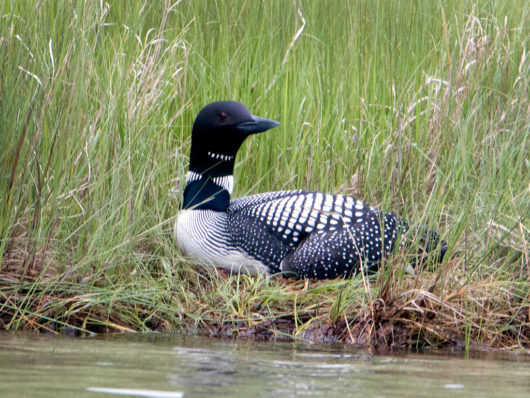 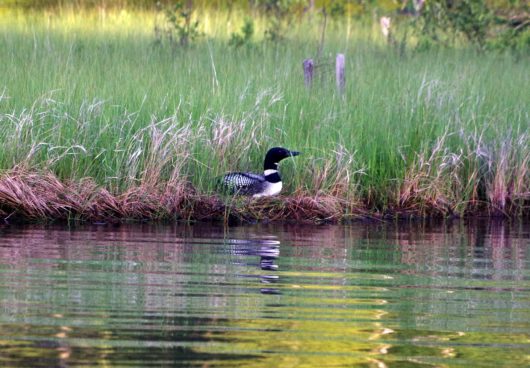 The small island, especially on the west side, is a calm spot on the lake. So, good choice loon. Oh, except we’ve also seen a big snapping turtle laying eggs on the island and worried she’d decide to go after the eggs on one of the rare occasions when the nest was bare. Then, with just those few feet of water between the island and the land, the risk of raccoons, skunks, mink, otters, and fox getting the eggs seems high. In fact, just about everything walking or flying will raid loon nests sometimes, including gulls, ravens, crows, and there’s even some reports of Bald Eagles chowing down. Very worrisome.

But this pair was vigilant. 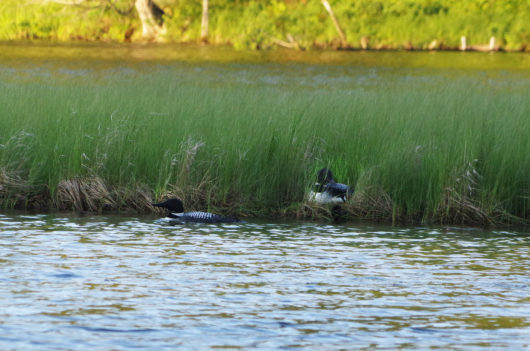 And, we are pretty sure that it was sometime on July 3rd that the chicks hatched and headed out on the water. Well, first on a parent’s back. 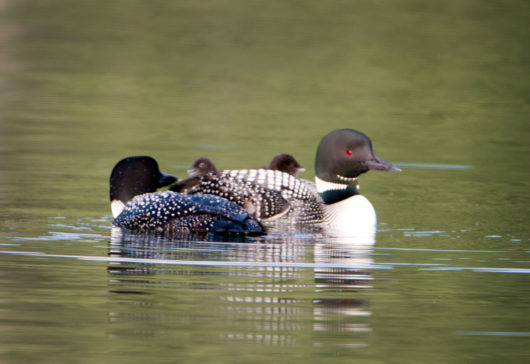 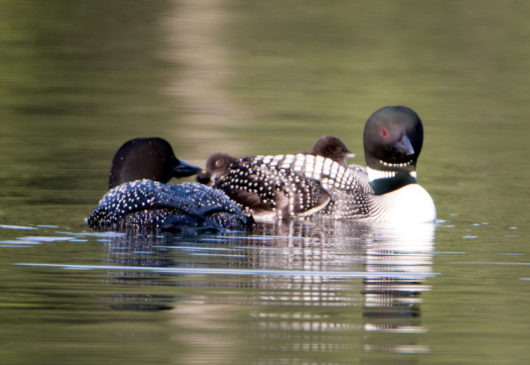 That red-eyed parental stare cuts right to the chase: “These twins can’t dive yet. Do not run them over. If you run them over I know where you live and we’ll be at the end of your dock yodeling all night while your trying to watch Game of Thrones.”

We didn’t applaud their timing. The lake is so busy over Independence Day. But, babies are born when they’re born. 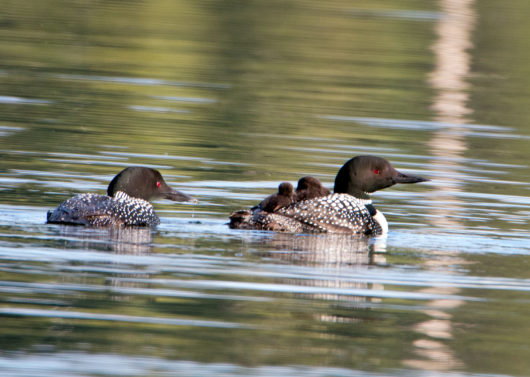 Happily, the twins made it through their first challenging days. Here they are two days later, on July 5th, already looking like their parents are good providers. 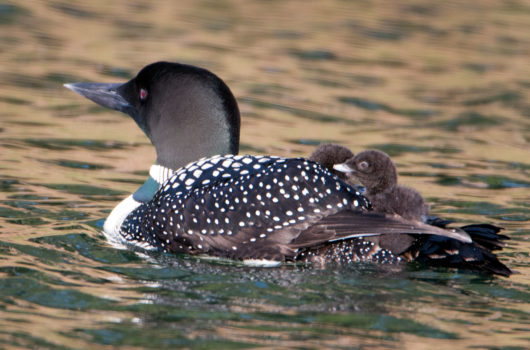 By July 8th, the parents were leaving the chicks bobbing around while they both dove for food.

We can’t protect the twins from the big snappers, or the bald eagles or the giant pike or the rest of the hungry things.  But we can be sure they don’t get whacked by a tuber or run over by a PWC. So, let’s all look out for the little fuzzballs! Hopefully, come October, we’ll find out they’ve gotten a good start on Long Lake and are headed south for the winter. 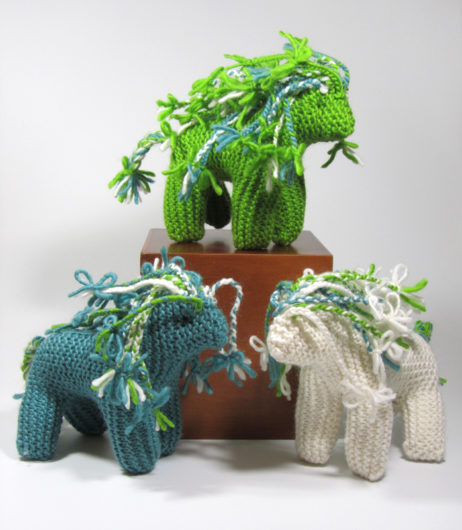 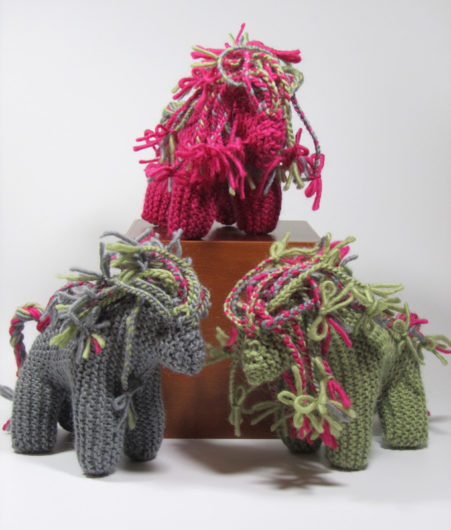 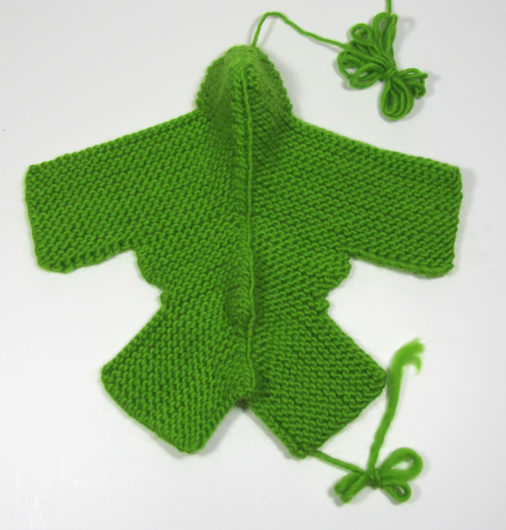 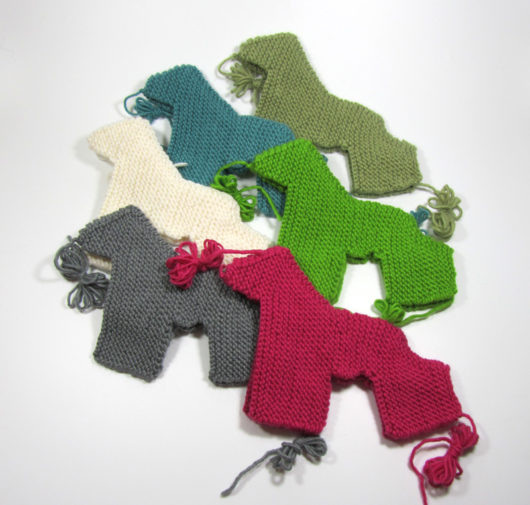 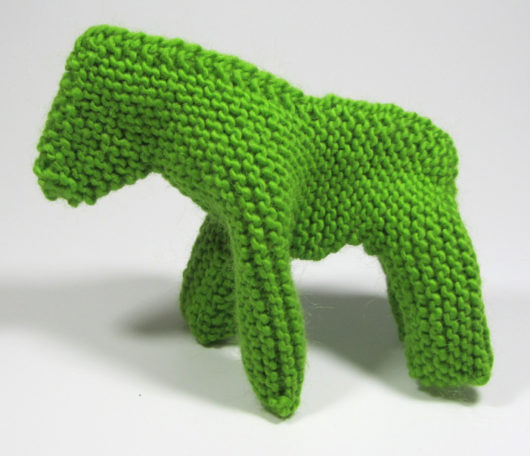 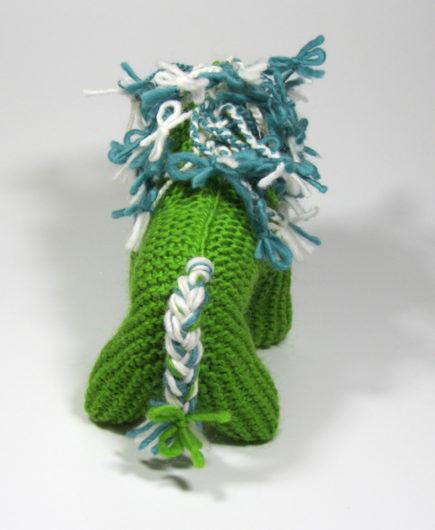 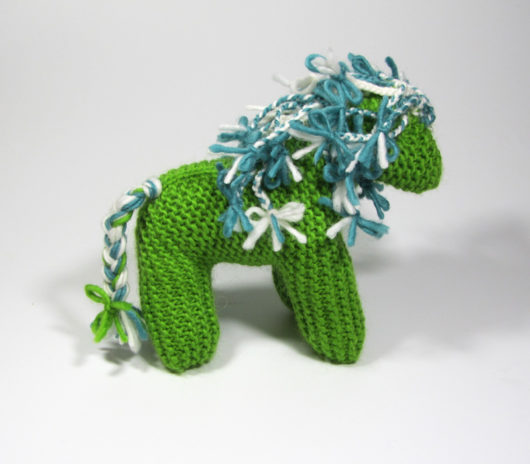 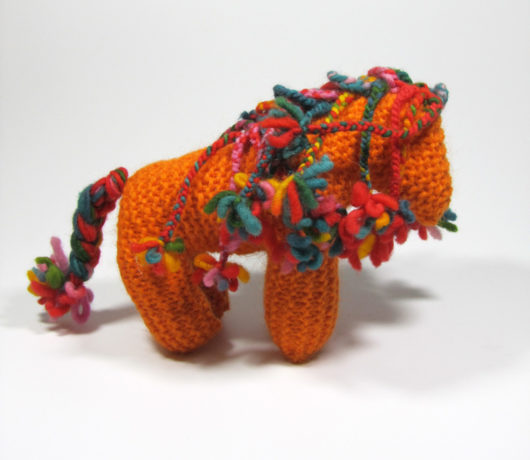 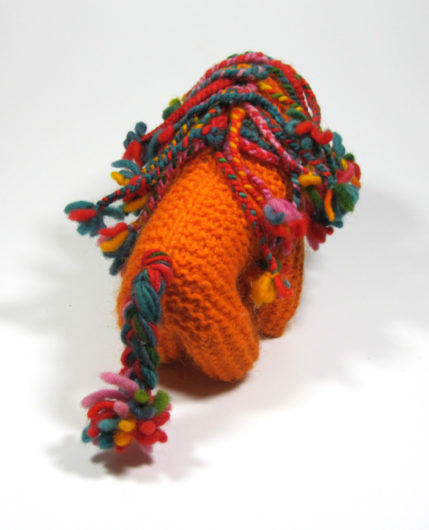 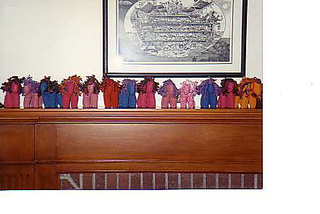 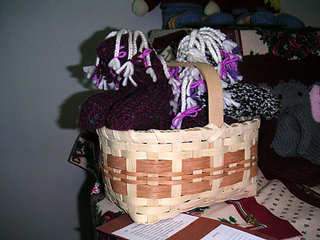 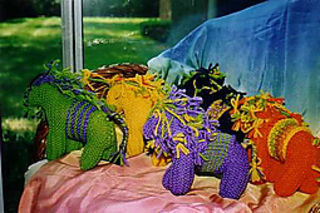