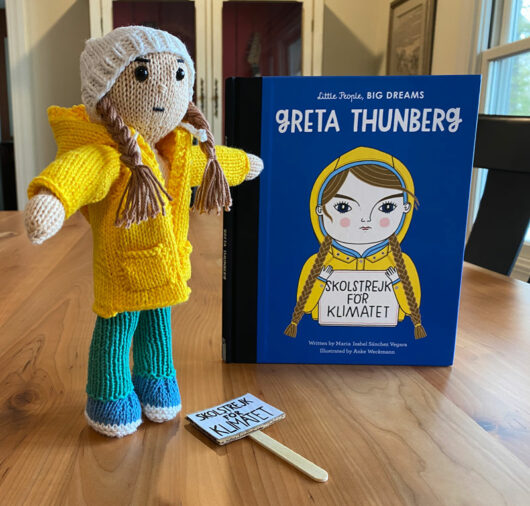 I am seriously tickled about how this worked out. Real-life Greta Tintin Eleonora Ernman Thunberg seems to often look kind of grumpy. Well, why not. She is a very serious young person. She’s trying to raise awareness and prompt actions about the world’s big climate change issues.

I don’t think it trivializes Thunberg’s efforts to knit her. Well, possibly it trivializes those efforts a tad. But this doll will help my granddaughter, who turns 6 soon, to learn more about her work.

I often struggle with faces. But I’m satisfied with how Thunberg’s turned out. I tried to capture the essential character of the original. The eyebrows ended up just angry enough. And not trying to make Thunberg smile was the right choice. 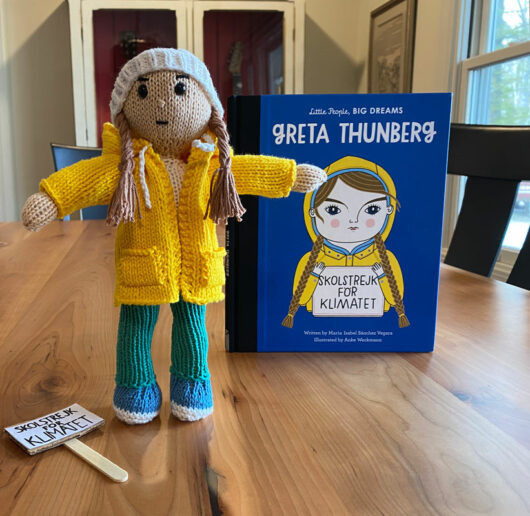 Greta Thunberg is a LoveCrafts freebie, designed by Amanda Berry. She’s part of LoveCrafts’ “Today’s Inspiring Women,” a collection that the company launched on March 8, 2020 for International Women’s Day. I knit Thunberg in Paintbox Yarns Cotton DK and purchased the kit from LoveCrafts. Buying six 50 gram balls of yarn just to have exactly the right colors is a bit obsessive, but DK weight cotton will get used. Watch for some future colorful dishcloth knits. 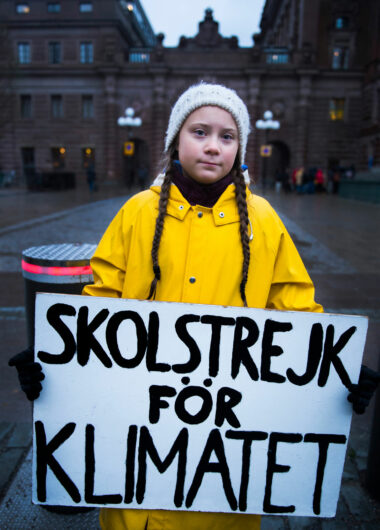 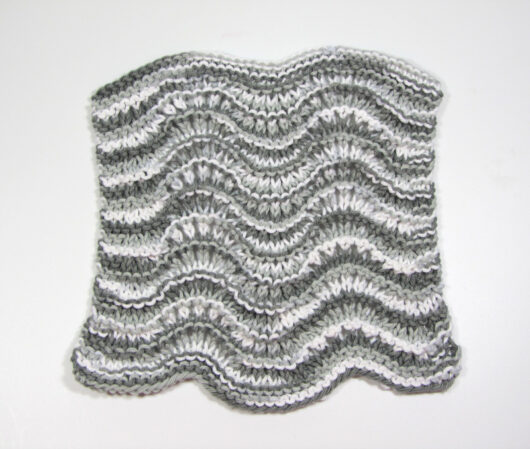 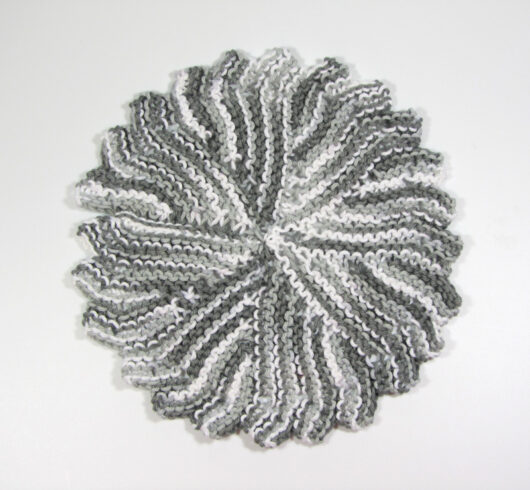 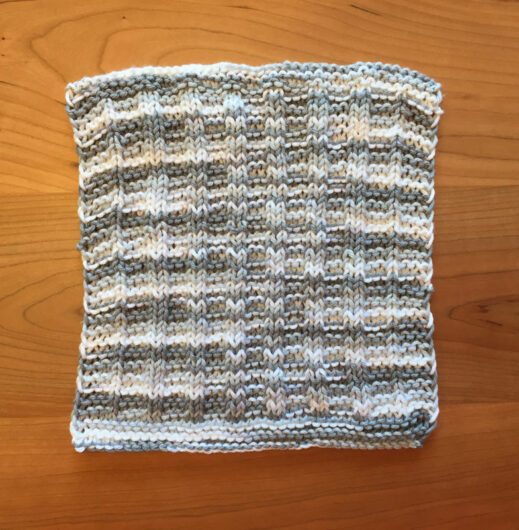 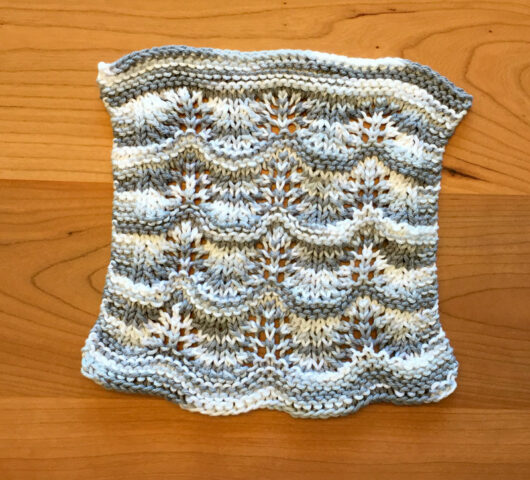 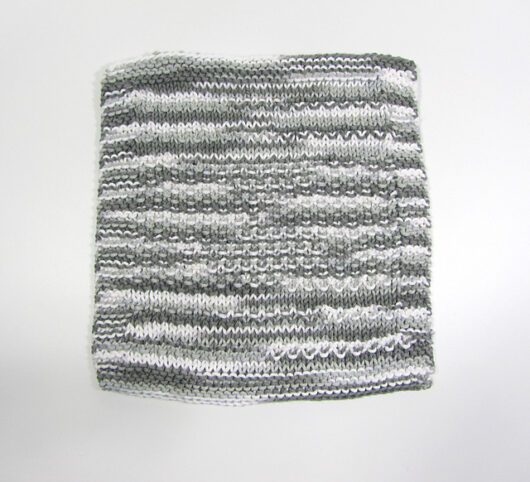 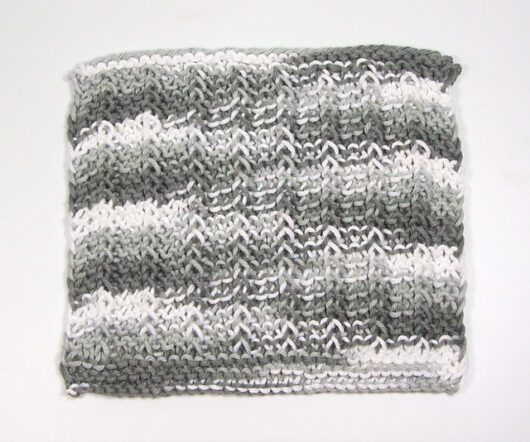 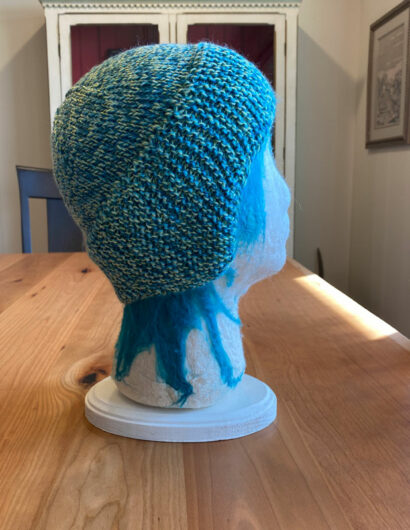 This is Kristine Byrnes’s 1898 Hat. I first put this hat into my queue in…in…possibly closer to 1898 than 2021. Byrnes explains that the pattern is inspired by a photo of a hat pictured in a magazine that was published around 1910. Odd details sometimes trouble me about pattern naming. And that leads me to ask why this isn’t the 1910 Hat. But my brain on fiber fumes is an unruly thing.

This is a great pattern. Truly. It’s double garter stitch over the ears. So this is a very warm hat. The pattern calls for worsted weight. That’s what I used. I knit this one in Stonehedge Fiber Shepherd’s Wool in the Aurora colorway.

Here’s a look at the well-behaved crown decreases. 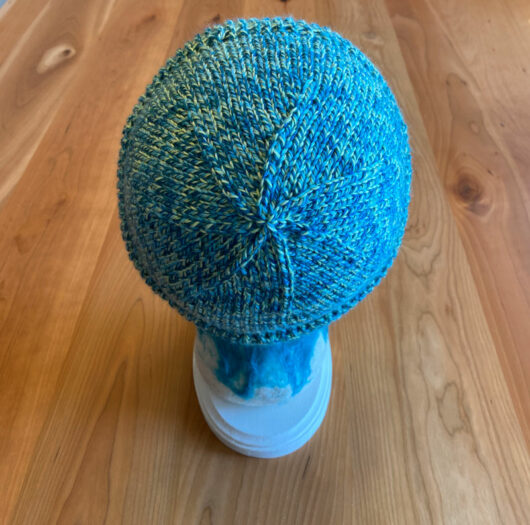 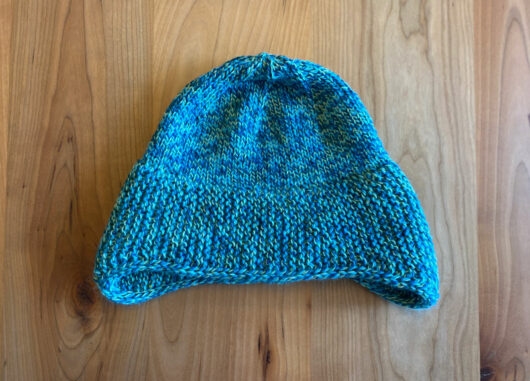 The construction is clever. Before I knit the hat, I assumed that was an applied i-Cord edge at the bottom of the hat. It isn’t. Possibly I should just leave it that and entice you to download this freebie and give it a test drive. But Byrnes provides the reveal in her Ravelry pattern page description. The edges of the headband, that is the part that fits around the head and over the ears, are folded together along a slip stitch seam. Then the edges are knit together as you move from the garter stitch section to working in the round for the stockinette section. So what seems to be i-Cord is actually a slip stitch section running through the flat section of the garter stitch.

I finished my first 1898 and immediately started a second one. 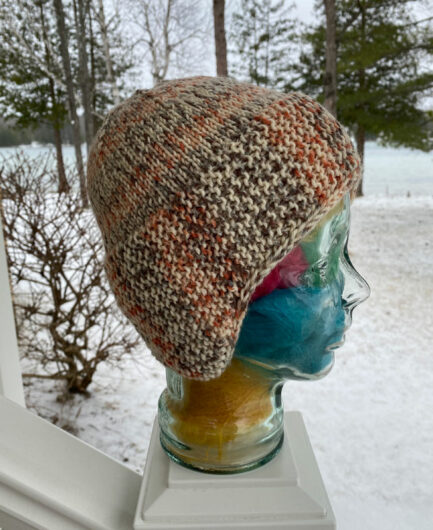 This one I knit in a yarn that’s new to me: Novita 7 Veljesta Solid. Before returning to 1898, my apologies to any Finnish speakers I’ve offended. The yarn name has what I know as an umlaut above the “a” in Veljesta. I have no idea how to type an umlaut on my keyboard. So think “:” over that last “a,” but with the dots cozying up to one another, flipped over sideways. I hope leaving off the umlaut hasn’t said something naughty. Veljesta is an interesting 75% wool/25% nylon mix. I highly recommend the yarn. It has the warmth of wool, with nylon for strength, and was great to work with.

Back to 1898. My first one was a tad small for an adult. FeltHead’s head size is smaller than Glassheads. And I wanted to fiddle and flatten the crown decrease just a tad. So this time I added 2 rows to the ear flaps and 4 rows (or thereabouts) to the front. I ended up picking up 93 stitches–a few more than the pattern directs. Basically, you need to pick up a stitch for every furrow in the garter stitch. I reduced the stitches down to 91 in the first round. Then, in the decrease section, I started out with K11, K2tog across the round. I knit 2 rows after the first 3 decreases, and 1 row after the next 2 decreases, and then I decreased each round. The resultant crown turned out a bit more round than in my first version. 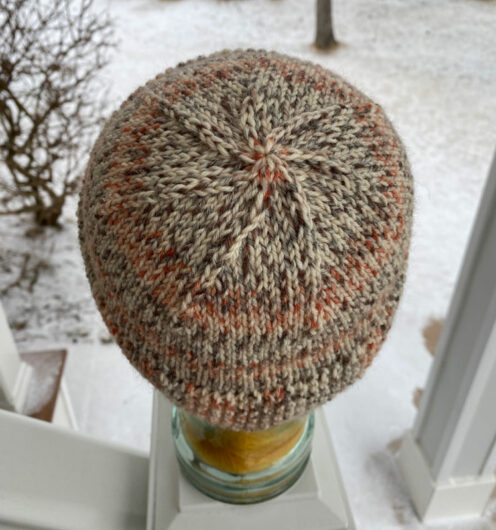 One thing that occured to me (and I’m not the first)? Just stopping after the headband and stitching the edges together makes for a great headband. This past winter…oh, wait, it still seems to be winter in the north country…this winter lots ‘o folks were asking me for headbands.

This next Ravelry classic is really a Purl Soho classic. It’s Garter Earflap Hat. Every newborn I’ve encountered in the last several years has almost gotten one of these hats. I finally knit one. 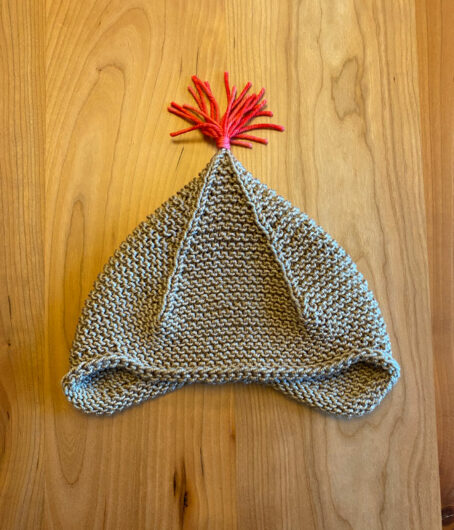 I had one ancient skein of Nautika, an Aran-weight by Knit One, Crochet Too. The pattern calls for Aran weight. So I was off to the races. More than 11,000 Ravelers have project pages on the site with their version of this cutie. Except for the Pixie top, it’s got a bit of 1898 going. Obviously the earflaps are much less exaggerated.

The pattern is easy, but oddly written–especially in the short row sections. After you set the markers and work the first set of short rows, you are wrapping the stitch after the divide/space in your row. I’m not sure why the directions on that are a bit garbled.

There are also quite a few questions that arise around the double decrease directions. What I did, which worked well, was to put a removable marker at the first double decreases. Then vertical rows of stockinette make it clear where you work the decrease: slip the stitch before the vertical row and the vertical row stitch, knit the next stitch, then pass the two slipped stitches over the knit stitch.

It’s such a sweet thing. And I think the bright topper was a great finish. 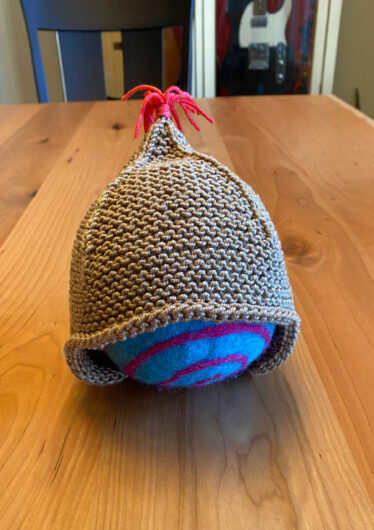 Garter Earflap Hat is sized from infant to large adult. If there are large adults out there wearing this hat I don’t think they’ve made their way into Montmorency County, Michigan yet. But babies? Babies pretty much let you put anything on their heads especially if it doesn’t have chin ties. They will look so cute in this one!