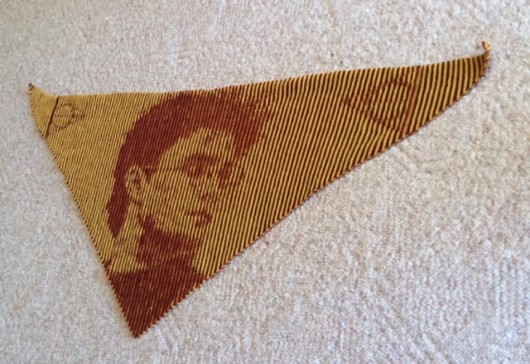 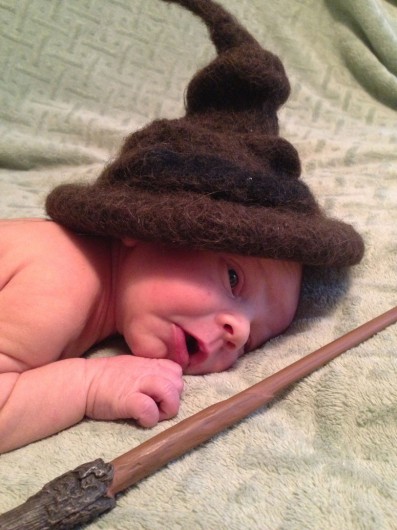 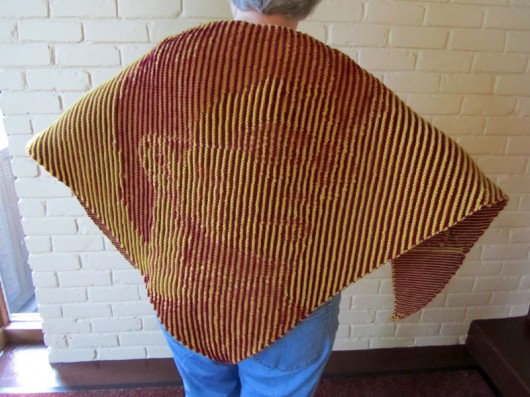 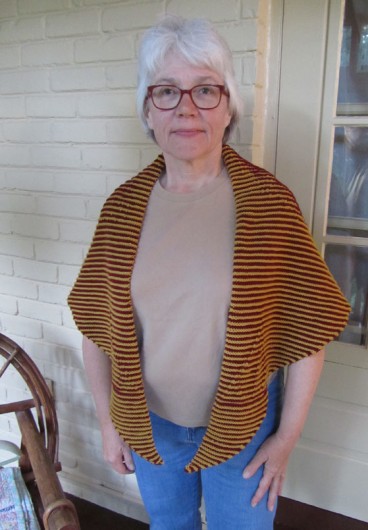 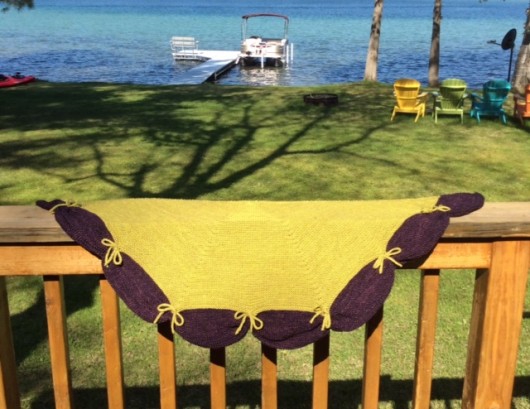 This is Knitwise Design‘s newest pattern, Simply Sweet Shawl. I knit mine in one of the suggested yarns: String Theory Yarn’s Caper Sock. And, yes, that’s Long Lake in the background.

This is a wonderfully rhythmic knit. It’s almost all garter stitch, with properly placed increases that help keep the shawl securely in place on your shoulders. The scalloped edge is an interesting technique. I won’t spill the beans, but as Linda Courtney puts it, there’s “no tricky knitting required.” Basically, to borrow an Elizabeth Zimmermann term, it’s an “afterthought” scallop.

I decided to knit mine in two colors, and keep the I-Cord bows the same color as the body of the shawl. 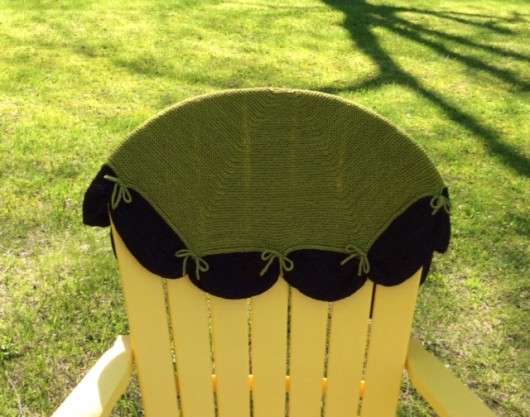 It’s total knitter’s choice on whether you use two or three colors. Here’s Linda’s 3-color version: 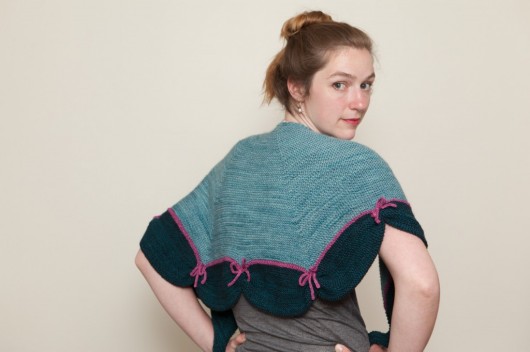 This is one pattern name that suits. Simply sweet.

It’s great yarn, though. My colorways are citron, a lively yellow green,  and black tulip, a deep purple. 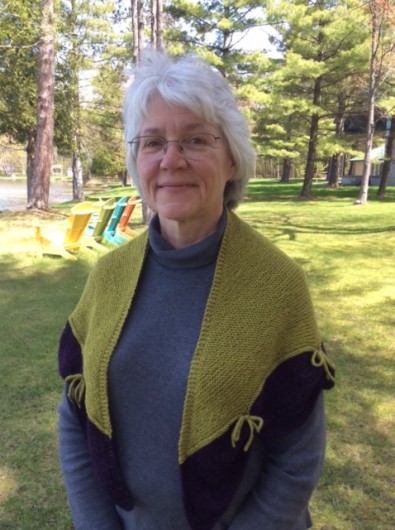 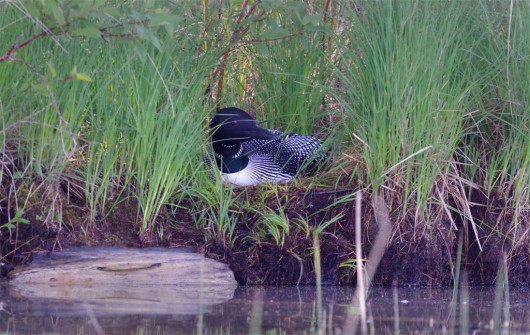 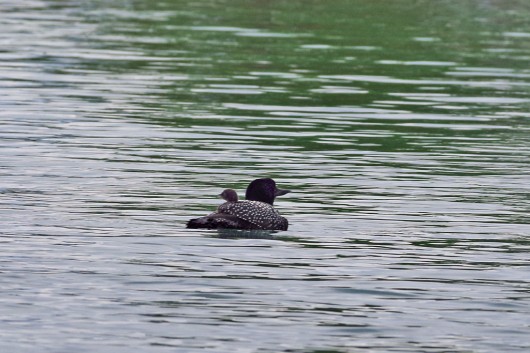 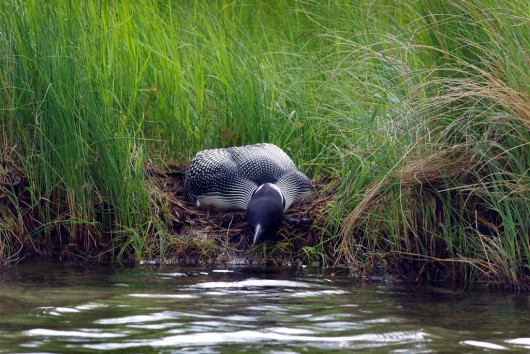 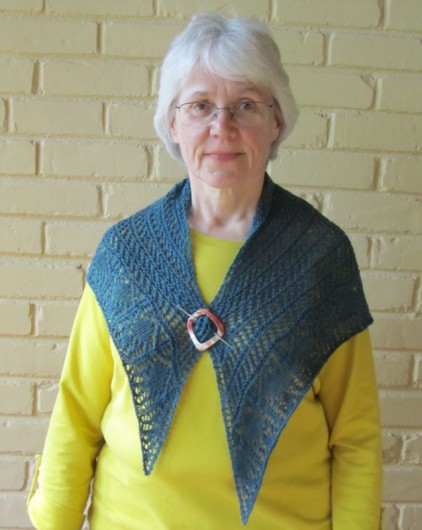 This is Marissa Hernandez’s Glam Shells. The free pattern is available on Ravelry, in English, Spanish, French, German and Russian. It knits up quickly and easily even for the lace knitting impaired (like me). More than 700 Ravelers have knit it and posted their finished project on their project pages.

I decided to take out a mortgage and buy a skein, one skein, of Swans Island. I choose the teal shade. You probably figure that my camera made it look blue. Actually, no.The ball band warns not to use wooden needles because dye will bleed from the yarn as you work and stain the needles. They weren’t kidding about that. So much dye bled while I worked that I had to keep wiping off my Addi nickel-plates to keep the stitches moving easily. My hands were stained blue. And it was not easily washed off the skin. In more than 50 years of knitting, I’ve never seen yarn bleed like this while I worked.

I can only imagine that the teal color was a mix of dyes that included indigo. Anyway, it included something blue. I soaked my Glam Shells for about 10 minutes in cool water and unscented Soak. The water turned a deep, deep blue. I cleared the basin and soaked it a second time and still the water was very blue.

The shawl looks great. It feels wonderfully soft. It’s very lightweight. But it isn’t teal. And all the soft plastic stitch markers I used are stained with dye. 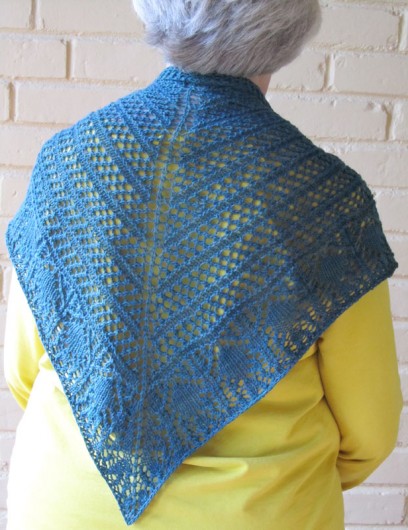 Mallard mom was moving along at a good clip on the eastern shore of Long Lake, fairly close to shore. Her ten teeny ducklings were having a hard time keeping up. Every once in awhile they needed to do that frantic scooting-across-the-water-thing that ducks can do. It’s that move where they create a great commotion and put themselves in overdrive for a short distance. One or two ducklings would start and in short order the rest would join in.

You think mallard mom would slow up because putting on such a clownish display can’t help but draw the attention of those who prey on these little fuzz balls. But this afternoon it was a good day for ducklings. Ducklings, 10. Bald Eagles and snapping turtles,  0.