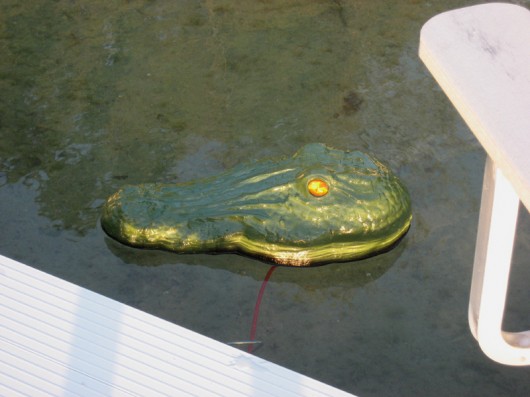 The enemy is Canada Geese. Actually, they are not the enemy. Their mass quantity of slimy droppings are the enemy. Geese look so impressive, floating around on the lake. Then you hear them honk and you wish you hadn’t. Their gaggle of goslings look so cute bunched up and swimming between mom and dad. One, two, three, four, five, six, seven, eight, nine, ten. Wow. Where are those hungry pike and snapping turtles anyway? OK, just kidding. So they swim along, heads and necks all bobbing in unison looking kind of goofy, kind of cute. They come ashore to eat grass. An adult (sometimes two) stands guard, eating a bit but mostly watching. Meanwhile, their rapidly growing offspring stuff their beaks so fast you have to kind of marvel. Then you remember picking up about 100 piles of goose dropping and you wonder why Bailey, the neighbor’s dog, is falling down on the job.

Headley is a gator head with sparkling jewel eyes that reflect sunlight. He is guaranteed to keep water fowl away. He bobs around in the waves, even squeaks occasionally as his styrofoam head scrapes the bungee cord. But, alas poor Headley, the gator who comes with an overpriced tag, doesn’t do a bit of good. Not a bit. Not even at first. You would think at least at first it would have worked.  Almost the first night Headley was in the water, a pair of American Black Ducks decided to spend the night on the dock. I guess they wanted to keep him company and welcome the new guy to the neighborhood. Supposedly gators eat young water fowl, somewhere, and the breed memory will take over and your property will be fowl/foul free. Not so. Not in Michigan anyway. Canada Geese swim right by those sparkling jewel eyes on their way to breakfast on the lake house lawn. And lunch. Until I come running out with my broom. 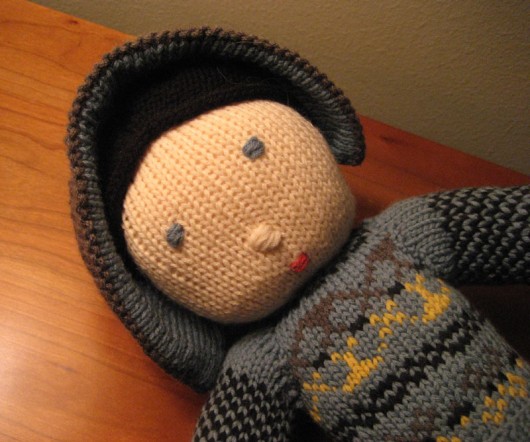 This is my face to the Ravelry world. She is my Ravatar. Whenever I post on Rav, this is who other knitters see. Some knitters show their arm tattooed with a wound ball of yarn. Some show a beautiful piece of lace work. A plate of cookies. Themselves astride their Harley. Or a cat. Some show their real faces. But this is me. A doll I knitted many years ago, complete with knitted hearts on her underwear, a knitted wig done up with a bun in the back and a dress of my own design. The original pattern was a severe looking doll knitted in dark colors.  It was a Fall, 1980 Better Homes and Gardens Magazine pattern called Grand-Mere Knitted Doll. The first time I knitted her I followed the pattern and she turned out very somber.   Next time I knitted this version of her, for me. 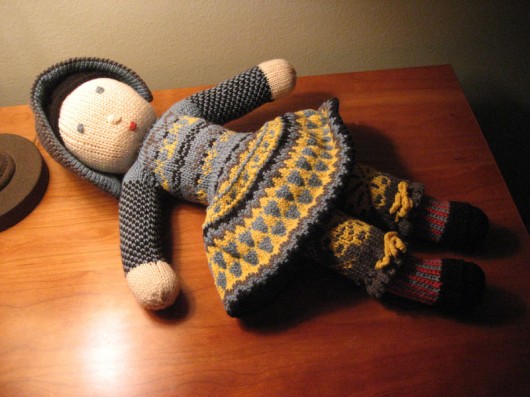 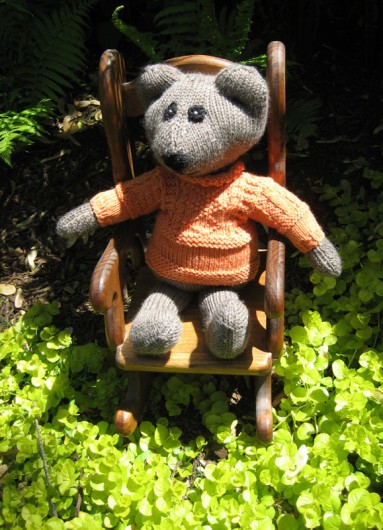 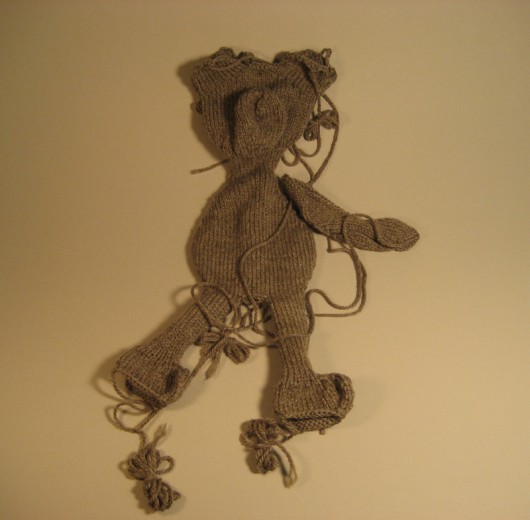 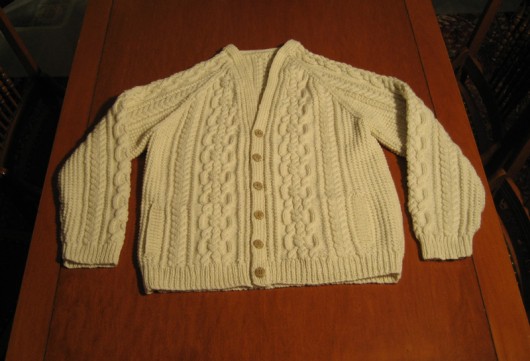 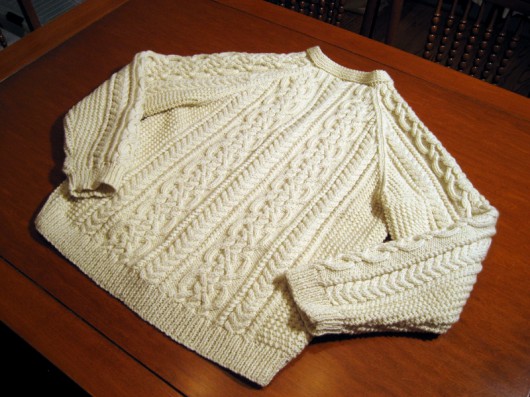 It has been a long time to “FO Day.” This now-Finished Object was cast on February 27, 2010. It was completed May 12, 2010.  Before being cast on, it was  about 1750 yards of, well, basically very nice string that used to grow on sheep.  It seems like it should be sheeps, and I’m sure it was more than one of those critters who “donated” their fleece to make this sweater, but sheep.  This sweater used to grow on sheep.  Mixing animal references now, this was a bear to knit.  Some knitters can teach their hands to remember intricate patterns.  Not me.  My hands are mostly stupid and need constant guidance from my head.

The pattern is Paton’s Dad’s Cardigan.  It is a free pattern with some unfortunate goofs in it just to keep us knitters on our toes.  Goofs in patterns are cod liver oil for knitters: it’s what makes us strong so usually we swallow hard and just get on with it.   I’ve posted my corrections here on Ravelry and emailed Paton’s hoping I can tempt them to fix the errors in the cabling abbreviations. Forget the errors.  They were momentary distractions.  OK, they were kind of big distractions and then I made my peace with them.   Another knitter has turned string into a garment to keep another brother warm. “O frabjous day! Callooh! Callay!” He likes it a lot.  She “chortled in his joy.” 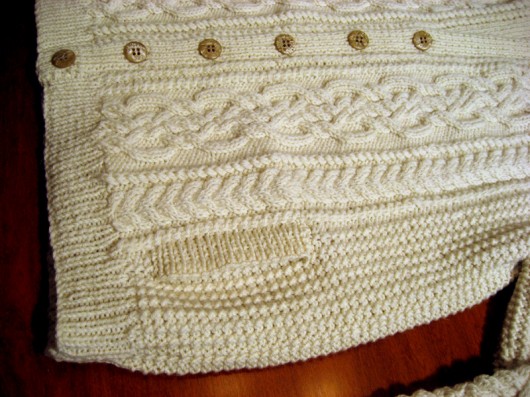 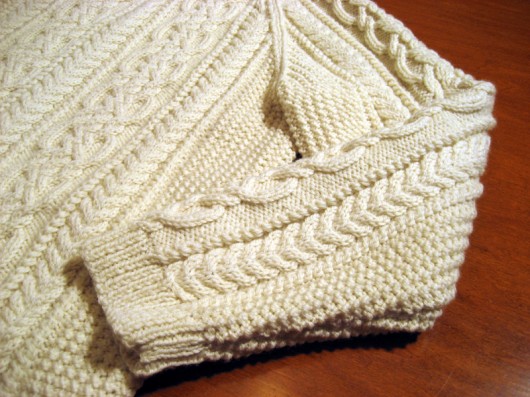 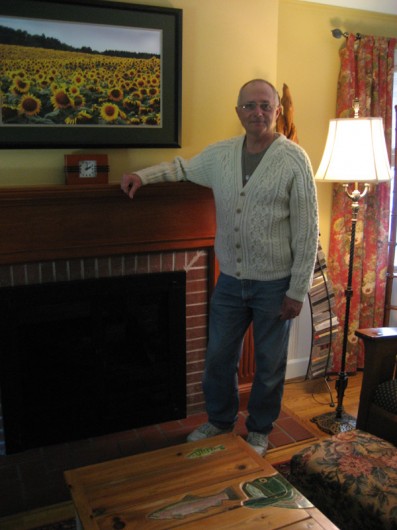 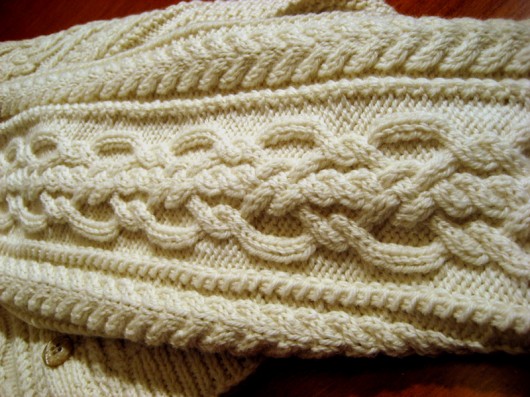 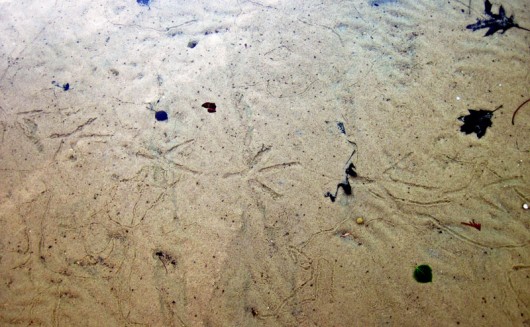 A Great Blue Heron, for sure.  One way to  tell a heron track is to check if  two of its three front toes are closer together. If you look closely, you will also see the imprint of its talons. We regularly see these ancient looking birds patiently fishing in the shallows. They move with deliberate speed. Which means they move slowly. This guy must have strolled along the edge of the lake, in Long Lake’s  most clear water, looking for tasty tidbits.

A Great Blue Heron moves in the shallows, often at dawn or dusk. It isn’t a fussy eater. It will spear a fish, toad, or frog with its long bill and then  swallow its food whole. The Great Blue is a strong flyer, with a deep wingbeat. In flight, look for his long legs trailing behind and for his long neck to be bent back so his head is over his body. Click here to listen to his charming call.