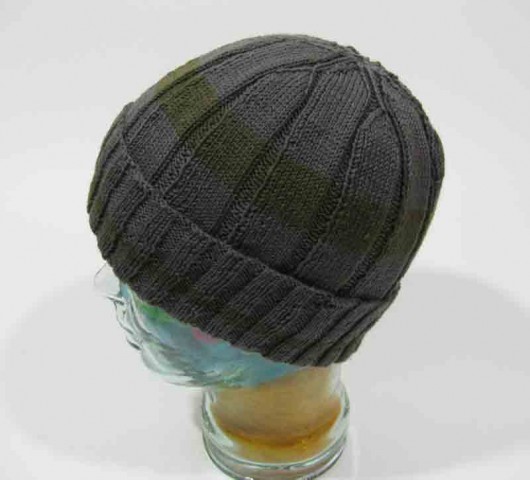 Knitted here in two drab colors to complement my son’s drably colored winter coat during a winter of drab dull weather. A perfect combination. But I’m happy to knit it. I still want to steam it some. This 10% nylon, 90% merino Aussie Oasis sock yarn is a bit uneven and steaming will improve the appearance of the hat.

VerMeer’s pattern is available as a Ravelry download. For my “investment”–the price of the pattern is now 2.99 US– this will be the 4th Bayfront I’ve gifted.

The ribbing can get a bit tedious. But the interesting crown decreases keep a knitter motivated to move forward. 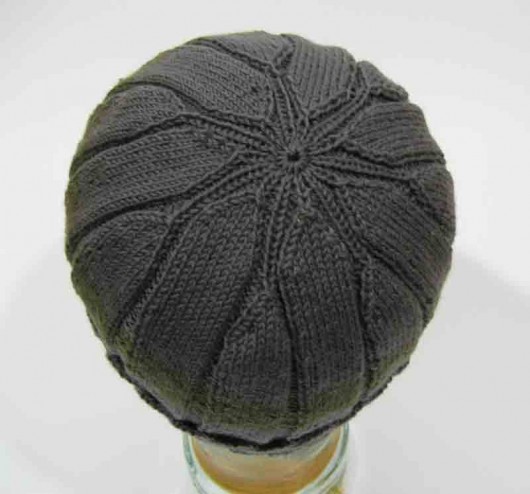 Here’s a slideshow recap of my earlier Bayfronts: 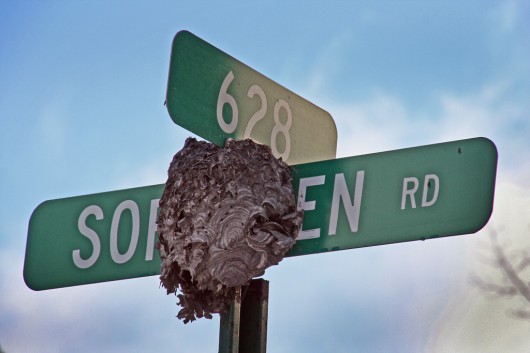 Every living thing finds a way to make its house a home, but this group of hornets chose an eccentric building site. They constructed their home at the intersection of Sorenson Road and County Road 628. Literally.

I’m pretty sure this is a bald-faced hornet nest. The nest is basically paper. The queen’s daughter-workers chew wood fiber, mix it with the starch in their spit, and that’s how the nest is formed. One hornet mouthful at a time.

If you don’t mess with baldfaced hornets, they don’t mess with you. But if you do manage to disturb them, apparently there is almost no end to the number of times one of these hornets can sting you. And there can be several hundred hornets that call one nest a home.

The hornets freeze and die as cold temperatures move in. Nests are not re-used. The new queens hibernate outside the nest, waiting for the warmer weather to return. You can read more about Dolichovespula Maculata here.

If any readers are wasp/hornet knowledgeable, please let me know if you think I’ve identified this creature wrong. It is some other form of hornet?  Or maybe a paper wasp? The shape of the nest and the swirl construction made me decide otherwise. 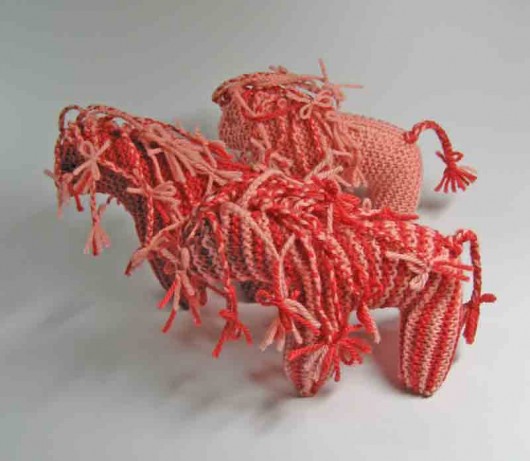 A conservative estimate would be that I’ve knit about 10 dozen of these guys in the last 22 years. My son’s Waldorf pre-school gave out the pattern when he was 4. I knit gobs of them for a Waldorf holiday fair. Then he moved on to an elementary school that had a fall fun fair every year. More gobs. Kid birthday parties. More were knitted. I’ve gifted half a dozen at a time, in assorted colors and manes.

My Little Ponies were the rage back then. They were odd brightly colored plastic ponies with hairdos and costumes. Somehow I was convinced these were more wholesome. Possibly that’s a lot of hooey and the truth is I just like to knit these little guys.

Because of the name of this pattern, with its hand-written title, I figured the likely source of the pattern was the Acorn Hill Waldorf School in Silver Springs, Maryland. Great news! In May of 2017, the school’s administrator gave me written permission to publish my version of the pattern as a Ravelry freebie, available here. I repaired a few hiccups in the original and put my stamp on it. I revamped the pattern with updated detailed instructions and lots of photos to help keep knitters on track.

I am so happy to be able to play a small role in helping assure that this sweet pattern will continue to be knitted. Thanks so much Acorn Hill! 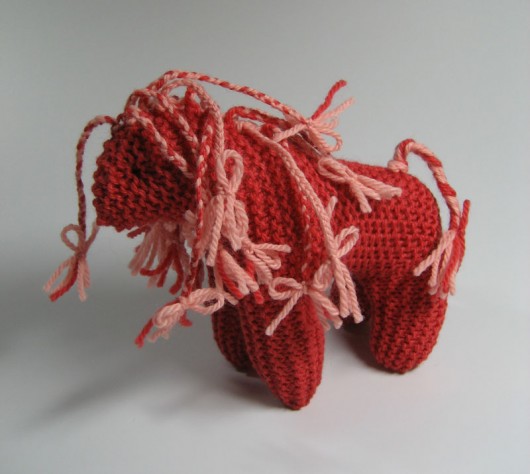 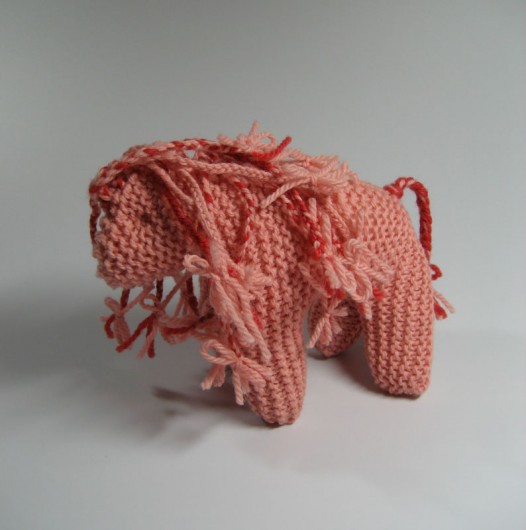 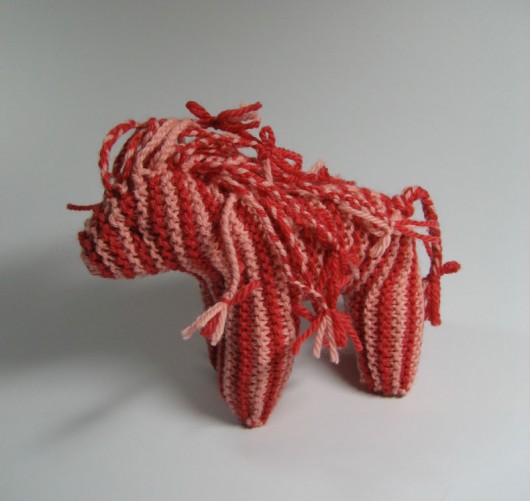 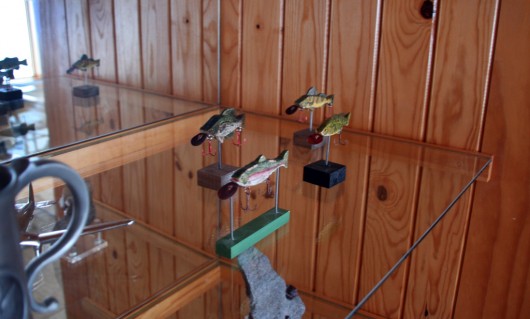 My brother Norb is an avid fisherman and a wonderful woodworker. A few weeks ago I received a surprise package from him: this set of hand-painted fishing lures. He salvages hooks and parts from old lures and carves and paints new bodies. Of course, they are way too cool to load up with nightcrawlers and dangle on the end of a fishing line. We have them displayed at the lake house. In case you plan on riding in the snow there are some great scratchers for a snow mobile here.

It’s been a warm winter so far. Not much snow. The ice is thick enough to walk on. But we are still not feeling comfortable hauling out the ice shanty. That hasn’t stopped a few of the foolhardies from racing around in their snowmobiles, though. So far, fortunately none have fallen through the ice. Falling through the ice on a snowmobile–I don’t think there’s much chance of a happy ending to that one.  Take time to watch this video, featuring a top Canadian thermal physiologist (Gordon Giesbrecht), to learn how to possibly survive a fall through the ice, as well as the proper way to perform an ice rescue.

To end this on a more peaceful note.  Here’s our frozen lake.  Long Lake, Hillman Michigan. 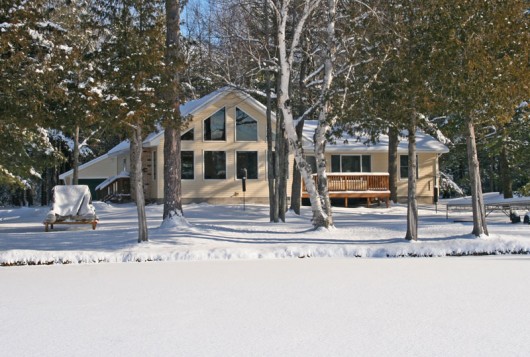 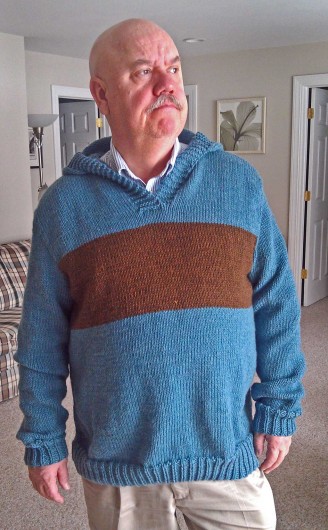 Steve’s hoodie is really Bruce Weinstein‘s “Hooded Sweatshirt” from his book Knits Men Want: The 10 Rules Every Woman Should Know Before Knitting for a Man. For me, Weinstein’s 10 Rules manage to be insulting to both men and to women. Stereotypes don’t move “the conversation” much forward. But his patterns, including this one, are quite nice.

I was anxious to post, so this is the unsteamed/unblocked version. And I am going to be re-knitting the hood.  It suffers from a few flaws I don’t want Steve to have to deal with. The pattern calls for a very simple hood. In this size, knit 14 inches, divide the stitches, and do a three-needle bind off.  That would create a hood that’s fit for a gnome. Way too cute for a grown man. Speaking about avoiding stereotypes. I’ll try that again, way too cute for Steve’s taste (or mine).

So, I started decreasing stitches on either side of the center two stitches a bit beyond half way up the hood. That helped a lot with the pointiness, though it’s still got a point (just way smaller). But the hood is also very wide at the neck. Lots of room for the chill winds that blow. I don’t know how to fix that, but I believe it would be helped by making a tighter fit. We all have big heads in this household, but 14 inches just seems way too loose. Maybe a tighter fit would tug the hood a bit at the neck so there wouldn’t be a fold of extra fabric that makes it look so monk-like. I’ll likely reknit the top half of the hood.

But first I have to lick my wounds for a bit. I know that, in knitting, not everything turns out as planned.

I’m also smarting from the fact that the sleeves are too long. I suppose it’s too much to wonder if maybe Steve will grow into them. I measured sleeve length from a sweatshirt with a fit Steve likes and added a half inch to the length the pattern called for. The only thing I can figure is that the armpits are lower in this pattern than in the sweatshirt I measured.

All that whining aside, it came out not half bad. Steve looks good in it (as long as he doesn’t try to wear the hood). And in cold weather even an ill-fitting hood is still better than going without. 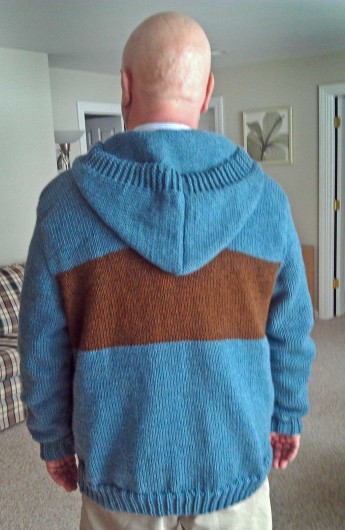 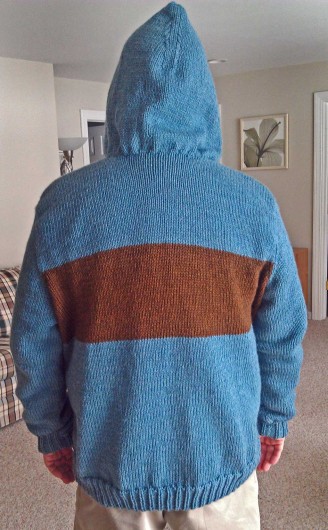