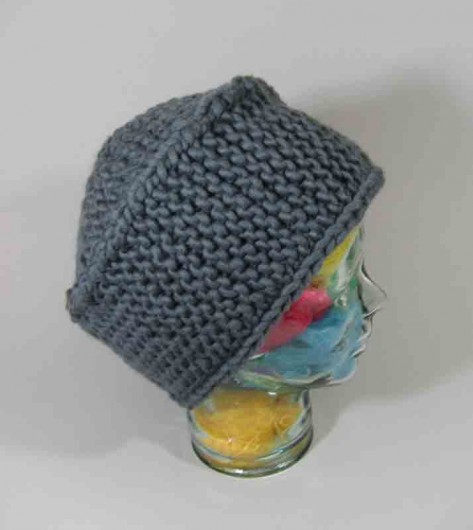 This is Elizabeth Zimmermann’s Pillbox Hat. Not exactly Jackie Kennedy stuff, but sort of “…in the style of.” The pattern is included in Schoolhouse Press’s “Knit One, Knit All,” a posthumously published book of EZ’s garter stitch designs. Pillbox is supposed to be knit in Super Bulky Sheepsdown at 3 stitches to the inch. Classic Elite’s now discontinued Waterspun Weekend should have been a good substitute.

Well, I am a major pumpkin head and even my head was too small for this hat. Glass Head could have been wearing three hats under her Pillbox and had a mess of raccoons in there too when this photo was taken and you’d not have known it.

I finished knitting this hat about three years ago. No head has yet appeared to claim it.

I was felting some slippers in the washing machine last week when it dawned on me that felting Pillbox could yield something interesting. But I wasn’t sure what.

Check out my new felted bowl. 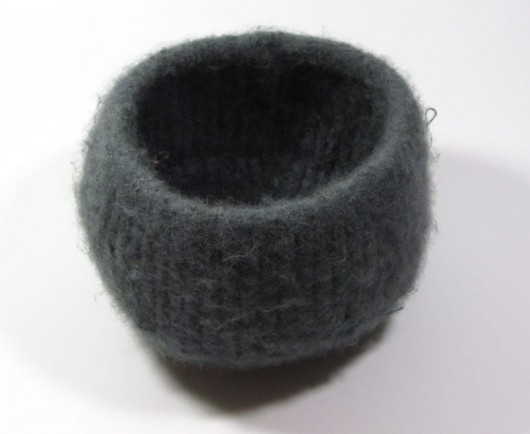 I’m quite tickled with it actually. I haven’t figured out exactly what I’ll keep in it. If you have suggestions I’d love to hear them. 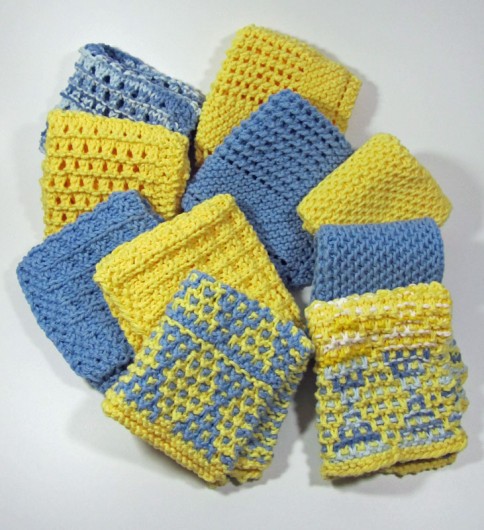 Dishcloths are not every knitters cup of tea. Some see them as a waste of stitches, not to mention yarn. I see dishcloths as instant gratification and a chance to try out a new stitch pattern. The end result is something useful that won’t be a bacteria incubator if you wash it frequently enough.

No dishcloths will look pristine after the first go-round in the washer and dryer. But pristine is not what it’s about.

The entire set of 10 is for my brother Tom, who mentioned that he missed our mom’s dishcloths. She kept us supplied with them, always in the pattern now known as “Grandmother’s Favorite” dishcloth. I believe that eons ago that pattern was printed inside a Sugar ‘n Cream ballband. Now it’s printed all over the internet. It’s worked on the diagonal, with an eyelet border formed from yarn overs. None of these are Grandmother’s Favorite. That pattern was my mom’s specialty and I must leave that pattern to her. (And to the knitters supplying Hillman’s Brush Creek Mill gift shop, where they are available in abundance.)

This is Jana Trent’s eLoomanator’s Diagonal Knit Dishcloth, available free on Ravelry. It has excellent texture through the middle section where it’s needed most. 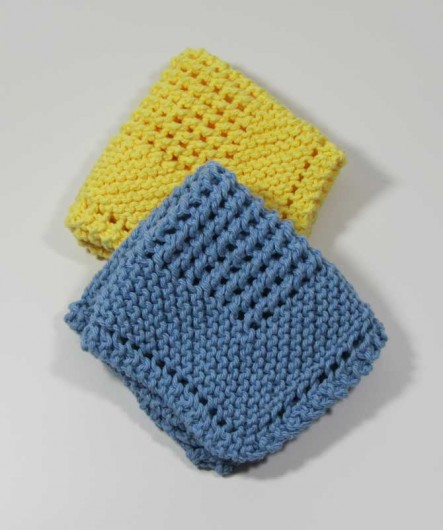 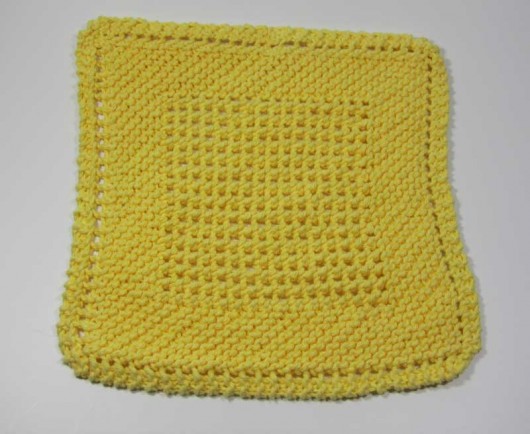 This next one is Maggie Radcliffe’s Chinese Waves Dishcloth, another time-tested pattern available free on Ravelry. I don’t know what this great textured stitch has to do with China, but the waves part sort of makes sense. 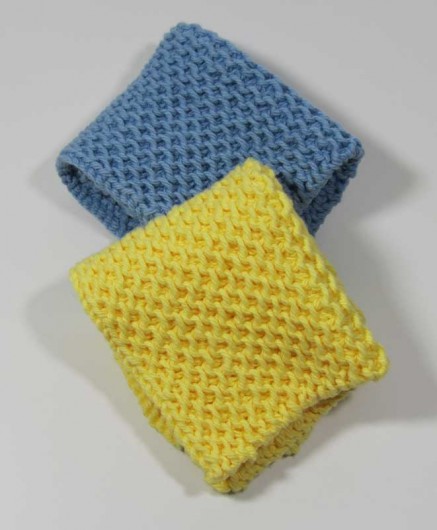 Chinese Waves doesn’t have the tidiest edges. And without a very steady tension on the slipped stitches the waves will break every once in awhile. But what the heck, it’s a dishcloth. It’s going to be used to muck around in all that crud we wash off our dinner plates. 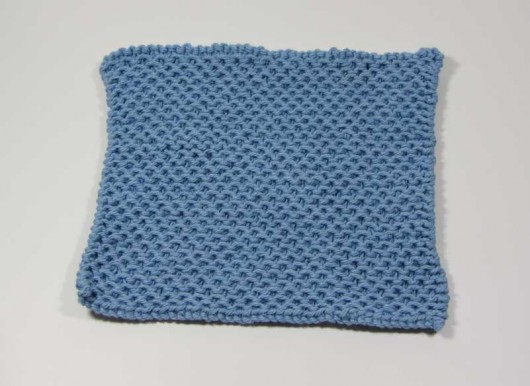 These two are Anne Mancine’s Spa Day Facecloth. The pattern is free, as with all the cloths I knit in this set. 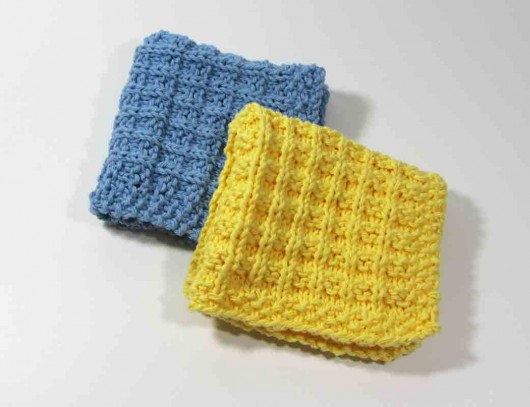 “Spa Day Facecloth” makes it sound so fancy. But this reversible stitch pattern will work just as hard as the rest for mucking around in the dinner detritus.  Here’s a closer look. 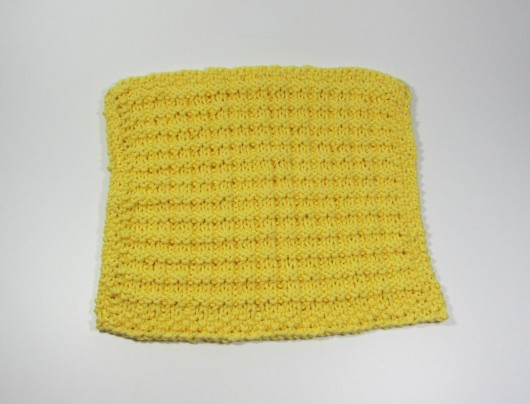 This next set is Nina Bank’s Krissy’s Dishcloth. Only 14 Ravelers have knit this pattern and posted it on Ravelry. But it’s one that merits a second look if you’ve passed it by for some reason. 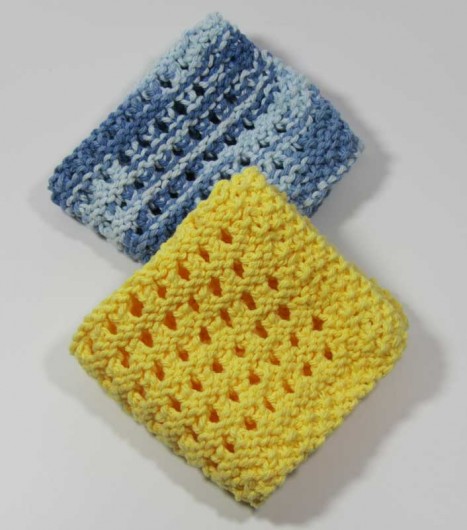 It’s the only one I knit in Lily’s “Ombre” shades. This one is “Faded Denim.” 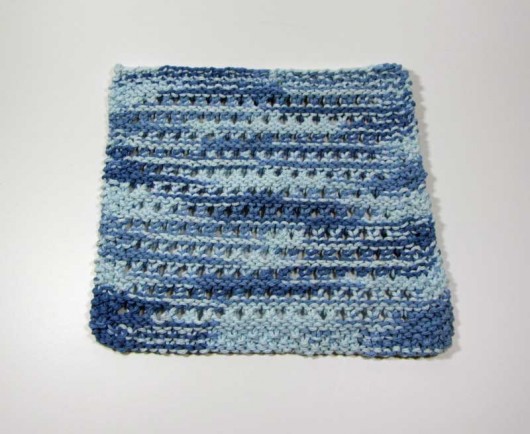 I don’t think this next dishcloth is necessarily the star of the set. But the slip-stitch work was definitely the most fun to knit. It is Linoleum Dishcloth, by Kay Gardiner of Mason-Dixon Knitting blog fame. 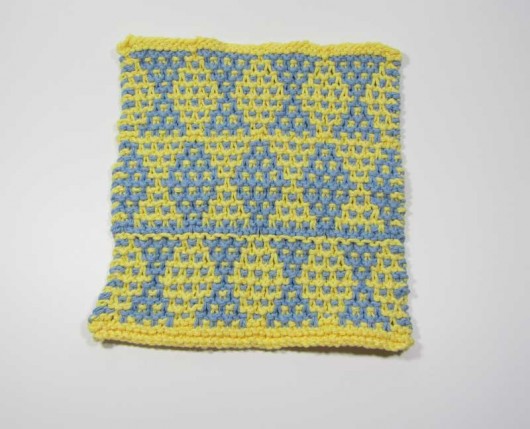 I don’t know what that extra line of blue is doing in there. The pattern calls for a tri-color treatment and my Sugar ‘n Cream was pretty much creamed by this point. So I tried for a 2-color. It went a bit rogue.

Here’s its mate, also not a wildly wonderful aesthetic success. Apparently using up the remaining oddments of two shades of ombre and one solid shade aren’t the best way to go on this pattern. If you look closely, though, you’ll see I ditched that extra line of solid color between the hourglass rows. 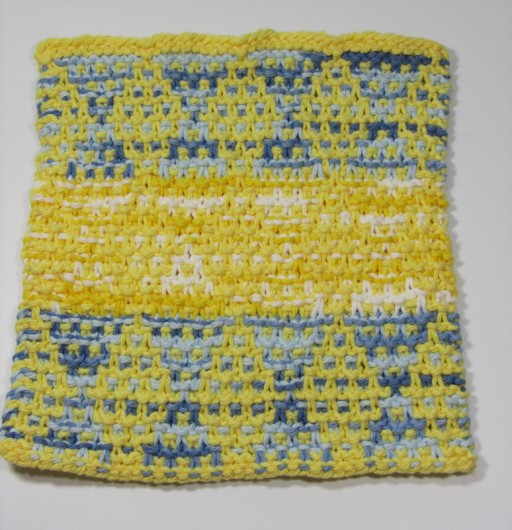 Next time, my linoleum is going to get a three-color solid treatment. It will have a great retro look. But these will get the jobs done. And that’s mostly the point of dishcloth knitting. 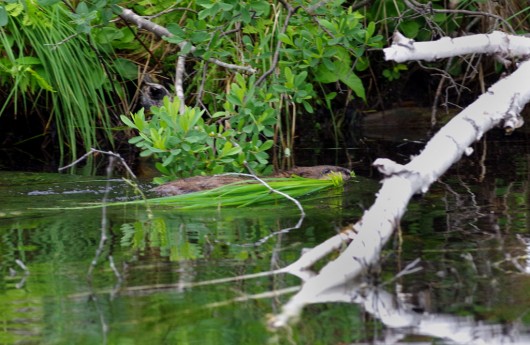 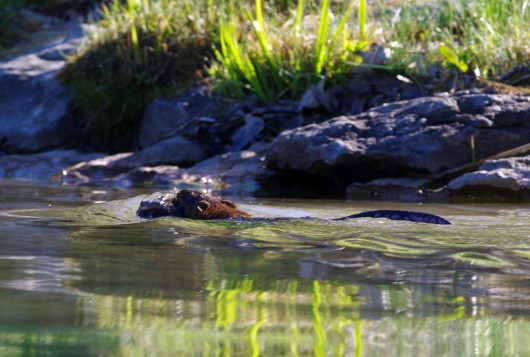 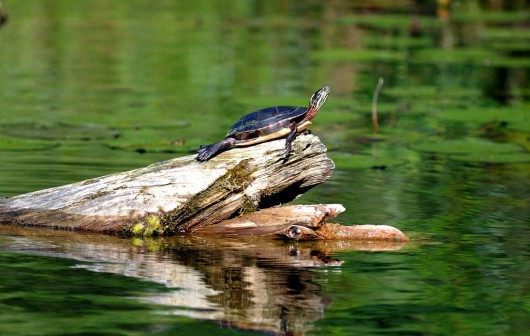 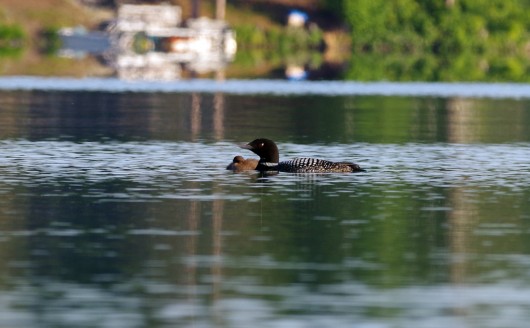 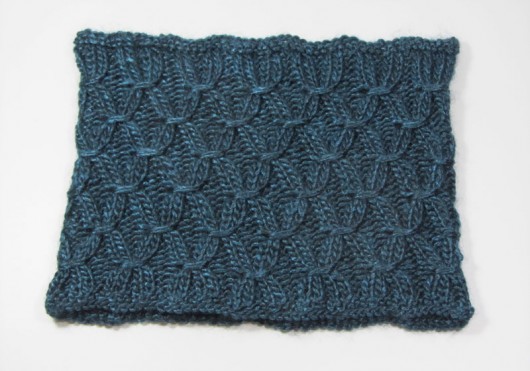 This is Allison Goldthorpe’s Ziyal, a free cowl pattern available on Ravelry. I knit mine in one of my all-time least favorite yarns to work with, Berroco Lustra. I had enough left over from my Walkover Wrap to complete this cowl. Giving Lustra the bit of credit it deserves, if you get through your knitting and soak it in a wool wash afterward, the garment ends up with a great comfy feel and good drape.

Ziyal uses what Goldthorpe calls a smocking stitch. The stitch is very easy to work and Goldthorpe’s blog has an excellent photo tutorial to help guide knitters. I know it as bowtie stitch. The pattern staggers the smocking by moving the end-of-round marker 4 stitches after each set of rounds that make up the pattern repeat. Clever. 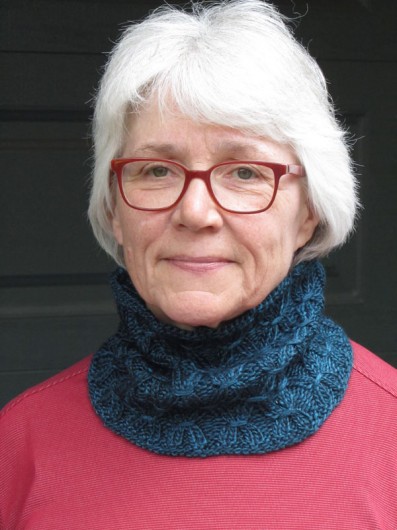 If you have any difficulty with the smocking stitch, I prepared this video “how to” that should help.

Ziyal is the Black Sheep Knitting Guild‘s selection for our July Knit-a-long. It’s a quick, fun knit. Just the thing, if you’re me, for knitting when the weather gets hot and muggy. Just knitting something for next winter cools me off.

This next cowl is Stephen West’s great Windschief pattern, knit as a cowl instead of a hat. I am a big fan of close-fitting cowls. 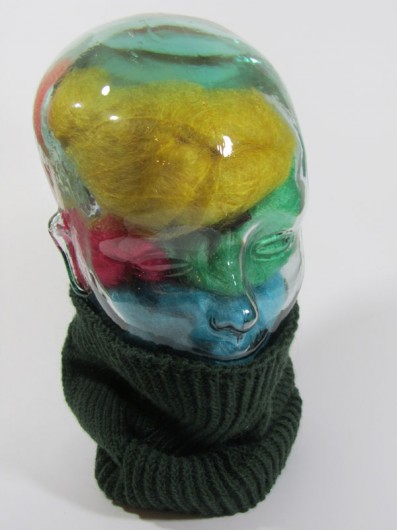 Here’s a better look at the spiffy construction. 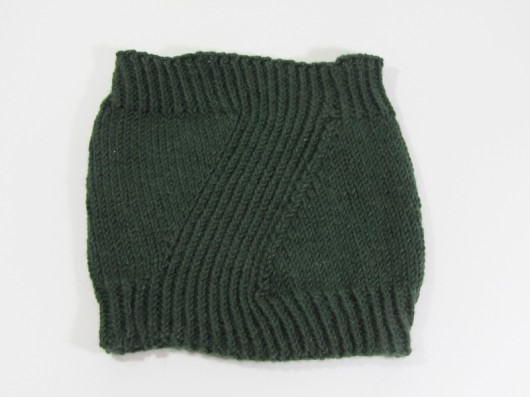 That swath of twisted rib puts just enough zip into an otherwise very simple pattern. This Windschief is knit in Berroco Worsted Weight Ultra Alpaca, a wonderful yarn in zillions of solid and heathered colorways.

This will be just the ticket for chilly mornings paddling to Ghost Bay come fall. 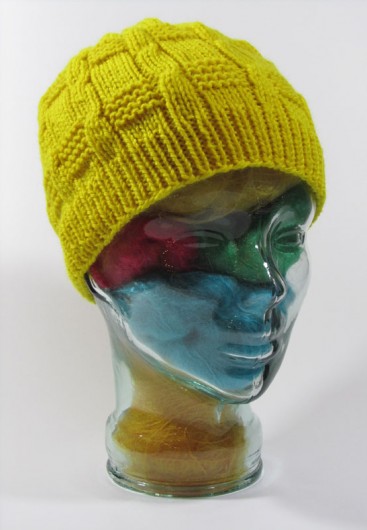 I knit warm hats year round. It’s never too warm to try one on. And it’s not like the knitting needs to rest on your lap.

This is Shilling, Chris Terramane’s contribution to the free pattern library. Shilling is available on Ravelry and on Terramane’s Simply Savvy blog. The pattern alternates garter stitch and stockinette squares and columns of what the designer aptly calls “purl-sandwiched” cables.

The directions include a variety of sizes, both child and adult. Directions are given for knitting flat (but don’t do that–why deal with the seam) and in the round.  The chart is super-sized and very easy to read. Wonderful!

My Schilling is knit in Plymouth Yarn Galway Worsted. Here’s a view of the top decreases. 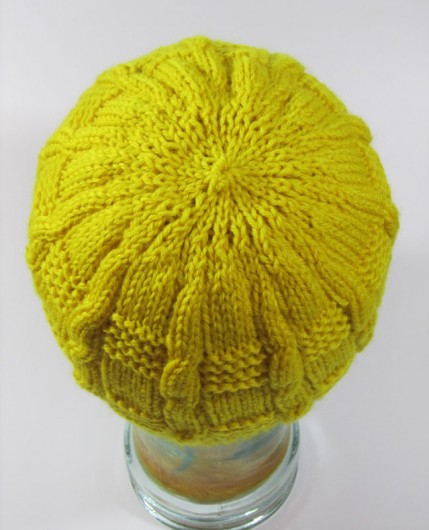 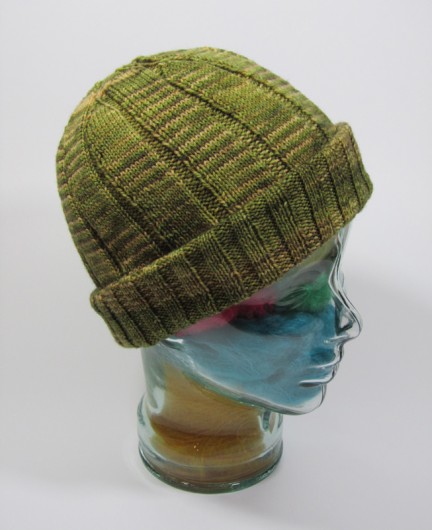 I modify the pattern to lengthen the hat and create a folded brim. Whether you knit the original version or add the folded section to warm up the ears in your vicinity, this is one great pattern. I’ve knit Bayfront six times now. The star of this knit is the top decreases. 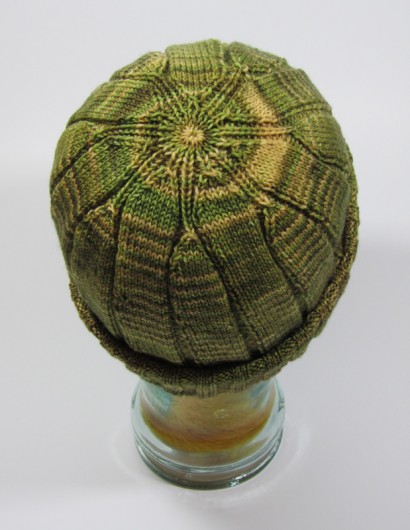 Another fav is Stephen West’s Windschief. This is also a multiple knit for me. This time I knit it in Cascade Yarns Alpaca Lana D’Oro, a 50% alpaca 50% wool worsted weight. It’s a tad hairy for my taste, but it’s still very soft and not a bit scratchy. 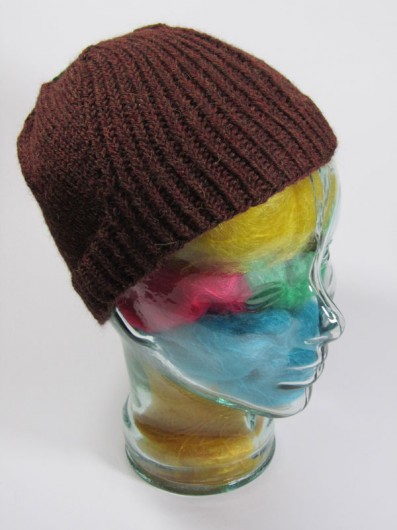 My glass head doesn’t wear this hat very well because, time for a confession, I ran out of yarn and ended up abbreviating the length. So this Windschief is child-sized. I’ve knit Windchief as a hat before. But it’s also a seriously great close-fitting cowl. You just stop before the crown decreases and bind-off “early.”

It’s been much warmer lately in Michigan. So, for this twisted knitter, it’s time to knit hats.