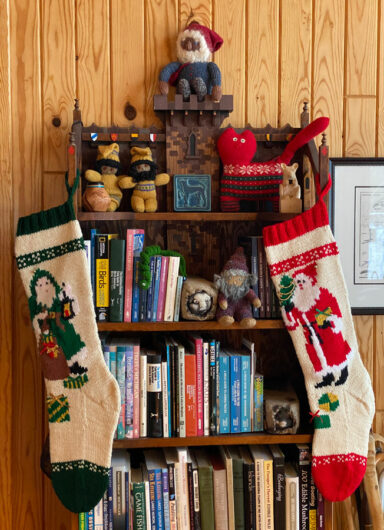 Maybe I’ve grown a bit Christmas-lazy in the past few years since moving to the lake full-time. But my version of all-out was always a tad subdued anyway. No giant inflatables. No light shows on the front lawn. No setting out of any Elves on Shelves to terrorize, I mean incentivize, tots to behave. My version was mostly a tree with a lot of knitted ornaments, strung with popcorn and cranberry garlands that took hours to pull off. Now? Now I  enjoy my yarnie Christmas bookcase.

What are you looking at? That’s a handmade bookcase painted to look like a castle that my partner Steve’s dad built. Steve’s dad worked in the display department in the downtown Detroit Hudson’s for many years. He was a talented artist, woodworker, carver, stained glass window maker, model-maker, and needlepointer. On the top right shelf, in the corner, is the church busking-mouse he carved, You know, as in “poor as a churchmouse?” The mouse carries a 1901 farthing in his front paws.

Also on the top shelf is Cat Pillow, Katie Nagorney and Ann Swanson’s cute design. You may know them by their company name, Two Old Bags. There aren’t a lot of Cat Pillow projects on Ravelry and my version is the feature photo.

At the left on the top shelf are Susan Weir’s Elf & Elf Princess. I made dozens of these sets over the years for bazaars at my son’s younger-year schools. Moving up to the top of the highest tower is another Susan Weir creation, her Tomten Doll. And on the second shelf is Darrian Dragge’s Knitted Gnome. This was a kit, sold through the Waldorf-inspired Hearthsong catalog, circa 1990. These gnomes were gnomes in the before-times, before Sarah Schira almost single-handedly educated the knitting community that gnomes, gnaked or otherwise, are creatures we can knit.

Hopping to the left of my gnome, over the head-in-a-brick sculpture, dangles my grandmother’s crocheted green bookworm. Bookworm has two plastic stick-on eyes and a jingle bell on her butt. I treasure this goofy thing more than anything else that comes out at Christmas. I loved Gram, a lot, and she gave me my bookworm.

My guess is that the stockings caught your eye. I did not knit them. Lois, a good friend of my mom, knit them. She donated them to a charity auction at my workplace. Every year she sewed and knit several items for the auction. You may have experienced that the hand-crafted items folks admire all year (“you could sell those”) don’t typically fetch anything like what they’re worth. Every year I would annoy my co-workers by getting the bidding started and continuing to bid up the best of Lois’s donations. One year my bid snagged these amazing stockings. 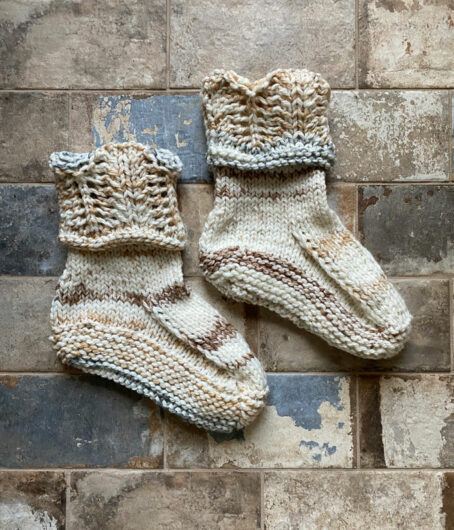 We all get cold feet. Literally and emotionally. But let’s just examine the literal side of this.

Knitters for many decades have knit something we’ve called “Dorm Boots.” The original circulated pattern may have been Amy Detjen’s “Aunt Alm’s Dorm Boots.” Veterans of knitting on the web will remember the camaraderie of the old knitlist. It was in the knitlist days that I knit my first pair of Aunt Alm’s Dorm Boots. Brenda Zuk modified the pattern a tad and came up with a good comfy pair of Dorm Boots. Garter stitch soles for a bit of traction. A nice cuff so they don’t slip off. And an excellent spine up the top of the slipper for a bit of style.

Ditching the center spine, Kris Basta has been working up variations of the so-called “dorm” boots for quite a few years now. The boots in the top photo are her Better Dorm Boots Deluxe. By now, college students with ties to the knitting universe must have a lot of warm feet. Basta’s patterns are free, which is incredibly generous. 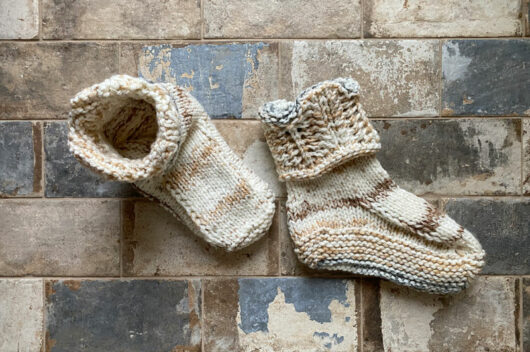 I knit my Better Dorm Boots Deluxe in King Cole Comfort Chunky, on US size 9 needles. They fit a women’s size foot from about 8-10 (US sizing). Basta’s pattern calls for worsted weight yarn, doubled. I have an aversion to knitting with doubled yarn because, for me–especially in an acrylic yarn–using doubled worsted yarn makes my hands hurt. But you of the nimble-handed world may prefer doubling worsted weight to wrestling with chunky.

Basta calls these next ones her Better Dorm Boots for Men. Again, I like to knit them in a chunky/bulky weight. And I prefer lengthening the cuffs. So far, no men I know say they want a shorter variety. 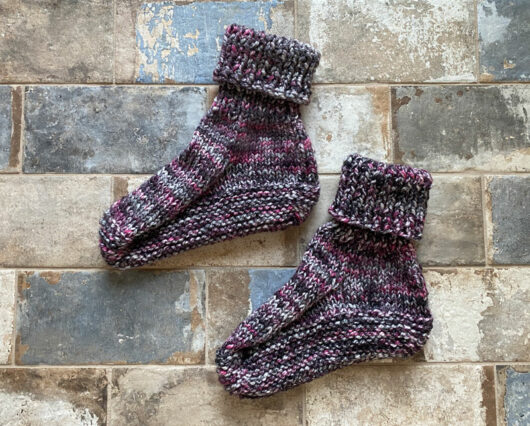 Thirty or thirty one Sundays would pass in 30/31 weeks. I last used King Cole when I was a teenager, more than half a century ago. Wow. OK I’ve not used King Cole yarn in way way longer than a month of Sundays. I should stop this before I depress myself. According to the Oxford English Dictionary, the first printed use of the phrase is from 1759 when someone named Hamilton Murray was writing his “Life & Real Adventures.” He reported that his commander swore he would dance to a particular part of a tune “for a month of Sundays.” At least I don’t personally remember 1759. Just take my word for it that a month of Sundays is a very long time.

The point is that I like the yarn. It’s excellent 100% acrylic yarn, if that’s what you need. And this Black Currant colorway is wonderful. Manly even, in a womanly way. Again, I used a chunky weight rather than doubling the yarn. Mine fit a man’s size 10 foot nicely and will easily stretch to fit a larger foot. You’ve seen me working this pattern before, within posts here and here and here. 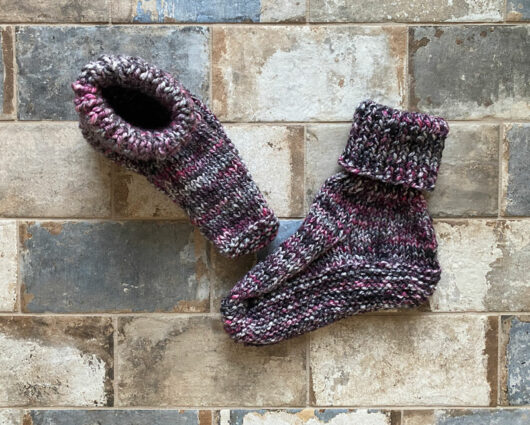 Basta has even more dorm boot variations. I decided to try Crocodilly Mocs for Women. Same basic construction. These have a fun crocodile stitch on the cuff. Basta provides a video link that clearly instructs on how the stitch is worked. 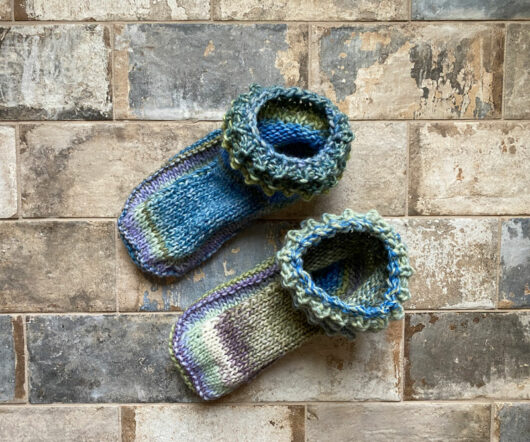 These mocs look sweet on feet. I especially like the mismatched result when knit in this Adriafil Mistero, a 47% acrylic 53% wool mix. 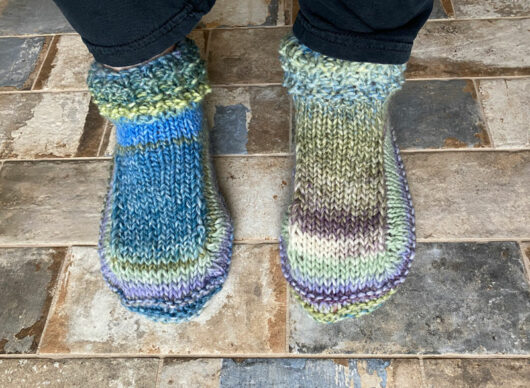 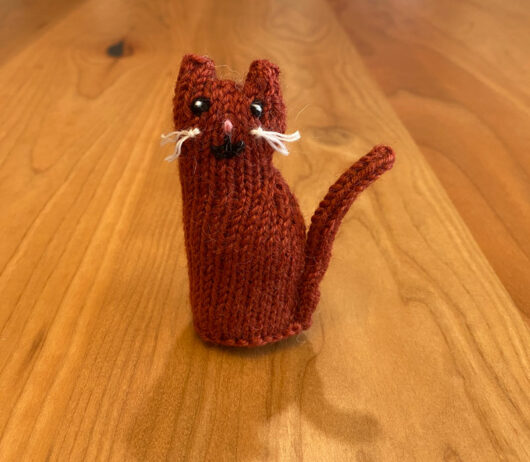 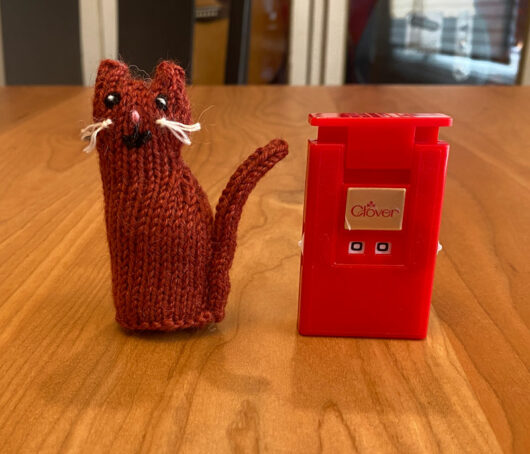 I felt like my cat was looking as if she needed her own cozy cat basket. 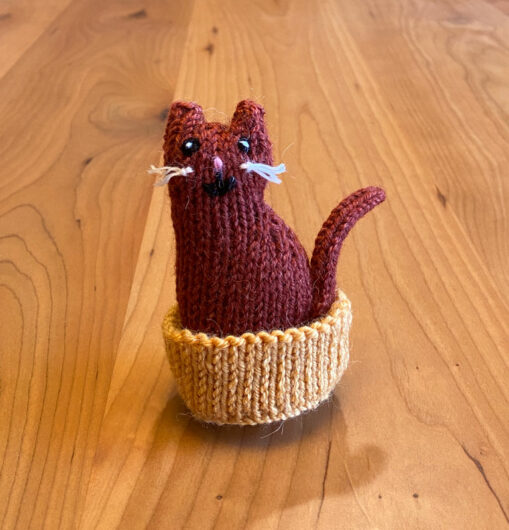 Tiny cat ended up in my granddaughter’s knitted “lovies” stash. Even her older brother thinks this guy is cute.

Keeping to today’s cat theme, I have two new cat basket blankets to show off. You’ve seen me working these before, here. I always knit them in Brown Sheep’s Lamb’s Pride Worsted.

I have a theory that that dab of mohair in the yarn turns out to be a real cat whisperer. 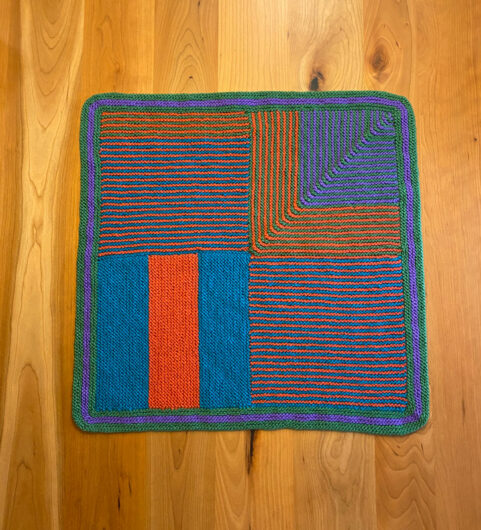 These two are my newest. 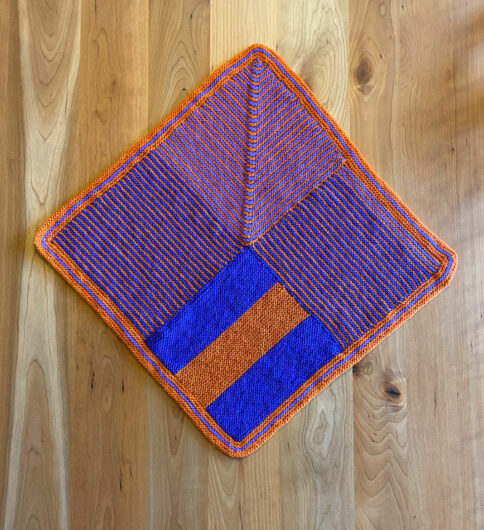 They’ve already been gifted to two good cats, in one good home, who needed a few more cozy landing spots. 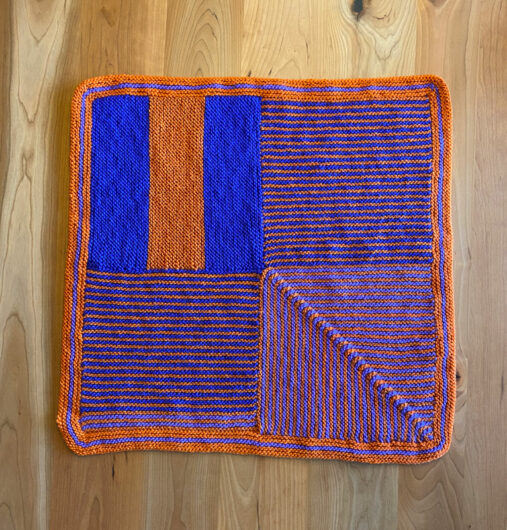 This is an adaptation of a freebie pattern from Donna Druchunas. Hers is designed for super bulky yarn. My version uses worsted weight. Mine increases the stitches in each section, adds that mitered square with decreases on the diagonal that avoids any sewing after the last square is finished, and includes a knitted-on edge. You will find the details on how I knit these cat blankets here.