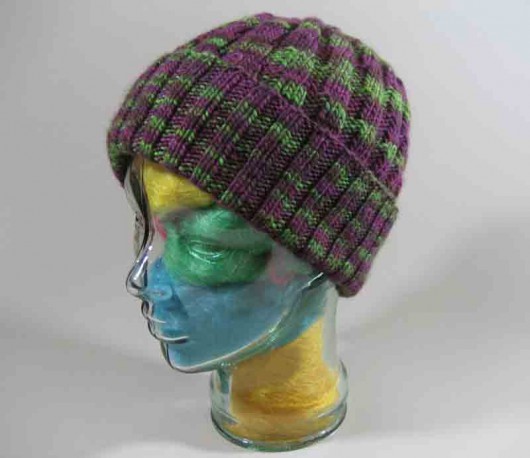 This is another project from Cascade, this time from “220 Projects from Cascade 220.” Cute idea for a book. Not too many of the 220 projects in that book have captured my interest, but this is an interesting twist on an old idea: “Spiral Rib Hat” by Mary Lou Egan. I’m the only one who has knitted it and posted it on Ravelry. It deserves more attention. The top of the cap, in particular, renders the swirl quite nicely.

This is Malabrigo merino worsted, in the sapphire-magenta colorway. I’d never heard of the yarn until I learned about it from other Ravelers. As of today, there are 48,706 projects knitted of it and posted on Ravelry. It’s currently stashed by Ravelers, awaiting project production, 29,962 times. In fact, there is only one yarn that has been used more often in Ravelry projects. Yes, that would be Cascade 220 wool. That’s been knitted up in 55,793 projects so far.

So, what’s the fuss? Malabrigo merino worsted feels like a cloud would feel if someone spun it into yarn. The yarn is kettle-dyed pure merino from a small family-run company in Uruguay. That’s their story, anyway, and I’m not gonna question it. It is wonderful yarn, for sure. Maybe that small Uruguayan family adds mass quantities of Downy Fabric softener into their sheep’s breakfast. At a minimum, their kids must be deployed to assure that the family sheep never roll in thistles.

If you have an “eek–not wool–wool makes me itch” person in your vicinity, try this yarn. The stuff will make a believer out of them. 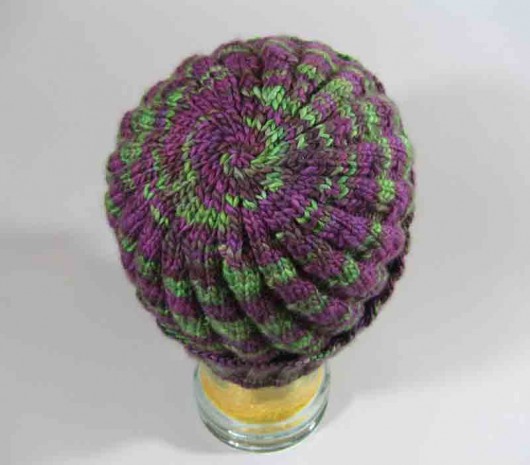 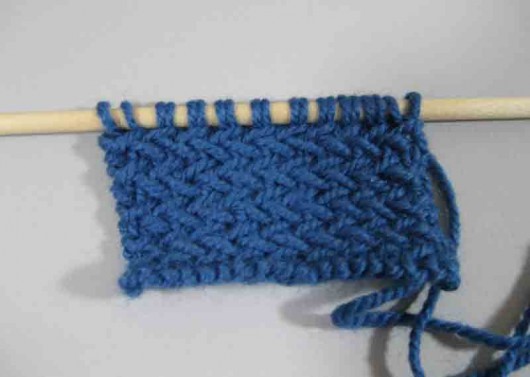 This is a very old friend. When I read the description of how it was done, I didn’t even recall this stitch. But then some kind of muscle memory took over and I remembered using it, long ago, in who knows what. It is a two row repeat, worked on an even number of stitches.  Row 1: knit 1, * slip one (as if to purl), knit one, pass slip stitch over (but leave it on the left needle and knit into the back of it) *, repeat from * to *, knit one. Row 2: *purl 2 together (don’t slip it off the left needle), purl again through the first stitch*, repeat from * to * across row.

What moved this stitch out of the memory banks and into my hands, is my current project: Chris de Longpre’s “Wrap Me Up.” This Knitting at Knoon pattern is great fun. It’s basically a stitch sampler shawl, with each new block knitted on to completed ones.  Block 13 is knitted in criss-cross stitch.  I’m using size 4 needles and three complementary colored variegated Opal 6 ply sock yarn.  Mine will be a scarf instead of a shawl.  Here’s how the criss-cross block knits up. Obviously, it’s the herringbone stitch on the right side: 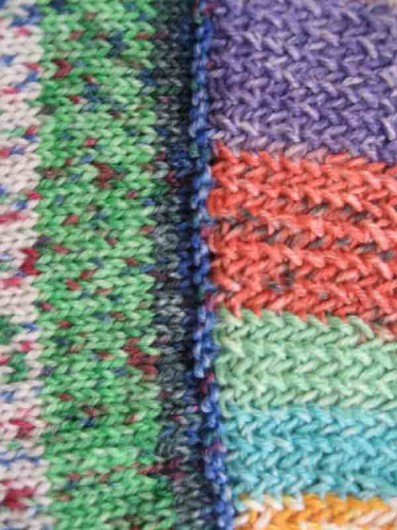 There wasn’t much out on the net demonstrating this stitch. With Steve’s help, I’ve posted my first YouTube video. Some of it came out fairly nice. The audio is not too bad  The demo of the knit side works. As for the purl side–you’ll be able to follow it, despite my best efforts to keep ducking my knitting out of camera range. Who knew I purled with such rhythmic enthusiasm. Feel free to critique the video. If you haven’t yet tried this stitch, it creates a very firm fabric.  If you aren’t easily bored, a narrow strip of it could turn into a nifty necktie. 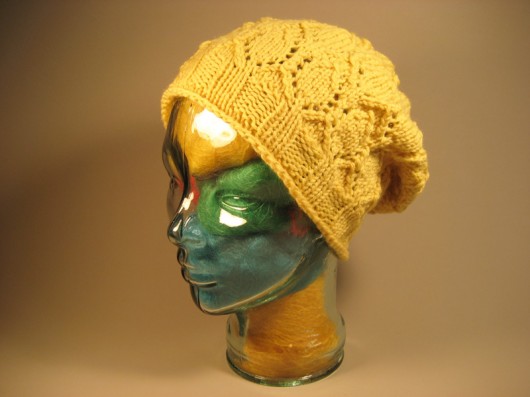 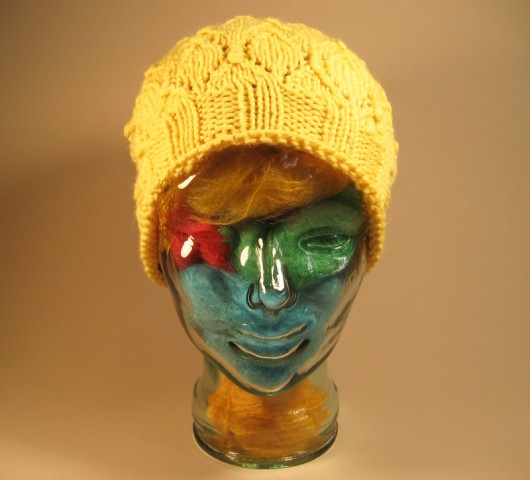