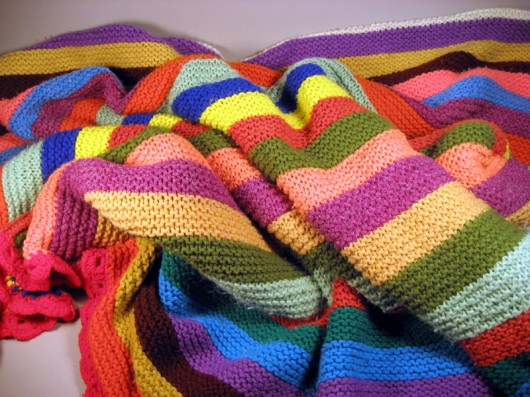 This was a scrap yarn blanket, at least at the start. After a bit, I ran out of scraps and actually bought a few skeins. Money was hard to come by. I had to save up to buy a skein of cheap acrylic. I see “Dazzle” in here, and lots of Red Heart is my guess. In my first family, only my grandmother knew how to crochet. Eventually, I taught her to knit.  Gram crocheted the edge on this afghan.

I knitted about twelve inches of this on July 20, 1969, watching on a small black and white TV as the lunar lander approached Tranquility Bay. We were “up north” staying at what was, then, my favorite place in the world. Elk Lake, on the northwest side of Michigan’s lower peninsula. Every summer for all the Julys of my childhood and teen years, we rented Mrs. Zink’s  small cottage for two weeks. If you know the lake, it was at  what is now known as Zink’s Point. We never took a television to the cottage. Why would we? But that year, we made an exception.

July 20, 1969. I knitted and daydreamed while Neil Armstrong landed on the moon. I was 16 years old that summer. I’m 57 now. This is the oldest surviving piece of my knitting. It’s pretty dopey looking, but I treasure it. Elk Lake. Family. Mom, Dad, Gram, Pa, Lee, my brothers. For two long weeks. And during the summer of 1969, Neil Armstrong walked on the moon. For a kid, it just couldn’t get any better than that. 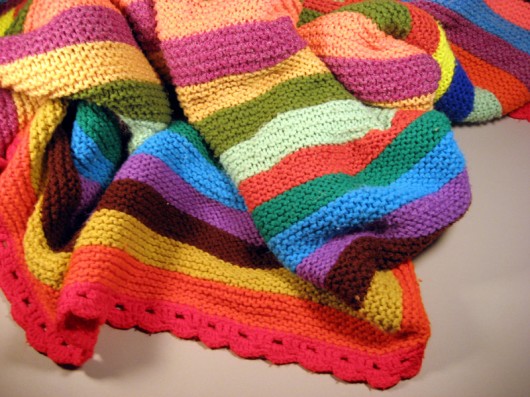 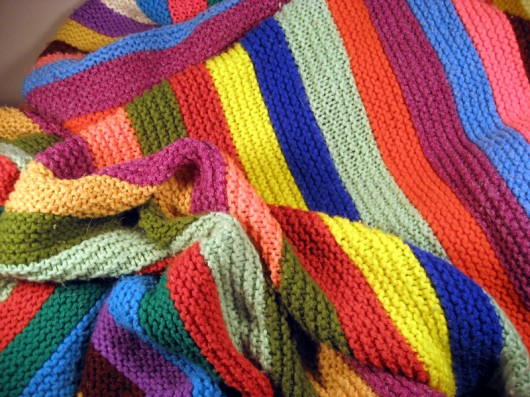 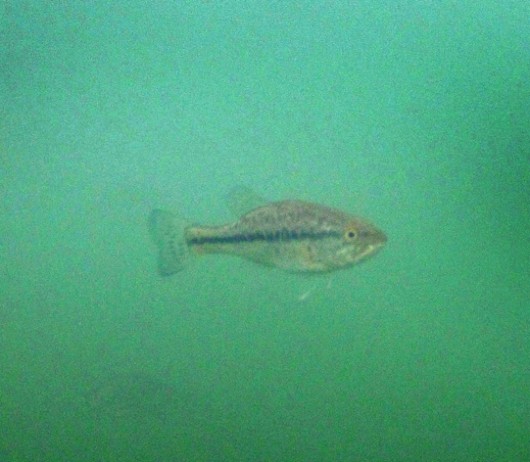 I watched all the Jacques Costeau episodes as a kid. Obviously I learned nothing from his crew’s underwater photography techniques. What I did was reach out of the kayak, stick the waterproof camera in the water, and snap photos while fish swam by. I snapped a lot of nothing, and then this little fish happened by at the right moment. A not-so-large large mouthed bass.

Wants to see the internet

Not  a cute pet

Has to stay wet

Has to stay put

Has to stay free

Before she meets that internet 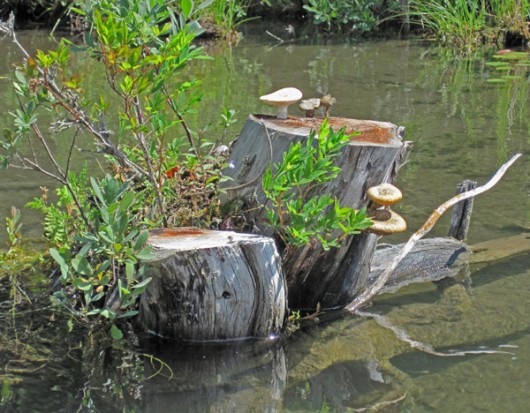 The Narrows connect the upper and lower lobes of Long Lake. This is near the South end of the Narrows. Lynne Rossetto Kasper’s The Splendid Table has nothing on this special spot. The table is set with flowers, appetizers (but these varieties of mushrooms might be poisonous). An altogether nice place setting, just waiting for the meal to arrive. I’ve seen dragonflies land on the stumps, resting on their way to their next mosquito. Small bluegill sometimes gather in the shade.  I like to park my kayak nearby and just watch to see who turns up. 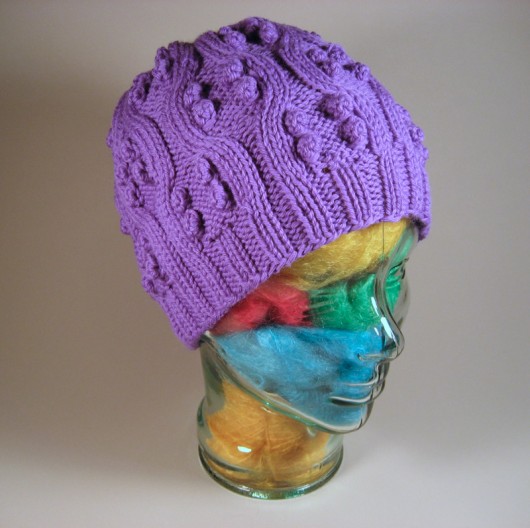 It’s been very hot in Michigan lately. Even at the lake, temperatures reached into the 90’s. This is perfect weather for small projects. 60 Quick Knits is a great new book that features all Cascade 220 yarns. 20 hats, 20 scarves, and 20 mittens. This one is Bobbles and Cables designed by Suvi Simola. A fun, quick knit, worked up in Cascade 220 wool. 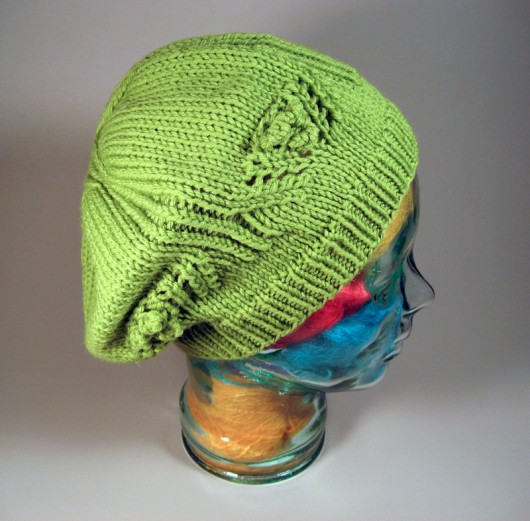 Starfish Hat, by Anne Farnham, worked up quite nicely. I moved the needle size up one beyond gauge, to get a bit more slouch in the main section. The bit of lace and bobble mix is easy peasy and adds a nice touch. And at the crown, the decreases form a starfish shape. This electric green will brighten up a wintry day. Cascade 220 wool has such a wonderful selection of colors. 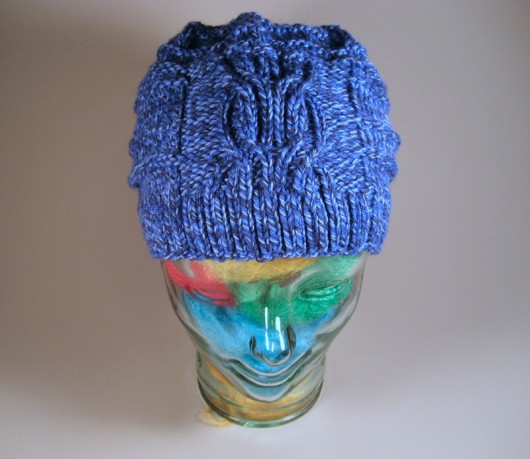 This one, knit in Cascade Quatro, is “Tasseled Topper” by Linda Medina. That must make mine: No-Tasseled Topper” and I think it works nicely.  Not a fan of tassels, but I like this hat.

Cascade’s new book is great for knitters looking for small projects in worsted weight yarns. In the last few weeks, I’ve knit these three hats and have already started my second scarf from the book. 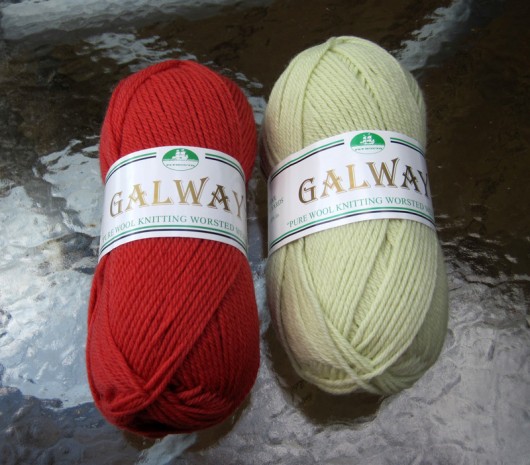 Durenda Pake’s “Yarns To Go” shop  is located at 127 Second Street, in the heart of downtown Alpena. She has a wonderful selection of natural fiber yarns, as well as acrylics. I’ve never knit with Plymouth Yarn‘s Galway and so I selected these two shades for a pair of fair isle mittens. It’s a yarn that looks quite comparable to Cascade 220–maybe a  bit more “refined” and a bit tighter twist. On US size 8’s it should knit up at 5 stitches to the inch. So says the ball band. The yarn is spun for Plymouth Yarns in Peru. 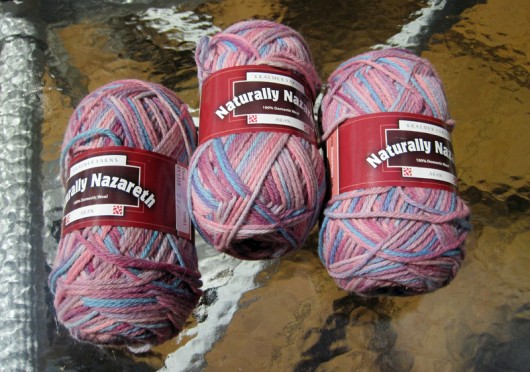 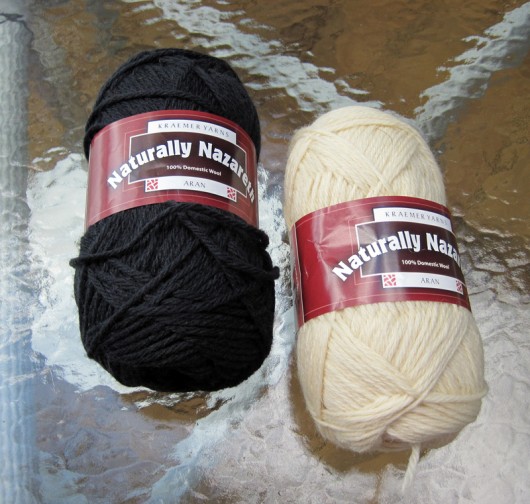 Naturally Nazareth is a “100 percent domestic wool” that I am not familiar with. Yarns To Go has a small selection of what the ball band describes as Aran weight (4.5 stitches to the inch on US size 8 needles). The yarn is produced by Kraemer Yarns. I puzzled over the “Naturally Nazareth” yarn name–until I saw that the yarn is spun in Nazareth, Pennsylvania. I plan a scarf for the variegated yarn and a pair of mittens for the black and natural. 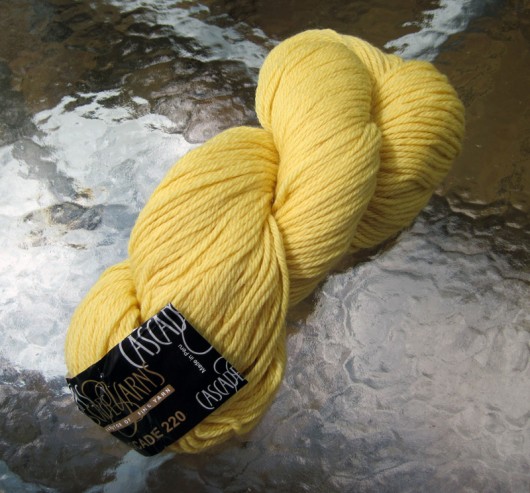 Locally, Cascade 220 is getting to be hard to find. Maybe the shops have mostly abandoned the yarn to the internet sellers.  The shops nearer to home have started stocking Ella Rae, instead. Good yarn, but not Cascade 220. I like the somewhat more rough look of Cascade 220 better. Plus Ella Rae is more expensive.

So, if you are in Northeast Michigan looking for yarn shops, be sure to check out Yarns To Go. Nice people. Helpful. Lots of yarn. And a surprisingly complete and up-to-date selection of books.