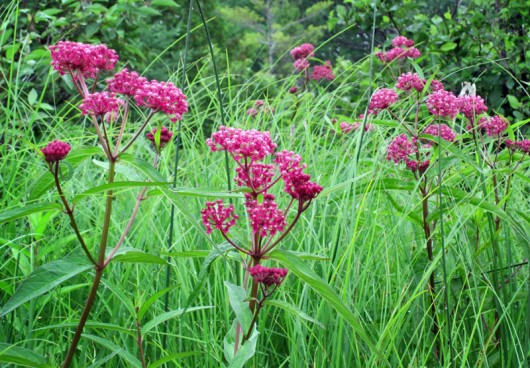 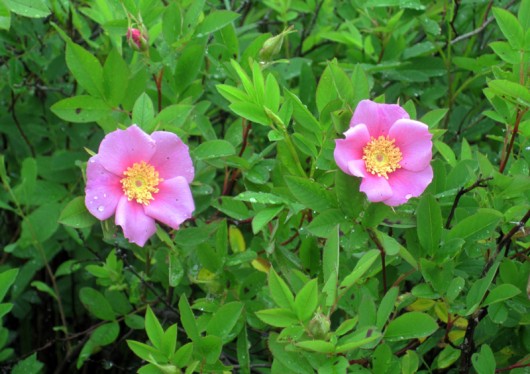 The small peninsula that helps frame our bay is filled with these beauties. I’m no gardener. And flower identification is not my skill. But I’m pretty sure that the top flower is swamp milkweed. Asclepias incarnata. They like to grow at the water’s edge, where this bunch is thriving. Their roots are especially adapted to living in wet soil that is oxygen starved.

Most varieties of milkweed are poisonous. They contain cardiac glycosides that can interfere with heart function. Some bugs love to munch on them anyway. Milkweed beetles. Milkweed bugs  And the caterpillars that end up as Monarch butterflies. These bugs tolerate the poison and typically signal their poisonousness to birds by being colored yellow and black. You can learn a lot about swamp milkweed here and here. Birds use the hairs of the milkweed to line their nests. Oh, the flowers aren’t poisonous. Still, I would think it best not to toss them in your next salad.

The second beauty is Smooth Rose, a/k/a Meadow Rose. Fancy scientific name: Rosa Blanda. It grows to about three feet high. It likes moist soil. With Long Lake constantly lapping up onto the peninsula, it can’t get much more moist. And this year we’re going for the record on rainfall. The wildflowers are apparently lovin’ in. 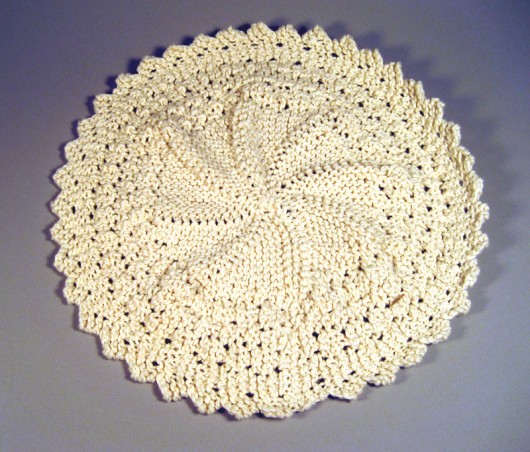 The trio of washcloths in this post are designed by Evelyn A. Clark. The patterns were published by Fiber Trends in a booklet called “Bathtime Blossoms.” They are worked flat, in short row wedges. Eight wedges to a cloth. I knitted mine in a discontinued Rowan “100% organic” cotton that’s been in my stash for about a dozen years: Fox Fibre. Size 3 needles. Clark calls the first one “Flowered Wreath.” Next is “Blossom.” The last one is “Scattered Flowers.” They are each a quick knit. 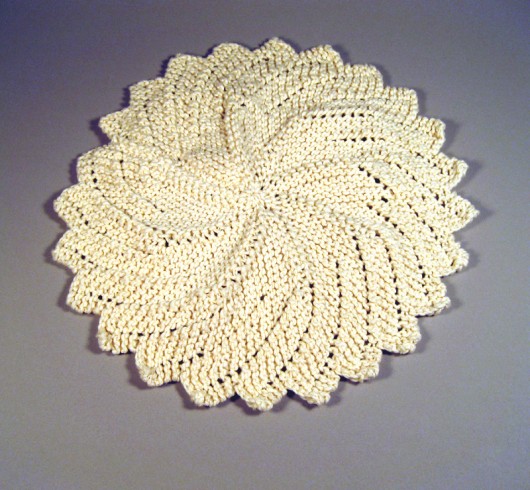 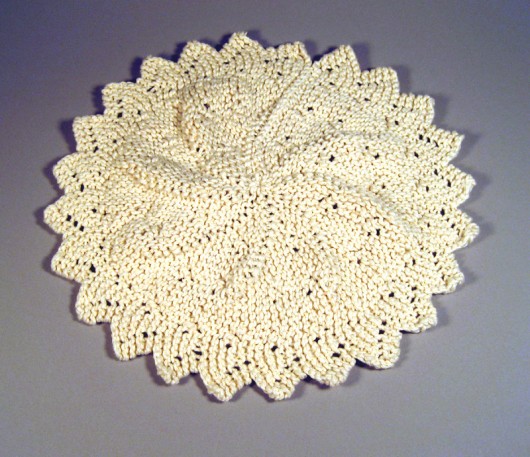 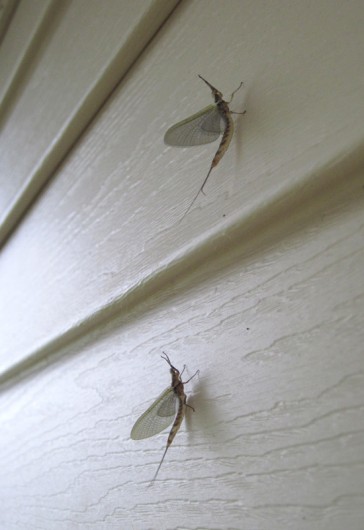 Growing up on the east side of Detroit, we called them June Bugs. Steve grew up in the same neighborhood and he called them Mayflies. According to Wikipedia, these guys have a boatload of aliases. Fishfly, Dayfly, Shadfly, Green Bay fly, Lake fly, Jinx fly. They are members of the order Ephemeropter.  Same Greek root as ephemeral.  Short-lived.

What we see is just the end, and a very brief end, of a much longer life.  In their immature naiad stage, these bugs can live up to four years in stream beds and lake bottoms. They look more like beetles during that phase. Some species transition through up to twenty moults. When the time is right to hatch and mate, they are often launched airborn in a rising bubble of air. Actually, lots of rising bubbles of air. The hatch can be very impressive. Reports are that a hatch on Lake Erie once showed up on Doppler Radar.

Once hatched, Mayflies mate quickly and on the fly. You can click here to hire pest control services. Both male and female are doubly endowed when it comes to their mating paraphernalia. The male dies straight away. Females may live a day or so. Once they emerge from the water, with their skinny segmented bodies and delicate veined wings, they’re done with eating. Their digestive system is filled with air. That makes them light enough to float.Their mouths are just vestigial.

A prolific hatch is sometimes taken as a sign of the general health of a river or lake. Long Lake must be pretty healthy. They arrived yesterday in great numbers. The Purple Martin are gonna have major tummy aches tomorrow because they’ve been buzzing around all day eating their fill. They’ve even been swooping in to pluck them off our dock. Hundreds of the bugs are clinging all over our lake house. In the morning, our walk to the water will be very crunchy. 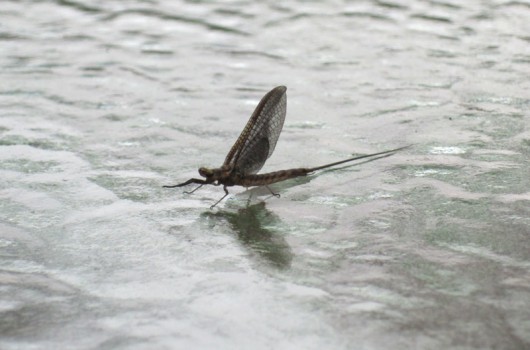 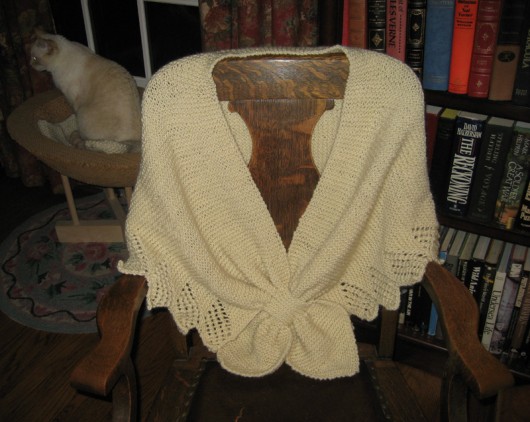 Knitwear designer Cheryl Oberle tells the story of how knitter Carol Sanders deciphered the pattern to a shawl from the 1880’s. She generously includes a free PDF of the shawl (this one) on her website. Cheryl calls it “Carol’s Clever Little Shawl.” Carol has decided that Mrytle originally knitted the shawl. This one is my version, which is very true to the original. I knitted it in Brown Sheep Lamb’s Pride Worsted, in their color M-140 Aran. Brown Sheep is often my “go to” yarn. At 85% wool, 15% mohair, it is warm as can be. It can sometimes be a tad thick and thin, but never too thick and never too thin. It is very reasonably priced and comes in wonderful saturated colors.

This was a fun knit. The three regular readers of my blog know that I’m a big fan of garter stitch. Some experienced knitters find it very boring. I find it very calming. This shawl uses a bit of short row shaping to give it a nice drape. The keyhole is a wonderful feature. No need for a shawl pin or for fussing with a knot. And the touch of lace is a touch of inspiration.

Thank you Carol and Cheryl. Oh yes, Mrytle too. (That’s Hoover in Elizabeth Paige Smith’s  kittypod in the background.)