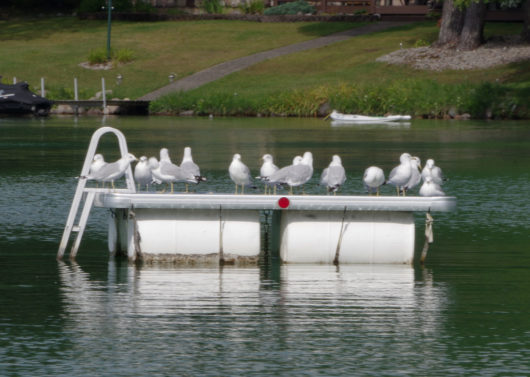 Gulls know how to do the flock thing for sure. Pity the next human visitors to that raft. Hopefully they came with a mop. It does make you wonder though. It’s not like someone spread a breakfast of bagel bits on the raft and hollered “come and get it.” 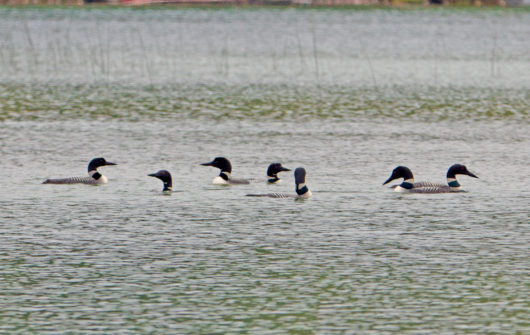 You hear that distinctive wail of the loon and you never figure they’d gang up or have a party. But they do. And here on Long Lake.

Then there are the true loners, like this Great Blue Heron walking slowly through the shallows looking for tasty morsels. 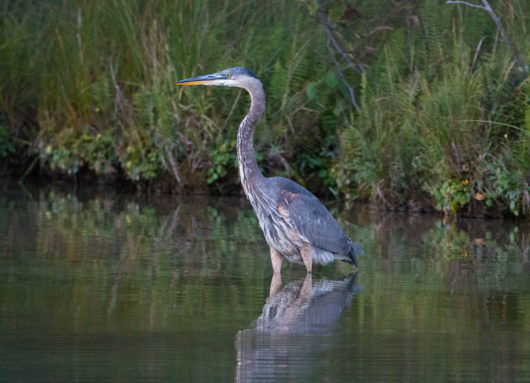 Apparently if the vantage point isn’t quite right, they’ll try for a better view, though. 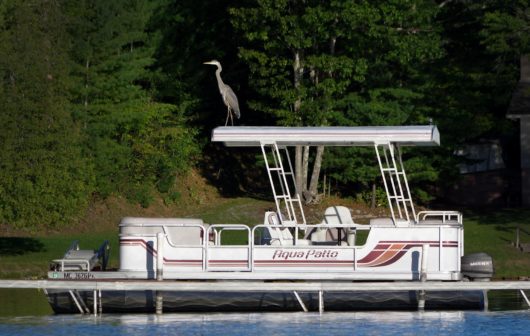 The Eastern Kingbird is often seen hunting solo for insects. But they work in pairs to feed their young. 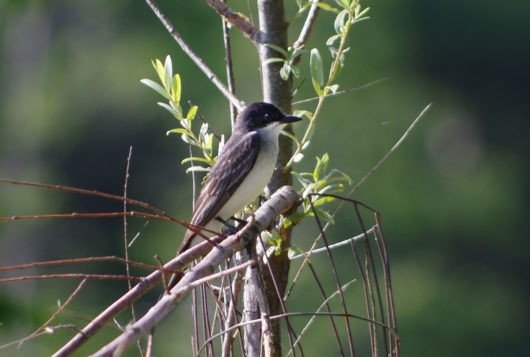 Kingbirds don’t look particularly menacing. But if you come near their nest before the chicks fledge, look out. How do I know? They nested again this year in the cupholder on our dock bench.

They sort of fake you out because they tolerate your presence while they sit on the eggs. But once the eggs hatch, look out. Once the eggs hatch and you’re just minding your own business quietly trying to unmoor or moor your pontoon boat’s dock lines these birds are fierce. And they don’t just fly around above and squawk menacingly. They dive bomb right at your head and aren’t satisfied until they’ve actually hit it. I thought for awhile if you didn’t talk and if you didn’t look in their direction, they’d leave me alone. They proved me wrong on both strategies. We surrendered our dock bench to them for the duration. But we weren’t willing to surrender our boat rides and so we paid the price. No injuries though. Not to us and not to the Kingbirds.

We see Flickers alone or in pairs, often pecking around in the dirt looking for bugs and other protein. 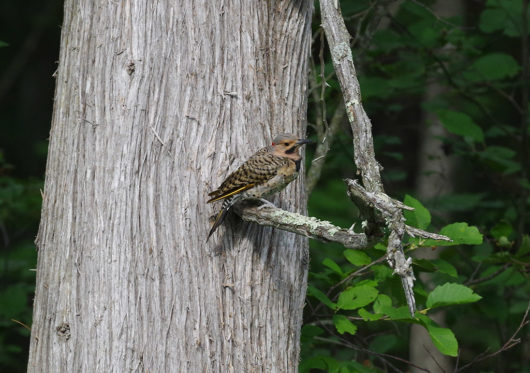 This guy was just resting a bit, near as we could tell.

There are some birds that all Long Lakers can identify at a glance, like this Gull giving a Bald Eagle a hard time. 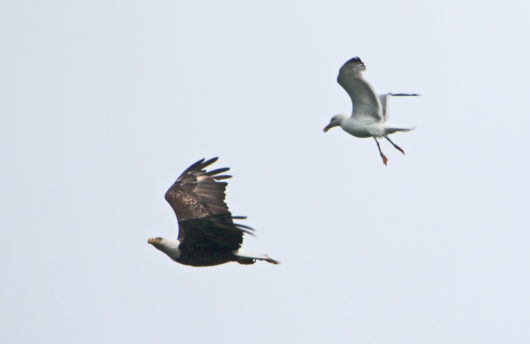 The Gull knew a threat, to young we assume, and went after the Eagle. There were some interesting aerobatics. At one point the Gull bounced off the Eagle, doing no apparent damage to either.

Cormorants seem to be more frequent visitors to Long Lake. We may even have a few permanent resident Cormorants this year. 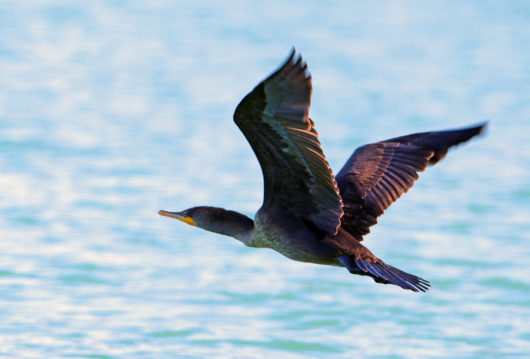 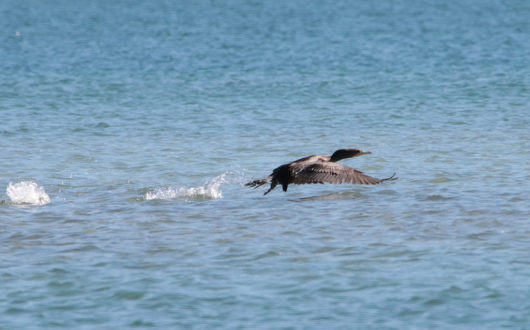 Long Lakers aren’t freaking out though. Sure, Cormorants fish almost as effectively as Jeff does. But we don’t get much by way of walleye stocking these days. And besides a few Cormorants just do their bit to increase our lake’s biodiversity.

Speaking of biodiversity, please leave a comment if you recognize who this pair is. We spotted them in Ghost Bay on August 18th. 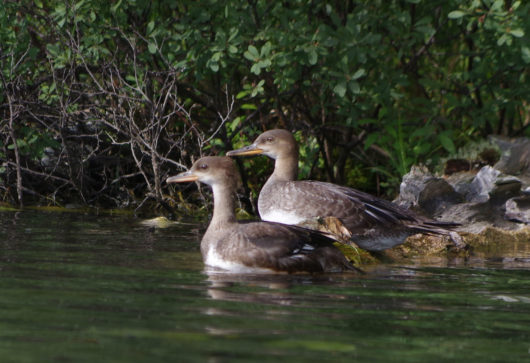 I thought they were adolescent mallards. We did have a brood of mallard chicks this year. But these upper bills have an overlapping point at the end, more like a merganser and unlike a mallard. If they are mergansers, maybe in their eclipse plumage, they must have forgotten to check the calendar. Plus they must have lost their GPS because we should be seeing Common Mergansers only briefly in the early spring or late fall. Please leave a comment if you recognize this pair.

We’re getting into the migration season again on the lake. It’s such a fun season and we’re fortunate that so many species decide to land and spend time on our lake. Actually, though, I must betray my biologically incorrect bias and confess that if the Canada Geese would just keep flying I’d be fine with that. 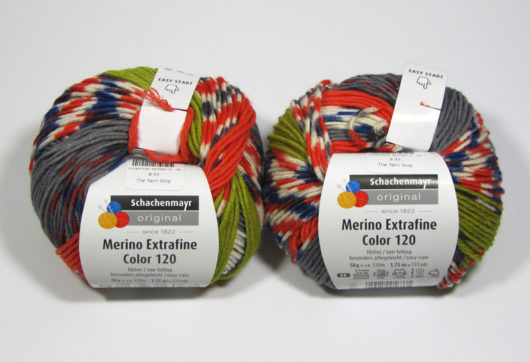 Sometimes yarn surprises. At least I think so. The pattern I knit this up in is Michele, by Sarah Punderson. Free on Ravelry. Looking at the pattern photos, you see a dignified, low key, beautiful DK weight slouchy hat.

A guildmate of mine mentioned that when she saw my yarn choice for our knit-a-long, she thought I must have screws loose. Well, no. She was actually very polite about it and said something like that she’d plan to watch with interest. And, no doubt, much skepticism. 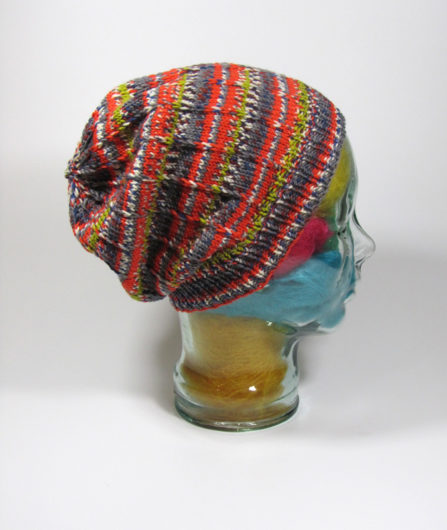 But this is one great hat. Really. It is. I’m tooting my own horn, I know, but this hat makes such a lively statement that its wearer and everyone around will put on their happy face. And how can you not love that bulls-eye crown decrease? 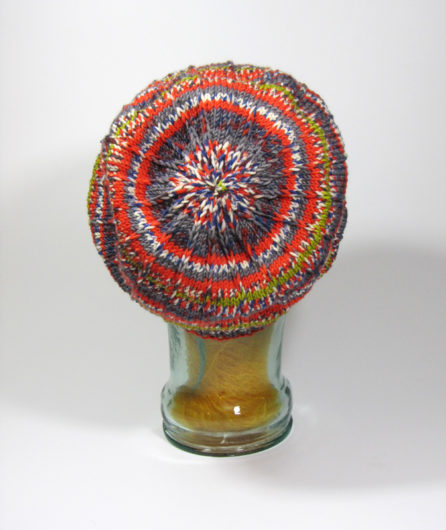 I know. Not everyone’s cup of tea. Our yarns start out life in our stashes like this. 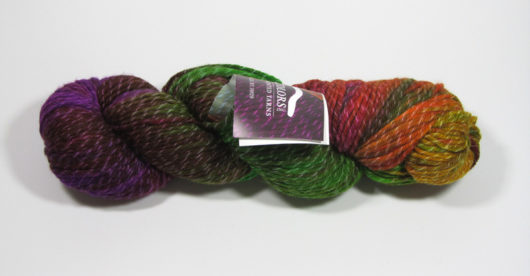 And then they turn into this. 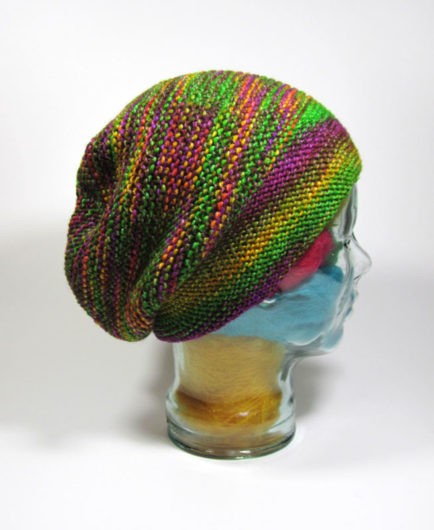 This Mountain Colors Twizzle in the Mardi Gras colorway turned into a great Rikke Hat. Rikke, designed by Sarah Young, has been knit and posted on Ravelry about 9500 times since it debuted in 2010. These yarns will pool, but tamed by the garter stitch, they work out really well. I especially like how the brim pooled differently from the body of the hat. 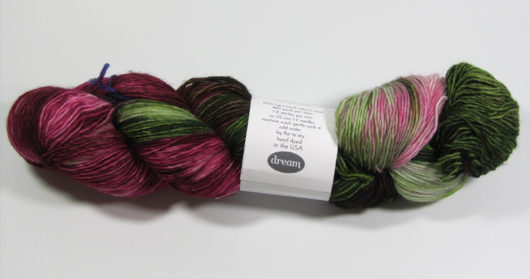 But, instead, you find Martina Behm’s great one-line free pattern, Wolkig, and then your Jilly turns into something else entirely. A little silly rather than classy. Behm’s sample is a lovely pale gray. Really beautiful. But I like my version. Glass heads thinks it’s the cat’s meow. 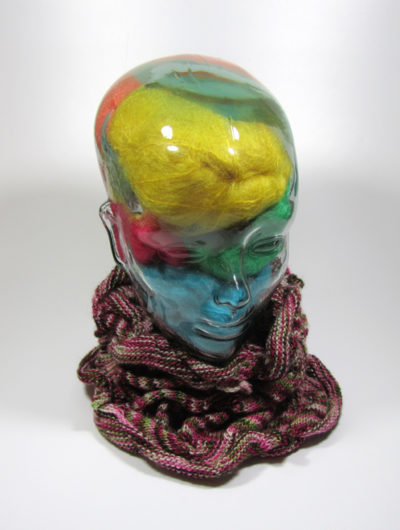 Here’s a closer look. This pattern is worth downloading just for the fun of figuring out how the heck one round, repeated over and over, turns out like this. 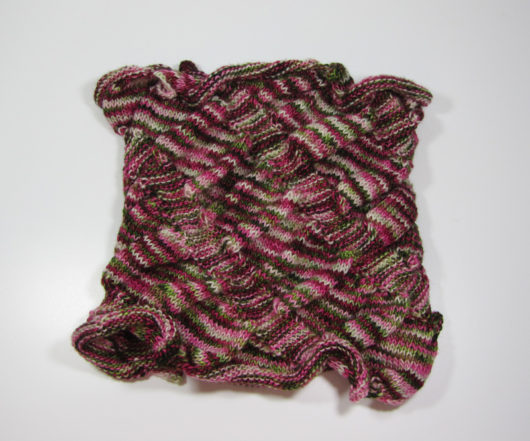 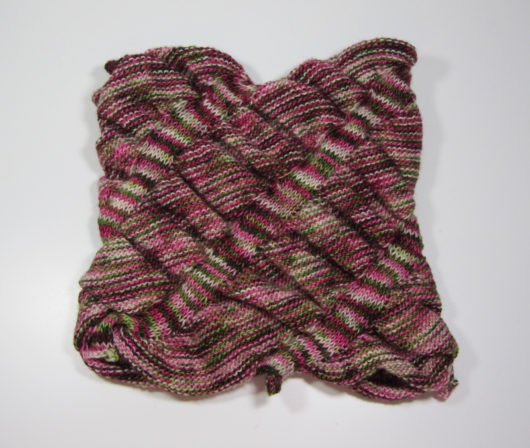 Wolkig. It means “cloudy” in German. That is a perfect name for Behm’s gray version. Mine? I might call it something more like “cloudy with a chance of meatballs.” 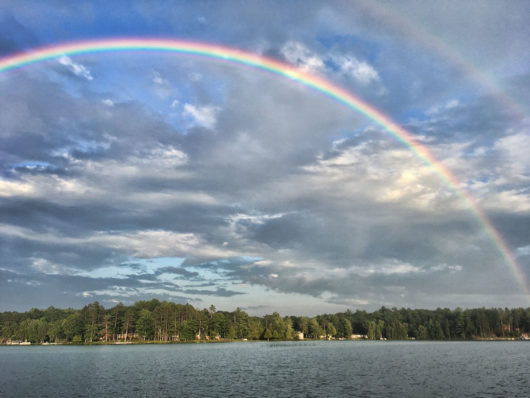 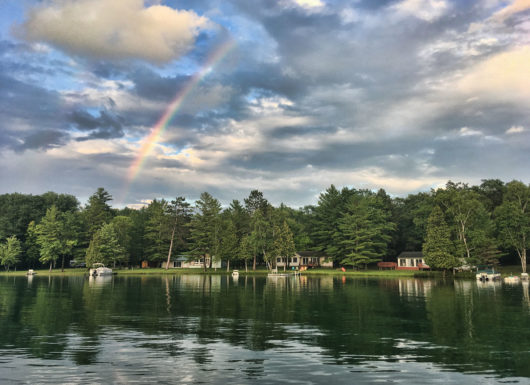