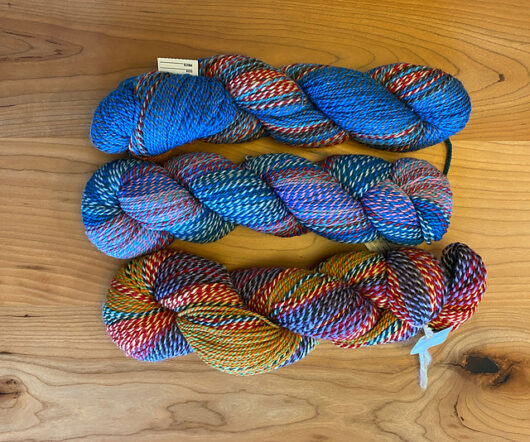 The world is roasting. I’m thinking about hats. Winter hats. Warm ones. Worn in snowy cold times. I’ve found some snow-filled photos of previously unblogged hats. Maybe it can be a breath of cool air. Probably a crazy idea.

Crazy is what Michigan’s Stonehedge Fiber Mill calls this version of its sport weight merino. Those colors have enchanted many a knitter. And, methinks, it’s exactly those colors that can keep the yarn languishing in stash while we look for what to do with it. I had plans for these 3 skeins. What plans? I don’t recall. But I remember getting help at a yarn shop with a great selection of colorways because I wanted two skeins that were somewhat alike and one skein that was different but would work well with the other two. Time passed. And passed.

Last winter I decided it was time to knit up some of the beautiful yarn in my stash. Crazy qualified as beautiful. I retreated to one of my favorite places in the knitting universe: hat patterns.

This is Katushika’s Wurm, a great Rav freebie. I had a lot of blue in my skeins. I decided to manipulate the colors a bit so that a band of red and some brown would anchor the middle of the hat. 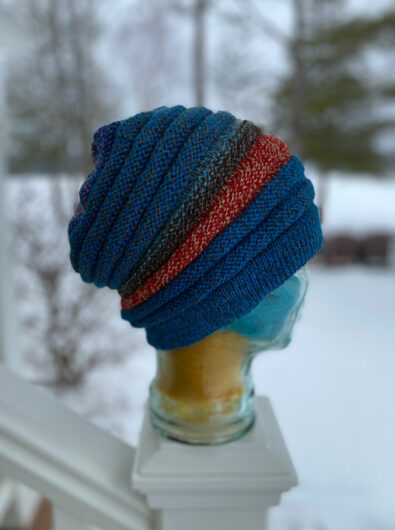 The crown of the hat just happened as the colors in the skein progressed. I’ve knit 7 of these now and only have this one left in my gift stash. They’re a popular gift pick. You can adjust the extravagant slouch, of course. But I like them super slouchy. Rav has more than 17,000 project pages of Wurms. You might want to add one of your own. 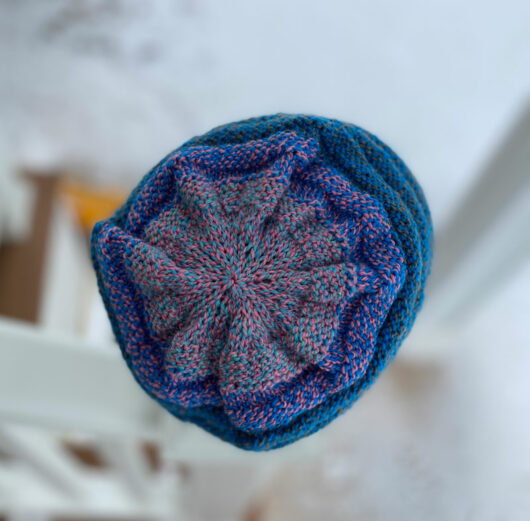 Next up is Chrissy Graham’s River District Hat. In her pattern page version, the hat is beautifully sedate. In my version it looks like it could use some sedation. But I really like it like this! 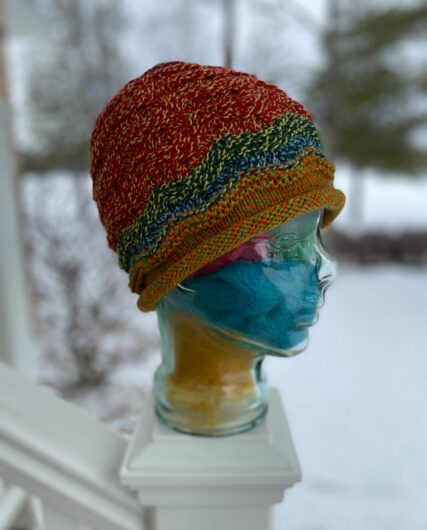 This time I just let the colors progress as they lined up in the skein. That’s often when Crazy is at its best. 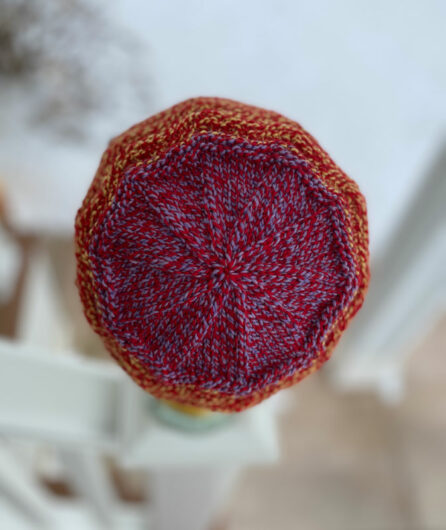 Here’s another River District Hat and another example of how Crazy colors progress in a skein. 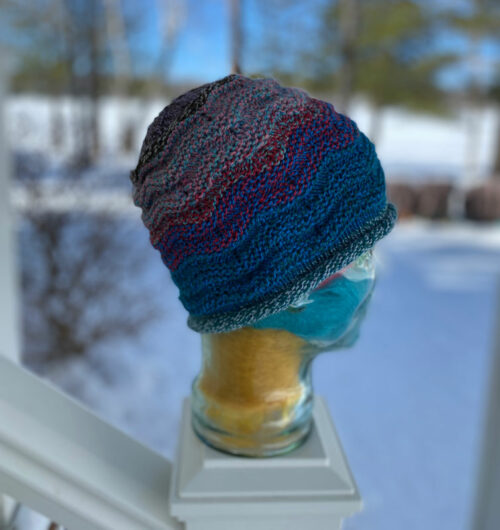 That short length of black and white worked out perfectly to frame the crown decreases. 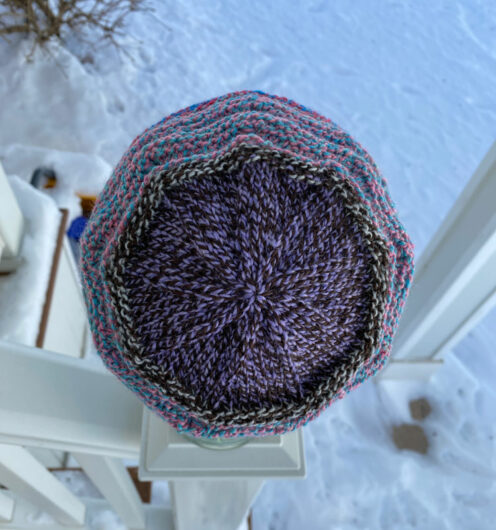 And, all together now, a long sigh for how nice that snow looks. 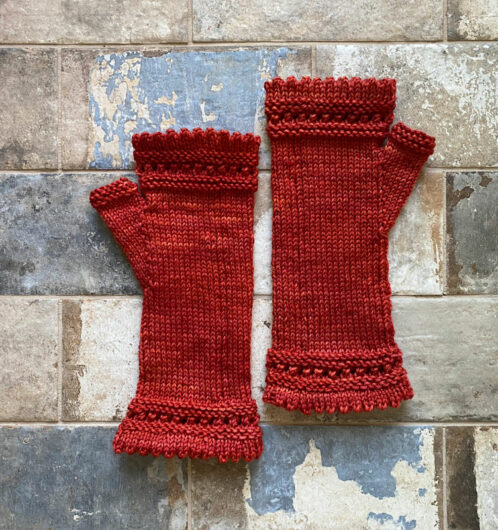 These are Susie Rogers Reading Mitts. Yep, the pattern is old enough that they aren’t texting mitts. They’re reading mitts. This is the old Susie’s Reading Mitts from Dancing Ewe Yarns (now closed) updated by the original designer, Susie Rogers. You can work from the English directions. Or the French directions. Or the Polish or Korean directions. I picked English since my Korean is a little rusty. It’s a great little free pattern with an international pedigree. Thousands of Ravelers around the world have knit these mitts and taken the time to post their knits to a Ravelry project page.

My mitts have a bit of history. They are knit from String Theory Merino DK in the Rose Madder colorway. Wonderful yarn. 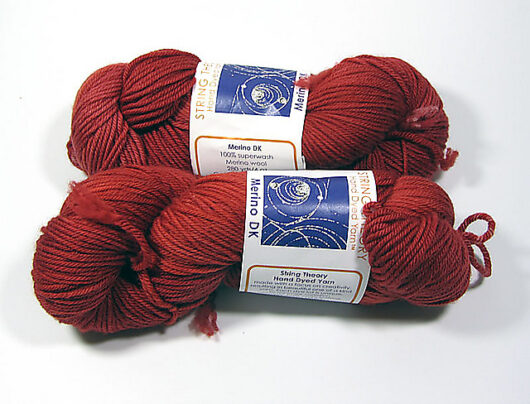 In 2014 I knit myself a hat. Jo Klim’s Dawnlight Slouchy Hat. It was beautiful. Was is the operative word. Somehow it didn’t work well on my head and I wasn’t wearing it much. But I really liked that yarn. So eight years later, I unraveled the hat, steamed the yarn while it was on my swift, and started over. 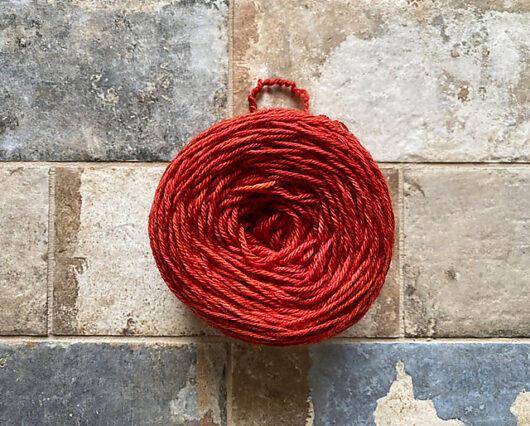 I knit my mitts slightly under gauge, using size 4 US needles. Instead of picking up one stitch at the beginning of the thumb, I picked up two. In fact, I picked up two stitches together and knit them as one and another two and knit them as one. Then on the next row I knit those two stitches together. That worked well to pretty much eliminate those pesky holes at the base of the thumb. My size called for 13 stitches in the thumb gusset. I knit until I had 15 stitches. The result is an excellent-fitting mitt that’s a tad long (5.5 inches, as the pattern directs) to the start of the thumb gusset.

I really like these mitts. I know I’ll wear them often, though probably not while reading. 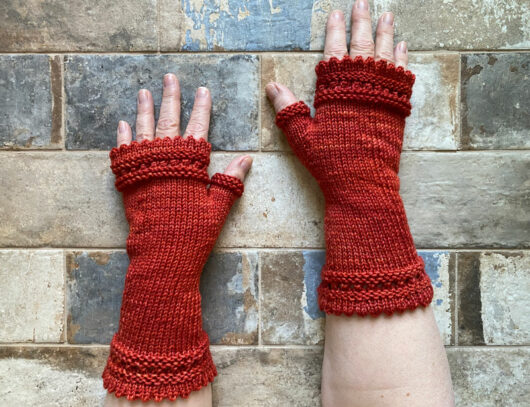 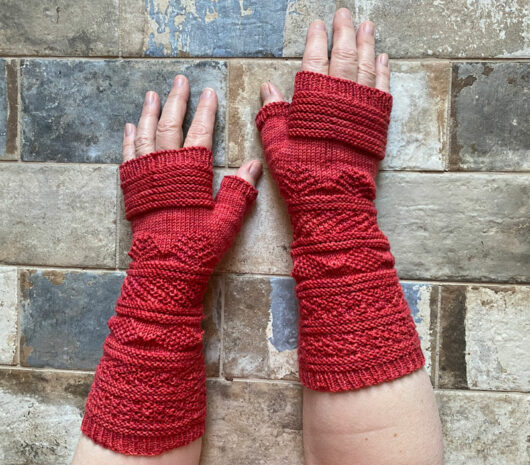 These mitts are a foray into the slow knit movement. It was fun. I used US needle sizes 1 and 1.5. I wanted the mitt to cover more of the hand so after round 116 I added 16 rounds of knit 2 rounds purl 2 rounds. And for a longer thumb, I knit 10 rounds (rather than 6) before starting the ribbing. The top of the thumb, elongated this way, came out a tad wide because there are no decreases in the thumb. If I knit these again I might decrease a few stitches about half way through the added thumb rounds. But the mitts are still a great fit. 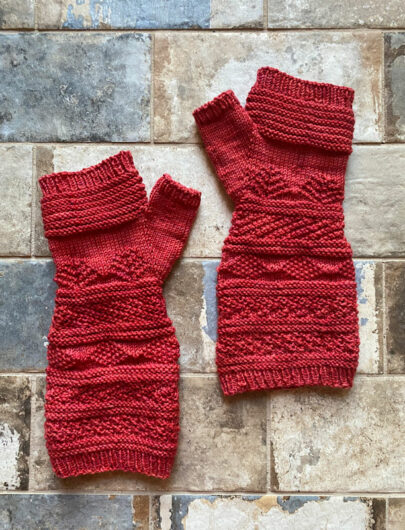 These next mitts you’ve seen before: Alicia Plummer’s rather barrel-shaped Raw Honey mitts. This time I used a new-to-me yarn: Berroco Lanas. Berroco says it’s a “special blend of South America wool.” It’s good worsted weight yarn. I found it at a wonderful price point at Fillory Yarn a few months back. 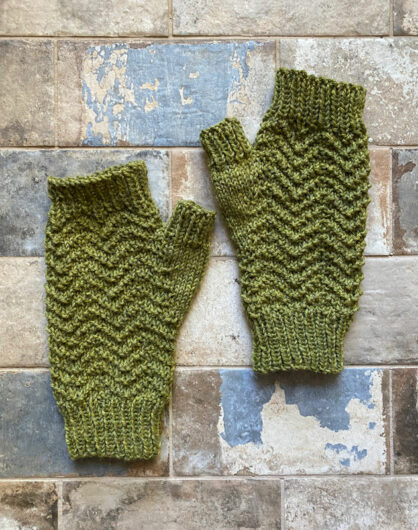 Raw Honey is a roomy fit on most hands. But that’s OK by me. The chevron pattern is an easy knit that looks complex but knits easy. 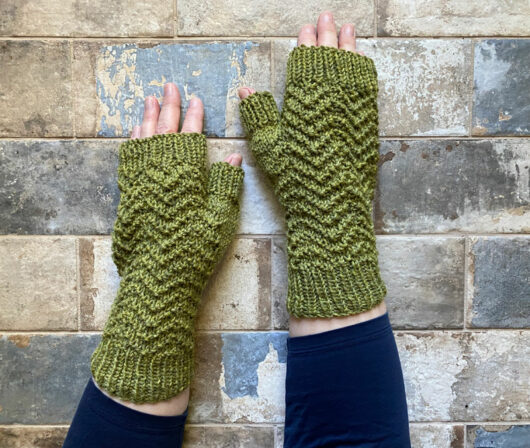 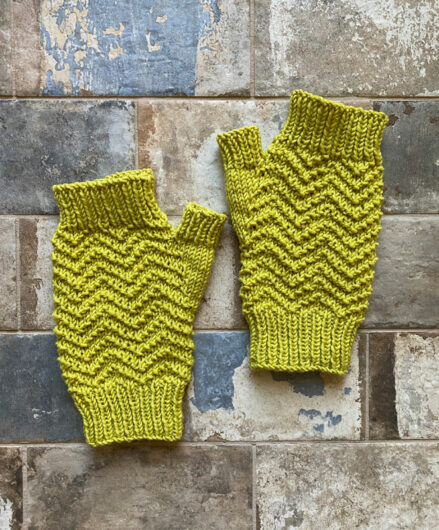 For this pair I used the now-discontinued Sugar Bush Yarns Bold. Wear this pair while you’re directing traffic. Yep, “Clover” was that bright of a shade. 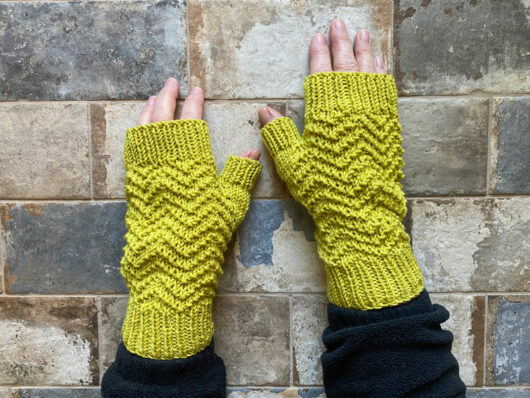 For the next two pair of mitts I gave myself a yarn chicken challenge. Would I or would I not have enough yarn in one skein of Malabrigo Rios to knit two pair of fingerless mitts. And the answer is…”Yes.”

First is another in a long stream, actually 12, of  Fetching(s) I’ve knit. At 21,274 project pages on Ravelry, Fetching is the most-knit pair of fingerless mitts on the web. Inquiring minds want to know what’s the second most-knit pair? It’s Susie Rogers Reading Mitts. Fetching is a free pattern published on Knitty and designed by Cheryl Niamath. I made zero modifications to the pattern. It used up 46 grams of yarn (96.6 yards) of my 100 gram skein of Rios. 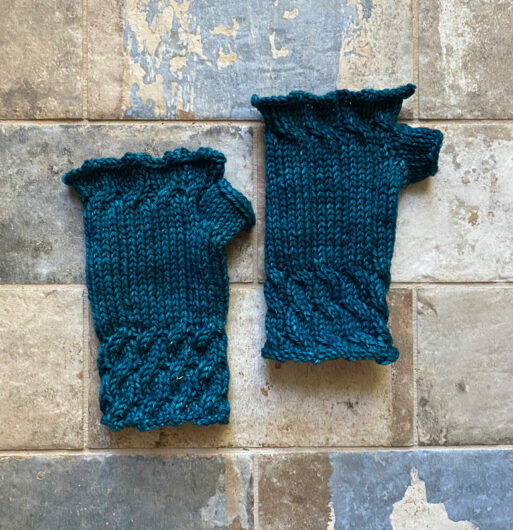 Jessica Ayr’s Narragansett Fingerless Mitts was even a more dainty yardage gobbler than Fetching. All it needed was 44 grams (92.4 yards). 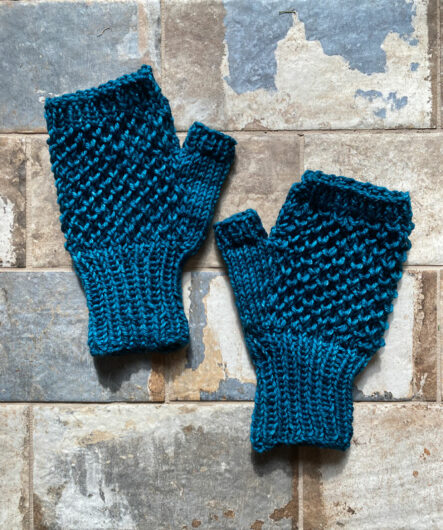 Narragansett mitts use what I think of as “cheater” brioche. I am not casting aspersions on brioche or trying to elevate it by dubbing it a cheater stitch. However, despite buying Nancy Marchant’s first book and her Craftsy class and taking an in-person brioche class from Olga-Buraya-Kefelian, and even though these designers are excellent teachers, I haven’t been able to learn brioche well enough to fix mistakes or use two colors of yarn. True Confessions time.

But I can manage this mitt’s knit-in-the-row-below kind of brioche. It’s still very difficult to fix mistakes. But the stitch is easy enough that I can keep my head together and power through it. As with all brioche, it’s the texture of the stitch that commands the knitter’s and wearer’s attention. Ayrs’s pattern is an excellent and fun knit. Give it a try. If you are brioche-impaired like me, tell yourself that it’s not real brioche.

100 grams of yarn, two pair of mitts. I even have 17 yards left for my Rios oddments bag.