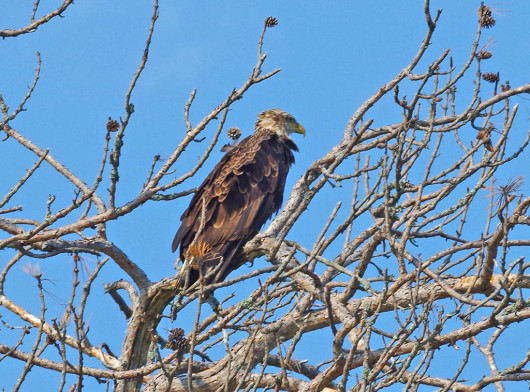 There were rumors of a Golden Eagle on Long Lake. Our suspicion is that it’s really this immature Bald Eagle, photographed here at the top of  a dead red pine on the northern end of the lake.

Adult Bald Eagles wouldn’t be mistaken for Goldens. Adults aren’t bald, of course, but their white heads might look a bit like that at a distance. And they have distinctive white tails with dark brown bodies and wings. Immature birds, like this one, are mostly dark, with bodies and wings that are mottled with white.

It takes a Bald Eagle about five years to reach its mature plumage. This one looks a tad depressed that the process is taking so long. 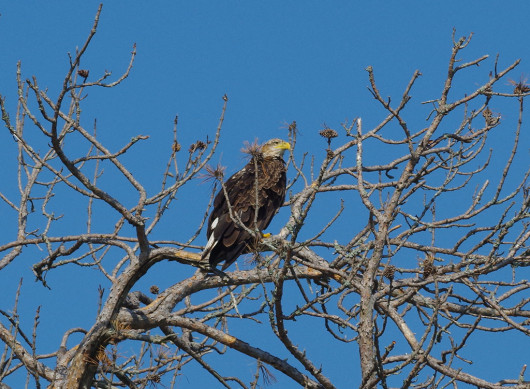 Definitely no beauty yet. Maybe the juveniles being so pokey about getting impressive plumage is what made Benjamin Franklin want the wild turkey as our national symbol. 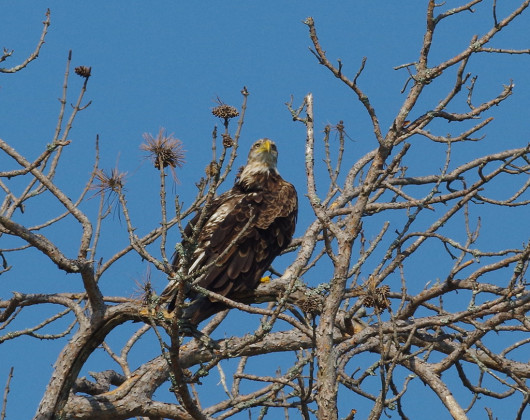 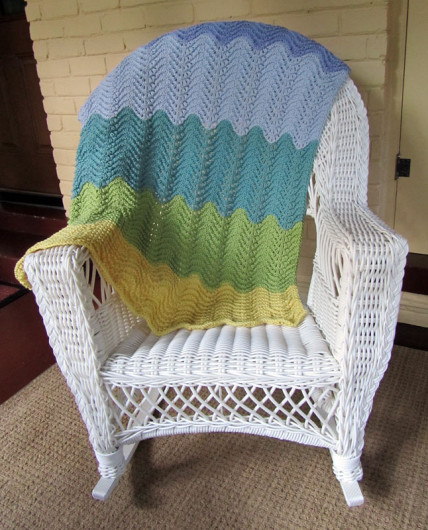 My blanket is a modification. It uses 5 colors rather than the 7 that the pattern calls for. The missing colors are tan and white. They’re supposed to be added onto the yellow end of the blanket. I wish I could say that modification was my plan right from the start. But I have to ‘fess up on that. Hipsky’s pattern is incredibly simple: three choices of sizes and a 4-row repeat to create the feather-and-fan effect. I realized I’d misread the easy peasy direction for my size to knit “six inches or until almost out of yarn” after I was half-way through the second stripe. Um, I knitted until I was almost out of yarn. So my stripes are about 9.5 inches wide instead of 6 inches wide. I’d have had a powerfully skinny long blanket if I’d added in the remaining two colors (four skeins).

But I’m actually quite pleased with the modification. The white would have looked great. But I wasn’t positive about that tan. 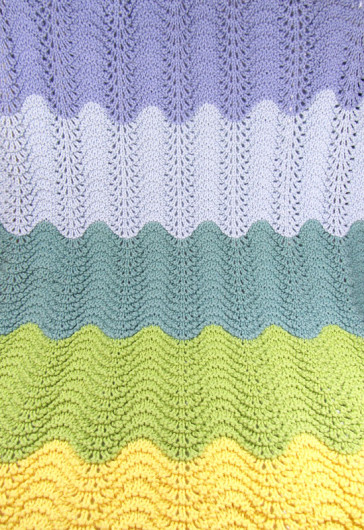 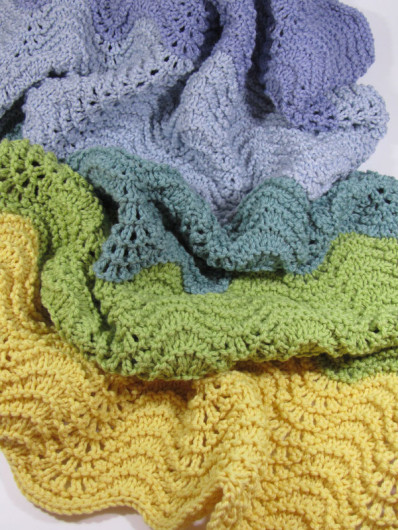 All that remains is to gift my creation to a sweet little one who is still too young to sleep with a blanket. I think a spring-colored blanket gifted in December would be perfect. Evelyn can use it in her carseat or both she and her mom or dad can cuddle up under it while Evelyn is being fed her bottle. 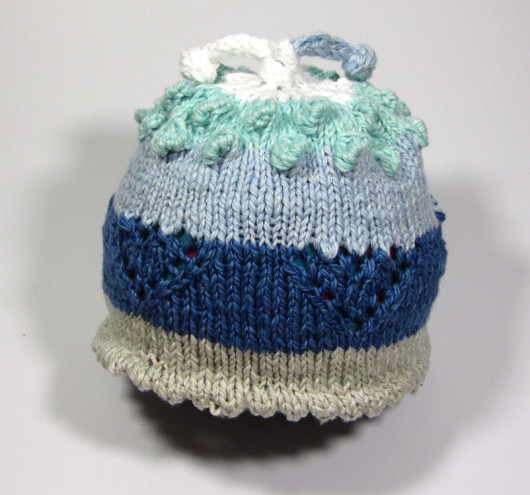 This is Be Sweet’s Sweetie Pie hat, designed by Tanis Gray. It’s sold as a kit. The hat pattern is printed on the inside of the ball band of a skein of Be Sweet Bambino Taffy. The yarn is 70% cotton, 30% bamboo and it’s very soft to the touch. No little tots will complain the hat is scratchy.

I’m a Tanis Gray fan. And I think this hat worked up really cute. But honestly the pattern is a bit of a mess. It’s arranged in a disorganized way. Anyone other than a beginner knitter will figure it out, though. The pattern is printed in ridiculously light ink. Eye strain really shouldn’t need to be part of the deal, Be Sweet!

I made a few modifications. I cast on the recommended 74 stitches, but increased one stitch (to 75) before the heart motif started. That way the hearts, and later the bobbles, are  all evenly spaced. I also modified the puny bobbles and did them this way: (K1, P1, K1, P1, K1) into the same stitch, turn and purl the 5 stitches, turn and knit the 5 stitches, then pass each stitch over the first one, in turn.

Here’s a better look at the crown and my ring of oversized bobbles. 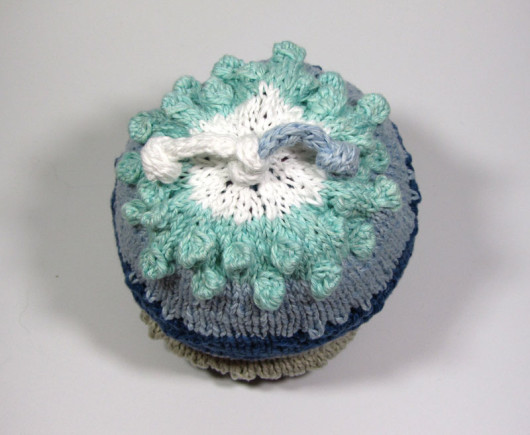 This kit has a surprise in store for the knitter. This isn’t a gradient ball of yarn. Instead, at every color change the new yarn color is just knotted in. Yipes! Of course, I undid the knots and worked the ends in. Erica, one of my guild members, knit this same hat. She said that Russian join worked well for her. 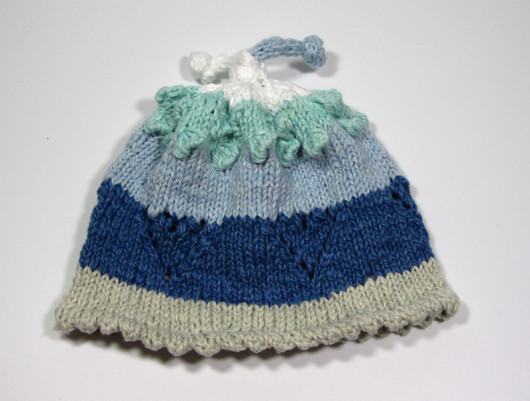 It’s a pretty little thing. Your little sweetie pie will look cute in it. 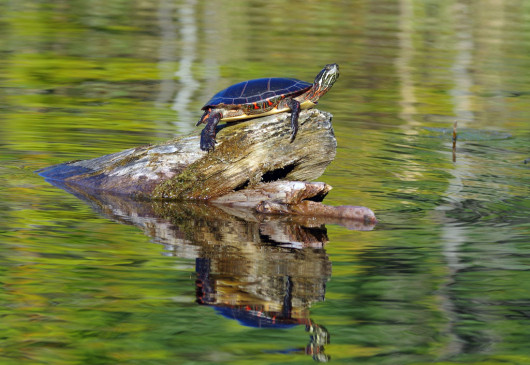 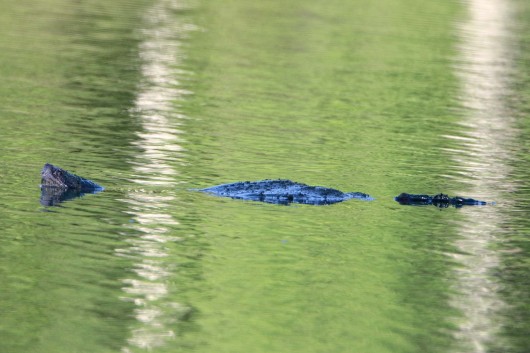 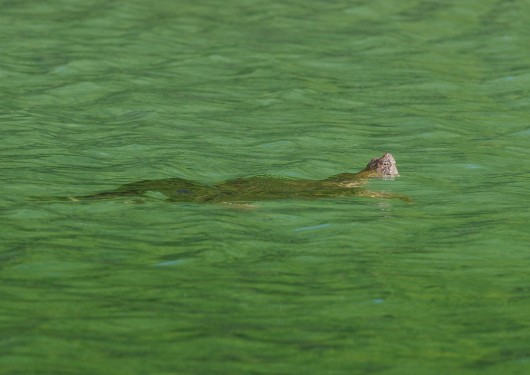 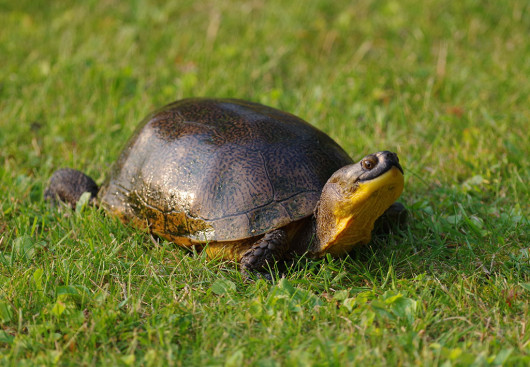 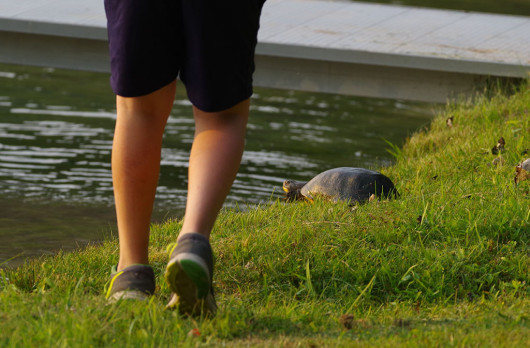 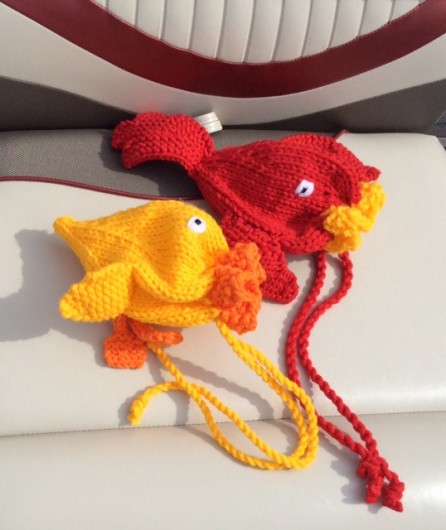 These pint-sized purses are both knitted from kits by Arlene Williams a/k/a Quanah for Yarn. You must be getting quite put out with me and my discontinued patterns. I acquired these kits during a Black Sheep Knitters Guild swap at our May meeting.

The patterns were publicized on the old KnitList, a listserv that many knitters participated in during the pre-Rav times. Its heyday would have been the early days of the consumer version of the internet when knitters first moved on line en masse. Quanah was a cat. You can read Quanah’s 13-part story on Williams’s website. He’s named after the Commanche chief, Quanah Parker. But, Quanah’s story has nothing to do with knitting little bags that look like birds.

Here’s a closer look at The Yellow Duckie Bag. 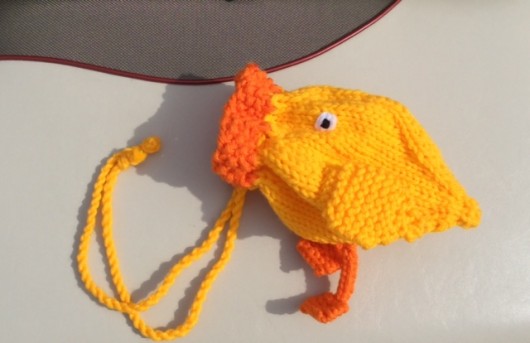 It’s about 6 inches high (not counting the webbed feet) and 6.5 inches long. I figure there’s a little kid somewhere who will appreciate the cuteness and the usefulness of this bag. My favorite part are the feet.

Here’s a closer look at The Bird Bag. 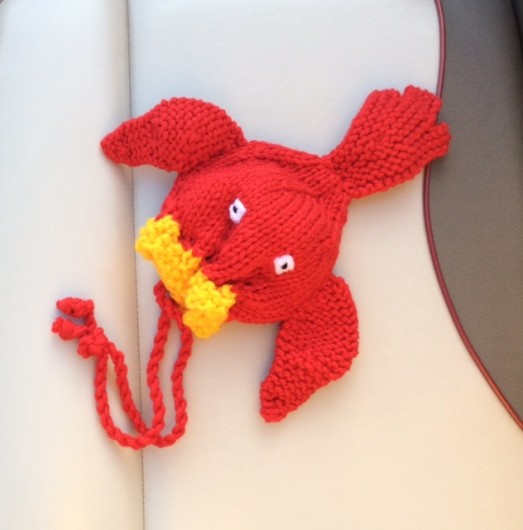 I think he’s a cardinal. Well, a redbird of some sort. (That’s my story and I’m sticking to it.) It has been a bit over-interpreted, I’d say. But I like it anyway and a pre-schooler might find it the perfect place to carry important small things.

Here they both are, just hanging around on our pontoon boat’s canopy support. 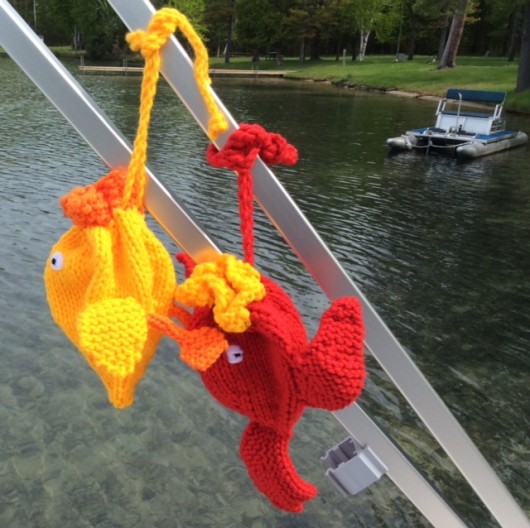 If you decide you’d like to give these patterns a try, the free pattern for the Bumble Bee and the Frog purses that Williams posted to the knitlist in the middle 1990’s is archived here, courtesy of the WayBack Machine. Give one of those a try, and my guess is you’ll be able to reverse-engineer a yellow duckie or a redbird. 16 Ravelers have posted their versions of frog or bumble bee. Very cute.