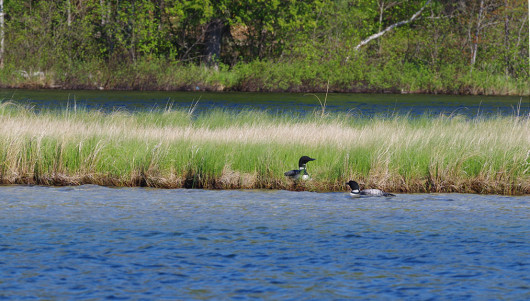 This pair of Common Loons is nesting on the west side of the island that’s near the public access. Kudos to them this year for picking a pretty good spot. Usually the nest is on the east side of the island, where there’s a constant flow of boats coming and going. This island is close to the shore. So it seems like a determined dog or raccoon with a taste for eggs could wreck havoc on the nest. But it’s been a successful spot for them in the past. Once the eggs are laid, and there will only be 1 or 2 of them, the chicks hatch in 26 to 29 days.

Long Lake’s “Loon Ranger” has set out a buoy letting everyone know to steer clear of the nest. Loons need us to leave them alone while they’re nesting. If loons are poking their head up from the nest in an alert position, or if they are squashed down with their head low to the water–those are signs we’re too close. And if they leave the nest or if their mate is nearby vocalizing, they’re telling us to move further away.

Long Lakers are pretty good about giving “our” loons lots of space to do their thing. And we pretty much do what’s right. But, just in case you need to remind anyone to leave the loons alone, they are migratory birds and that means they’re protected by the Federal Migratory Bird Act. The Act prohibits the harassment or killing of loons or chicks (or messin’ with their eggs…OK, the Act doesn’t put it exacty that way). It’s also illegal to possess loon feathers, eggs, nests, or entire birds.

The male loon selects the nest site. He may select the same nest the pair used the year before, just spruced up a bit. The pair will build the nest together, usually in late May or early June. They’ll mound up dead plant material and then smooth out a bowl shape with their bodies. The nest will be right on the water’s edge so that the loon can basically have an underwater approach to the nest.

This next pair was busy building their nest in Ghost Bay on May 24th, just north of the beaver lodge. They were both pulling up mouthfulls of gunk and weeds from the lake bottom and tossing it on the shore. You can see one of them with his beak stuffed with foliage. But they seem to have abandoned the effort. It really wasn’t the best spot anyway. Hopefully they will find their way back to Belly Button Island, where so many loons have successfully nested in the past. 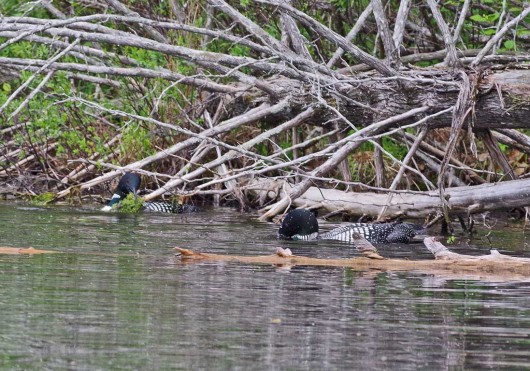 We’re hoping this second pair of loons get their nesting act together soon.

And let’s not talk about the Canada Geese. We spent the weekend chasing them off our lawn. Three pair. One with two goslings left from their brood. One with five goslings growing like a house afire. And one pair with twelve (that’s not a typo) twelve goslings all in full eat-the-grass and poop-out-the-green-tootsie-rolls mode. We’re bringing out the coyote decoy. But it won’t work. It never does. Still, I keep trying. Headley, the gator decoy never worked either. This past weekend, I tried barking at them from inside the house. Good thing our immediate neighbors weren’t around to hear me. 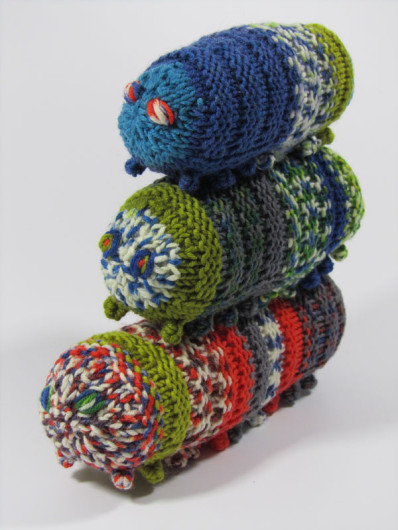 This is my DK weight version of Miranda Harp’s Army of Caterpillars. Harp blogs at toughbirdknits.  Her original is a stacking set of 5 caterpillars in worsted weight. My stack of three in DK weight are shrimpy by comparison. They are knit in three shades of Schachenmayr Merino Extrafine Color 120 left over from other projects. I think what mine lack in size they make up in attitude. 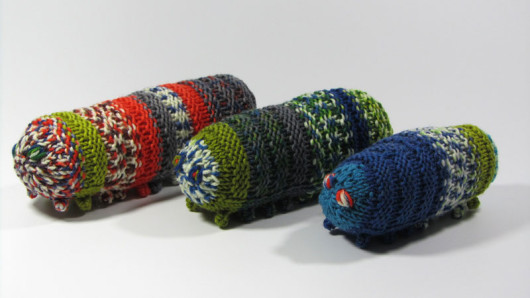 They look like the kind of caterpillar whose coloring advertises “eat me at your peril.”

It’s the bobble feet that help these guys stack. 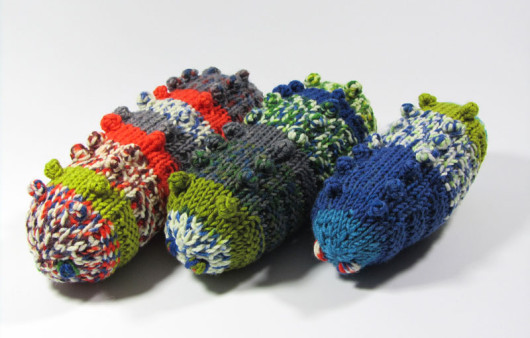 Isaac likes them. His dad, my son, opened the package I sent and wondered why I was knitting tuberculosis bacilli. Ugh, he’s right. (Click if you don’t get queasy looking at such stuff.) 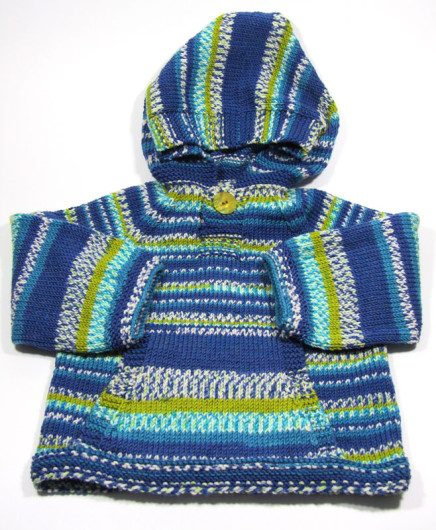 This is Doreen Marquart’s “Comfy Hoodie” from her book Grammy’s Favorite Knits for Baby. That title is a hint about who, in my family circle, has been wearing this hoodie during chilly spring weather. Isaac likes it! There’s a pouch for stashing little toys. It’s oversized, with room to grow. A definitely successful knit.

It’s possibly the yarn that makes this bottom-up Cottage Creations Wallaby clone really stand out. Marquart’s pattern is designed for DK weight (instead of the Wallaby worsted weight). And it’s sized for 6, 12, 18, and 24 months, which includes smaller sizes than the Wallaby.

I knit my hoodie in Merino Extrafine Color 120 by Schachenmayr original, in the Amsterdam Mix colorway. It’s a superwash, self-striping, 8-ply wool. The yarn has a wonderful bounce to it and knits up very evenly.

I knit my 24 month size at 6.5 stitches per inch rather than the 6 stitches per inch the pattern calls for. The fabric felt better to me at that gauge and Isaac didn’t need the 24 month size yet. I used 733 yards rather than the 455 yards that the pattern calls for. Hmm. It shouldn’t have needed that much more yardage. A few other Ravelers have commented on running out of yarn. Good thing I had an extra ball on hand. There was enough left over to knit that…that thing sitting on the hoodie’s shoulder. More on my Army of Caterpillars in the next post. 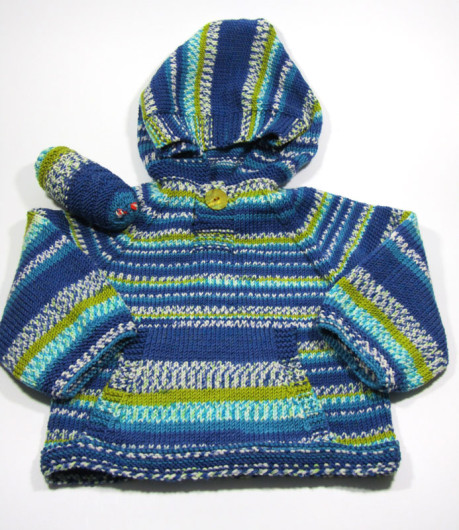 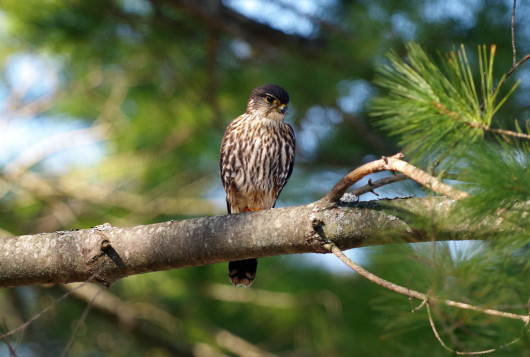 We noticed this guy when he swooped down to the seed-feeder and then chased after a chickadee. We definitely root for the little chickadees and, in fact, think they should be our state bird since they don’t bug out in the winter like the Robins do. The chickadee escaped unharmed.

The Merlin sat on this branch in a nearby white pine, focused on our feeder pole. All activity ceased at the feeders. No chickadees. No nuthatches. No finches, even though the feeders had been Grand Central Station before the Merlin arrived. The Merlin sat on the branch for about 10 minutes. Around then, a Blue Jay started pestering him. The jay flew very close to the Merlin, landing on either side of him on the same branch. The jay seemed to hit the Merlin at least once. Apparently, with his “cover” blown, the Merlin decided to go find better hunting grounds.

We initially misidentified this Merlin as a Sharp-shinned Hawk. The two birds are similarly sized, and do look somewhat alike. But, apparently, the Merlin’s mustache stripe is a give-away. Sharpies are not mustachioed. And they have a longer tail and a less elongated body. Merlins are small birds of prey–ranging only between 9.5 and 11.5 in length.

According to the Cornell ornithology website, Merlins have two modes: scanning areas patiently from a tree, and flying at top speed in pursuit of small birds. We were fortunate to see both modes. Merlins are known to hunt in pairs at times. One Merlin will flush a flock of waxwings and the other comes in for the kill, taking advantage of the confusion.

When nesting, Merlins are squatters. They use an abandoned nest from a crow, raven, hawk or magpie.

Sally sells seashells by the seashore.
The shells Sally sells are surely from the sea. 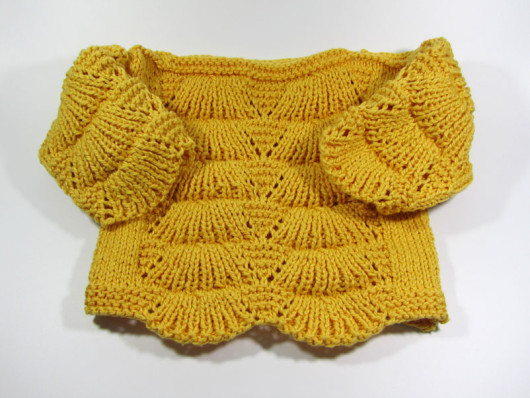 Well, actually, Sally doesn’t sell these Sea Shells, Deborah Newton does. It’s her pattern for “Sea Shells Cotton Striped Pullover,” included in “Heirloom Baby Knits.” The book cover says “24 classic designs refreshed for today’s tots.” This one’s been refreshed to recommend Blue Sky Alpaca Worsted Cotton. I happened to have some in my stash, so that’s what I used.

Blue Sky Alpaca Worsted Cotton has no alpaca in it. It’s a 2-ply twist, 100% certified organic cotton. Even for the wee babes, I’m not rabid about organic fibers, but this yarn is very nice to work with. And my purchase had absolutely nothing to do with the fact that, when a local yarn shop closed, I picked up 4 skeins at half off the typical $14/skein price.

This particular yarn is not the best choice for a new babe because the yarn requires hand washing. But since my yet-to-be-born grand daughter is never going to spit up, I’m sure hand washing will not be an issue. Hmm. Maybe I should gift this one accompanied by a few return envelopes addressed to me so I can relieve baby’s parents of the washing chore.

You are probably thinking my stripes in this Cotton Striped Pullover are a tad subtle? I only bought “dandelion” at the sale. So the 3-color stripes that line up with each “fan” change made way for a uni-color version.

This is a pretty hefty weight sweater for a teeny one, even in cotton. But I’m still quite pleased with it. Coming or going, you’ll like this one, since the back and the front are exactly the same. And if a grand daughter spits up on the front, you can twirl the sweater around and she can spit up on the back before you need to hand wash it. 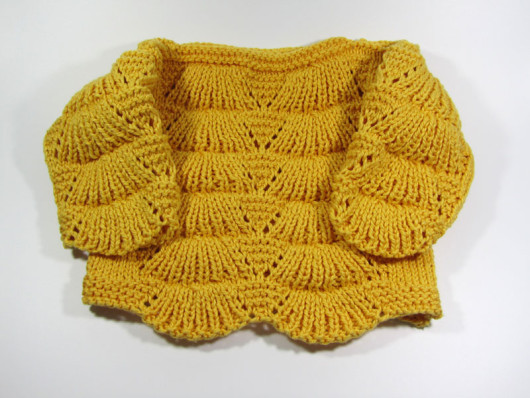