Well, not completely. These are more hat projects, but this time for the smallest head in my neck of the woods. 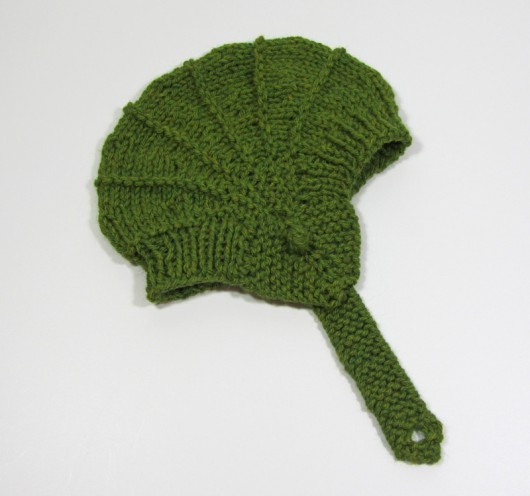 This is Aviatrix Hat, a Justine Turner design available on Ravelry in English, Swedish and Polish. As of early March 2014, 8031 Ravelers have posted a completed Aviatrix on their project page. It is a very cool pattern, generously offered free.

I’ve been pondering buttons on baby clothes recently, now that Isaac is almost 5 months old. So, I decided to do a nice beefy bobble instead of a button. Not the best solution, but not the worst either. Since it’s for Isaac, I should rename mine the Aviator Hat.

At first, I used a basic wrap and turn short row. The wraps were unfortunately way too visible. I started over with Cat Bordhi’s short row technique: part 1 and part 2. Honestly, for me, the wraps didn’t look much better using her technique. The wraps on the purl side seemed to do me in.

But I really like this little hat and decided to try again. My new brainstorm was that the short row wraps would not look so messy in a heavier weight yarn. My green Aviatrix is knit in Berroco Vintage Worsted, a rather lightweight worsted. So I tried again, this time in Lion Brand Martha Stewart Craft Extra Soft Wool Blend. 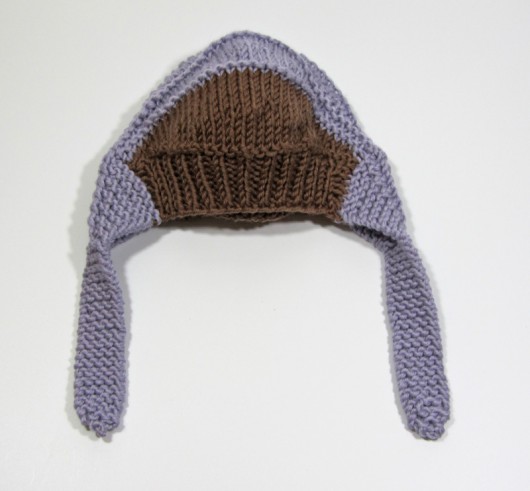 This one turned out a tad better. The wraps don’t look as much like newbie knitting. Running out of brown yarn didn’t help the overall effect, though. 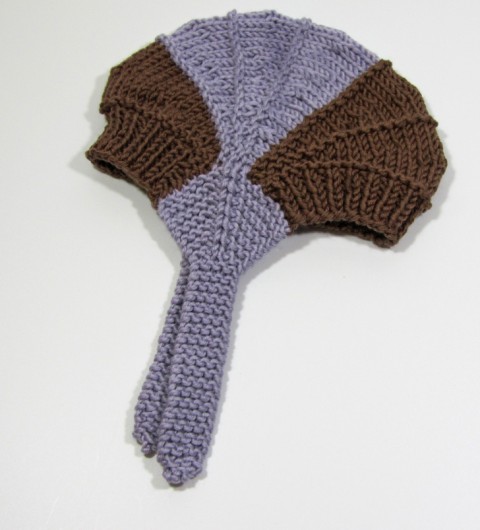 This time I semi-solved the baby-clothes-with-buttons problem by knitting two ties instead of one and lengthening them both a bit so the hat can be tied under the chin. And, actually, the purple and brown is not a horrid combination after all.

This next cutie is part of Doreen Marquart’s Tri-Color Ensemble from “Grammy’s Favorite Knits for Baby.” 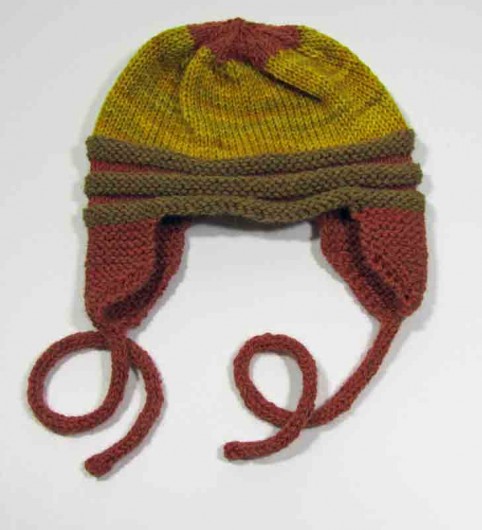 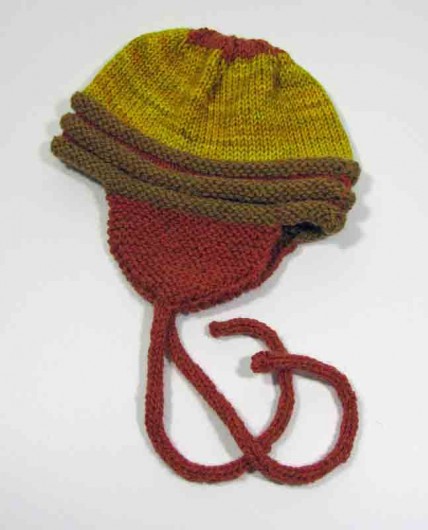 It’s knit with leftovers. The rust and brown are Berroco Vintage Sport and the gold is Madelinetosh Tosh DK in the candlewick colorway. All washable and easy care. I had small bits of the Tosh DK left–enough to work up the mitts part of the set. 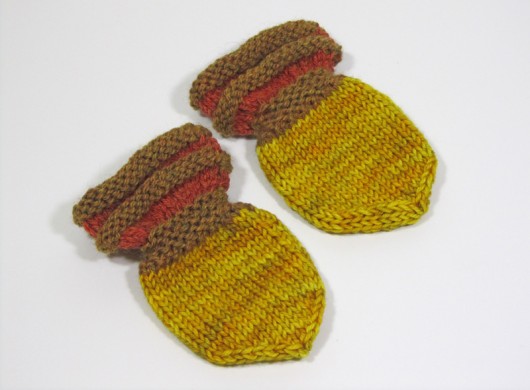 I like the real-life, untraditional baby colors of this set. The pattern is accurate, sensibly laid out, with no errors. The color and stitch changes keep it interesting. This will be a pattern I’ll return to. 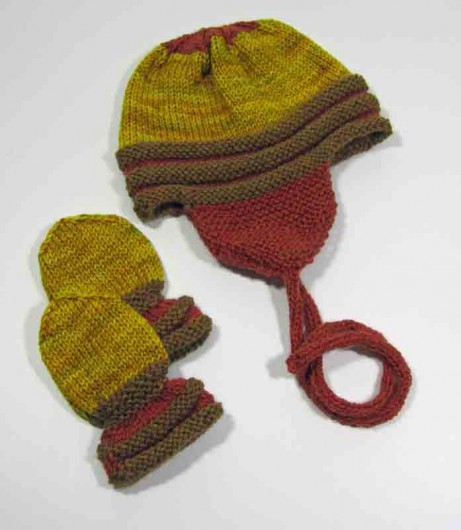 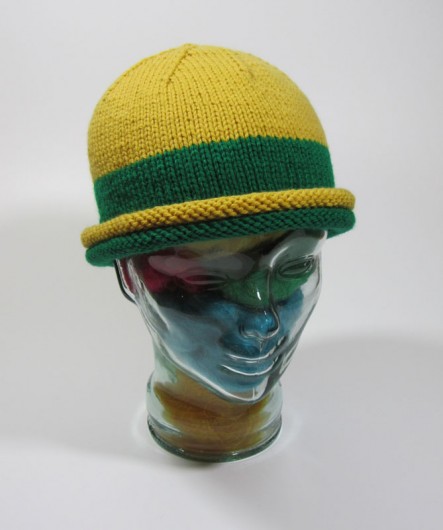 Since I come from Lions country, I will pretend that these are not Packers colors. This is a Fiber Trends pattern: “School Colors Hat AC-53” by Betsy Lee McCarthy. It just so happened that my young friend chose these two colors. This is easy care Berroco Vintage worsted, a 50% acrylic, 10% nylon, 40% wool mix, in holly and sunny.

The cap has a cute double roll brim construction and a crown that forms nicely around the head. No pointy top here. 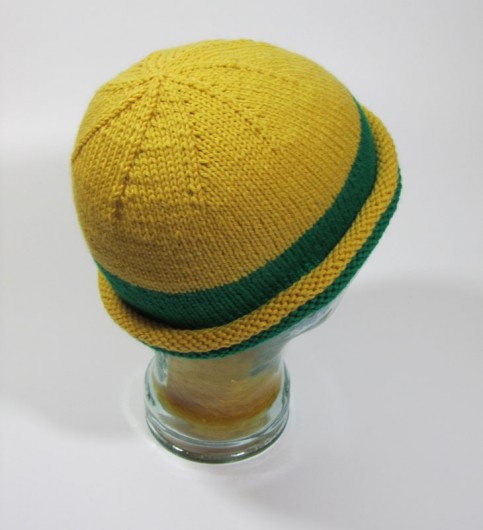 The next two hats are the two versions of Jumping Jacks by Anne Russell. My copy of the pattern is included in “Kids Knitted Hats” by Leisure Arts. The pattern is excellently set out. I especially like that the charts are super-sized. The only error was that the hat didn’t need 10 ounces (918 yards) of yarn to knit. No surprise on that one. It actually took about 185 yards. This is the larger Jumping Jacks, with extra bands of perrie that lengthen the hat. It’s knit in electric bue and sunny Berroco Vintage Worsted. It was supposed to be sized for a 4-7 year old. 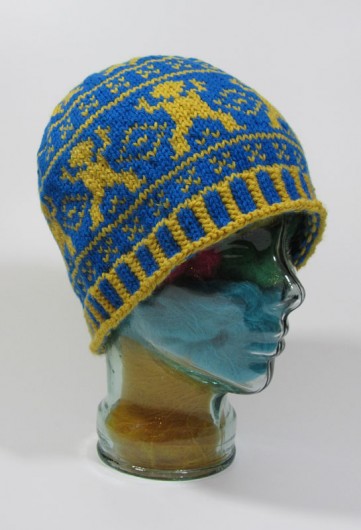 I checked gauge first, and all I can say is I must have goofed. The 4 year old this was supposed to fit would fit into this hat when he’s 18 or so. I really like it, though, and have claimed it for my own.

Jumping Jacks was a special request, so I made it a second time and this version fits the planned recipient perfectly. 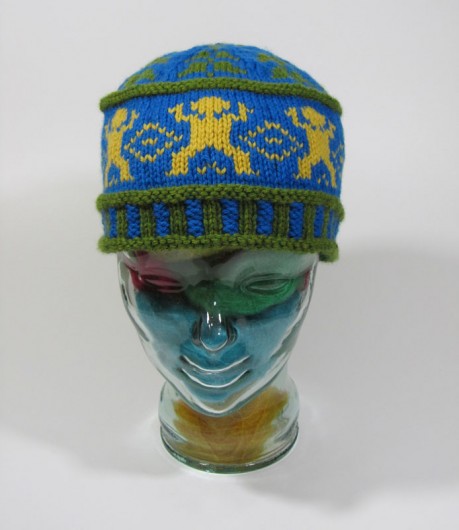 I knit the small version, which leaves out the perrie motifs. My modifications, mostly to accommodate that I was running out of sunny, were: (1) change to 3-color (adding in Vintage in some fennel leftovers), (2) add the fennel (green) purl ridges above and below the jumping jacks, and (3) add two rows of blue above and below the jumping jacks, to increase the depth of the hat. 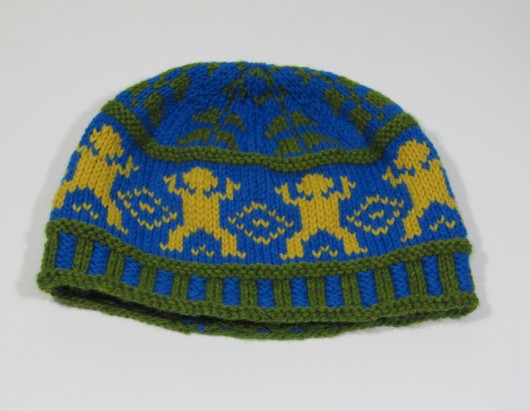 As for my inspiration on these hats? This little guy chose the patterns and the colors and yarns he wanted. All that was left to me was the knitting! 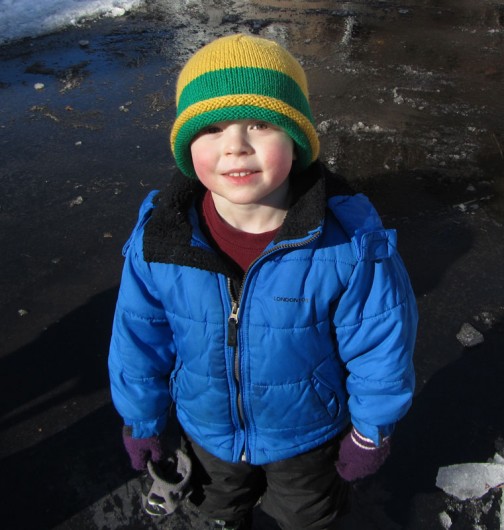 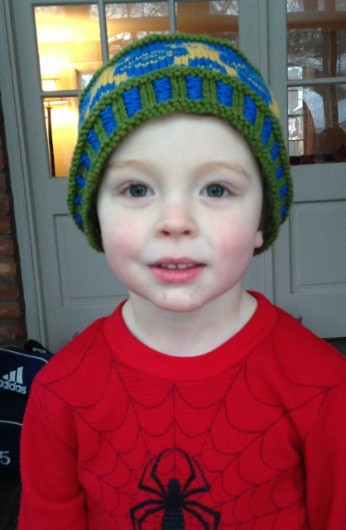